It’s time for the big night and in this show’s case, that means really big, as we have a whopping fifteen matches on the card. That alone is going to make this a busy night, but the question becomes what happens in the main event. CM Punk is challenging Jon Moxley despite having a bad foot as of last week. This could go in a few ways, and I’m not sure how well it is going to wind up. Let’s get to it.

The rise of Jeff Hardy continues as we are less than two weeks away from his showdown with Randy Orton at the Royal Rumble. You can feel the momentum building and Hardy feels like he could actually pull off the miracle win. Why the Intercontinental Champion feels like such an underdog is beyond me, but we should be in for more of him tonight. Let’s get to it.

It’s the first Raw of the new year and we’re starting big with Raw Roulette. The show will basically be a bunch of Spin The Wheel Make The Deal matches and that should make for some interesting options. I say should because it probably won’t, but at least they’re doing something. Oh and there will be a lot about Ric Flair, because we need to do that as often as possible. Let’s get to it.

We’re wrapping up the year with this one as Raw is back to a regular show after last week’s Tribute To The Troops. There is a big main event set up for this week as Ric Flair is defending his career against HHH in one of his most famous locations. That’s quite the way to finish off the year so let’s get to it.

We’re past Armageddon now and the big Raw story was JBL getting physical for the first time in a long while as he cost Chris Jericho the World Title. That means Randy Orton needs a new challenger and that is exactly what he has in the form of Jeff Hardy. The Royal Rumble is coming up, but so is the end of the year so let’s get to it.

We’re at the final Dynamite step before Forbidden Door on Sunday, which could be quite the rough night. Bryan Danielson is making an announcement about his future and it might not be the best news. Odds are we get some more matches announced for Sunday as well so let’s get to it.

We are less than two weeks away from Forbidden Door and a bunch of matches were added to the card this week on Dynamite. I doubt that we get that much this time, but we do get Jade Cargill vs. Willow Nightingale. That should be a fun match and odds are we get something else on the same level. Let’s get to it.

We are less than two weeks away from Armageddon and the Raw main event seems to be Chris Jericho vs. Randy Orton for the Raw World Title. Other than that, we have HHH vs. Jeff Hardy and odds are that is going to get the majority of the attention this week. I’m not sure what that is going to entail but let’s get to it.

It’s Double Or Nothing weekend and that means it is time to get in the last Dynamite before the pay per view. Therefore, we nee to find out who will be in the finals of the Men’s Owen Hart Foundation tournament, which should make for some interesting action both tonight and on Sunday. It’s also the third anniversary of the first AEW show so this should be good. Let’s get to it.

We are less than two weeks away from Double Or Nothing and now it is time for the card to really get hammered home. This time around, that only includes one Owen Hart Tournament match, which seems like a drop compared to recent weeks. The Blackpool Combat Club is here though so let’s get to it.

It is pretty rare when you have a true one match card but that is what we have here, as Batista is defending the Smackdown World Title against the Undertaker inside the Cell. There might be a few other things going on here, but that has been treated as the be all and end all of the show, as it should be. Let’s get to it.

It’s the go home show for Survivor Series and the show is mostly set. Last week’s show was some weird offshoot that didn’t do much to make me want to see Survivor Series, but at least the pay per view looks good on paper. That could make for an interesting week here so let’s get to it.

I’m not sure how but we’re less than a month away from Double Or Nothing. Last week’s show saw the announcement that CM Punk would be challenging Hangman Page for the World Title at the pay per view so at least they have the top match set up pretty far in advance. Let’s get to it.

We’re done with Cyber Sunday and on the way to Survivor Series, which means things can get a bit more back to normal around here. The big Raw story was that Randy Orton retained the WWE Title over Shawn Michaels after getting himself disqualified, which means we are probably heading for a rematch. Let’s get to it. 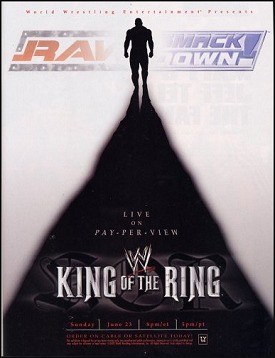 KING OF THE RING 2002:
-So we’re in the 2002 era now- the InVasion was a crushing disappointment, the nWo is here, and most of the big stars have slowed down and Triple-H rules much of the company. The product was ICE FREAKING COLD at this point, with the fans acting like their souls had been cut out. This is also famously the reason Steve Austin bailed on the company for a year or so, as he was booked to job in a short, unhyped match with Brock Lesnar in a Qualifier. Disgusted with the company (and acting COMPLETELY paranoid about his position on the card- he’d been embarrassing all three nWo guys in angles a few months beforehand), Austin went home without notice.

X-PAC vs. GOLDUST:
(WWF RAW, June 3rd)
* X-Pac is in the nWo here, but comes down solo (wearing a Kane mask, because they have an issue AGAIN?), while Goldust has a fake X-Pac goatee stuck onto his face and isn’t over in the slightest, despite being paired up with Booker T, who was an nWo member disliked by the others at this point.

I don’t know why, but something tells me they are going to have a hard time following FTR vs. the Bucks from Dynamite. That being said, they are certainly amping up Rampage this week, as Bryan Danielson and Jon Moxley will both be in action on the show. I’m thinking that’s enough to carry things so let’s get to it.

Things picked back up last week as Shawn Michaels made his return to the show and took out Raw World Champion Randy Orton. That seems likely to be taking us to Cyber Sunday, which is going to need a card set up in a hurry as the show is less than two weeks away. Let’s get to it.

We’re still in Texas and this time around CM Punk is back for a match with Dax Harwood. Other than that we are probably going to hear something from Thunder Rosa after she won the Women’s Title last week in her hometown. If we’re lucky, we might even get more of the Young Bucks trying to find out who their real friends are. Let’s get to it.

We’re done with No Mercy and Randy Orton is the new WWE Champion, having been awarded, losing and regaining the title in quite the rollercoaster of a night. Orton is going to need a new challenger now and that means we might be in for something interesting this week. Let’s get to it.