I did an episode of Thunder last week and realised that the following weeks show was uploaded to a certain video streaming website, which meant it would have the real music and what have you seeing as it was the original airing from 2000 as opposed to the edited and dubbed one on the WWE Network, so I decided to give it a watch as some of the matches sounded interesting.

Let’s see if those matches are indeed interesting or if this show is an utter disaster like Thunder usually was during this timeframe.

I’ve never actually watched this episode of Thunder before but I was reminded of it by recently listening to the audiobook version of The Death of WCW. Modern WWE sometimes reminds me a lot of this era of WCW, so I thought I’d set the way back machine to 2000 in order to watch this episode.

WCW was flatter than a pancake at the time as they were between Vince Russo stints and were mostly focusing on the New World Order of Jeff Jarrett, Scott Hall, Kevin Nash, Scott Steiner and The Harris Brothers taking on Sid Vicious atop the card, whilst the undercard was filled with a lot of feuds and storylines that weren’t over. 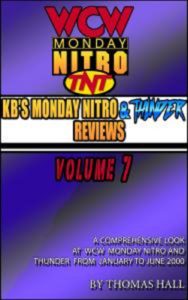 I…didn’t know that was possible. Things are looking very, very down for WCW as they roll into the new millennium. With all of the insanity flying around, it certainly seems that all hope is lost for the company, but that has never stopped any wrestling promotion before. This time around though, it’s not about flying off a cliff but rather crashing down onto the rocks below and seeing how much more damage can possibly be done. As it turns out, it’s quite a bit actually.

In this book, I’ll be looking at Monday Nitro and Thunder from January – June 2000 and try to see just how bad everything was able to get. The shows were a nightmare but somehow it kept getting worse every single week. Each episode will be broken down match by match and segment by segment. Included will be analysis and ratings for the shows to see why the year is remembered so poorly.

The book runs about 385 pages and is available on Amazon both in a physical paperback for $10.99 or an e-book format for $2.99. In case you don’t have a Kindle, there are plenty of FREE apps you can get from Amazon for pretty much any electronic device, all of which are available at this link.

Or if you’re in another country with its own Amazon page, just search “KB Nitro VII” and it should be the first thing to come up.

A comprehensive look back at every episode of WCW Monday Nitro and Thunder from July – December 1999. This is a rather bad time for WCW as everything is starting to fall apart due to a combination of horribly boring wrestling and some rather questionable booking choices. With the good old boys no longer doing the trick, the solution was to bring in the star of WWF Creative: Vince Russo, meaning it’s all downhill from there. In this book, every episode of both shows in the second half of 1999 is reviewed in full, complete with analysis, ratings and complete content included.

The book is available on Amazon both in a physical paperback for $10.99 or an e-book format for $2.99. In case you don’t have a Kindle, there are plenty of FREE apps you can get from Amazon for pretty much any electronic device, all of which are available at this link.

You can pick up the book from Amazon here.

From the UK Amazon here.

From the Canadian Amazon here.

Or if you’re in another country with its own Amazon page, just search “KB Nitro VI” and it should be the first thing to come up.

Also you can still get any of my previous books on the WWE Championship, the Intercontinental Championship, Monday Night Raw from 1997, 1998, 2001 and the first half of 2014, Monday Nitro from 1995-1998, In Your House, Summerslam, Starrcade, ECW Pay Per Views, Royal Rumble, Saturday Night’s Main Event, the WWF and WCW pay per views from 1998, Wrestlemania, WWE Grab Bag and Clash of the Champions at my author’s page here.

A comprehensive look back at every episode of WCW Monday Nitro and Thunder from January – June 1999. WCW is in trouble and there’s not much of a better way to put it. They’re being defeated by Monday Night Raw in the Monday Night Wars, but as any wrestling historian can tell you, that doesn’t mean there’s no hope. Monday Night Raw was crushed for the better part of two years so maybe WCW can come back as well. In this book, every episode of both shows in the first half of 1999 is reviewed in full, complete with analysis, ratings and complete content included.

In case you don’t have a Kindle, there are plenty of FREE apps you can get from Amazon for pretty much any electronic device, all of which are available at this link.

You can pick up the book from Amazon here.

From the UK Amazon here.

From the Canadian Amazon here.

Or if you’re in another country with its own Amazon page, just search “KB Nitro V” and it should be the first thing to come up.

Also you can still get any of my previous books on a ton of wrestling topics here.

We’ve arrived at the final shows. We’ll start off the final episode of the corporate mandate that was Thunder, which has somehow gotten even less important over the years. The big story coming out of Monday is Ric Flair’s face being pressed onto the back of a donkey and the upcoming Night of Champions on Monday. Let’s get to it.

The long nightmare is almost over as we only have two shows left, including this one. This is the final show before Greed and things aren’t exactly looking up. Monday’s show was full of old guys having bad matches and not enough build to anything other than Sunday’s main event. Let’s get to it.

The roll that WCW was on just a few weeks ago seems forever ago as they’re right back to the mostly uninteresting shows that aren’t getting anyone anywhere. Well save for the Steiner Brothers and the other old acts that is. They’re getting closer to Greed and the card isn’t looking great so far and I doubt that changes tonight. Let’s get to it.

I know it’s a bit late to matter but WCW is on a roll at this point. The matches are entertaining, the stories make sense and you can tell the story they’re going with. Diamond Dallas Page is the best option as a challenger for Steiner’s title and Booker T. is clearly the next major threat to the champ. Let’s get to it.

It’s hard to believe we’ve got less than a month to go. The last pay per view is called Greed because the wrestling universe is funny that was. Earlier this week we found out that Diamond Dallas Page was the next challenger for Scott Steiner, mainly because there’s pretty much no one left to do it. Let’s get to it.

This show is the equivalent of going to the gas station and buying your significant other transmission fluid for Valentine’s Day. It’s also the final show before SuperBrawl and believe it or not there’s something advertised for this week. Tonight we’ll be seeing Hugh Morrus/Rey Mysterio vs. Chavo Guerrero Jr./The Wall as two feuds are combined into one. Let’s get to it.

Amazingly enough, we’re coming in off a surprise heel turn this past Monday as Rick Steiner joined up with Flair’s group to reunited with his brother yet again. They really aren’t even hiding the fact that this is another NWO clone and I really don’t think anyone minds at this point. Let’s get to it.

I’m running out of things to say about these intros. We have less than two months to go in this company and it’s most likely a skippable B-show with a main event between two midcarders who don’t have an interesting feud. Or maybe a tag match with two members of a heel stable against a semi-regular tag team. I would offer a suggestion of a great cruiserweight match with two people being elevated to new heights but that’s not the WCW way. Let’s get to it.

We’re still just living in Ric Flair’s WCW as he and the Elite (the unofficial name at the moment) destroy everything in sight, though to be fair it’s more interesting than the Sid Rules The World stuff we sat through for so long. It’s getting closer to SuperBrawl with Kevin Nash getting the World Title shot against Scott Steiner because we’re just that lucky. Let’s get to it.

We’re coming off an interesting show Monday where things have changed a bit yet still feel very much the same. In this case Ric Flair is now all evil for reasons that aren’t clear (and will remain that way because this is WCW) and the remaining faces are fighting against the latest NWO. It’s certainly better than what we’ve been having but I don’t see much of a shelf life for this one. Let’s get to it.

It’s the final show before Sin and things aren’t looking all that interesting. The four way for the World Title has the potential to be an absolute disaster as Sid/Steiner/Jarrett don’t have the best chemistry in the world and it’s just asking for trouble whenever WCW brings in a surprise. The rest of the show isn’t looking great either so let’s get to it.

Happy New Year everyone and welcome to some of the final months of WCW. It’s been a little while since we’ve had anything to actually watch as a few shows were preempted by holidays. Even WCW wasn’t stupid enough to try and have a show on Christmas night so this is a fresh start for them. Let’s get to it.

It’s the final show before the biggest show of the year and the big match announced for tonight is Sgt. Dewayne Bruce vs. Lex Luger. Odds are Sid and Steiner aren’t going to be in the arena tonight because the idea for the match seems to be based on them being apart as long as possible before we get to the pay per view. Let’s get to it.

I’m really not sure what to talk about with this one. As weak as Monday Nitro has gotten in recent weeks it’s almost scary to think about how bad Thunder could get at this point. We’re getting closer to Starrcade and the night of many rematches, which is exactly what I want to see after such a horrible Mayhem. Let’s get to it.

We’re now in the post Stevie Ray era so I’m really not sure how well we’re going to be able to survive. It’s just such a sad world anymore and they might have to just close the promotion to let us heal. We’re rapidly approaching Starrcade and the main event is going to be Sid vs. Scott Steiner because we live in a random and chaotic universe. Let’s get to it.