Welcome back to more Dream Matches! This time we start off with The Goon’s biggest challenge, as he faces the Undertaker during his feud with Vader! Also the time All Japan ran Johnny Ace/Johnny Smith/Wolf Hawkfield vs. a Kamala knockoff and the Headhunters! If you haven’t had enough Wrath from last week’s column, here he is in the “Post-Nash” part of his career, wrestling an Olympic bobsledder! Also a request from Maffew, as Mabel & Doink the Clown wrestle Bam Bam Bigelow & Jeff Jarrett on a Fancam house show!

As always, WWF stuff isn’t okay to post on the blog, but is readily available on YouTube.

THE UNDERTAKER vs. THE GOON:
(WWF, 1997)
* Yes, they really pit these two legends against each other on FREE TV. Can you believe that? I do find it hilarious how much like a 1990s hockey player Bill Irwin actually looked, what with that big hockey hair and his silhouette. I mean, props. Gorilla Monsoon on commentary suggests he needs to be “Ostracized from the World Wrestling Federation”. The canned heat here is ridiculous, keeping things at a long drone at the exact same volume- they’re not even trying. 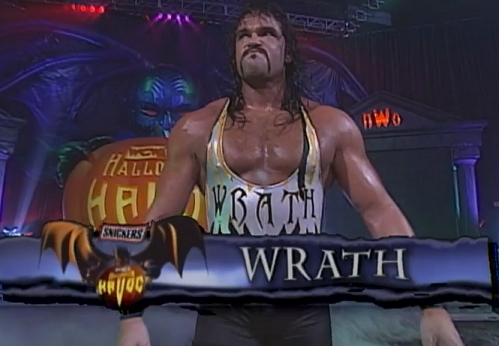 When a five-minute match ends up still being talked about 20 years later.

Welcome back to more Dream Matches! This one features the famous Nitro bout between Main Eventer Kevin Nash and the rising star Wrath! And totally isn’t just an excuse for me to write a mini-column whining about that match and then put up random other weird shit I found to pad it out!

Also here: one of the Headhunters being the hardest working guy in a match involving four former major stars and then-current major lucha acts, plus did you know that Flash Funk and the GOON crossed paths? Well now you do!

KEVIN NASH vs. WRATH:
(WCW Nitro, Nov. 23 1998)
* So THIS turned out to be one of those things that always sticks to Kevin Nash, and is still talked about to this day. So Nash was heading towards his big Title match with Goldberg at Starrcade. Wrath, meanwhile, was getting bigger and bigger reactions for going from a midcarder to ANOTHER Goldberg-style squash artist, just wrecking guys on the undercard for months, to the point where he was getting great reactions. As he was a huge guy who could really move, and had good monster charisma, he was over and he had a lot of potential. Buuuuuuuuuuuut since Goldberg famously had an unbeaten streak, Nash was thought to need to “warm up” by fighting ANOTHER guy with a “streak” going. And so Wrath, in the middle of a hot streak, is booked against a main eventer who can’t afford to lose.

What defines “Dream Match” better than “Jorge Gonzalez versus _____”?

Welcome to more Dream Matches! Including a rarity with Giant Gonzalez actually interacting with other “name” guys. Also more “short-lived gimmicks” as The Stalker (Barry Windham) has to try and oppose the might of THE GOON! A FAT MAN STAND-OFF between Mabel and Bam Bam Bigelow! Yokozuna in New Japan taking on Riki Choshu! And did you know that Sherri Martel did a run in 1981 AJW? Now you do- watch her face Devil Masami!

All of this can be readily found on YouTube.

“MACHO MAN” RANDY SAVAGE & MR. PERFECT vs. MR. HUGHES & THE GIANT GONZALEZ (w/ Harvey Wippleman):
(17.08.1993)
* Here’s a random taped “end of the card” bout, and an AMAZINGLY weird combination, as Macho Man & Mr. Perfect team up once more to take on Giant Gonzalez near the end of his run, and Mr. Hughes, who at this point was the new guy feuding with the Undertaker (was this the first “heel steals the urn” angle? This feels like the first). Hughes is DEFINITELY not as tall as I remember- he doesn’t look much taller than either opponent. Macho’s in his AMAZING super-patriot gear with red, white & blue, while Perfect’s in black & orange, and the heels are in their usual- airbrushed muscles (Gonzalez) and the sharp suit (Hughes).