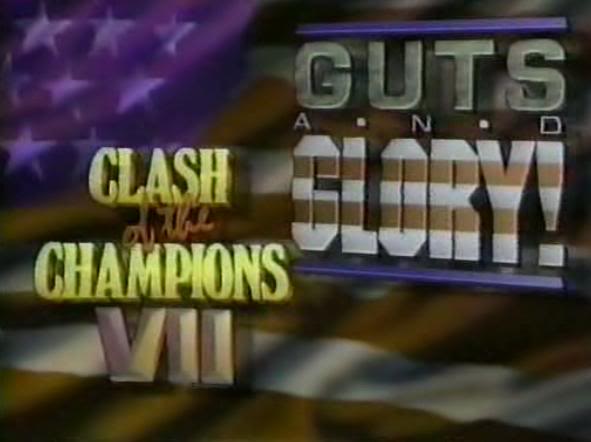 On May 7, 1989, in the third of three spectacular matches, NWA World Champion Ricky “The Dragon” Steamboat defended his title against arguably his greatest challenger— “Nature Boy” Ric Flair. Having defeated Flair at Chi-Town Rumble in February for the title, Steamboat once again beat Flair on April 2 in a 55-minute best two out of three falls classic at the Clash VI. 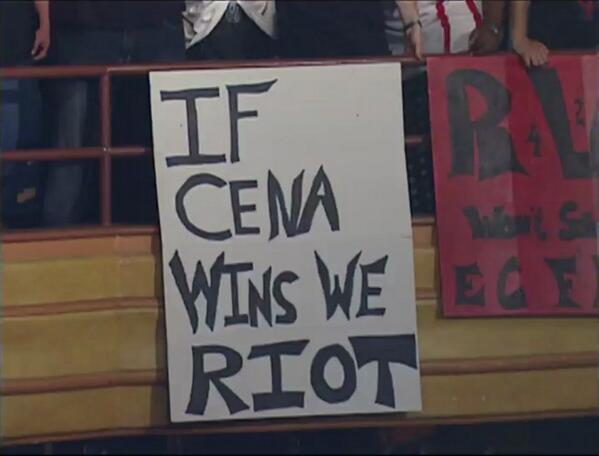 Cold open into a rabid-arse crowd, just like the good old days. The Hammerstein was perfect for One Night Stand, seeing as how 2000-era ECW would do a better job hyping house shows at this venue than their own national PPVs.

This review is sponsored by Kay Jewelers! Thanks WWE Network!

Hogan promises a surprise for the Funks.

Out by the swimming pool, WWF Champion Hulk Hogan mixes a concoction called

It’s the go home show for the Great American Bash and they finally have the main event set as Kevin Nash is going to get a shot at Jeff Jarrett’s World Title. Tonight’s big match is the long awaited Goldberg vs. Tank Abbott showdown. Given that it’s a Russo run show, you never know what changes we might see so let’s get to it.

So Jarrett is World Champion again after losing the title for a full week. The biggest change seems to be Nash moving in to the World Title scene, which is one of the least interesting things they could do, which is why we’re likely to see it happen. This company has to hit a wall soon enough but I don’t want to imagine what has to happen to reach that point. Let’s get to it.

It’s only fitting that I review a show from the Chicagoland area on the night the Cubs advance to the NLCS. Go Cubs!

This review is sponsored by the candy bar Payday. Thanks, WWE Network!

Believe it or not, WCW had a good show earlier in the week to lead into this one. Above all else they slowed things down a bit and are finally acting like something resembling a wrestling company. We’re coming up on Great American Bash and it’s not really clear what the main event is going to be. Ric Flair was scheduled to be challenging Jeff Jarrett for the World Title but that might have been changed to Ric vs. his son David instead. Let’s get to it.

Now this is an interesting show as we’re officially into the Russo/Bischoff Era. They’ve had a week and a pay per view to set everything up so now they have no real excuses left. This is going to be the show where we see what their vision is supposed to be, complete with Jeff Jarrett and the New Blood on top. Let’s get to it.

We’re getting closer to the horror that is Uncensored 2000 and Jeff Jarrett vs. Sid Vicious. Both guys are talented and have their place on the card, but the main event isn’t the right spot for either of them, especially coming off HHH vs. Foley and transitioning into HHH vs. Rock. Other than that, since we’re in North Carolina, you can pencil in Flair for a loss or some sort of humiliation. Let’s get to it.

After Monday it’s very clear that this is the old guys/NWO (assuming you still think of them as the NWO) show. The wrestling has taken a backseat to “let’s see how simple a feud the old guys can put together” and it’s really not working too well. There have been a few glimmers of light with some young guys getting some upgrades lately and hopefully they continue tonight. Let’s get to it.

It’s the night after SuperBrawl and almost nothing has changed. That’s about as close to the truth as you can get here as no titles changed hands, unless you count a tournament final for a new champion. The big story continues to be Hogan/Sting vs. Flair/Luger as we’re back in the earliest days of this show, minus Randy Savage. Let’s get to it.

Well the TV shows have been some of the least interesting things I’ve ever had to sit through, so maybe the pay per view will be the complete opposite and be entertaining. I mean, stranger things have happened right? The main events tonight are Sid Vicious defending the World Title against Jeff Jarrett and Scott Hall in a three way, plus Hogan vs. Luger and Funk vs. Flair because they haven’t replaced the Radicalz, but these old guys are still going to be fighting each other no matter who else is on the card. Let’s get to it.

It’s the go home show for SuperBrawl and the old guys abound. The big stories here are Hogan vs. Luger and Flair vs. Funk, one of which I can’t imagine appearing tonight because he’s worked the last two shows in a row. Other than that we get to find out if Prince Iaukea or Psychosis gets to fight Lash Leroux for the Cruiserweight Title. I continue to beg WCW to hire some fresh talent before too late sounds like great days gone by. Let’s get to it.

It’s SuperBrawl week and you can see most of the card at this point. If you hurry, you can still cover your eyes before your face melts like the Nazi in Raiders of the Lost Ark. The big stories tonight are Hogan vs. Flair and Luger vs. Funk as they mix up the big matches before Sunday. Let’s get to it.