–Steve Austin arrives at the arena and comes across a driver of a Coor’s Light truck.  Product placement 101.

–Michael Cole and Jerry “The King” Lawler are calling the action and they are live from Albany, New York.  This is the last RAW we have to hear called by Cole for a while so I am happy about that.  This is the go home show for WrestleMania XV.

It has been a long time since the World Was Watching appeared here on the Blog.  That was partly due to some career moves on my part and just a general lack of time.  That is solved for the time being, though, so we will head back into 1999.  The last recap ended – somewhat fittingly – with Mankind’s upset title victory over the Rock.  The Road Dogg also defended his Hardcore title against Al Snow out in the snow on the last show and the tasteless Terri Runnels pregnancy angle began with D-Lo Brown.  Needless to say, 1999 will be a combination of some memorable moments and some really wacky Russo booking.

–Michael Cole and Jerry “The King” Lawler are in the booth and they are live from Houston, Texas.

The past two weeks we have spent time looking at
alternatives to WWF Magazine.  We return to WWF Magazine this week, looking at the August 2000 issue.  On the cover is someone who Triple H says is
a very unlikely candidate for the Hall of Fame: 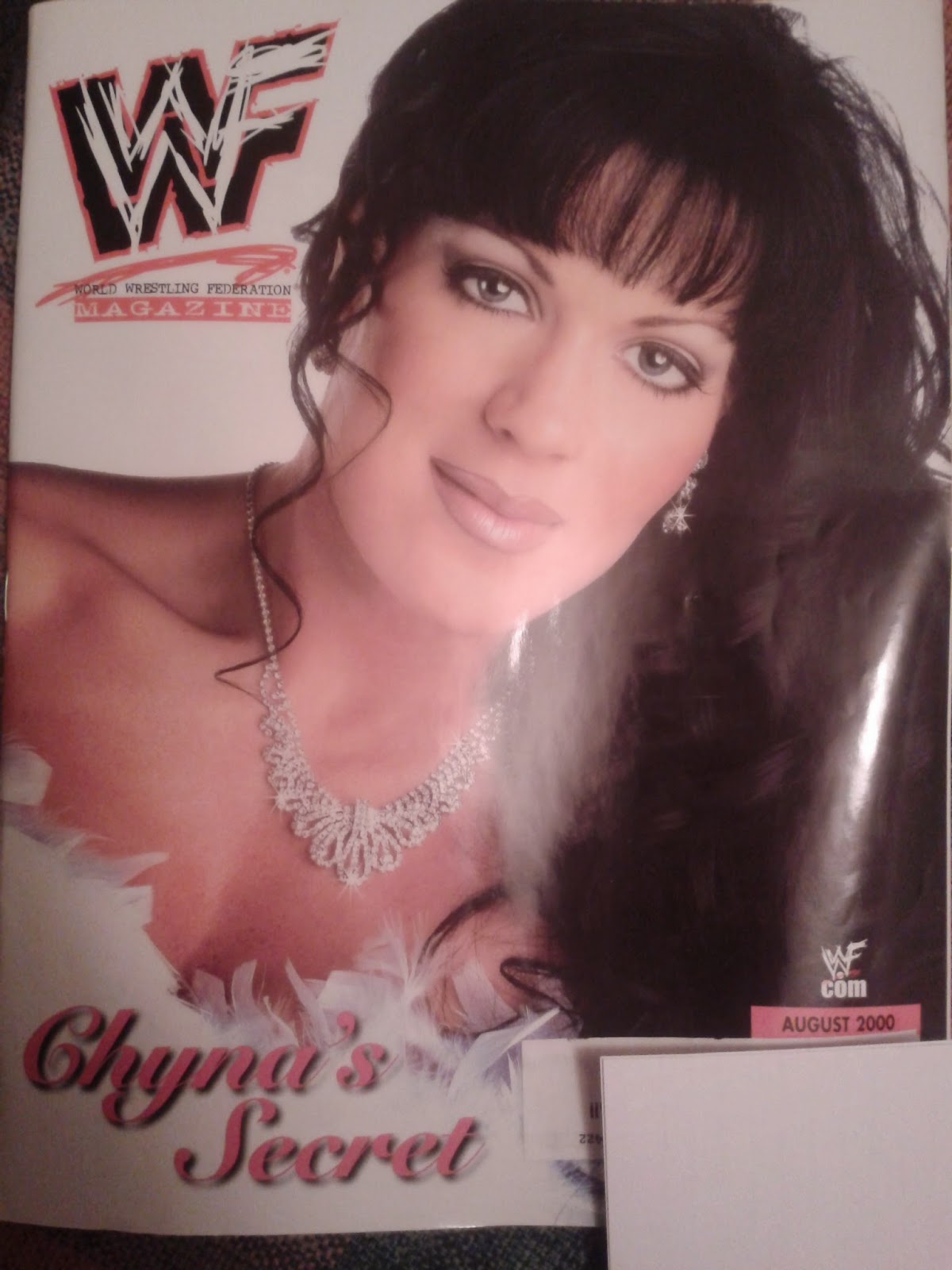 Those who followed the product during the Attitude Era
remember that the WWF gradually tried to make Chyna sexier for viewers.  She started as a serious bodyguard in a role
unlike that of any other woman who came before her (or even since), but then
started wearing makeup and by 2000 the WWF was presenting her as more of a
physically gifted, attractive “diva.”
It should also be noted that our managing editor of the
magazine is no longer Kevin Kelly.
Instead it is a woman named Laura Bryson.  By this point the magazine was a shell of its
former self, at least in my eyes, and the pay-per-view recaps will show that.
In the Letters to the Editor, Dan Hayes writes an angry
letter saying that Lita is not a potential legend since she is just attached to
Essa Rios and is not pursuing a singles title.
Of course, that would change down the road and by the time this magazine
was on newsstands, Lita had ditched Rios and joined the Hardy Boyz.  A few fans write in how they are fans of
Jacqueline and how awesome she is.  And
Rich Coleman writes an angry letter saying that the WWF is in danger of
“turning soft” because babyfaces like Kane just walk off instead of fight.  It is probably a safe bet that Rich is no
longer a fan of the product today.
This month’s “Tales From the Turnbuckle” breaks down the
three greatest SummerSlam matches of all-time. 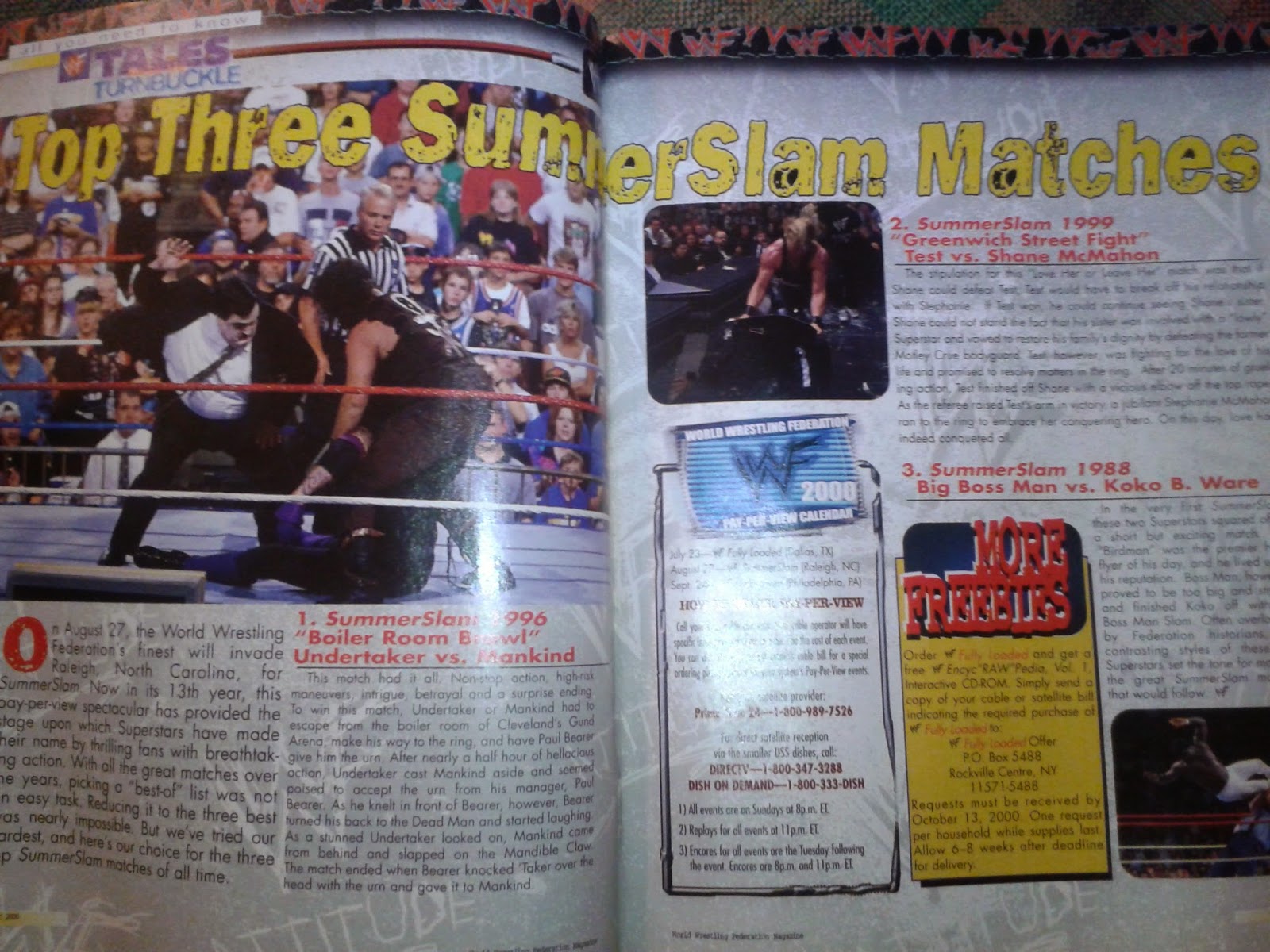 If you cannot see the list the selections are:  (1) Undertaker-Mankind from SummerSlam 1996,
(2) Test-Shane McMahon from SummerSlam 1999, and (3) Big Boss Man-Koko B. Ware
from SummerSlam 1988.  Yes, no Ultimate
Warrior-Rick Rude and no Bret Hart-Mr. Perfect.
The company’s unwillingness to reference wrestlers who were still in WCW
killed this list since that meant no Bret, no Hulk Hogan, no Randy Savage, and
no Scott Hall.  Evidently, Big
Bossman-Koko was a historic bout because “the contrasting styles of these two
Superstars set the tone for many of the great SummerSlam matches that would
follow.”  So next time you enjoy your
favorite SummerSlam match, give proper credit to the Bossman and Koko.  Oh, and Frankie too!
Then we get an illustration of the haircuts available in
the WWF Barber Shop: 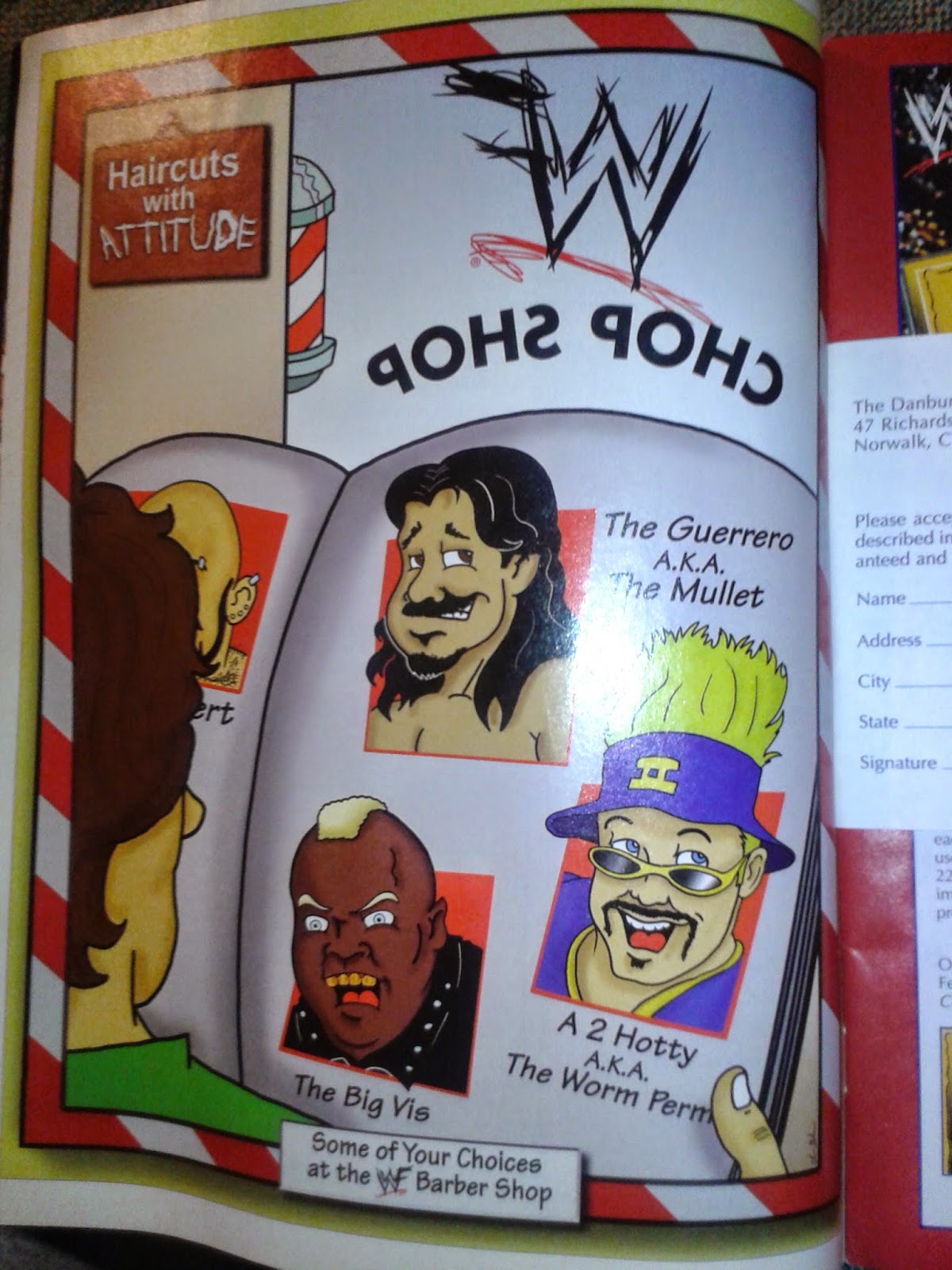 And this month’s magazine is pitching your ability to get
some WWF cards that are twenty-two carat gold.
Enjoy seeing Billy Gunn in all his glory, trying to avoid submitting to
the Rock in a headlock!  Each card will
cost you $9.95 (plus 95 cents of shipping and handling). 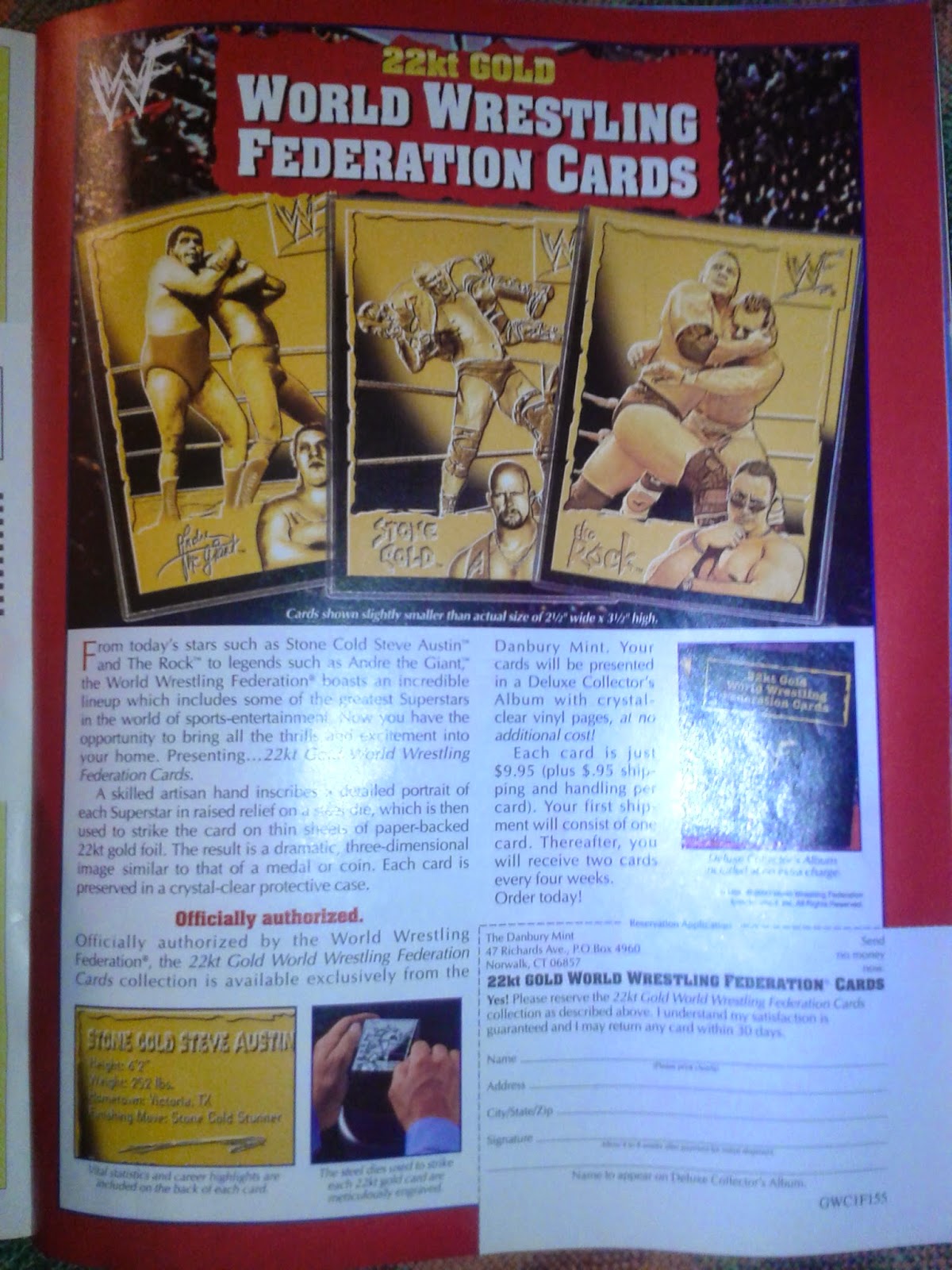 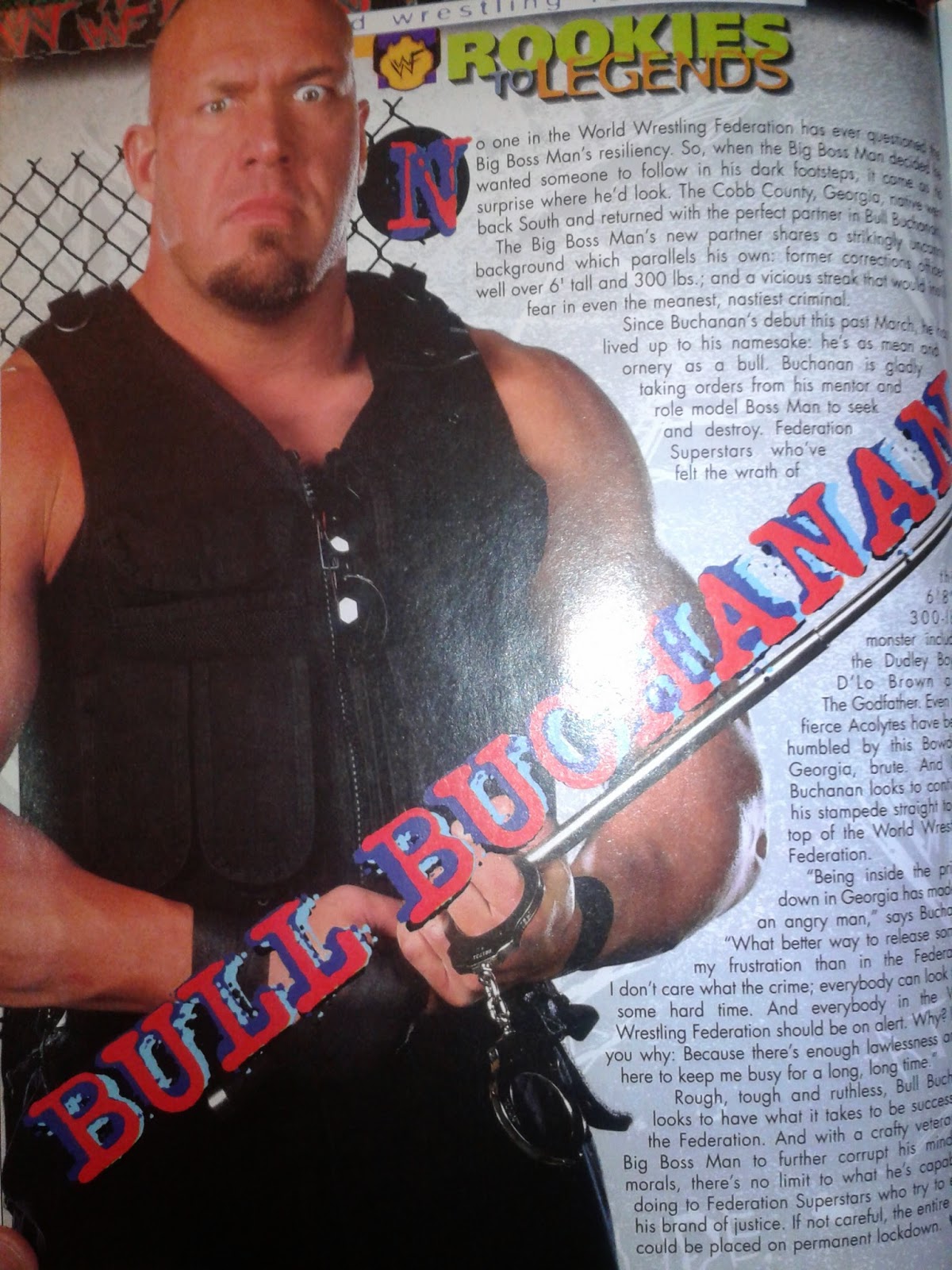 Buchanan was initially brought in as a member of the
Truth Commission in 1997 before returning a few years later as a partner of the
Big Bossman.  He would then be part of
the Right to Censor and had a brief partnership with John Cena before eventually
departing the company.  The only
highlight of his run was jobbing to Crash Holly in an upset at the 2000 King of
the Ring.  He was also briefly a tag team
champion with the “Goodfather,” but tag team title runs become a blur for me
after 1999.
We are then treated to a list of five things we will
never find for auction from “SteviE-bay” (in reference to Stevie Richards): 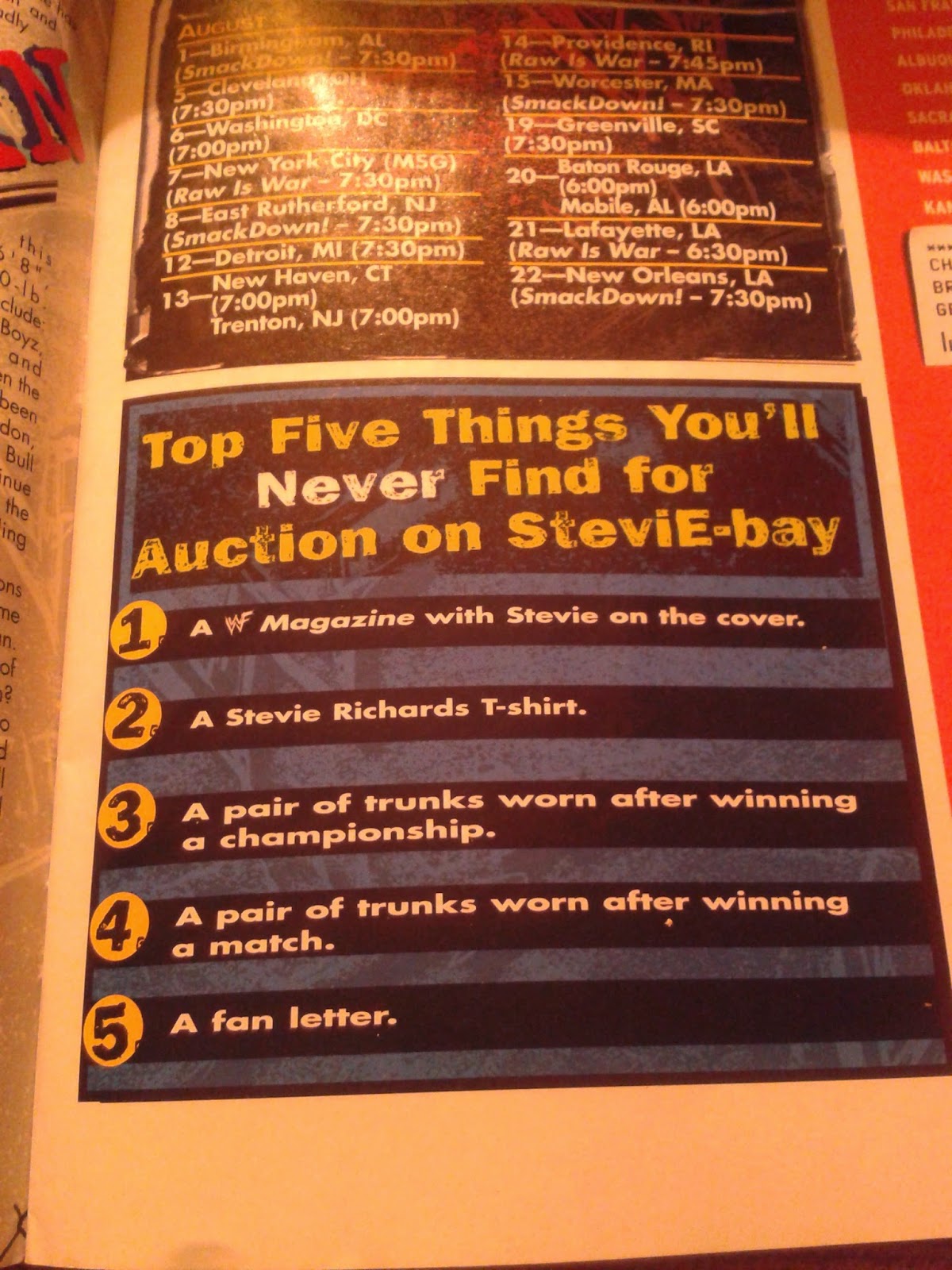 By this point, the magazine had a “Face2Face” feature
that fills the part of the magazine formerly occupied by Vic Venom’s “The Bite”
in the mid-1990s.  It is a debate column
where Aaron Williams and Laura take opposite stands on an issue.  The issue this month is Vince McMahon. 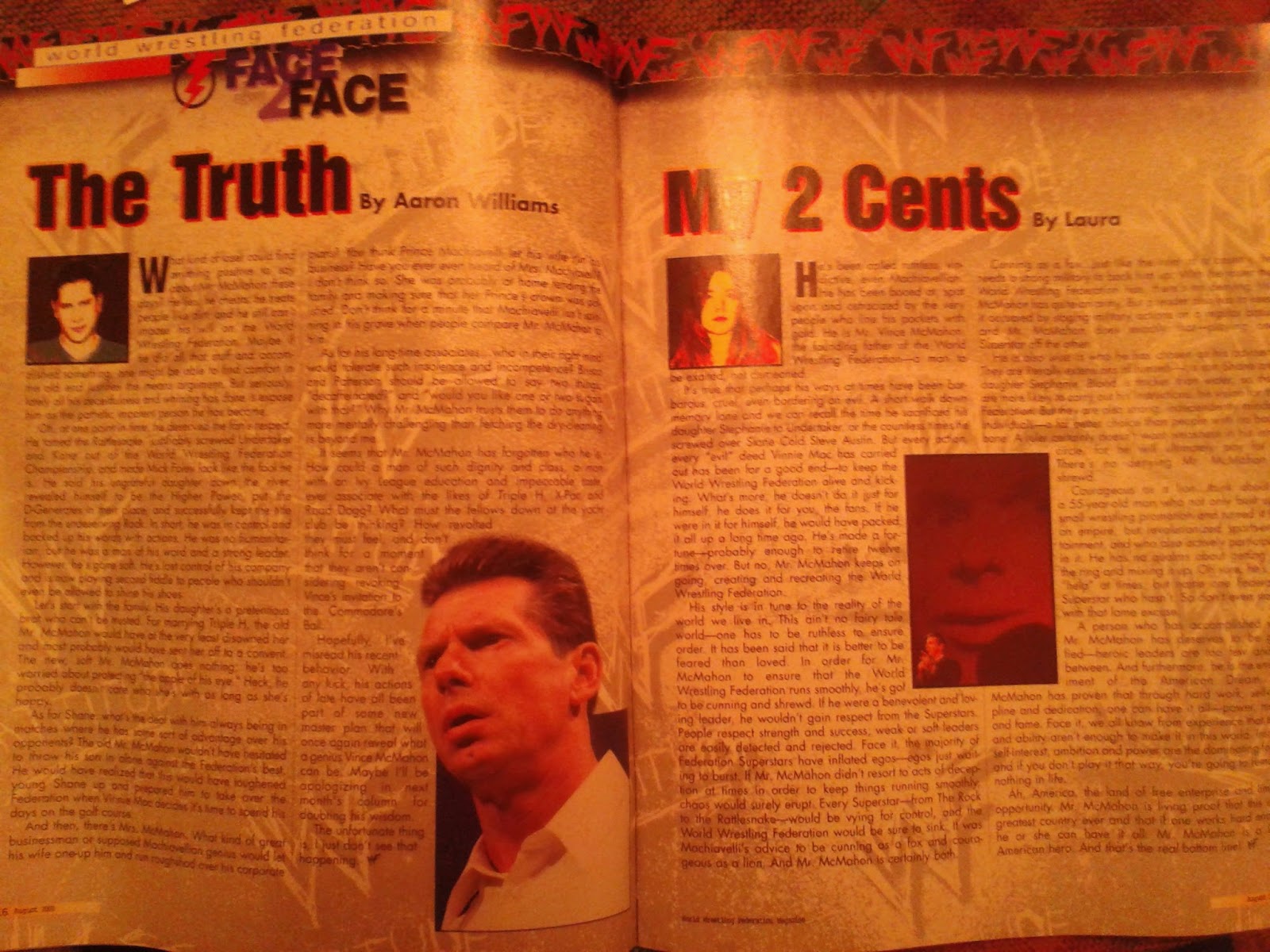 Aaron rips McMahon for cheating and becoming an “impotent
person.”  The comment about Vince having
an Ivy League education is something that I do not think is actually true, as
Linda earned her degree from East Carolina University and Vince was around her
at the time.  Laura defends Vince as “in
tune to the reality of the world we live in,” something that could not be said
of the booking of the company now.  She
also refers to Vince as an American hero, thereby explaining Stephanie’s 9/11
reference on Smackdown! in 2001.
It seems that every issue of WWF Magazine that I have reviewed so far, except for the June 1995
edition, had a piece about Chyna.  This
one is no different, as she gets attention in an article called “Power Behind
the Throne.” 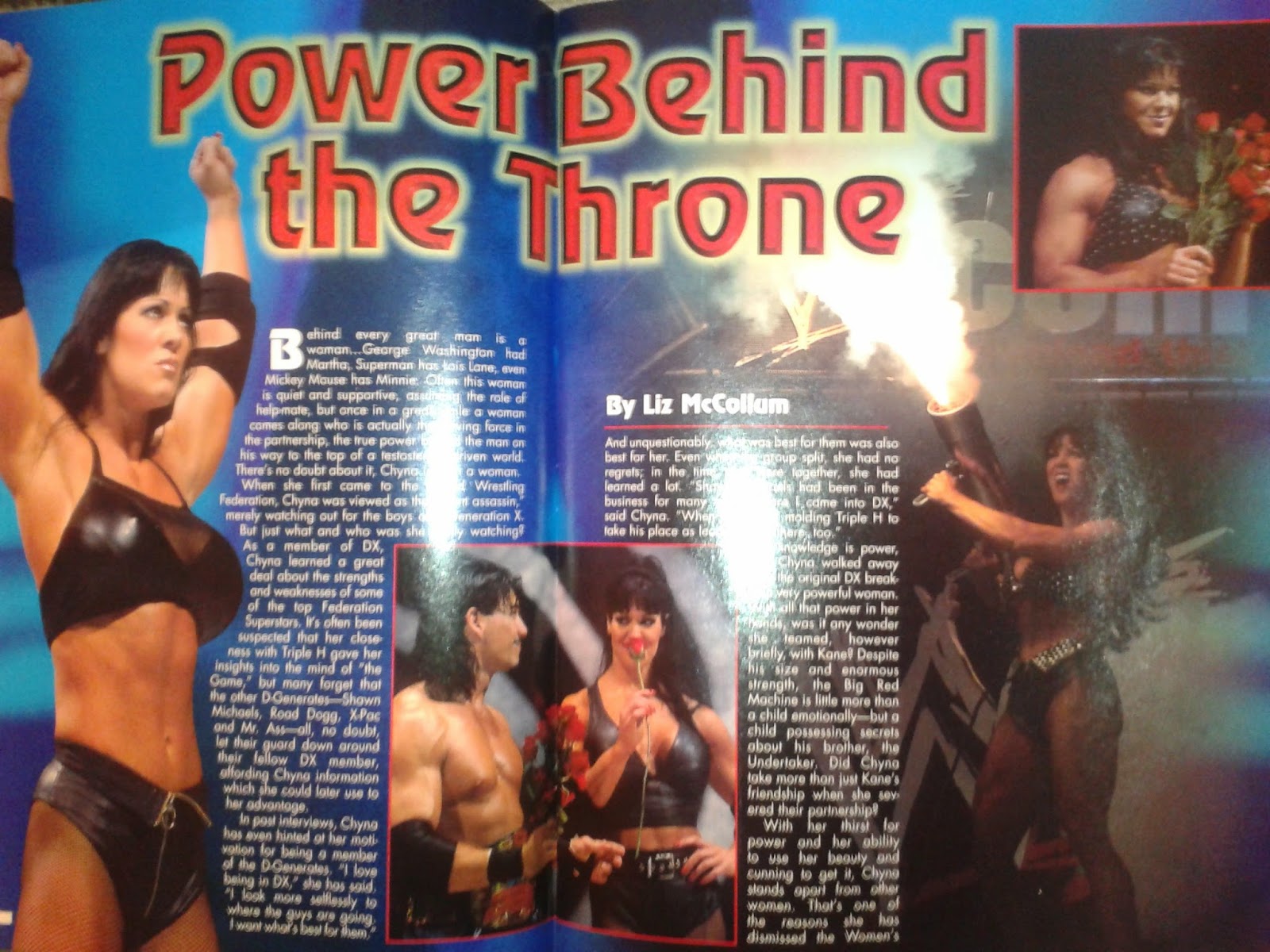 I guess this is tied in with the “Chyna’s Secret” heading
on the magazine, but the story does not really talk about a secret.  It recaps her partnerships with D-Generation
X, Kane, and Eddie Guerrero.  Evidently
she also had an alliance with the Kat sometime in the Attitude Era, but I do
not recall that at all.  In light of
Triple H’s podcast, one thing stands out:
“We [Triple H and Chyna] went our own ways, but that does not rule out
our paths crossing again.”  It definitely
seems like Triple H had put the kibosh on any plans to have their paths cross at
a future Hall of Fame ceremony.  Still,
though, why tell readers you are going to talk about “Chyna’s Secret” and then
just write an article that merely reiterates what we have heard about Chyna in
magazine pieces in the years up to this point:
she has worked with lots of great superstars and knows their strengths
and weaknesses.
Remember the “Got Milk?” campaign?  Steve Austin is here to remind us! 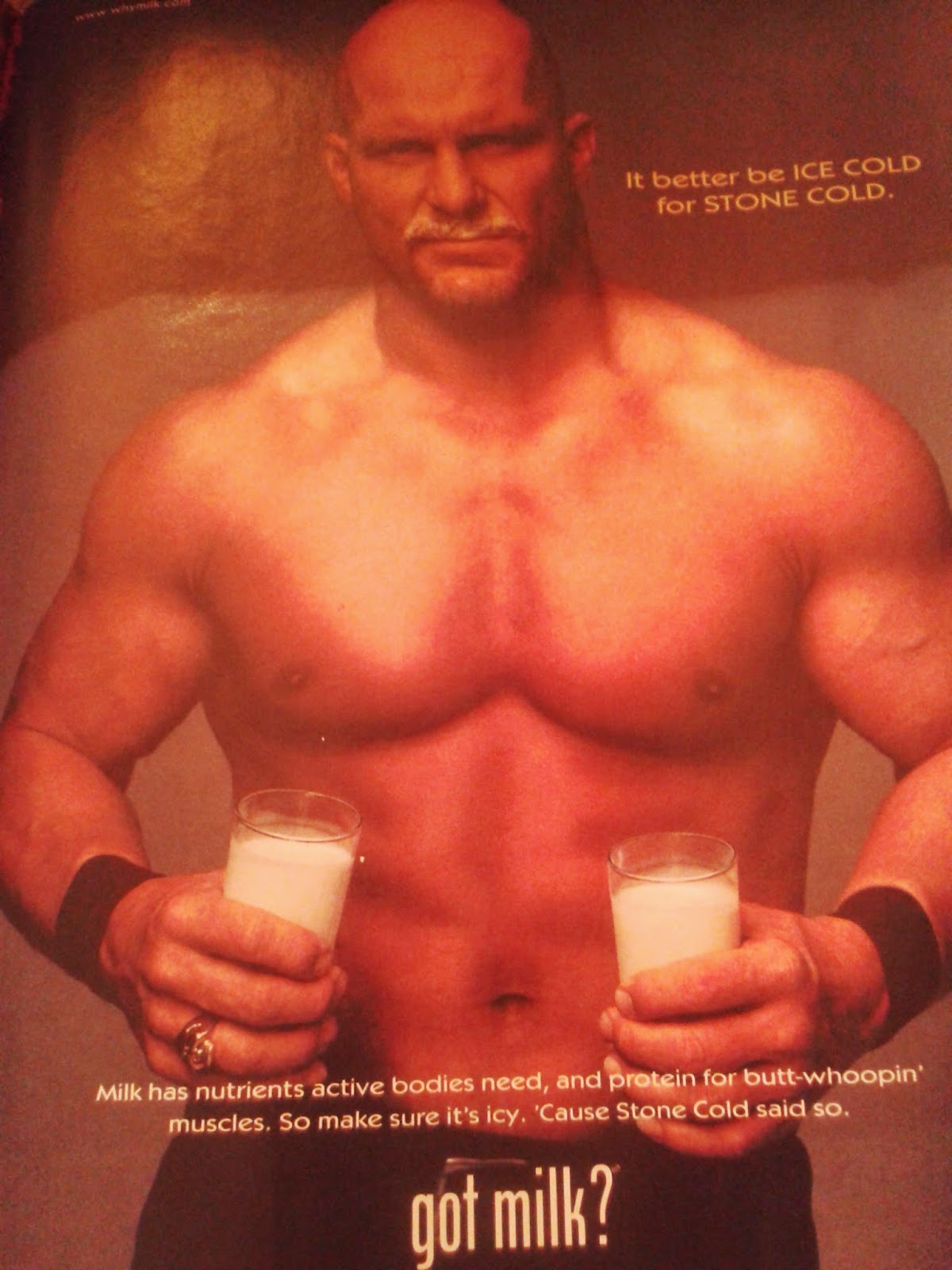 A career retrospective piece is then provided for the
Undertaker 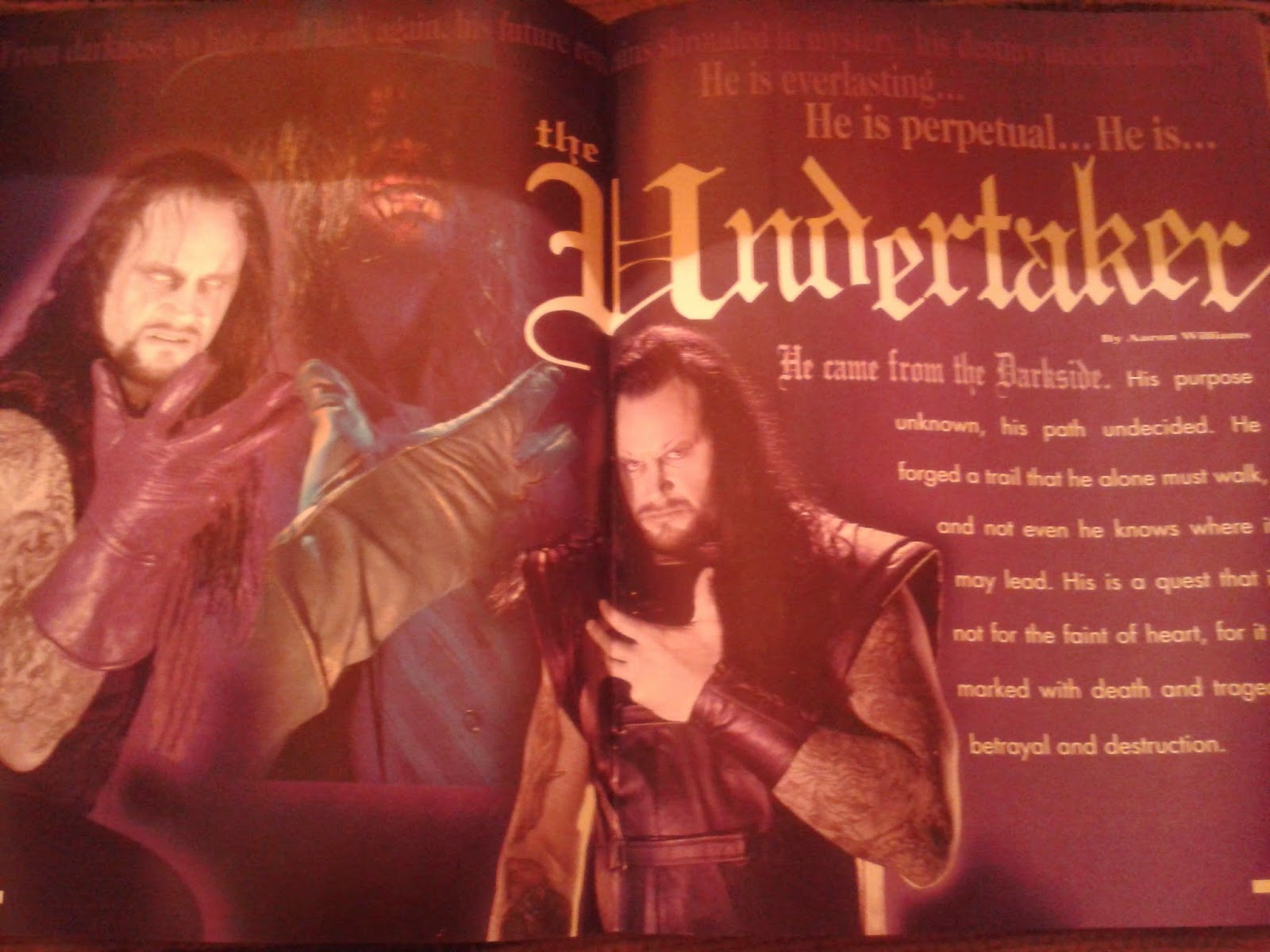 In recapping the Undertaker’s big foes, Jimmy Snuka is
even added to the list.  Poor Jimmy is
portrayed just like Kamala, the Giant Gonzalez, and Yokozuna:  he wanted to bury the Undertaker’s soul and
“erase his very being.”  And here I
thought that all Snuka wanted to do was win a WrestleMania match in Los
Angeles!  This is a pretty blah piece,
just telling educated fans everything they already know about the
Undertaker.  And this piece does not even
talk about the Undertaker’s new biker persona!
The late Crash Holly gets profiled in this issue as well,
as writer Mike Fazioli calls him “the king of Hardcore.” 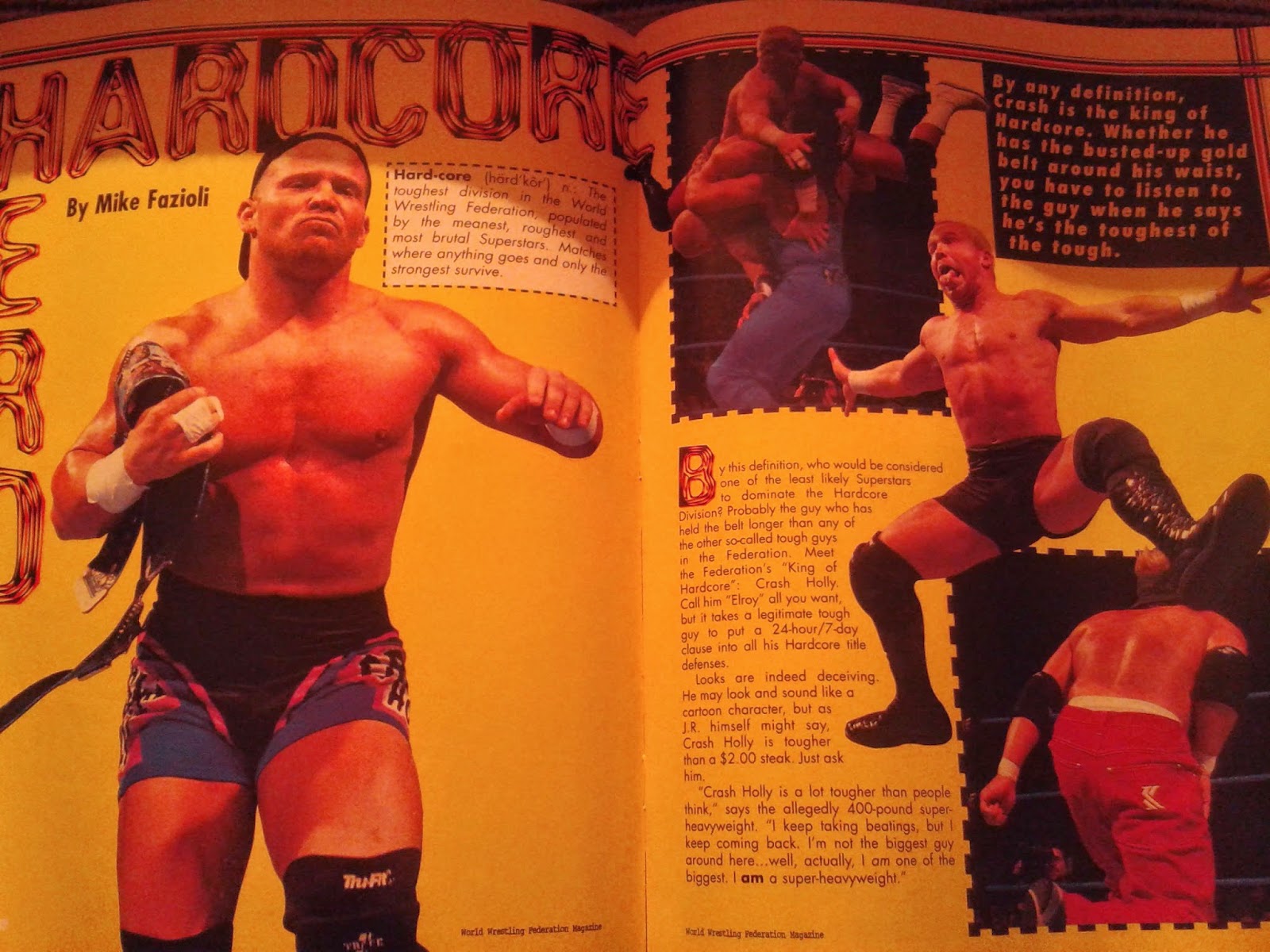 Crash is best known for defending the Hardcore title on a
24/7 basis, which led to him being called the “Houdini of Hardcore.”  If you ever try to look at the history of
that title it will make your head hurt as the 24/7 rule led to about three to
four title changes on every house show.
We are informed that Crash’s toughness comes from his cousin Hardcore
Holly, who used to beat him up when he would get angry.  After all, look what Bob did to Matt
Cappotelli on Tough Enough!
We then get our customary, somewhat uncomfortable profile
of Roots Genoa that we are bound to come across in a WWF Magazine of this time period 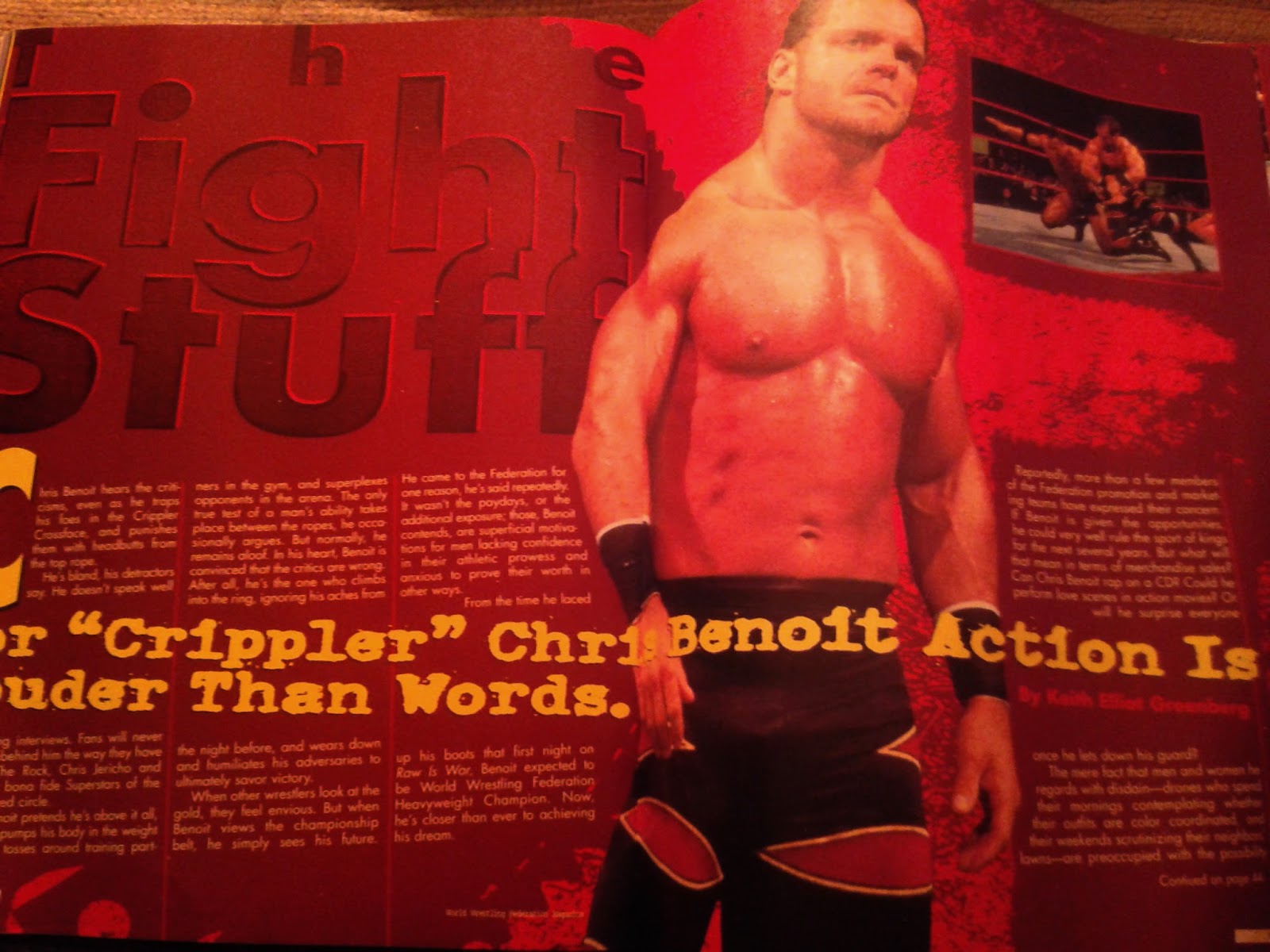 It highlights how Benoit has his sights set on becoming
WWF champion even though there are concerns by the WWF promotion and marketing
teams that he might do something big since he is not as charismatic as other
superstars.  The article even draws a parallel
about how competing in the WWF is more difficult than the past since Benoit
cannot be like a wrestler “in the old days who could coast defeating perennial
losers in easy televised matches” between big bouts.  Our big eerie line from this well-written
piece by Keith Elliot Greenberg:  “Most
likely, their [the WWF’s] efforts to convert him into a cut-out media darling
will be unsuccessful…”
We get a listing of the toughest ten superstars in the
WWF.  The list is purely kayfabed as
there is no mention of Steve Blackman on this list. 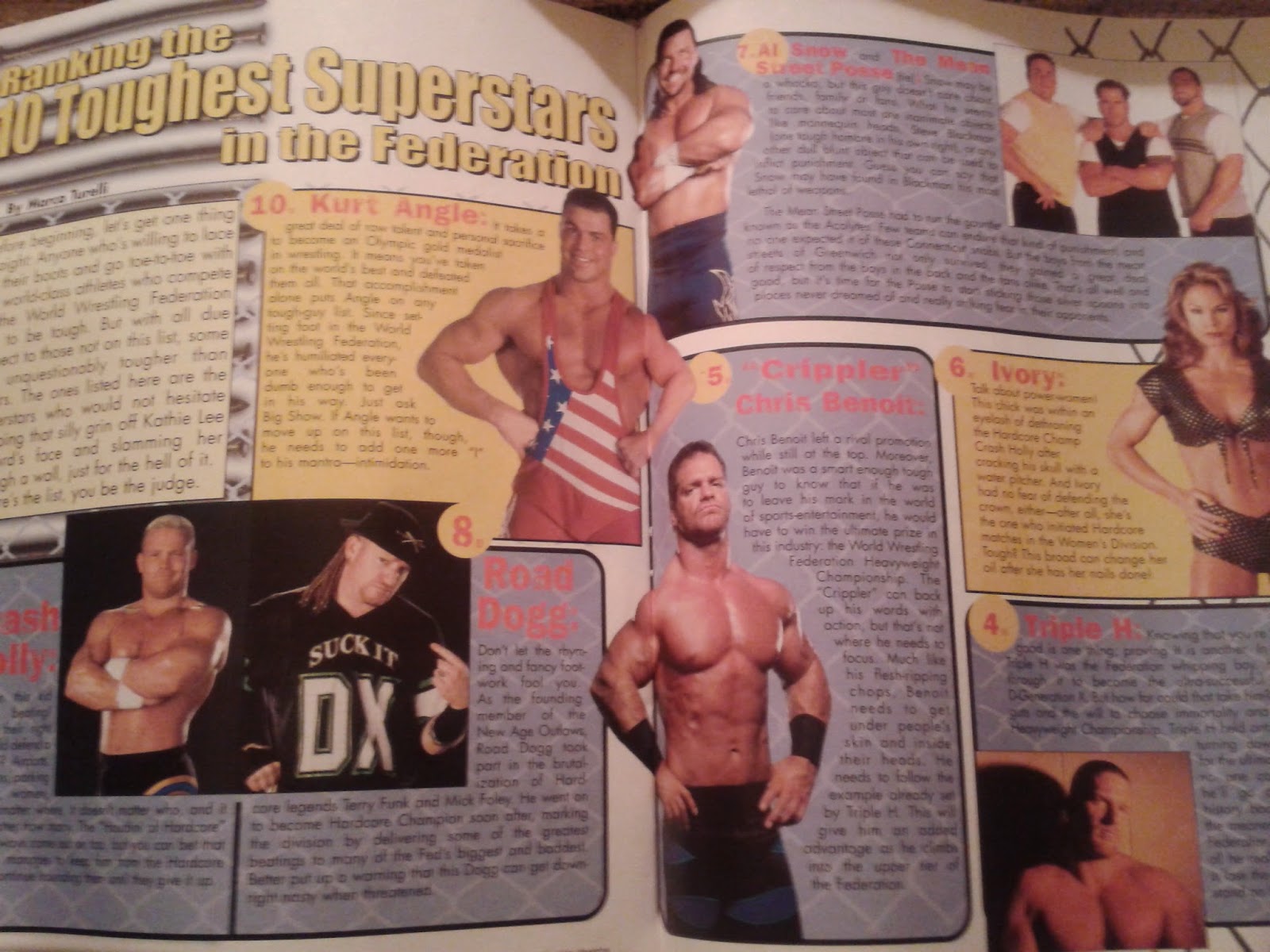 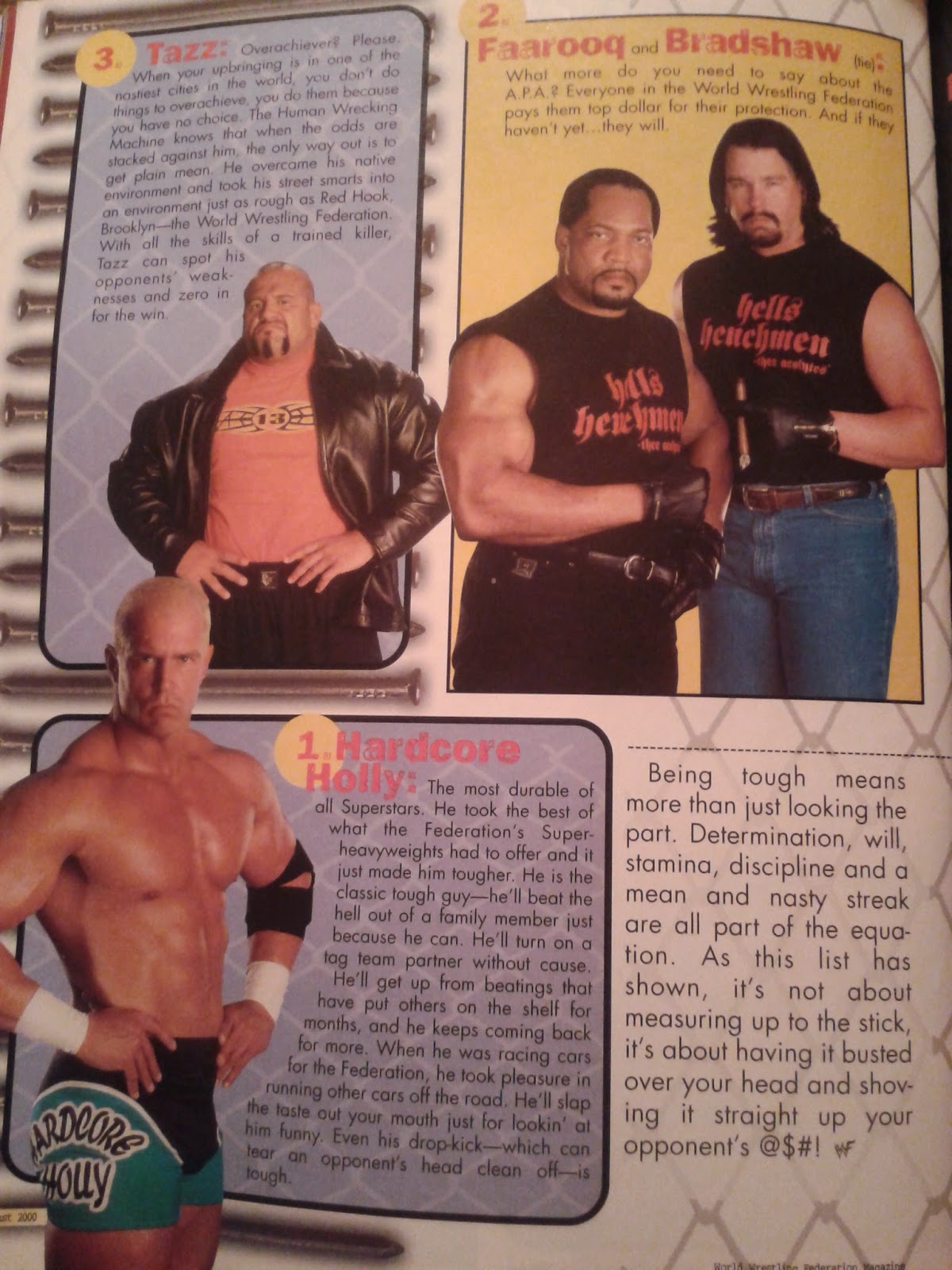 Kurt Angle is criminally underrated, but he is given his
ranking because he is not intimidating enough.
Tazz has to be in the top three due to his gimmick.
This month’s interview piece is with Terri, who was going
by the nick name of “She-Devil” around this time. 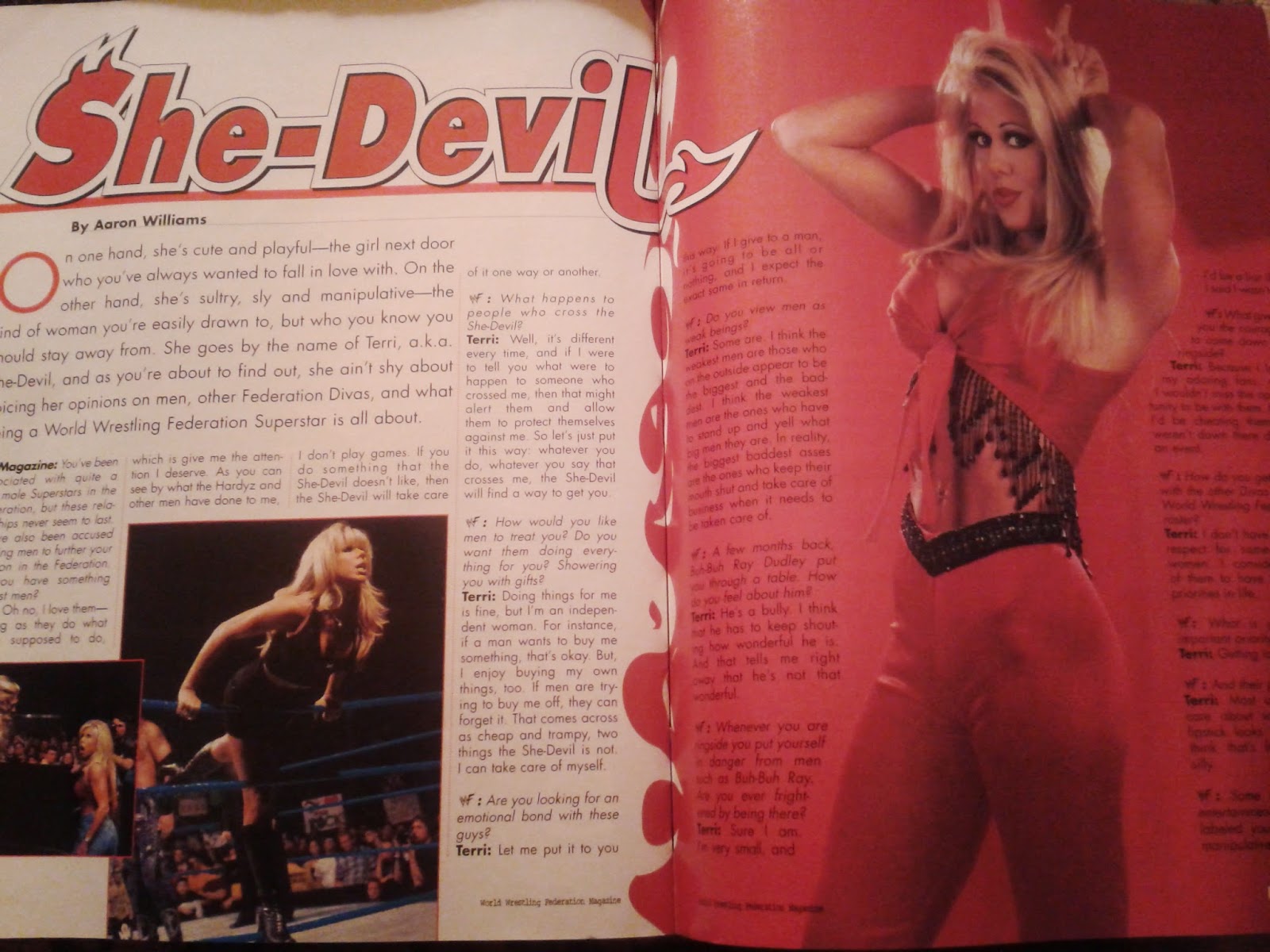 She makes clear that she likes to be independent,
although it is okay for men to buy her things.
She also says that she has no interest in pursuing a singles title and
that she considers Bubba Ray a “bully” for putting her through a table.  I am concerned that she says Jerry Lawler is
her “kind of guy,” though.  Dustin should
have submitted this as evidence in the divorce proceedings for custody!
And when I talked about the pay-per-view recaps getting
smaller and smaller, I meant it.  Look
what we have been reduced to in the 2000s: 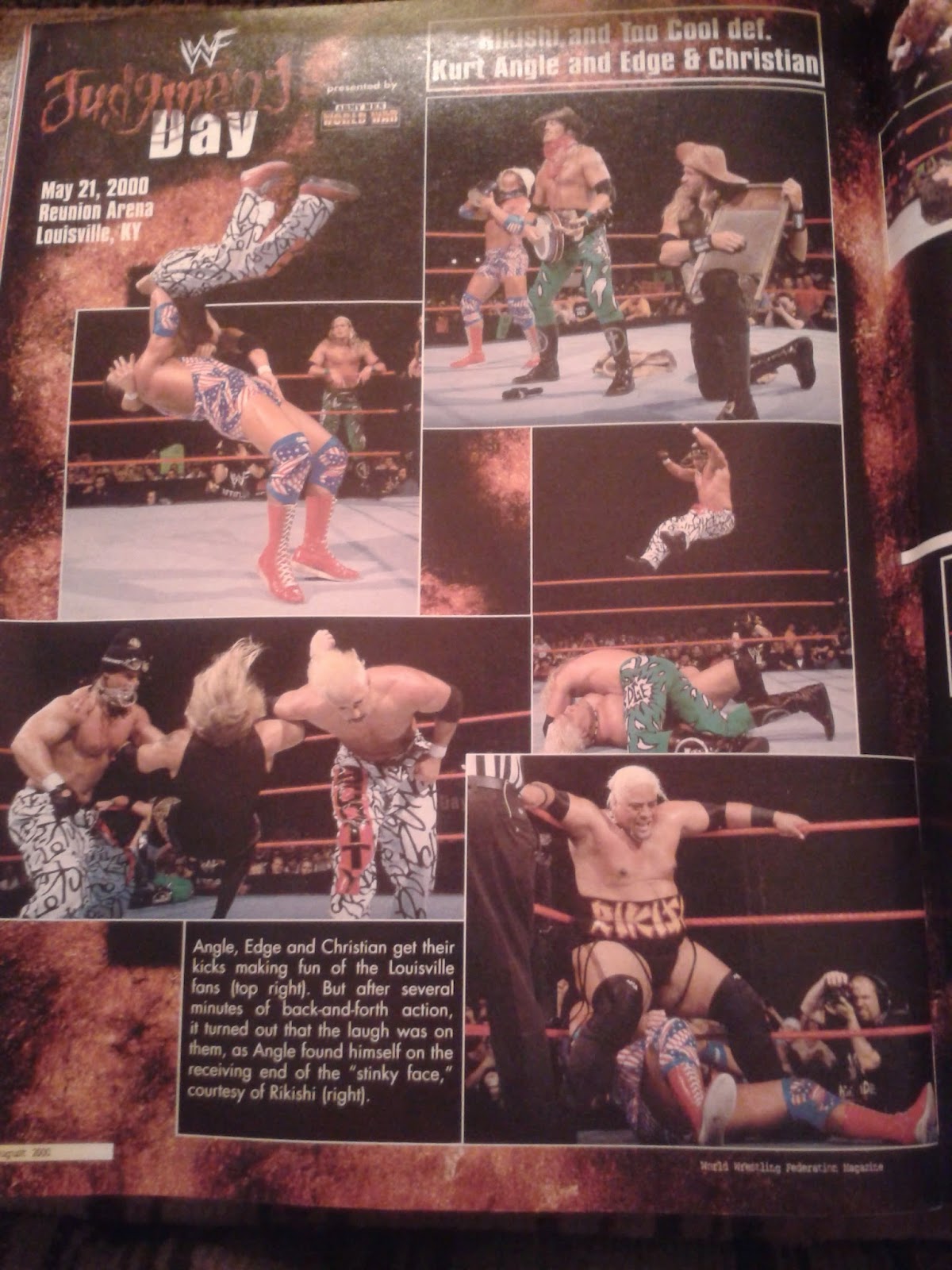 How can you adequately recap a match in less than three
sentences?  This is really egregious for
the Iron Man Match between Triple H and the Rock, which gets less than a
paragraph.
Remember to drink your milk! 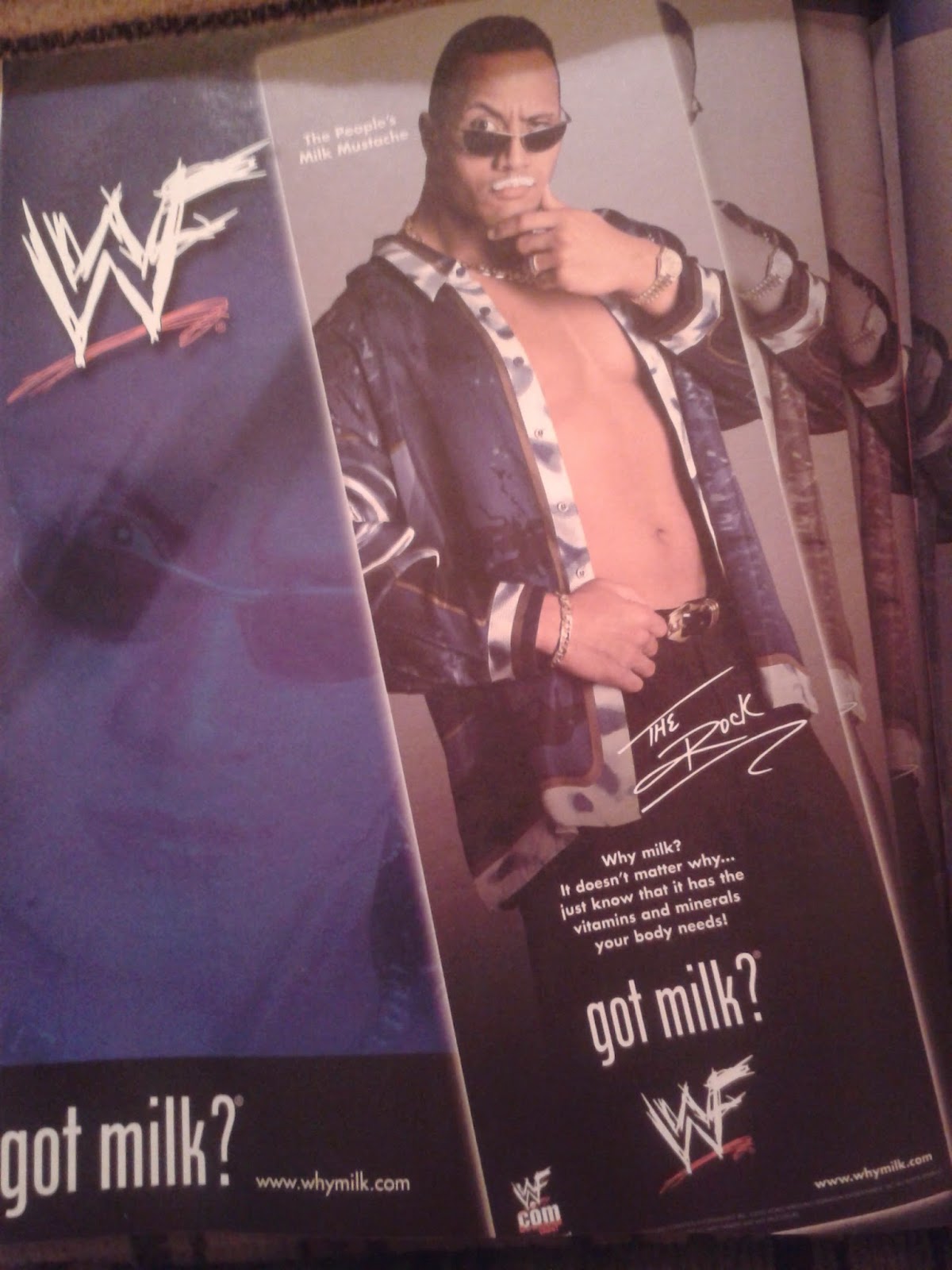 And we close the magazine with a Stevie Richards column
entitled “Gettin’ Heat.” 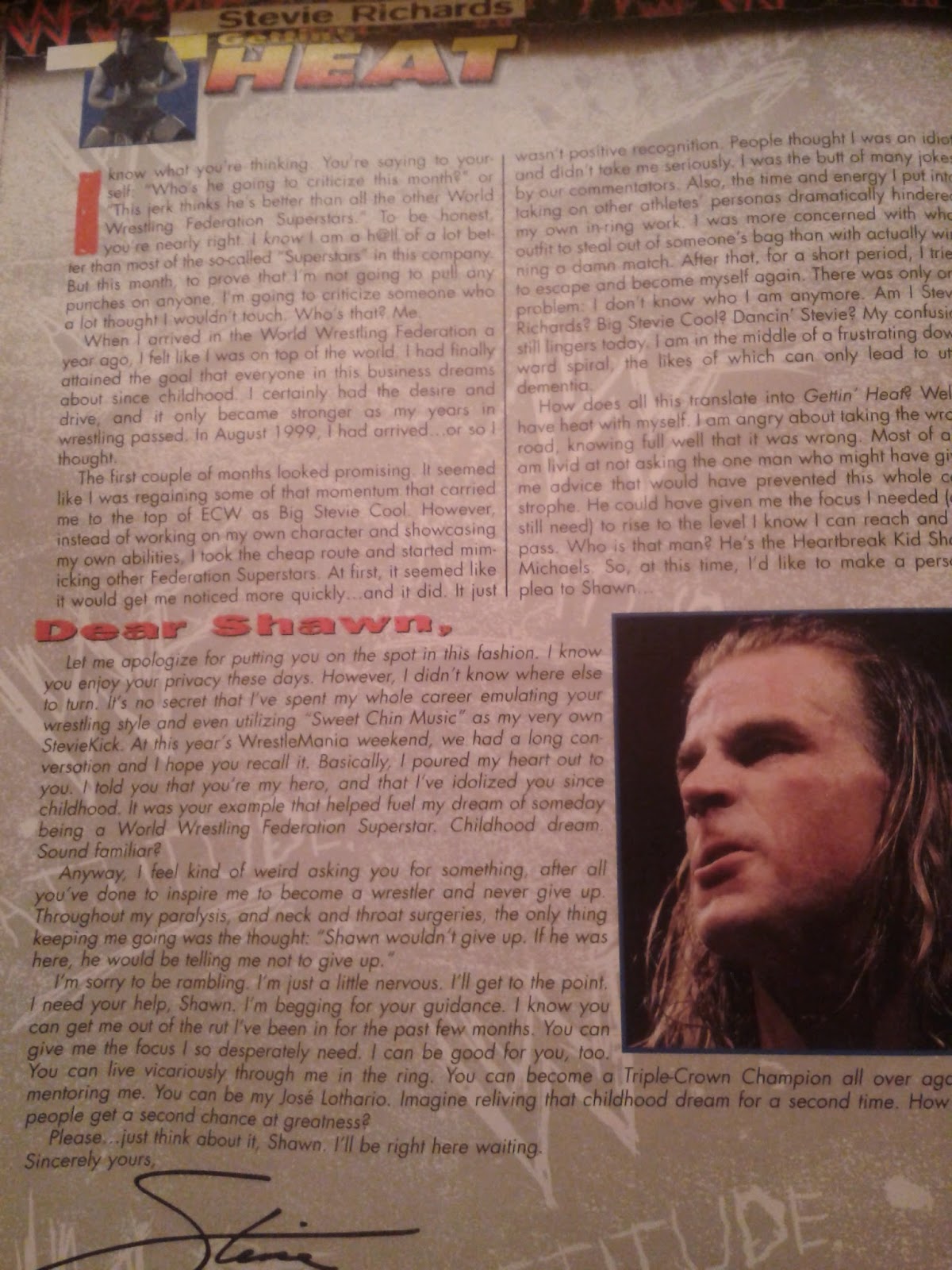 In this column, Richards traditionally made cracks at a
WWF superstar.  This month, though, he
attacks himself for stealing other wrestlers personas when he came into the
company.  He says that he wishes he
sought out Shawn Michaels for advice and he writes him a letter asking for
guidance.  I will bet that Michaels never
answered it.
Of all the magazines that have been covered by this
column this was the worst.  The only
redeeming column was Greenberg’s on Benoit with the rest constituting very
boring, dry reads.  The magazine lost a
lot of its creativity without Russo or Kelly at the helm.  Next week we will move forward two years and
recap the April 2002 issue of WWF
Magazine, which features the New World Order on the cover.
Rants →