A replay of Roddy Piper’s squash on Wrestling Challenge airs.

Gene Okerlund’s Update segment replays WWF President Jack Tunney’s announcement that the main event of WrestleMania VI will be title-for-title.  Also replayed are the promos from Hulk Hogan and the Ultimate Warrior on Superstars.

Vince McMahon and Jesse Ventura are doing commentary and they are concluding the tapings in Birmingham, Alabama.

Vince McMahon and Jesse Ventura are in the booth and they are taped from the Von Braun Civic Center in Huntsville, Alabama.  This taping took place on December 13, 1989. 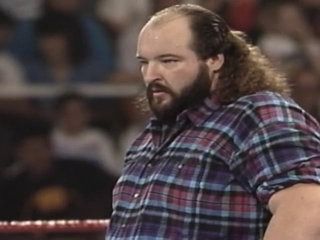 Tenta as Yukon lumberjack “Earthquake Evans” in a 1989 tryout match, with Slick as his manager!

I’ve long felt that John “Earthquake” Tenta is a tragically underrated “Big Man” worker, but, much like Haku, he’s had a bit of a renaissance as former Workrate Snobs like me have learned to appreciate what a hard-working big guy can bring to the table. I was gonna make a more varied list for a column, but I had enough for a full one of JUST Tenta, so here’s a random selection of fun or weird Earthquake matches! Watch him take on such luminaries as Paul Roma (back when he was trying out in a Lumberjack gimmick!), The Big Boss Man (with one hell of a power feat), Tugboat & Bastian Booger!

The fun stuff about Prime Time Wrestling without all the matches dragging in down.