This is another of the Wrestlemania Weekend shows and in this case, it is another WrestleCon show. I didn’t actually take this one in as I went to Axxess instead and I’m not sure what this is going include. That can make for some very fun shows as well and hopefully that is the case again. Let’s get to it. 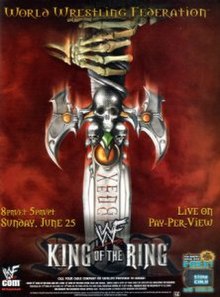 WWF KING OF THE RING (2000)- SECOND ROUND:
* Continuing the previous review, the second round of the 2000 King of the Ring features some of the more “Okay, come on- is this really a random draw?” matches, as a few guys fight unrelated opposition, but we have Chyna/Eddie, Rikishi/Scotty, and Crash/Hardcore. Because Early 2000 WWF: BULL BUCHANAN! Whether you want him or not!

The much larger Bull uses his size to start, shoving Saturn around, but eats a boot in the corner and a dropkick off the middle. He throws punches but eats a clothesline, but a third straight “whip to corner” reversal sees Saturn back on the advantage, tripping Bull into the ropes and hitting a T-bone suplex for two. But Bull comes off the ropes with a boot and hits his Ax Kick finisher for the quick win (1:51)! Jesus christ that was fast. As a match, this was nothing- Bull was so green they just did three “whip to the corner, but the guy who hits it reverses the charging move” spots to switch momentum, then ANOTHER whip-reversal to set up the finish. 2 minutes for a clean win marks Saturn as the “Jobber” of the Radicalz, which is funny as he was one a lot of fans (including me) assumed was gonna be the biggest star.

Rating: 1/2* (very quick and mobile match, but super-short and a glorified squash)

KING OF THE RING (Qualifying Matches) 2000:
* So I finally remembered to do another one of these, though we’re past the point where I can recall most of the angles. The name of the game this tournament is the same as last one- Make A New Star. Hopefully this “Kurt Angle” guy will prove more successful than Billy Gunn. This will be a MONSTER set, so I’ll split it up for today and tomorrow.

This tournament is unusual due to the MASSIVE roster of guys- the jam-packed company and no Russo at the time (therefore his attention span couldn’t wreck it) made for a 32-man tournament! We’ve got a huge assortment, though, as all four Radicalz (then newly-hired by the company), Chyna, Jericho & Rikishi provide serious competition, while the company’s vast tag ranks fill out slots left & right for “easy wins” or upsets- Too Cool, APA, T&A, the Hollies, Dudleys & Edge/Christian. This is a verrrrrrrrry interesting time for the company, as they put the final nail in WCW by hiring away four of their top workers, while Jericho & Rikishi had gotten over and Angle was now a completely miraculous rookie find. And what was a company based around having shitty 2-minute brawling matches now had a ton of great wrestlers all over the place, which was kind of shifting the basic style to longer matches with high spots.

Of course, having looked at all these matches… they’re still mostly super-short (as KOTR matches have been since 1994, to be fair), and OH GOD a ton of guys are still stuck in the “Punch & Kick” mode. Bad agenting was all around at this time, with only a handful of guys avoiding it. But it’d be a long, hard road to hit the point of improvement, and a lot of dudes who couldn’t make that transition saw their careers die. You’ll see a very high level of “the guy who loses the match does most of the offense”, probably in a way to look a bit strong or make him feel better about losing- this goes back a ways (you see mid ’90s joshi do this a bunch, too).

I’ll do the first round in one post, then see what I can find for the second round for next week.

RIKISHI vs. SHANE McMAHON:
(May 29th, RAW)
* Okay, I forget the story behind this. Shane is entered in the KOTR, but has to fight Rikishi, who is in the midst of his biggest year ever before everything went horribly wrong. Shane, in a WWF shirt & regular jogging pants, boasts about “beating the Big Show” and how Undertaker couldn’t beat him, marking him as a smart-mouthed wimpy heel.

We are about a month away from Wrestlemania and that means it is time for the big response from Undertaker. Batista attacked him at No Way Out and since this is wrestling, the two of them are taking turns in talking to each other. Other than that….well other than that, Smackdown needs another important story for the show. Let’s get to it.

No Way Out has come and gone, with the big story being Batista attacking Undertaker to end the show. It wasn’t quite a heel turn but rather Batista being more aggressive and ready to fight. That should make things all the more interesting on the way to Wrestlemania and we could probably use some more stuff to build it up. Let’s get to it.

It’s that show where WWE pretends that it matters while showing us a commercial for Wrestlemania. The main event is a tag match between the Wrestlemania main events, which should be a quality though unimportant match. Other than that, we are getting a Divas Talent Show, which should be as exciting as it sounds. Let’s get to it.

It’s the go home show for No Way Out, which really needs to wrap up already so we can move on to the stuff that matters. This show has been working pretty well as of late and a lot of that is due to focusing a bit more on wrestling than anything else. Now just make me care about the pay per view. Let’s get to it.

We’re on the way to Armageddon and the big story is that Raw World Champion John Cena will be joining forces with Smackdown World Champion Batista to face King Booker vs. Finlay. That could make for a big house show match, though they are going to need something a little bigger to make the card work. Would an Inferno match and a Last Ride match be enough? Let’s get to it.

It’s time for another guest stars show as John Cena and Big Show are here to scout for the upcoming Champion Of Champion match. That could make for a bit of a problem though as King Booker is defending the title against Batista following a #1 contenders match on last week’s show. Let’s get to it.

We’re on the way to getting ready for No Mercy and the big story coming out of last week was Finlay attacking Batista to cost him the World Title. The post match beatdown would suggest a hoss fight between Finlay and Batista, which could make for one heck of a brawl. I’m not sure what else to expect from this one so let’s get to it.

It’s the go home show for Summerslam and that means it’s time to take one of the biggest matches from that show and move it here. This time around it’s Great Khali vs. Undertaker in a Last Man Standing match, as Khali might not be trustworthy to put in the ring on live television for more than about two minutes flat. Let’s get to it.

After Monday’s less than amazing debut for Raw, it’s time to see if Smackdown can save the opening week of the Brand Split. This show has its share of stars including The Rock, Chris Jericho, Hulk Hogan and Kurt Angle. Those names alone should be enough to help carry this past Raw but this company has managed to disappoint me with less. Let’s get to it.