It’s time to get on the Road To Wrestlemania and that means we should be in for a big night. There are two Royal Rumbles, but the real main event is probably Roman Reigns defending the World Title against Kevin Owens. The interesting piece there is not in the result, but in what Sami Zayn is going to do. That should make for a heck of a show so let’s get to it.

We’ve got another Stinker Review for you this week, where I look at a show with a bad reputation and then decide whether that reputation is deserved. This week we’ve got WWE Royal Rumble 2006, a show renowned for being pretty awful from a general match quality perspective with a Rumble match itself that way under delivers.

I remember disliking it a lot back in the day and I never really wanted to go back to it, but maybe time has been kinder to it?

You can view the card by clicking below;

Tony Khan “In Pool Of Potential Buyers” Of WWE
With rumors of a WWE sale swirling, it appears AEW President Tony Khan is one of the many potential buyers of his competition!

Jim Ross Sends Message To WWE Stars – “Do Your Job… Don’t Be A Baby”
WWE Hall of Famer Jim Ross has strong words for WWE Superstars in the wake of Vince McMahon’s return to the company.

I watched a terrible WWF show last week, so I thought I’d redress the balance by watching a GOOD WWF show this week, in the form of Royal Rumble 1992. For those not familiar with the backstory, Undertaker and Hulk Hogan had a dodgy finish in a Title match that even saw WWF President Jack Tunney take a bump as part of the circus. Thus, the belt has been held up and the winner of the Royal Rumble will win be declared Champion.

Also on the undercard we’ve got Roddy Piper going for the Intercontinental Title against The Mountie, along with The Natural Disasters trying to win the Tag Team Titles from The Road Warriors. Ric Flair is very much the MVP of this show though. I’ve said it before that if the 1953 FA Cup Final is the “Matthews Final” then the 1992 Royal Rumble is the “Flair Rumble”.

If you’d like to view the card you can do so by clicking below;

I believe this is my fifth time reviewing this show but I’m always curious to see how much different it feels having recently watched the TV leading up to it. The show has been set for a long time now and that means we need to get on with the pay per view already. Of course there is the Royal Rumble, but the Raw World Title match between Jeff Hardy and Randy Orton is the real draw here. This show is summed up in three words: Hardy Could Win. It worked in 2008 and it’s working again here. Let’s get to it.

WWE Hall of Famer Eric Bischoff has explained why he did not care for a former Royal Rumble winner back in their days competing in the ring.

Matt Jackson has claimed The Young Bucks are the “most influential” team ever as he and brother Nick celebrate their 18th anniversary in wrestling.

Rumour Killer On WWE Clash At The Castle Main Event

A new report has provided some details about the rumoured changes to the WWE Clash At The Castle main event on the 3rd of September.

We are officially kicking off the Road to WrestleMania XXXVIII and that means things should be starting big here. First up we have the Royal Rumbles themselves, plus what should be a pair of awesome World Title matches as Brock Lesnar defends against Bobby Lashley and Seth Rollins challenges Roman Reigns. Let’s get to it.

The wife and I took in the Rumble, which I had been wanting to do in person for the better part of ever. To say it was a bit of a letdown would be an understatement as there wasn’t much done right.  Let’s get to it.

Good day one and all!

This was the first wrestling pay per view I saw in full, as prior to that I’d only been able to catch the odd thing on terrestrial TV here in the UK (which wasn’t much after the mid-90’s). My friend Jim brought a tape of this round to my house and I was pretty much hooked from that point onwards, reading the magazines and getting whatever little scrap of wrestling action I could on video until both WCW and the WWF got slots on Channels 5 and 4 respectively, meaning I could finally watch wrestling on the telly.

The WWF seemingly had three targets they wished to achieve here. Get Stone Cold ready for the WrestleMania Main Event, introduce Mike Tyson as that year’s big WrestleMania celebrity guest, and also heat up The Rock as the hottest Heel in the mid-card. Let’s see how they got on with that.

This one has had an interesting build with the Royal Rumble itself only getting a quick build a the end. That being said, this is the kind of show that doesn’t really need to have anything set up for the main event to work, so it actually works for a change. We also have Batista defending the Smackdown Title against Mr. Kennedy and John Cena defending the Raw World Title against Umaga in a Last Man Standing match. Let’s get to it.

It’s officially the Road To Wrestlemania and that should only be a good thing. The other major positive this year is how wide open both Rumbles could be, which means we could be in for a lot of drama. Other than that though, it is going to be a bit sad to watch the Rumble with no crowd. Let’s get to it.

Next week I’m doing another Stinker Review, so I decided that I’d do a show I actually like this week in the form of WWF Royal Rumble 2002.

This show actually happened during a period where I was getting progressively less into wrestling due to WCW and ECW falling by the wayside and the fact I hadn’t discovered Japanese Wrestling yet. However, the emergence of Brock Lesnar and the Smackdown Six ended up re-energising my fandom later in the year and then I discovered ROH and NOAH in early 2003, which pretty much ensured that I’d have some form of wrestling fandom going forward.

Despite being a bit down on the WWF’s product following the lame Invasion angle of 2001, I was still tuning in to Sunday Night Heat on Channel 4 due to having no access to satellite on my house. When that contract wasn’t renewed I was left without any access to wrestling on TV for the first time in 3 years, which was a bit of a pisser in all honesty. However, a friend taped this show off SKY Box Office and leant me the tape, so I watched it more out of curiosity for the guys who were scheduled to comeback in the Rumble match itself and I ended up loving the show.

To this day, this is still one of my favourite Rumble events from top to bottom, so let’s take a dip into 2002 and watch some chuffing wrestling!

This is going to be an interesting one as the Rumble itself has received very little build. It has gotten about as little attention as I can remember in recent years, but things are in a weird place at the moment anyway. Other than that, we have Mark Henry challenging Kurt Angle for the Smackdown World Title and John Cena trying to get the Raw World Title back from Edge. Let’s get to it.

The new era begins for Monday Night Raw as the show will be at the Performance Center for the time being. That is going to be the case for almost anything, including Wrestlemania as officially announced this evening. I’m not sure what to expect, but Steve Austin, Edge and Undertaker are going to be in the building (without many more people). Let’s get to it.

It’s time to get started on the Road to Wrestlemania and while you could say the Rumbles are predictable, you could also say that they’re wide open. This is a very strange situation and I’m rather pleased with that. I’m not sure who is going to win either but they’re going to mean a lot. Let’s get to it. 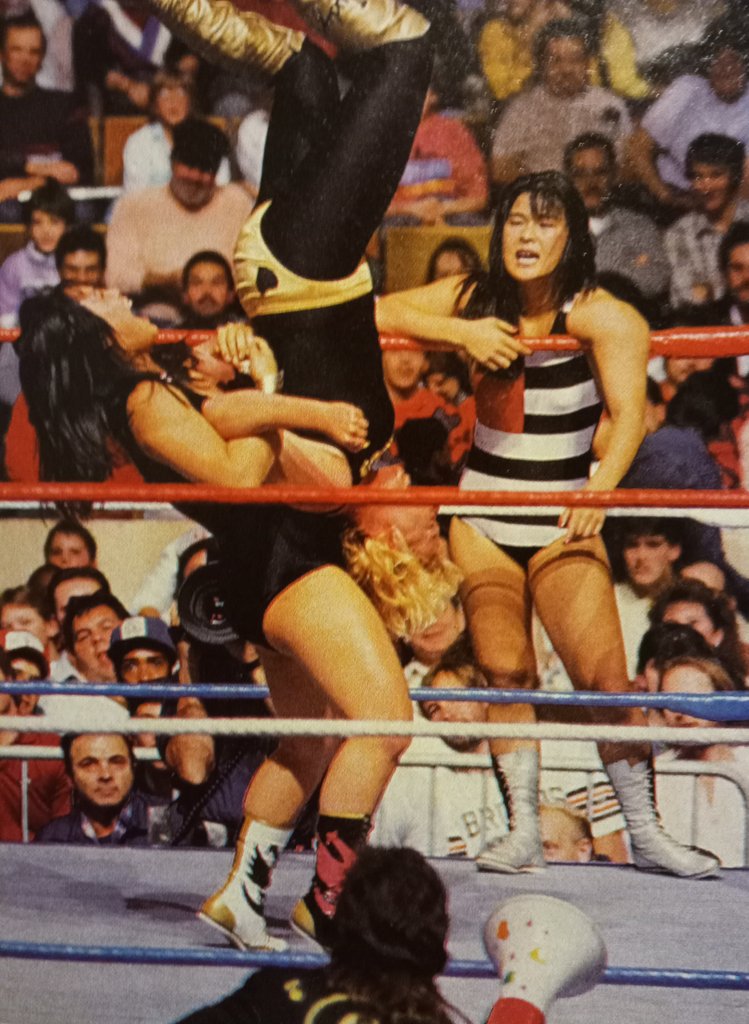 JOSHI SPOTLIGHT- JOSHI IN THE WWF (1980s Edition):
This is a real bit of weirdness, and one that has largely been ignored by WWF history- the late 1980s run of the Jumping Bomb Angels (and other Japanese women’s wrestlers) in the WWF. The timing was odd, and I’ve never read a behind-the-scenes piece of this era, so it’s a tricky thing to put together.

Many wrestling fans, especially us “Workrate Snobs”, are aware of the Jumping Bomb Angels getting a terrific run in the WWF from 1987 to 1988, though you would actually see the occasional bit of guest-starring from AJW-trained women before that. There are a couple of Crush Gals matches on WWF TV from early 1986, in fact!

We’re finally to one of the more important shows ever and the main event is a two horse race. This is clearly the year of John Cena or Batista and either one is a great option to win. They’re owning their shows right now and both of them seem to be locks to walk out of Wrestlemania with the World Titles. Predictable does not mean bad though and that seems to be the case here. Let’s get to it.

It’s the first of the Big Four pay per views and that means it’s time to really get going with the busiest season of the year. In this case that means a pair of Royal Rumble matches, which may or may not have the highest levels of drama. I’m not sure who we’ll be seeing tonight, but it could be interesting. Let’s get to it.

The Royal Rumble event has always been about more than just the Rumble itself, with some real gems to be found on quite a few of the undercards. Because there have been so many Rumble events, I decided to split the Non-Rumble matches into three different segments, 1988-1998, 1999-2008 and 2009-2018.

As always, these are just my own personal picks. This isn’t supposed to be some sort of objective list or anything. If I leave out a match that you think warrants inclusion, then please feel free to put it down in the comments section below. As with previous lists, I’ll be listing the matches in chronological order.

So without further to do, let’s get to it!