How have the females in your life reacted towards your love for wrestling?

In my experience, they’ve flat out loathed it. I had a serious one for 4 years, and she REFUSED to enjoy it. She’d pick up on things and then as I’m watching a match she’d walk by and say “Hey, has RVD hit the 5 star yet?” to which I’d perk up and say “Nope! But he’s gonna, you wanna sit & watch?” and she’d hit me with “Absolutely not, go to hell”.

I also thought I was alone in the ‘goofed up something sex related in the name of wrestling’, but apparently that’s happened to quite a few. For me, it was my girlfriend wanting a bit of the action, and this was like, 2 minutes before the first episode of the ECW relaunch. I was a massive ECW fan, and this was the biggest moment for me since WWE bought WCW. This was going to be magical! I wasn’t going to miss this for sex! Pssh.

It’s one thing to do that and it turns out to be Flair/Steamboat. But Sandman vs The Zombie?! Man, I didn’t hear the end of that one for months. Damn you, WWECW. Damn you.

What’s a match you guys feel is criminally under-rated? Something that no one ever really talks about that often, or at all.

For me, I’d have to go with either Warrior vs Savage II from SummerSlam 1992. Nobody ever talks about this one, which I find shocking because it’s the sequel to a classic, and it’s a hell of a match to boot. Clocking in around ****-****1/4. Also, Jericho vs Kevin Nash from Raw in 2003, the Hair vs Hair match. It’s a hell of a go, and honestly I’d place it in the Top 5 of Nash’s all time greats. It’s excellent, and Nash has one of the stupidest looking dye jobs of all time. I have the match clocking in around ****, and his dye-job at -***.

The moment when you realized wrestling was scripted. Or, if you didn’t have a moment per say, when you came around to it.

For me, it was when I was 14. Yeah, that’s old. I had pretty much knew what the score was, but the final nail in the coffin is when a friend of mine brought his uncle’s copy of what must have been the WON or something to that effect to school. I read about all this crazy backstage stuff, and how Macho Man agreed to do the 6-man tag at Starrcade 1997 so long as he got the pin. Right then I had to come to grips.

When I was a kid I’d argue with people, and say things like “You can’t fake a Razor’s Edge or a Jackknife!”. My mom would say things like “If the nWo isn’t under WCW’s employ, how are they making any money? And why wouldn’t WCW just call the cops?”. To which I’d say “Duh, mom, they have BILLIONAIRE Ted on their side. Plus, WCW knows that the nWo is all money, and all ratings. They don’t want to lose that!”

What’s the one moment/match you wish you were front row for?

I’d have to go with one of my all time favorites, Rock vs Hogan from WM18. I’ve always been a mark for Hogan, especially for the nWo. So, to get the nWo, plus a return of classic Hogan, I would have screamed myself voiceless during that match.

Most ridiculous/worst piece of wrestling merchandise you’ve ever owned? And not just owned, but PROUDLY owned.

For me, it’s the fake-gold Razor Ramon razor necklace I had in 6th grade. I LOVED that bad bitch, and use to wear it nonstop. I thought I was the coolest motherfucker on Earth with that thing. Also, it looked nothing like the one here in the photo, because it use to belong to a friend of mine, and was all beat up, and worn looking. I was the coolest. 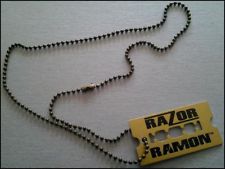 How say you guys?