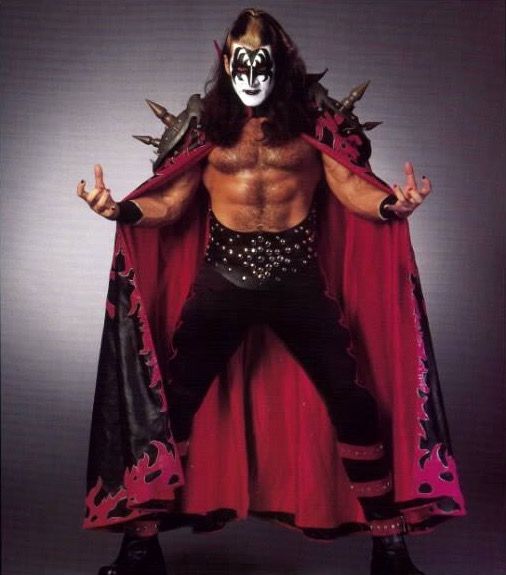 When you make a deal with a nostalgia act and stick a Power Plant nobody in Gene Simmons’s gear. Then set up a deal for a PPV Main Event without knowing how it’s gonna get over. The most “Because WCW” thing ever.

Welcome back to more “Dream Matches”! Today, we take our first look at the infamous WCW run of “The Demon”, Dale Torborg wrapped up in KISS gear and made to be an official “KISS Wrestler” in a giant failure of a gimmick. Here he’s a speedbump for Jeff Jarrett during his never-ending WCW Main Eventer run. Then it’s a hilariously bad match where The Disciple cuts an impassioned promo to beg the fans to cheer for him, then goes out and flubs horribly in a match against Kenny Kaos! I find one more Super Assassins match, as Warlord & Barbarian (in masks) go out against the Nasty Boys!

One more “PG-13 in WCW” match, as they try to take the WCW Tag Team Titles from The Mamalukes! Then it’s a pair of Essa Rios vs. Funaki matches, as they fill time on all the lower-end shows with Light Heavyweight Title defenses! And finally, I end my “Los Cowboys” run by finally slotting in their trios match with Tigre Canadiense (a forgotten white guy who got unexpectedly over in lucha) against Dr. Wagner Jr. & The Headhunters!

U.S. TITLE:
JEFF JARRETT (w/ The Harris Twins) vs. THE DEMON:
(WCW Saturday Night, March 11th, 2000)
* UGHHHHHHHHHH I forgot the Harrises were in the last-ditch “nWo”. And Jarrett is saying they’re in “Slapnut County” to get crowd heat and cuts this rambling, boring promo about putting Sid’s career “on life support systems”. He’s in silver shorts, up against the KISS Demon in a US Title defense, and poor Dale Torborg has to do his giant entrance, brandishing his cape like a doofus, all so Jeff can jump him from behind. 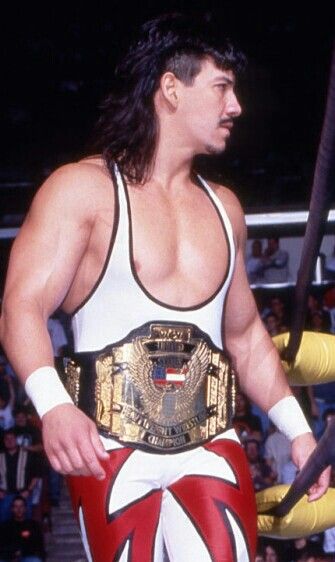 Lance Russell and Dave Brown are doing commentary for the last episode of USWA Championship Wrestling in 1995.  They are broadcasting from the WMC-TV5 studio in Memphis, Tennessee.

Russell and Brown inform fans that Jerry Lawler won the SMW Championship in Memphis from Brad Armstrong.  They remind fans that Bob Armstrong will not be on the show because he is banned from the studio.

Lance Russell and Dave Brown are calling the action, originating from the WMC-TV5 studio in Memphis, Tennessee.

Brown talks with Scott Bowden, who says PG-13 are not in the same league as the Rock N’ Roll Express.  He shows footage of the feud earlier in the year between the two teams to make it seem like the Express dominated it.

Lance Russell is back from vacation and he reunites with Dave Brown in the booth to call the action from the WMC-TV5 studio in Memphis, Tennessee.

Brown interviews Randy Hales, who announces that Bob Armstrong’s court injunction to prevent the USWA from acquiring total control of SMW is over.  From this point forward Armstrong is banned from WMC-TV5 studios.  Hales also announces a lumberjack strap match between Jeff Jarrett and Armstrong, a “loser leaves town” match between referees Gene Johnson and Frank Morrell, and a USWA tag team title match where Jesse James Armstrong and Tracy Smothers will defend against Doug Gilbert and a mystery partner.  No specific date is given for these matches since there will be no card at the Mid-South Coliseum on December 18.

Dave Brown and Corey Maclin are calling today’s action from the WMC-TV5 studio in Memphis, Tennessee.

Bob Armstrong comes out with Downtown Bruno, who is in a wheelchair and wearing a cervical collar.  Before Armstrong says anything important the show cuts to commercial.

Dave Brown and Corey Maclin are doing the announcing duties, returning to the WMC-TV5 studio in Memphis, Tennessee.

Corey Maclin is going solo today for this episode, taped from the Nashville Fairgrounds in Nashville, Tennessee.  The temporary switch out of the WMC-TV5 studio is nice because this venue is bigger and has more energy.  You can also see cigarette smoke wafting from the crowd on numerous occasions too as this was a time before indoor smoking bans.  And in a weird aesthetic, the promotion uses a white picket fence for a guardrail.

Lance Russell and Corey Maclin are in the booth for today’s show, which is a special “on the road” broadcast because of repairs being made to the WMC-TV5 studio.  The matches on this show come from the November 13 card in Memphis.

Lance Russell and Dave Brown are in the booth, broadcasting from the WMC-TV5 studio in Memphis, Tennessee.

Brown interviews Richard Lee, a longtime Tennessee manager to worked for Nick and George Gulas in the 1980s and then started working for Jerry Jarrett in 1985. He was best known for managing the Moondogs, who he hypes as the most violent team in the territory. On today’s show he is returning after being gone for three years and brings with him Moondog Cujo, a man he claims is going to bring more violence to the USWA.

Lance Russell and Dave Brown are reunited in the booth for today’s show from the WMC-TV5 studio in Memphis, Tennessee.

Russell interviews Downtown Bruno, who complains about what Doug Gilbert and Miss Texas have done to Brandon Baxter over the last few weeks.  Bruno says that he will be taking Baxter’s place as an ally of Smoky Mountain Wrestling.  He also complains about the recent treatment of Bob Armstrong.  This brings Armstrong out and he shakes Bruno’s hand before running down the USWA.  Armstrong hypes his son Jesse James and Tracy Smothers as his biggest weapon.

Dave Brown and Corey Maclin are doing the announcing duties against today and they are broadcasting from the WMC-TV5 studio in Memphis, Tennessee.

Brown and Maclin comment on pictures of the hospital elimination match in Memphis between Brian Christopher and Miss Texas against Jesse James Armstrong and Brandon Baxter.  They emphasize that Texas was busted open during the match.

The set of announcing musical chairs continues on this week’s telecast with Dave Brown and Corey Maclin calling the action from the WMC-TV5 studio in Memphis, Tennessee.

Lance Russell is back in the studio this week, calling the matches with Dave Brown.  They are broadcasting from WMC-TV5 in Memphis, Tennessee.

Russell interviews the Heavenly Bodies and Brandon Baxter.  Dr. Tom Prichard says that the Bodies are not happy that PG-13 is getting a crack at the WWF Tag Team Championship this week in Memphis.

Dave Brown and Corey Maclin are doing commentary for today’s show, coming from the WMC-TV5 studio in Memphis, Tennessee.

Brown and Maclin inform viewers that Billy Jack Haynes and Tracy Smothers are gone from the USWA after losing “loser leaves town” matches on the latest Mid-South Coliseum show.

Dave Brown and Corey Maclin are today’s announce team and they are calling the show from the WMC-TV5 studio in Memphis, Tennessee.

Chip Kessler and Les Thatcher are calling the action and they are concluding the tapings from Jellico, Tennessee.  This is also the go home show for Fire on the Mountain.

Jim Cornette tells Kessler and Thatcher that Brad Armstrong has no chance against his militia in a gauntlet match.

Lance Russell and Dave Brown are back in the booth and they are calling the action in the WMC-TV5 studio in Memphis, Tennessee.

Russell talks with Jesse James Armstrong, who is not happy that Randy Hales has suspended his friends in SMW.