“They definitely made the right call- it wasn’t Ugly Suzuki.”
-someone during a livewatch.

Word of Advice: Do not translate the comments left on Cutie Suzuki videos into English. Just trust me on this.

-Right in the midst of the Interpromotional Era comes this show- a JWP event with almost every match featuring an AJW invader, capped off by an Ace (vs) Ace bout- Dynamite Kansasi fighting the WWWA Champion, Aja Kong! Also wrestling is Kyoko Inoue against an up & comer, the legendary Chigusa Nagayo (on her JWP run to regather her strength) against Mayumi Ozaki, and an Idol (vs) Idol match- Takako Inoue & Cutie Suzuki! This is thus JWP’s biggest show ever up until this point, with major stars all over the place and a great Main Event. Weirdly, there’s no commentary at all for this show, giving it an odd feel… provided you notice it (I was 3/4 the way through Takako/Cutie before I realized “Hey, nobody’s talking here”).

“TL;DR- Why Should I Watch This?”: Standard-issue Joshi excellence, in that four matches hit around ****, and some rare “Dream Matches” you’ll literally never see again. The stars of  yesterday versus the stars of tomorrow is particularly excellent.

–Eric Bischoff, Bobby Heenan, and Steve McMichael are calling the action and they are live from Salem, Virginia.  According to thehistoryofwwe.com, the show drew a crowd of 5,000 fans, with 3,000 fans paying for entry.

–Gene Okerlund and Bobby Heenan handle the studio duties for today’s broadcast.  They open the show by hyping the Giant and recapping the Dungeon of Doom shaving WCW Champion Hulk Hogan’s mustache on Monday Nitro.

–As part of the Halloween Havoc Control Center, Kurasawa and Colonel Robert Parker rant about how Road Warrior Hawk is going down.  Hawk promises to do some intensive surgery on Kurasawa in Detroit.

And we’re back! The previous part had six matches on it, while this one, of equal length, only features four. But HOLY CRAP are they incredible.

TL;DR- Why Should I Watch This?: Because it’s got an even shot at being the greatest wrestling show of all time. Six matches break **** for me, and I’m pickier than any of the other Joshi fans on here, I think. It also culminates the stories of the 1992-93 stretch of Interpromotional Matches, especially the Hokuto/Kandori feud and the AJW/JWP Tag feud!

I actually split this with the final three matches being along, because HOLY SHIT this is probably the best ending to a card any show has ever had.

And we’re back! I cut this review in half since it was going to be an insane length, so here’s the last three matches. We last left off with a few multi-person matches, and Reggie Bennett making her AJW debut in a tag bout where she scored the winning fall over Suzuka “JTTS” Minami. And Kyoko Inoue scored a roll-up to defeat JWP’s Devil Masami in a big upset! 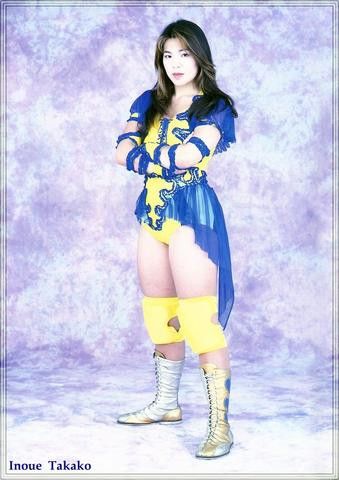 Behold the face of evil.

JWP had its own video game! Check out terrifying Command Bolshoi!

With AJW’s history out of the way, I can fill in the blanks with some stuff about their rivals of the 1990s! The most important two to any of AJW’s storylines were JWP and LLPW, though you saw some FMW crossover. The late ’90s brought out GAEA Japan as a chief competitor, and more came from that. For the most part, JWP was “AJW Lite”, while LLPW had a different, more mat-based “feel”. FMW had a much smaller division made up of a handful of wrestlers, usually acting in a single women’s match on a card full of men. Joshi avoided “Wacky Japanese Splinter Promotion Madness” for the most part until disillusionment over AJW management would shatter the industry after 1995, with every former AJW Main Eventer you can think of (Chigusa, Aja, Kyoko, Jaguar, even Mayumi) forming their own company (with beer! And HOOKERS!). This splintering led to a huge reduction in the once-huge Joshi fandom, and they went from filling arenas with 15,000+ fans routinely, to getting 1,000+ if they’re lucky.

I stuck with the ’90s stuff because otherwise this would be MUCH too long, and because I know jack squat about Joshi in the 2000s, so the whole article would be a mess of guesswork and possibly-false conclusions. And I don’t think Scott could take the humiliation of a poorly-researched article about women’s wrestling appearing on his blog.

THUNDER QUEEN BATTLE:
AJA KONG, KYOKO INOUE, TAKAKO INOUE & SAKIE HASEGAWA (AJW) vs. DYNAMITE KANSAI, MAYUMI OZAKI, CUTIE SUZUKI & HIKARI FUKUOKA (JWP):
(31.07.1993)
* I remember hearing about this match, or another with the same rules, years ago, and I totally fell in love with the idea. It’s basically an “Iron Man Tag” with eight people, but with a twist: The match starts out with two people in the ring, going for five minutes. Then another two start a match. Then another two, and finally the two Team Captains wrestle for five. Any falls counted in there count towards the total. And then the remainder of the bout is a forty-minute tag team bout, all falls again counted.

It’s a really amazing idea- the four separate matches to start act as “filler” and give the audience something different to look at (a 60-minute multi-tag match would get tiring no matter how good it was- too many bodies), and the Joshi style LOVES “early pinfall flukes” in matches where it wouldn’t be a disappointment (2/3 Falls matches tend to have one fall last a very short amount of time), so there’s some real drama. And then it’s 40 minutes of balls-to-the-wall action. The Joshi tag style is all about pinning someone and dealing with their partners running in, so it gets some good psychology going (you can’t just MDK someone; you have to MDK them AND have your teammates hold off three other people). And this match features bragging rights, as it’s three top names from AJW and JWP (rival companies), with each one sporting a Good Young Rookie Future Star. This is only a few months after the legendary Dream Slams- huge interpromotional shows that saw AJW drop some pretty big losses to other companies’ stars, and forging a good working relationship with many.

And now it’s the final part of the “Dream Slam” reviews, culminating with soem of the best matches fo the shows!

And now for the final part of my All Star Dream Slam review! Last time, we’d only had a couple of ****+ matches- here’s where the show gets GOOD.

Up next: probably the greatest stretch of great matches any show has ever had. This show (taking place on the 25th anniversary of AJW and intended to be a super-show as a result- thanks Manjimortal!) is one of wrestling’s legends for a reason.