–Tony Schiavone and Dusty Rhodes are in the booth and they are taped from Atlanta, Georgia.  According to thehistoryofwwe.com, the matches on this telecast were taped on September 27 and October 18 at Center Stage.

–Gene Okerlund and Bobby Heenan are handling studio duties today.  Heenan laments that he has tried to bring Ric Flair and Arn Anderson together but they are not listening to him.

–Okerlund puts over WCW calling cards that are coming to 7-Eleven stores in Detroit to hype Halloween Havoc.

–Eric Bischoff, Bobby Heenan, and Steve McMichael are doing commentary and they are live from Chicago, Illinois.  All of the announcers are sporting custom Chicago Bears jerseys, with Bischoff shockingly not wearing an old McMahon jersey to send another shot across the WWF’s bow.  According to thehistoryofwwe.com, 8,500 fans showed up to the Rosemont Horizon, with 4,458 paying for tickets.

–Heenan says that the Giant has been issued a restraining order and is outside of the arena, barred from coming in this evening.

–Eric Bischoff, Bobby Heenan, and Steve McMichael are in the booth and they are live from Denver, Colorado.  According to thehistoryofwwe.com, 9,000 fans attended the show but only 3,000 paid for their tickets.

–Ric Flair grabs Bischoff’s headset and tells fans that he is in Denver to get a piece of Arn Anderson.

–Tony Schiavone and Bobby Heenan are calling the action and they are taped from Orlando, Florida.

–Eric Bischoff, Bobby Heenan, and Steve McMichael are in the booth and they are live from Florence, South Carolina.  According to thehistoryofwwe.com, the show drew 5,000 fans, of which only 2,000 paid.

–Tony Schiavone and Bobby Heenan are doing commentary and they are taped from Atlanta, Georgia.  These tapings were done on August 21.  The Atlanta Braves are playing the Montreal Expos so this is a one-hour episode.

–Eric Bischoff, Bobby Heenan, and Steve McMichael are doing commentary and they are live from Johnson City, Tennessee, better known as one of the home bases of Smoky Mountain Wrestling.  According to thehistoryofwwe.com, 3,200 fans attended the show, with 2,031 paying for their ticket.

–Gene Okerlund is backstage, where Kevin Sullivan and the Giant arrive at the arena in the back of an ambulance.  The Giant tells Hulk Hogan that he is not immortal.  They are still playing up the angle that the Giant is Andre the Giant’s son.

–Tony Schiavone and Bobby Heenan are in the booth and they are live from Asheville, North Carolina.

–WCW Champion Hulk Hogan shows up in Asheville, North Carolina on the Harley Davidson motorcycle he received at Bash at the Beach and is surrounded by his fans.  Gene Okerlund interviews him, with Hogan hyping his journey through North Carolina, painting the Dungeon of Doom as anti-American.  This offends the Giant as he takes a Dungeon of Doom monster truck and runs over Hogan’s motorcycle, forcing Hogan and his fans to flee.  Hogan hilariously pounds on the side of the truck like a kid having a tantrum as the Giant laughs.

–Eric Bischoff and Dusty Rhodes are doing commentary and they are live from Asheville, North Carolina.  They treat the destruction of Hogan’s motorcycle as a national tragedy.

–Eric Bischoff, Steve McMichael (with his dog Pepe), and Bobby Heenan are doing commentary and they are live from Miami, Florida.  Bischoff announces that Vader is AWOL because he has “not filed proper documents” so now Hulk Hogan’s team is one man down going into Fall Brawl.

(Note:  With my school year resuming, my reviews will go to a posting schedule of Monday-Wednesday-Friday)

–Gene Okerlund and Bobby Heenan resume their studio duty roles and discuss the arrival of Lex Luger in WCW.

–Heenan laughs at the idea that Kevin Sullivan will face Hulk Hogan by himself if the Dungeon of Doom loses WarGames at Fall Brawl.

–Eric Bischoff, Steve McMichael, and Bobby Heenan are doing commentary and they are live from the Mall of America in Minneapolis, Minnesota.  Heenan begs off everything he said about McMichael in the week leading up to the show.  According to thehistoryofwwe.com, the show drew 2,000 fans.

–Gene Okerlund and Bobby Heenan are in the studio as per usual for today’s broadcast.  Heenan says he is bothered by the tensions between Ric Flair and Arn Anderson because they are good friends of his.  He blames Hulk Hogan for their problems.

Can Pierre Ouellet survive against Lex Luger? Also, Ramon and Diesel show off their talents. Included is al a developing story. Let’s rock!

Will Martel or Ramon become the new IC champion? What’s up with Borga? All this plus an SMW surprise in included. Doesn’t this sound like fun? 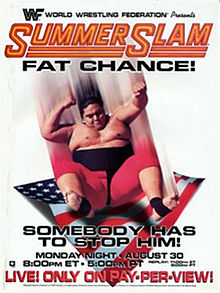 Can Luger stand up for America and defeat Yokozuna for the WWF title? Who will be the sole King of the WWF? Will Michaels and Perfect provide us with a “classic” match? Let’s find out!