Welcome back to more Dream Matches! This week, I have a huge “Wait, THAT happened?” match, as the BRITISH BULLDOGS face the ROCK ‘N’ ROLL EXPRESS! In the AWA. And it goes… well, let’s see why this isn’t a tape trading legend, why don’t we?

Next up, I continue my look at Manabu Nakanishi in WCW, as “Kurasawa” takes his martial arts to the “Macho Man” Randy Savage in a pair of matches set six months apart- the latter of which when Kurasawa had definitely entered the job squad!

And finally, remember last week when I subjected y’all to Sgt. Craig Pittman vs. The Cobra? Well now they’re TAG PARTNERS, and their opponents are the freakin’ Faces of Fear! This one actually ends up great… if you want to see how the mechanics of wrestling work, because Pittman here is SO BAD that he actually throws off all three other wrestlers, none of whom seem to know what to do with him flailing around all weird. It’s one of the greatest examples of a wrestler being such a stiff that nobody can do anything with him.

THE BRITISH BULLDOGS (Davey-Boy Smith & Dynamite Kid) vs. THE ROCK ‘N’ ROLL EXPRESS (Ricky Morton & Robert Gibson):
(AWA When Worlds Collide, 1989)
* This is a completely wild Dream Match I had no idea existed, as the Bulldogs typically existed in the WWF & Japan while the Express were mostly in the Southern companies/NWA. The Bulldogs are shredded to the gills here, just on ALL the steroids (especially Smith), while the Express are the same doughy guys they always were, absolutely dwarfed by their opponents (neither of whom were that big in the WWF). Makes you realize why they never did a run in the WWF around this time, ya know? The Express are in black & blue tights, and the Bulldogs are in their white & blue ones with the Union Jacks on the asses. Luscious Johnny Valiant is doing commentary, putting over the Bulldogs but mentioning that the Express match their experience. Legend Pat O’Connor is the ref here.

Welcome back to more Dream Matches! And I have more of the very stuff that made me come up with this column- horrible, horrible bouts that embarrass the very business! That’s right- it’s 1992 Andre and the most low-rent thing that maybe ever happened in a WWF ring- Ninja Turtle cosplayers!

So yep- we start off with one of those bizarre lucha Trios matches, this one involving Andre the Giant (at his most unhealthy-looking and bedraggled) and Bam Bam Bigelow of all people, teaming up with legend Dr. Wagner Jr. against three big-time stars in Canek, Villano III and FISHMAN! Yes, FISHMAN!

Then I watch a notorious one-off appearance of the “Toxic Turtles” (of course it’s the Executioners under the masks), as two guys in low-rent TMNT Halloween costumes face off against two jobbers in a squash so bad the crowd goes from “Wait… this is dumb” to “I am personally aggrieved to be subjected to this and want you people DEAD!” in record time!

The remainder is a mix: I wanted to check out more Kurasawa, so here he is being fed to The Giant in in-1996. And then there’s Eddie Guerrero vs. Psychosis from a Nitro around the same time!

ANDRE THE GIANT, BAM BAM BIGELOW & DR. WAGNER JR. vs. EL CANEK, VILLANO III & FISHMAN:
(Mexico, April 24th 1992)
* Haha, YES! Another “hit random on Fire Pro” Mexico match with a fading Andre the Giant, decked out in a red singlet that looks like it was cut out of a couch. And he’s teaming up with Bam Bam of all people, as well as Dr. Wagner Jr., one of those big stars & great workers who just never went abroad as much as his peers. Poor Andre is holding himself up via Doc, and can barely hoist himself up into the ring. The opponents are all big-name lucha guys- Canek is a major superstar, Villano III is the superior to his bros IV & V, and Fishman is apparently a huge ’70s star is now one of those “old slow dudes” by the ’90s. Canek’s in black, Fishman green & Villano in red- Fishman is REALLY bulky, with a ton of muscle mass and a bit of a gut. Canek is BROAD- a real powerhouse dude. VIII is a bit top-heavy, slender at the waist and delicately built aside from his chest/shoulder area. 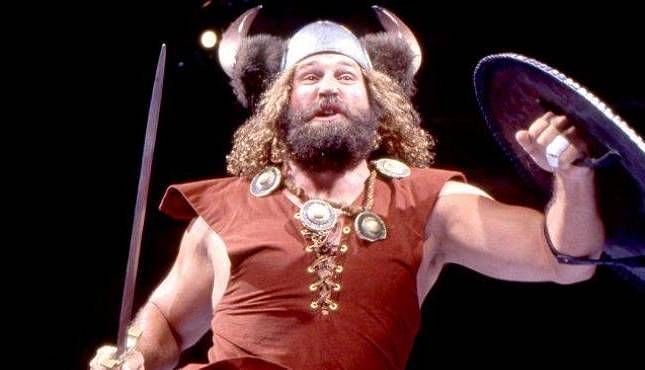 The Man, The Myth, The Legend- The Berzerker returns to my column! In a match that doesn’t suck!

Welcome back to more Dream Matches! This week, we have some surprisingly hard-fought, bludgeoning midcard matches to start us off, as the Big Boss Man faces The Berzerker on WWF Prime Time, and Sgt. Craig Pittman faces Kurasawa (Manabu Nakanishi) on WCW Nitro!

Also, I have Fire & Ice vs. The State Patrol, as the undersized veterans oddly control most of the match against their huge opponents Scott Norton & Ice Train. Then it’s more of Mortis & Wrath on the WCW midcard, as they take on Harlem Heat on Saturday Night, back when Jacequelyn was their manager! Then I watch Salvatore Sincere fall into the bottom-tier heel dead zone of “teaming up with a jobber” as he ends up wrestling the now-serious Godwinns on Shotgun… and we cap things off with one of Nitro’s most infamously bad matches, as Juventud Guerrera has to face the huge, way too green JOE GOMEZ!

THE BIG BOSS MAN vs. THE BERZERKER (w/ Mr. Fuji):
(WWF Prime Time Feb 17th, 1992)
* The greatest of all un-over failed midcard heel gimmicks, The Berzerker, actually gets another featured match in mid-1992 against the Boss Man! I don’t recall too many competitive Berzerker matches during this early part of my fandom, so this is fun.

–Tony Schiavone and Dusty Rhodes are calling tonight’s action and they are taped from Atlanta, Georgia.  According to thehistoryofwwe.com, these matches took place on November 29.

–Eric Bischoff, Bobby Heenan, and Steve McMichael are in the booth and they are live from Phoenix, Arizona.  According to thehistoryofwwe.com, the show drew 9,000 fans, 3,000 of whom paid.

–Bischoff announces that the WCW Executive Committee decided forty-eight minutes ago that Hulk Hogan, the Giant, and Ric Flair are all on probation and if they do something wrong, they could be indefinitely suspended.

–Tony Schiavone and Dusty Rhodes are doing commentary and they are taped from Atlanta, Georgia.  According to thehistoryofwwe.com, the matches on this show were held on November 16 and 29.

–Tony Schiavone and Bobby Heenan are doing commentary and they are taped from Orlando, Florida.  Heenan puts over his business partnership with New Japan, ignoring that he took their money fraudulently for half of WCW Pro.

–Gene Okerlund and Bobby Heenan are in the studio for today’s broadcast.  Heenan says that he is rooting for Sting on Monday Nitro because he cannot stand Hulk Hogan.  Due to Heenan’s WWF career, that is an awesome piece of character continuity.

–Tony Schiavone and Dusty Rhodes are in the booth and they are taped from Atlanta, Georgia.  According to thehistoryofwwe.com, these matches were taped on October 18 and 25.

WCW Prime for October 30 featured some new matches so we will recap those before moving on to WCW Pro.  Chris Cruise and Dusty Rhodes called the action on Prime.

–Tony Schiavone and Bobby Heenan are in the booth and they are live from Detroit, Michigan.  Schiavone says that Arn Anderson and Brian Pillman attacked Ric Flair before the show went on the air and Flair’s ability to compete later tonight is uncertain.

–Eric Bischoff, Bobby Heenan, and Steve McMichael are tasked with commentary and they are live from Huntsville, Alabama.  According to thehistoryofwwe.com, 7,000 fans attended the show with only 2,100 paying for tickets.

–Gene Okerlund and Bobby Heenan handle the studio duties for today’s broadcast.  They open the show by hyping the Giant and recapping the Dungeon of Doom shaving WCW Champion Hulk Hogan’s mustache on Monday Nitro.

–As part of the Halloween Havoc Control Center, Kurasawa and Colonel Robert Parker rant about how Road Warrior Hawk is going down.  Hawk promises to do some intensive surgery on Kurasawa in Detroit.