The Royal Rumble has come and gone and that means it is time to start the Road To Wrestlemania. Randy Orton retained the Raw World Title over Jeff Hardy last night, but the big story is the return of John Cena, who is back months ahead of schedule and wont he Royal Rumble. That means Cena is going to be coming for Orton sooner than later so let’s get to it.

Claudio Castagnoli revealed the advice he took from the Leader of the Cenation when he was still in WWE.

An independent wrestling promotion run by a former WWE Superstar has detailed how serious they were in their pursuit of Bray Wyatt.

Jim Cornette has commented on one WWE Superstar that makes him smile as he praises the presentation of a current champion.

Update On Thunder Rosa’s Injury, Heat With Two AEW Stars
Thunder Rosa is off the AEW All Out card through injury – but she can’t even stand two of her colleagues that are replacing her!

WWE Scrapping Plans To Move Programming To TV-14
If anyone would operate WWE under TV-14, it’s the company’s current regime – but it won’t be happening any time soon.

Vince McMahon Still “Has His Eyes” On WWE Business

Stephanie McMahon has claimed that retired Chairman Vince McMahon still has WWE business on his mind as he remains the company’s largest shareholder.

Triple H has explained his goals as WWE’s new Head of Creative and says he’s been working behind the scenes since almost his first day in the company.

Dave Meltzer Comments On Chances Of John Cena In AEW

With the wrestling world changing seemingly by the day, Dave Meltzer has commented on the possibility of WWE icon John Cena becoming All Elite.

Goldberg Wanted To Rip The Face Off Ex-WWE Star

Former World Champion Goldberg has given a stark take on a WWE star he was closely associated with, making his disdain for them very clear.

It’s the annual Tribute To The Troops show and this time around it happens to air on Christmas Eve. I can’t imagine that is going to go well for the audience numbers but this is a special show that gets some special treatment. The match quality isn’t going to be the point here either but let’s get to it.

Paige Recalls “Not Wanting To Be Alive” After Nude Photos Leak

Paige has opened up about “not wanting to be alive” anymore after nude photos and sexually explicit videos of the star appeared on the internet in 2017.

John Cena has added more fuel to the fire of speculation surrounding Bray Wyatt with a series of posts on social media.

Miro Admits He Was “Happy” To Be Fired By WWE

Current AEW star Miro has explained the reasons why his reaction to being let go by WWE was joy rather than despair.

Vince McMahon Made WWE Hall Of Famer Cry In His Office

It’s a very special night as John Cena is here to celebrate twenty years (to the day) of his WWE debut. That should be enough to carry the night and that might need to be the case. This is also the go home edition of Raw for Money In The Bank, meaning it’s time to build momentum, establish dominance, and maybe even come up with an original tagline for what the participants are doing. Let’s get to it.

Welcome back to more Dream Matches! So if you’re a fan of Sick Boy, you probably know the legend of him almost getting a big WWE push with the “Katie Vick” storyline, until he was cut loose for less-publicized reasons. Well come look at one of those reasons, as he faces OVW’s Prototype (a young, even more roided John Cena) in a Dark Match on RAW!

Also today, we’ll take a look at the DRAGON KID of all people making WCW TV, as he takes on Psychosis! Then some WCW Saturday Night goodness as it’s Wrath vs. Kenny Kaos! Also more of my “Essa Rios” series, as he takes on Crash Holly in early 2000! The Repo Man vs. “Superfly” Jimmy Snuka in 1993 (yes, Snuka was around EVEN THEN!)! A very “WCW Squash Match” as Lash Leroux goes up against Tommy Rogers of The Fantastics in 2000! And we end things with another WWF match, as Virgil gets fed to “The Narcissist” Lex Luger, shortly before his repackaging!

GUEST REFEREE JACQUELINE:
THE PROTOTYPE vs. SCOTT VICK:
(WWF RAW Dark Match, June 2nd 2002)
* Yes, this is a very rare match between John Cena and Scott “Sick Boy” Vick, back when Vick was in developmental. Prototype’s in blue & silver shorts, and Vick’s in black shorts, and is actually taller than Cena, I think- just lankier. 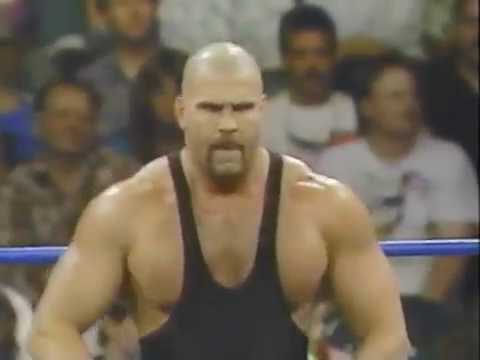 Imagine this look, minus about 20 lbs. of muscle, and you have 1992 Nikita Koloff.

Welcome back to more Dream Matches! I found another Jake Roberts match I never knew existed, though I guess he & Cactus Jack had a feud against Sting & Nikita Koloff in WCW when I wasn’t watching! So come see Jake versus a “just here for the paycheck” Koloff, as well as another Ron “H20” Waterman match, as he takes on The Prototype (aka John Cena on ALL THE STEROIDS)! Also a big pile of WCW D-Show nonsense, as we see Marty Jannetty vs. Horshu! The Wall vs. Rick Fuller, as the Wall’s weird WCW push continues! Bobby Eaton winding down his WCW run fighting BUZZKILL of all people! The Public Enemy take on the legendary Disorderly Conduct! And finally, Scott Norton versus El Dandy! Will we see Norton’s famously generous selling against smaller men? Wait and see!

JAKE “THE SNAKE” ROBERTS vs. NIKITA KOLOFF:
(WCW Worldwide, Aug. 25th 1992)
* !!! Okay, now THIS is interesting. I didn’t realize Koloff was still around back then, but he’s feuding with Jake & Cactus Jack alongside Sting . It’s fascinating, because without steroids and his “Just a guy in good shape” look, you realize that Koloff is noticeably smaller than Jake, which makes me think a Hogan/Koloff feud wouldn’t have QUITE the visuals Vince would want. Jake is wearing some weird patchwork tights while Nikita’s in a jobbery-looking singlet.

It’s the go home show for No Mercy and the show is mostly together. The big story continues to be John Cena vs. Randy Orton for the WWE Title, but we also seem to have the issues between Vince McMahon and HHH. The latter of those feuds comes to a head tonight as the two of them are facing off. Let’s get to it.

We’re on the way to No Mercy and the main event of John Cena defending the WWE Title against Randy Orton in a Last Man Standing match. That alone should be enough to carry the Raw side of the show but there is still time to fill in on the card. Maybe we can fill in some more of that this week, along with more Hornswoggle shenanigans. Let’s get to it.

We’re in that weird period where we have a lot of Summerslam rematches and some of them are a bit more interesting than others. There are a few interesting possibilities though, as Undertaker is returning to face Mark Henry and Randy Orton is getting another WWE Title shot at a furious John Cena. Let’s get to it.

We’re done with the waste of time that was Unforgiven and now it is time to start getting ready for No Mercy. Last night’s show was so important that they have already announced the main event for next month’s pay per view. John Cena got disqualified against Randy Orton, so it’s time for a Last Man Standing match for Cena’s title. Let’s get to it.

It’s time for the big reveal as this week will see the reveal of Vince McMahon’s illegitimate son. This is the kind of story that feels like it should be a huge moment, with Mr. Kennedy feeling like the likely surprise, but that pesky steroids suspension seems to be throwing a wrench into the plans. That should open up a new door too, so let’s get to it.

We’re actually taped this week as WWE is on its way to an international tour next week. Unforgiven is coming up later this month and we need a card, but there are going to be a few people missing. Late last week, a group of wrestlers were suspended for thirty days over connections with Signature Pharmacy, which had been linked to performance enhancing drugs.

We’re done with Summerslam and the big story is that John Cena defeated Randy Orton to retain the Raw World Title. That isn’t something I would have bet on and the ending so clean was even more of a surprise. Usually that would mean the end of a feud but that isn’t how things tend to work in WWE. Let’s get to it.

This is a bit of a weird show as it is built around the two World Title matches, but two of the other big matches involve people who have been gone for months. We’ll be seeing Randy Orton challenging John Cena for the Raw World Title while Great Khali defends the Smackdown World Title against Batista. At the same time, Rey Mysterio and HHH are back after some long layoffs, making the build for this a bit weird. Let’s get to it.