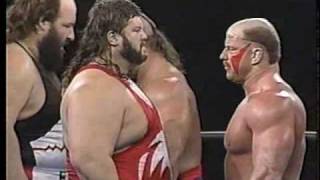 The height difference here is nuts. Like, Fred Ottman must always fight dudes of equal height because I completely forget sometimes that he DWARFS even men as big as Hawk.

Welcome back to more Dream Matches! This time, I found an AMAZINGLY fun Hoss Match from Japan as the Natural Disasters go up against the Legion of Doom… with their “Iron Man” theme and incredible overness in Japan! That and Earthquake’s sumo credibility make for an incredibly fun bout.

And I found a great grab-bag of weird stuff for the column today: Did you know that when the Truth Commission split up, Bull Buchanan and the other guy were paired up for a couple of weeks as a team before being sent away and repackaged? Yup- come see “Armageddon” take on The Quebecers! Also my “Best of Roadblock” series continues as he’s set up against a pissed-off, lethal Giant! More of Jimmy Del Ray’s weird run as “Jimmy Graffiti” as he takes on Eddie Guerrero during Eddie’s early babyface push! And we cap off with Al Snow and a very young, green Kane as “Unabom” up against… Matt Hardy and Joey Abs? God SMW was weird.

WWF TAG TEAM TITLES:
THE LEGION OF DOOM (Hawk & Animal) vs. THE NATURAL DISASTERS (Earthquake & Typhoon, w/ Jimmy Hart):
(SWS/WWF in Japan, 12/12/1991)
* Okay, this is a fantastic one I saw split up in two on YouTube. The Road Warriors are of course famous in Japan and here come out to their old-school theme, “Iron Man”, and HOLY SHIT is that a massive game-changer to their act. Even with the cartoon WWF red & black spikes it’s a totally different effect, as awesome as their WWF music was- this was BORN to be a wrestling theme. Earthquake is of course known and respected in Japan as a former sumo (undefeated but quit over injuries and cultural rules and such)- he’s billed “Earthquake” John Tenta here. Right away I’m astounded as the two teams square up and even Typhoon is MUCH larger than either man. Like, Hawk & Animal ain’t small but Ottman has a couple inches on either one. This is in two parts on YouTube.

Chip Kessler and Les Thatcher are in the booth and they are still covering action from the Jellico, Tennessee tapings.

Chip Kessler and Les Thatcher call the action, which is still from the Jellico High School tapings.