Editor’s Note:  The alternate title for this game is “Parallax’s dream job: The game”

“Everyone hates the President” said my Mother after I, yet again, bemoaned the extreme polarization of folks on various social media platforms toward Mr. Obama. I guess it’s true. But still, don’t these people on Facebook and Twitter and Disqus know how hard that job is? What the actual *job* of the President is? The hoops and loops and crap you have to jump through to get something done? Surely, the man running our country deserves at least a hint of respect – how can anyone *seriously* believe the President – Bush, Obama, Clinton, whoever – is actively trying to destroy our country, while *also* being incompetent and stupid.
I was not expecting, upon discovering and playing “Masters of the World: Geopolitical Simulator 3” to feel incompetent and stupid as the President supposedly is. Nor was I trying to destroy the country, but I managed that too.
You see, “Masters Of The World: Geopolitical Simulator 3” is a pineapple game. Rough, prickly, and inaccessible on the outside, but if you borough your way in, you’re rewarded with the sweet, sweet fruit of miles deep content and satisfying gameplay.
Although, ‘gameplay’ may not be the proper word, as you’ll be staring at legal proposals, swaying political leaders, and balancing budgets via an interface that isn’t the very exciting or polished. You’re presented a view of your country on a world map, given a series of buttons relating to revenue, security, environment, domestic & foreign policy, a few others, and are essentially told to have at it. Toss in weird 3D characters and text-to-speech dialog, and there’s a kind of weird, uninviting, held-together-by-duct-tape-and-silly-putty vibe to the game’s presentation.
Once you find your way around interface, you’re charged with appointing cabinet members, passing laws, balancing the budget, and setting about leading your nation to prosperity or turmoil. More than likely turmoil on your first playthrough or two because “Masters of The World” is more obtuse than a 359 degree angle. Unless you’re an actual student of politics or went to Harvard, a lot of the technical nitty gritty of running a country is going to require a lot of trial, error, impeachment, and trial again. 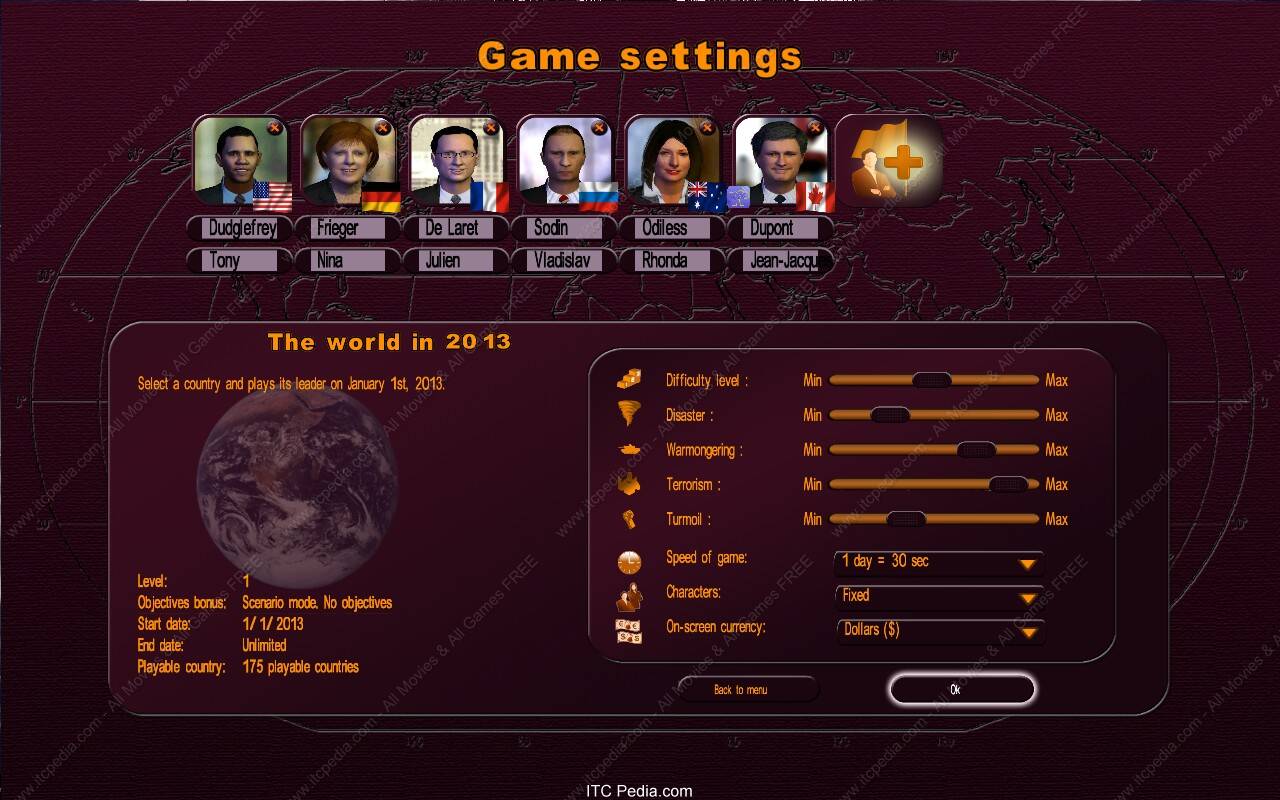 There is a tutorial hosted by a weird John Oliver looking fellow that helps with the multitude of mechanics, but fails to help you understand the nuance of political maneuvering. You’ll be confused about what people make good political allies, how to rally the proverbial troops behind a law, and if you even think about messing with any taxes or budgeting or staffing, you better know what the heck you’re doing, or prepare for a nation-wide strike. It’s easy to find yourself paralyzed by the options and their nebulous consequences.
Helpfully almost every potential law, enactment, and political issue comes with a handy link to wikipedia – which lends the title a subtle ‘edutainment’ vibe. If you want to be effective, you have to do some real world research. If you’re willing to invest the time researching real-life topics on real-life web pages, including things like budgeting deforestation taxes, and government entitlement programs, you’re in for quite the adventure. Scheduling meetings with the Speaker of the House to rally support behind legalizing gay marriage is enjoyable, and as the date of the vote approaches you will be meeting with every leader you can to see if they can sway support.
These meetings don’t have a lot of nuance to them on the surface. You meet with a political figure, ask them to support the bill, and they will if they like you enough or won’t if they don’t. What’s clever is you can influence the ‘like’ rating by passing laws in line with their ideology. Another way to influence voting is to create a reform. So if you mix in stuff democrats really like with one or two things Republicans really want, the odds of that reform bill – with multiple laws, being passed goes up.
And this is where that whole pineapple thing comes in. I equate “Masters Of the World: Geopolitical Simulator 3” to something like a high-end flight sim for politigeeks in that I have a hard time calling it a ‘game’ in the strictest sense of the word. All of this content is interesting and enjoyable, but not really thrilling – and hard to get a grasp on. Sure, there’s a novelty to simply invading Canada just because, or trying to legalize pot, gay marriage, and gambling nationally at the same time, but to get your money’s worth, you gotta play it right, and playing it right is probably not the typical gamer’s idea of fun.
But there’s also nothing else quite like it – save 1991’s “Shadow President” and a seemingly blossoming subculture of message-board driven D&D-esque U.S Government roleplaying games similar to online E-feds for wrestling fans. But lending a face (even if it’s a grotesque, puppety one) and voice to the people running the country give the game a personality, it makes the simulation feel a little more real. 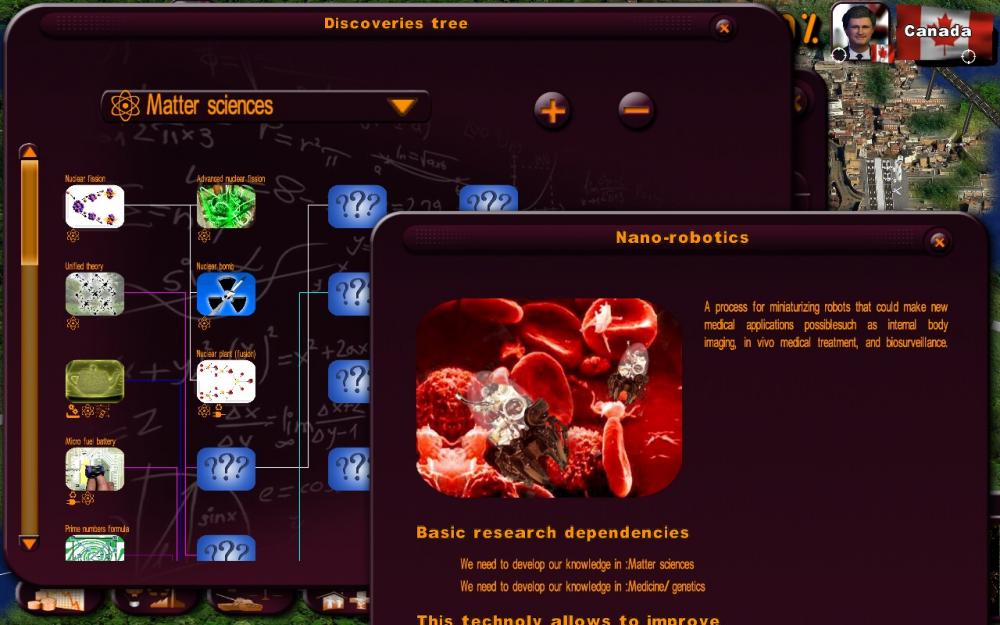 If you worship at the altar of “The West Wing” or CSPAN’s website is your home page – I’d give it a shot. I’ve barely scratched the surface of what this game offers – I haven’t dabbled in playing as another country, nor have I tried being a Republican to see how that would go, but after pouring hours into “Masters Of The World: Geopolitical Simulator 3” I feel comfortable recommending it to anyone who thinks it’s their cup of tea. Sure, the game is finicky, a little buggy, and if you breath on it wrong it could crash, but the various interconnected systems work well enough together to present an educating and brain-teasing experience that may just teach you something about the world we live in and provide some insight to boot – the least of which is running the country ain’t all it’s cracked up to be.
3.5 Stars.

Blog of Doom Exclusive Note: This is essentially the TEW of Politics – almost TOO in depth for its own good, whereas EWR was just in depth enough while still having a casual appeal.
Rants