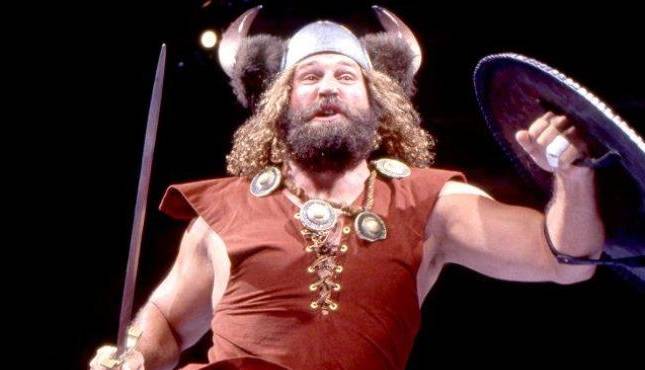 Finally- I’ve found more Berzerker matches to watch! And against VIRGIL, no less!

Welcome back to more Dream Matches! I’ve got some wild stuff today- Virgil vs. The Berzerker in late 1992! A heel Glacier vs. Sick Boy in 1998 WCW Nitro! Repo Man continues his undercard heel run against JTTS legend Koko B. Ware in 1993! Poor “Squire” Dave Taylor has to face rookie Chase Tatum on a D-show! Then it’s ERIK WATTS vs. Silver King in 1998 WCW! Finally, it’s a pair of Wrath vs. Al Green squashes in the last months of ’98, and an all-time dream match caps us off- The Disciple versus LIGHTNING FOOT, Jerry Flynn!

THE BERZERKER vs. VIRGIL:
(WWF Prime Time, Dec. 28th 1992)
* This is way late in the Berzerker’s run, as he has no manager (having dropped Mr. Fuji). Virgil’s in white & black striped tights, and is the company’s resident JTTS. However, he seems to get a REALLY good reaction here, with fans noticeably jumping up and cheering. The size difference here is pretty profound- John Nord DWARFS him. The Barbarian was a big, strong, legit-tough dude, but a WORLD TITLE CONTENDER? On PPV? No wonder WCW lost so much money.

Welcome back to more Dream Matches! This week I have a sequel to last weeks’ Jake/Koloff match, as it’s Jake & Barbarian vs. Nikita & Ron Simmons, the WCW World Champion! Then, it’s one of the stranger “two guys you didn’t think ever met” contests, thanks to Erik Watts’ run in late ’90s WCW, where he takes on Disco Inferno on TWO separate occasions! Then it’s a giant Hoss Match as The Giant takes on Roadblock on WCW Nitro, in a match with a remarkable ending that’s stuck in my mind for 25 years! More Essa Rios content, as he & Funaki take on the Hardy Boyz back when Rios was “Papi Chulo”! Then it’s a shockingly very good Wrath match, as he & the underrated Mike Enos fight like hell on a filler WCW Thunder bout! With some commentary you really have to hear.

JAKE “THE SNAKE” ROBERTS & THE BARBARIAN (w/ Cactus Jack) vs. RON SIMMONS & NIKITA KOLOFF:
(WCW Power Hour, Oct. 17th 1992)
* By recommendations, here’s Jake & Barbarian as WCW heels vs. Ron Simmons (the WCW World Champion!) and Koloff. Jake’s in blue, Barbarian’s in black, Ron’s in green and slapping hands with the fans, and a very bored-looking Koloff is in a black singlet. Nobody seems nearly as over as they should be considering this has the World Champ and the guy he’s wrestling at Halloween Havoc in a week.

Watch the Funk Brothers, Stan Hansen, Bruiser Brody, Jimmy Snuka AND Giant Baba all get into it!

Welcome back to more Dream Matches! This time, I take a look at the early 1980s of All Japan, because I was curious about just what the Funk Brothers were like in their 30s (the answer: Still old!). And they’re taking on another gaijin team- the brawling mega-heel Bruiser Brody, along with “Superfly” Jimmy Snuka himself!

Also, prepare for some torture as we dive further into the career of one ERIK WATTS- two matches featuring the blandest, most forgettable tag team in WWF history, and one from his bizarre 1999 WCW comeback! That’s right- it’s time for some TEKNO TEAM 2000! Watts & Chad Fortune team up against Barry Horowitz & the Brooklyn Brawler, then the Smoking Gunns! And then watch ’90s Dudebro Heel Watts up against the legendary jam-up guy, El Dandy!

REAL WORLD TAG LEAGUE 1981- FINAL MATCH:
THE FUNK BROTHERS (Terry & Dory Jr.) vs. BRUISER BRODY & JIMMY SNUKA (w/ Stan Hansen):
(All Japan, Dec. 13th, 1981)
* Damn, so Snuka has wrestled in Japan before. And here he is teamed up with legendary psychopath Bruiser Brody against the Funks, at this point beloved heroes in All Japan. Dory merely looks to be 75 here, as opposed to his usual self, while Terry has the curly hair and looks reasonably in shape. Both Funks are in blue trunks, while Brody & Snuka are in black (Broady with furry boots) and backed up by Stan Hansen. Jimmy looks like he’s only had a dinner plate full of cocaine compared to how much he was using in the WWF, and looks weird with boots and normal wrestling gear on. I’ve literally never seen a Brody match before this, so this will be interesting.

Lance Russell and Dave Brown are doing commentary from the WMC-TV5 studio in Memphis, Tennessee.

Russell interviews Tommy Rich.  Rich says that he is going to drop a bomb on the USWA.

PG-13 cut a pre-taped promo, promising that the Gambler and Brickhouse Brown are going to pay for beating them on last week’s show and winning the tag team titles. 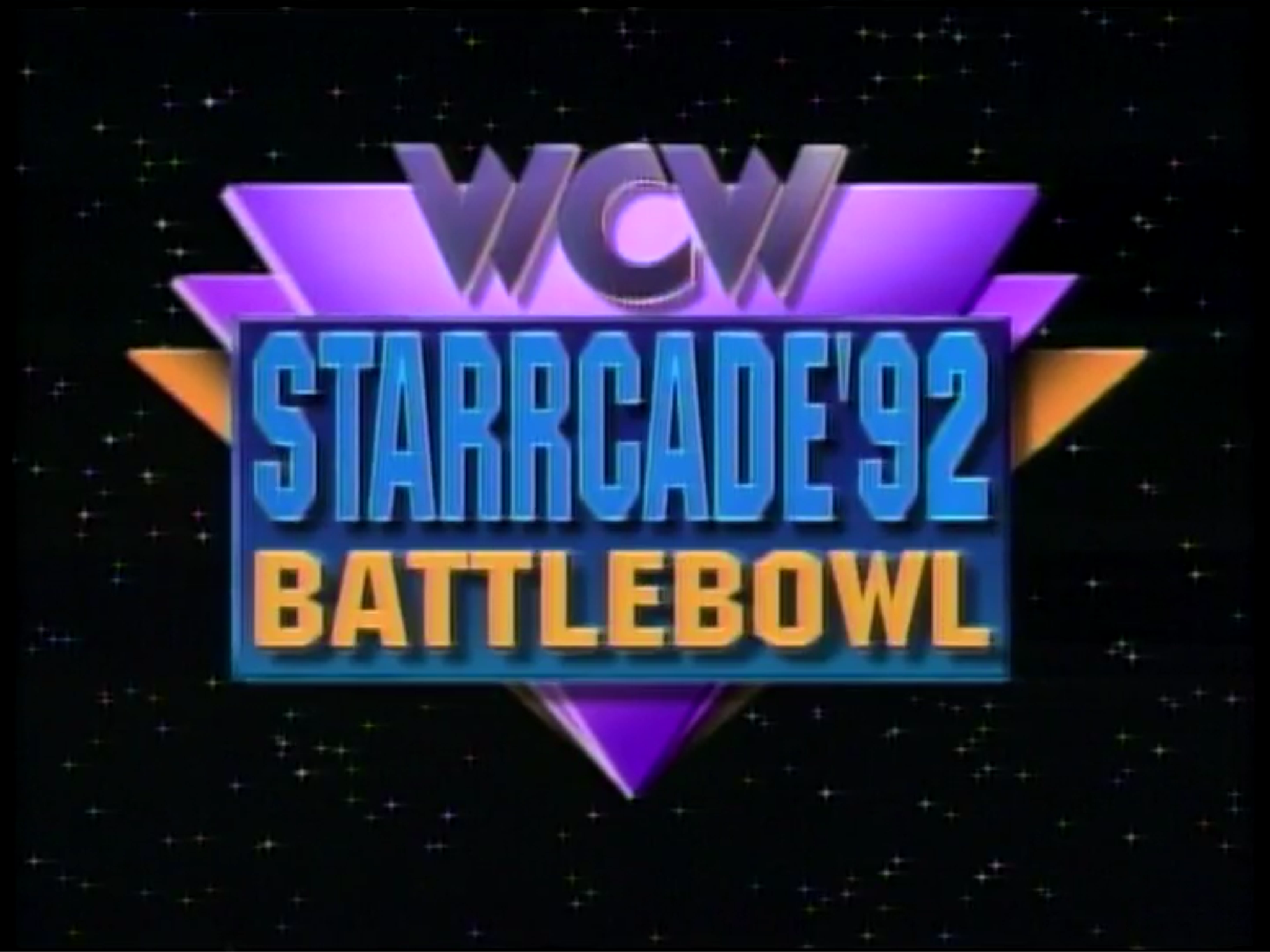 I’ve finally managed to get Worldwide back in the rotation – and not a moment too soon! Z-Man! Johnny Gunn! Nothing but the biggest names on the planet!

TONY SCHIAVONE and JESSE VENTURA welcome us to an actual arena in Alabama. Tony’s displaying a quality part on the mid-right side of his head, with the kind of precision that lets you know, yes, this is the 90’s. PAUL ORNDORFF saunters on camera, and he starts screaming about Rick Rude’s injury. He apparently knows exactly what needs to be done. And what needs doing? Whether it’s Milwaukee, or Philadelphia, he’s going to have a match with Steeng. What of Atlanta? St. Louis? Murfreesboro? Does “Steeng” not work those territories?