We’re done with Full Gear and Hangman Page is FINALLY the AEW World Champion. To say this is a long time coming is an understatement but now we get to see where things go from here. That could be in a variety of directions but this week is all about the big celebration. We have a long way to go before Revolution next year so let’s get to it.

We are rapidly approaching Wrestlemania Backlash and that means it is time to start hammering the card home. However, that is going to have to wait this week as there is a major main event. In this case, that means Roman Reigns defending the Universal Title against Daniel Bryan, who has to leave Smackdown if he loses. Let’s get to it.

We’re less than a month away from Wrestlemania Backlash and it looks like we might be coming up on a big Cesaro match. The question now though is who that will be against, as the options seem to be Roman Reigns, who Cesaro challenged, and Seth Rollins, who interrupted that challenge last week. Let’s get to it.

Tonight it’s a double elimination as WWE continues to pour caustic soda down the NXT drain. But never mind that, check out Percy Watson’s new shirt: 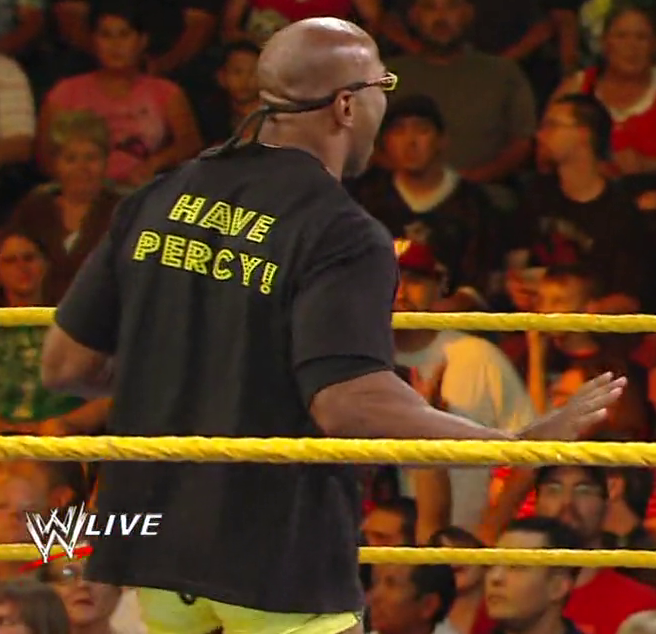 It’s time for the second half of the show and hopefully it is just as good if not better than last night. This time we have the main event of Roman Reigns defending the Universal Title against Daniel Bryan and Edge, along with four more title matches. That should make this feel more like a complete Wrestlemania, though I’m still not sure on whether I like one or two nights better. Let’s get to it.

It’s the go home show for Wrestlemania and for once, there are some important things actually happening here. This time around we have the Andre the Giant Memorial Battle Royal, plus a Smackdown Tag Team Title match. Normally I would have an issue with the titles being defended on Smackdown instead of the pay per view, but considering they have not been defended since Dolph Ziggler and Bobby Roode won them in January, how important can they be? Let’s get to it.

No this isn’t going to be a normal thing but here’s a bonus for Wrestlemania week.

It’s the go home show for Wrestlemania so it’s time for the really important recap videos. I don’t expect anything new in the way of wrestling but there is no reason to think otherwise around here. This kind of show is about as perfect as you can get for Wrestlemania week, but they still need to do it right. Let’s get to it.

We are running out of shows before Wrestlemania and the card is mostly set. WWE has already announced that the Smackdown Tag Team Titles will be defended (for the first time since they were won almost three months ago) and that we will get the Andre the Giant battle royal next week, but that leaves a lot of things to cover tonight. Let’s get to it.

We’re in Laredo, Texas for the post-Eli Cottonwood era. It’s only been a week and I already miss the blithering idiot. As people have explained, he made an appearance in the original FCW version of The Wyatt Family so thanks for letting me know he had One Last Bungle.

It is time to start the real final push to Wrestlemania because we are finally done with Fastlane. There is a really strong possibility that Daniel Bryan is added to the Wrestlemania main event and after the pay per view, that is the best thing that they could do. Other than that, there is a good chance that we are going to be able to see something else added to the show, as we have three Smackdowns left. Let’s get to it.

It’s time for the show that doesn’t exactly seem like it needs to exist but actually doesn’t look too bad on paper. There are some matches here which could be pretty good, though you never can tell with a show like this. A lot of the promise might come from the fact that the expectations are so low, but take whatever you can get. Let’s get to it.

It’s the go home show for Fastlane and that means we need to add a few matches to the card. I’m sure you can guess a few of them from here, which may or may not be the best thing. The big match tonight will see Edge wrestle his first singles match on Smackdown in ten years when he faces Jey Uso for the right to be the ringside enforcer for Daniel Bryan vs. Roman Reigns at Fastlane. Let’s get to it.

We’re on the way to Fastlane and that means it’s time for a contract signing. You knew this was coming and while it is coming off of a good match, it is still one of WWE’s more annoying booking tropes. Maybe they can come up with something more interesting tonight but I doubt it. Let’s get to it.

It’s time for a big fight feel as Daniel Bryan vs. Jey Uso is taking place inside a cage. If Bryan wins, he gets the Universal Title shot against Roman Reigns at Fastlane, so I’m not sure how much more they can telegraph what is going on here. I’m curious to see what Bryan can get out of him though so let’s get to it.