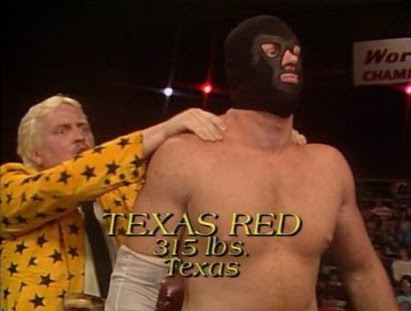 I found more Jobber squashes! A combination of stiff squashes, huge botches that go on to be legends (everyone familiar with Triple H knows THIS one), and basic worked ass-kickings combine as we look at some of the bigger squashes you’ll see. I missed Maffew’s requests until I was done writing this one, but I can get to those next week!

So yes, come see one of the most notorious finisher botches around as Hunter Hearst-Helmsely faces Marty Garner! A great squash with scrawny, pasty geek Colin Delaney on WWE’s version of ECW getting annihilated by Bid Daddy V after the funniest “aw golly gee whiz” jobber promo ever! Rick Steiner doing his best to annihilate the big, burly Bubba Howard in WCW! And then it’s an all-time squash as Big Van Vader hits UWF-International in Japan and absolutely murders Tatsuo Nakano in a worked-shoot squash!

Also a rare shot of a JOBBER UNDERTAKER, as Mark Calaway does a rookie gimmick as “Texas Red”, a masked muscleman, as he jobs to Bruiser Brody… and unwisely starts CALLING SPOTS and fighting too rough with the grumpy veteran. And then the time Rick Rude splattered Jim Powers’s face with a flying ass slam

HUNTER HEARST-HELMSELY (w/ Regina Evans) vs. MARTY GARNER:
(WWF Superstars, 6/1/96)
* Another famous botch in this one. HHH at this point was being led to the ring by a different floozie every night (usually a local model, which they always take great care to name on-camera)- this time he actually makes out with her, which I don’t remember seeing much of. Garner is a skinny tanned guy with a ponytail and goatee- I love the pink & white tights, haha. Helmsley at this point was fairly tall and lanky-looking, with a far softer physique than his bloated roid one in later years. This is right around when he started getting punished for his part in the “Curtain Call”, as he’s about to fight Jake Roberts in the King of the Ring tournament on RAW.

We’re still under special guest control as HHH is running things this week. This time around, that means John Cena and Randy Orton are going to be facing the entire roster, which probably isn’t going to go as described. At least it sounds different though and I’ll take that over more of the same. Let’s get to it.

Wrestlemania continues to inch closer and thankfully it seems that Chavo Guerrero can finally move on from CM Punk and find a new challenger for the ECW Title. This week is about the Tag Team Titles though as Tommy Dreamer and Colin Delaney are challenging Miz and John Morrison for the Smackdown Tag Team Titles in an Extreme Rules match. Let’s get to it.

We’re still on the Road to Wrestlemania and somehow, again, we’re getting CM Punk vs. Chavo Guerrero for the latter’s ECW Title. This is setting a new standard for trying to squeeze every last drop out of an idea and there absolutely cannot be much left to wring out of the feud. Maybe tonight can wrap it up for good. Let’s get to it.

We’re on the way to Wrestlemania and this week isn’t likely to have Ric Flair for a main event. Chavo Guerrero vs. CM Punk should be done for good but you never can tell with that feud. It feels like it could somehow keep going despite being long past its expiration date. If not Punk though, who else is supposed to go after the title? Let’s get to it.

We’re done with No Way Out and on the way to Wrestlemania, which probably won’t mean much for ECW. Chavo Guerrero retained the ECW World Title by defeating CM Punk, again, and that means we need something else on the way to Orlando. I doubt we get that this week, but you have to start somewhere. Let’s get to it.

The now seemingly never ending feud between Chavo Guerrero and CM Punk continues after Punk knocked Guerrero into the Gulf of Mexico last week. We are still on the way to their next match at No Way Out and odds are Guerrero is going to do something to get back at Punk this week. Let’s get to it.

We’re in the Chavo Guerrero era and last week saw a rather obvious mariachi reveal (there’s a weird statement) as CM Punk is still trying to get his title back. Other than that, we have Tommy Dreamer standing up to help the eternally injured Colin Delaney, which could go in a few directions. Let’s get to it.

We are done with the Royal Rumble and that doesn’t mean much for ECW. Given that the new ECW World Champion Chavo Guerrero was in the Rumble and competing for a shot at a title rather than being the possible champion being challenged, there isn’t much to be excited about around here. I’m sure CM Punk will want some revenge though so let’s get to it.

It’s the go home show for the Royal Rumble but the bigger story here is that Chavo Guerrero is getting his shot against CM Punk and the ECW World Title. I say biggest with a bit of tongue in cheek because Chavo is only so interesting but maybe they can pull something off. Let’s get to it.

We’re coming up on the Royal Rumble, which isn’t likely to mean much around here. This show is more concerned with Chavo Guerrero getting another shot at a title shot against ECW World Champion CM Punk, because two times wasn’t enough yet. We do have a guest star this week though, as Smackdown World Champion Edge is here. Let’s get to it.

We’re still in the CM Punk Era and this time that means he has to deal with Chavo Guerrero. I’m not sure why either, but given how many challengers have just been dropped, Guerrero could at least offer some stability. Other than that, Miz and John Morrison are continuing their pretty sweet feud with Jimmy Wang Yang and Shannon Moore. Let’s get to it.

We’ll start a new year right here and that means things are not going so well for ECW World Champion CM Punk. In addition to dealing with the monsters in Mark Henry and Big Daddy V, he has to deal with the heel that will never go away in Chavo Guerrero. That’s where we are after a week off to close out the previous year so let’s get to it.

We’re done with Armageddon and ECW World Champion CM Punk has his hands full with Big Daddy V, who pinned him in a tag match at the pay per view. Other than that, there is a good chance that this week’s show is going to be a bit lighter ala Raw, which isn’t a bad thing given the holiday season. Let’s get to it.

We’re in Norfolk, VA and less than a week after his release, Braden Walker is already a meme. 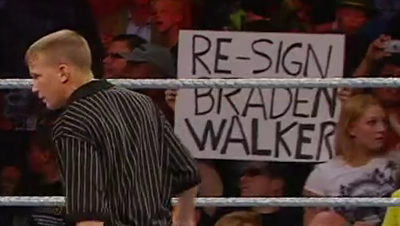 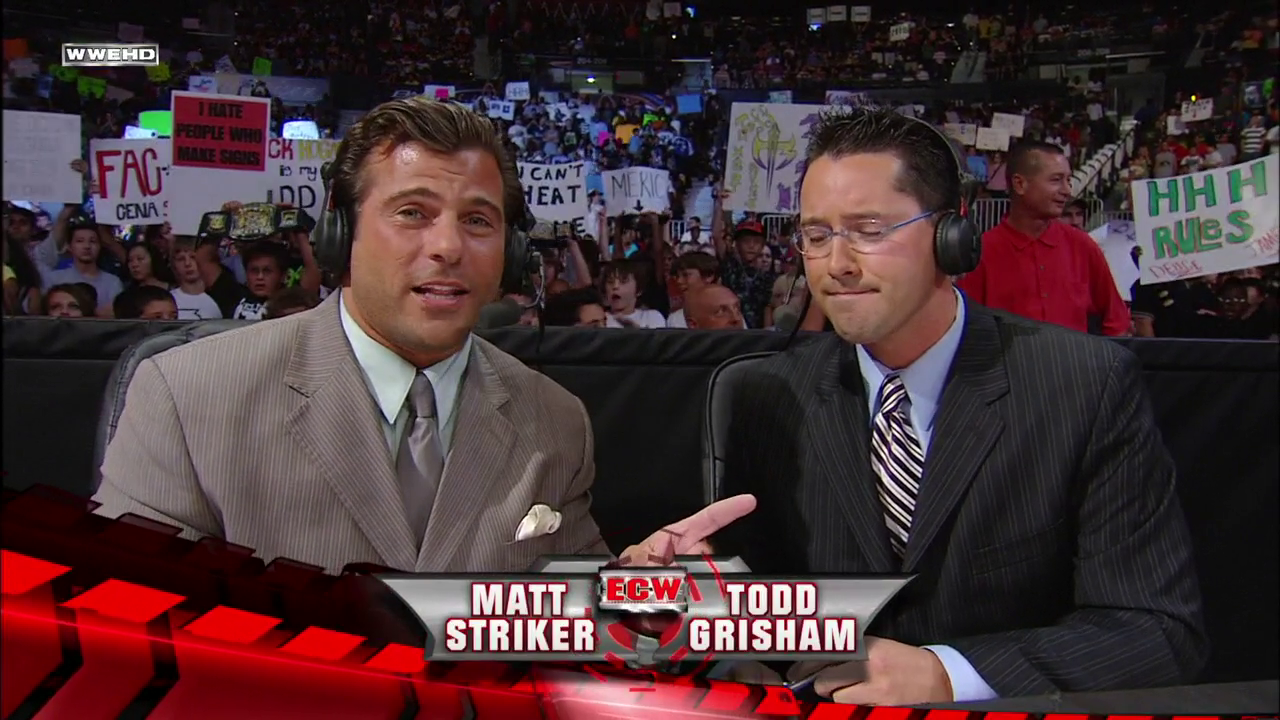 Todd Grisham starts the show by announcing Matt Striker is ”temporarily” replacing Tazz on commentary in the same way his Dad was temporarily going to get cigarettes. Striker says he may not fill up as much space on screen as Tazz but he’s better looking as Striker is still in character. I think.

We’re in Hershey, PA and Tazz tells us change is here with Mike Adamle becoming the Raw GM (oh god oh god) so he introduces us to ECW On Sci-Fi’s newest commentator, Tod Grisham. Well Adamle has turned into ellipsis-filled white noise these last few weeks so he can’t be any worse. 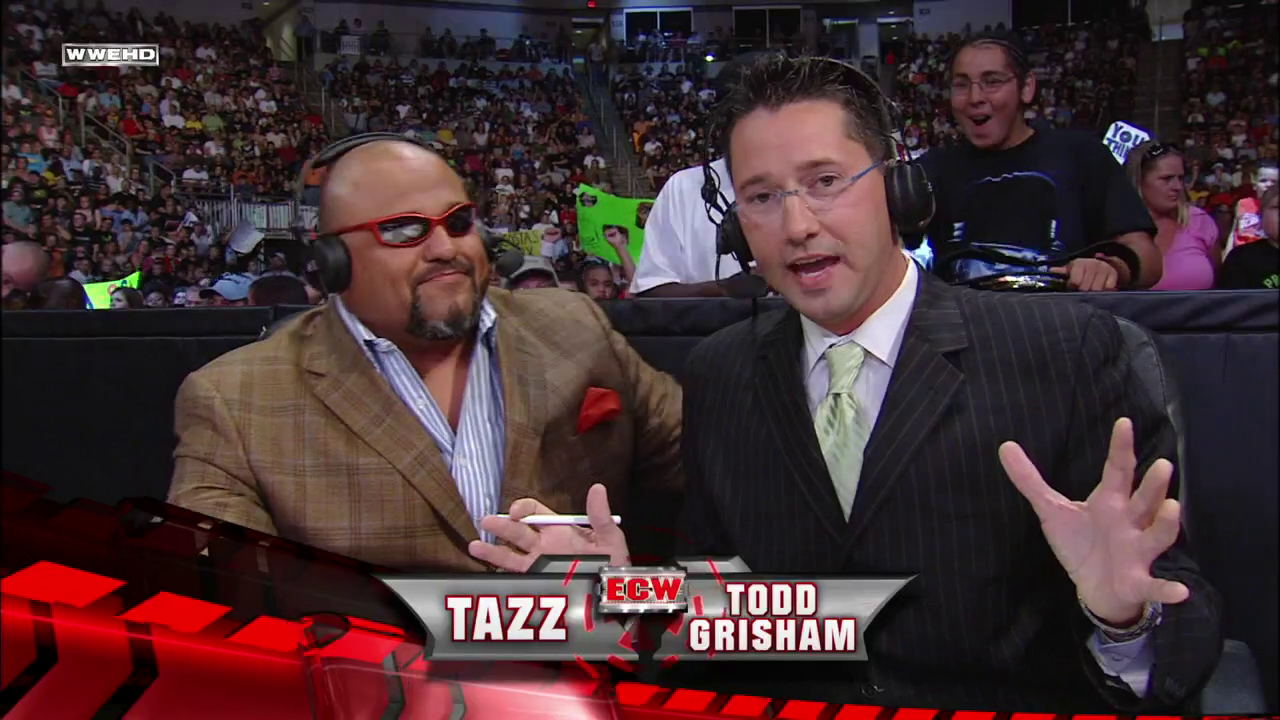 We’re in Baton Rouge, LA and to correct my glaring error last week, Kofi Kingston got drafted the week before winning the IC Title from Jericho so he’s gone which is good for his career but sucks for ECW on Sci-Fi as the feud with Shelton Benjamin and partnership with Evan Bourne had been the highlight of the year for the brand so let’s see what’s going to fill the gap.

It’s been a few weeks since the last ECW on Sci-Fi recap due to my hard drive dying and getting locked out of The Blog Of Doom so I’m glad there’s a news-worthy episode or this would have been ”Savio Vega at NWO 1998” levels of anti-climax.

It’s the show after Night of Champions but that’s only half the story: Around sometime the week before the show, Michael Hayes got drunk on doot-doot-doot and declared he was ”more of a N-Word than you” to Mark Henry, who somehow didn’t see the funny side of the N-Bomb being dropped by a guy that used to wear the Confederate Flag on his face