Sean Mooney and Bobby Heenan are hosting this evening’s show.

The Rockers squash from Superstars is shown.

Lord Alfred Hayes narrates a segment about the WWF’s semitrucks that get production gear from place to place.

The one with Macho Man headlining the Korakuen Hall!

Gorilla Monsoon and Bobby Heenan are in the booth, calling the last show of the taping cycle from Cornwall, Ontario, Canada.

Make sure to cast your Doomie nomination ballot!  Deadline ends at midnight on Sunday.

Sean Mooney and Bobby Heenan oversee the studio portion of the show.

WWF Champion Hulk Hogan puts over his momentum, saying that it is too much for Ric Flair to overcome.

Sean Mooney and Bobby Heenan are the hosts for tonight’s program.  Mooney is carrying a Big Bossman wrestling buddy because the Bossman will be a guest on the show.

Irwin R. Schyster does a taped promo about how the Big Bossman does not pay taxes on the bribes he collects. 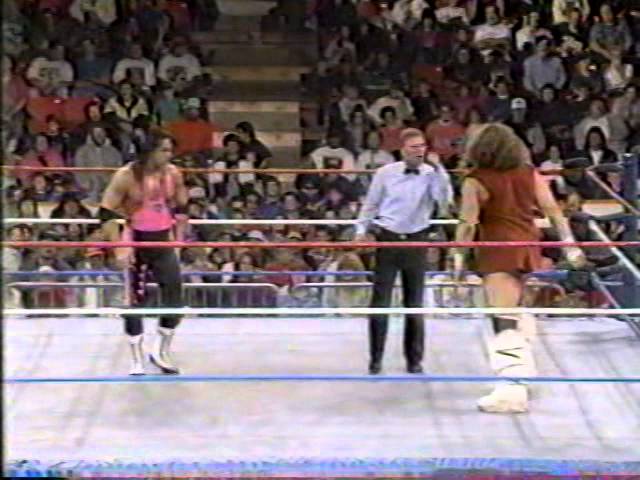 Welcome back to more Dream Matches! This time I have a bunch off stuff, led off by Bret Hart vs. The Berzerker for the WWF Title! After that, it’s a request for the Motor City Machine Guns (Sabin & Shelley) vs. Finn Balor & Ryusuke Taguchi for the IWGP Jr. Tag Titles in New Japan! I also check the Funk/Hansen feud again, as it’s Terry & Dory Funk vs. Stan Hansen & Bruiser Brody! And the best of Well Dunn continues, as they get a shot at the WWF Tag Team Titles, as they face Fatu & Samu- the Headshrinkers!

WWF WORLD HEAVYWEIGHT TITLE:
BRET “HITMAN” HART vs. THE BERZERKER (w/ Mr. Fuji):
(WWF Wrestling Challenge, Nov. 1992)
* Bret Hart defends his newly-won WWF Title against the Berzerker in Regina, Saskatchewan, proving himself to be the “Fightingest Champion in WWF History”, as his M.O. at the time was to build credibility and respect by a constant stream of TV wins over the entire lower and midcard. As he had recently been just an IC-tier guy, it was pretty brilliant, especially as a key component of his act was being a more “human” guy in a world of cartoons, and his best aspect was his in-ring skill vs. his promos- this could then be shown off more often. 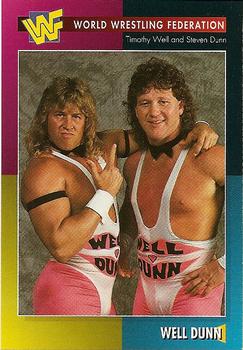 Boy, I hope you guys like Well Dunn, because I went on a tear of YouTube clips featuring the lowest-tier heel team in WWF history! My god, they faced the Blus, Headshrinkers, and did all sorts of trios matches! This column will be a veritable “Best of Well Dunn”! I bet you can’t WAIT!

Welcome back to more Dream Matches! I fill this one with a handful of oddities today, as we get an ever-rare “Bret & Owen Hart in a tag team” match, as they dress like a real tag team and take on an actual team in the bottom-tier Well Dunn shortly before the “Hart Brothers vs. Not-Jerry Lawler and His Knights” Survivor Series match!

After that, it’s a follow-up to last week’s column, as Terry Funk & Stan Hansen meet each other again, this time with Dory Funk Jr. backing up his brother and Terry Gordy backing up Stan! Then it’s something that’s apparently an old tape-trader classic, as the “Gotta get all the Sabu matches we can find!” days saw a lot of Sabu vs. Chris Candido matches on fancams! Oh, and I didn’t want this to be only three matches long, so I stick in a WCW Prime jobber match- “Dirty” Dick Slater & Bunkhouse Buck vs. Los Especialistas! I was hoping they’d be some interesting Luchadores… but no.

BRET & OWEN HART vs. WELL DUNN (Timothy Well & Steven Dunn, w/ Harvey Whippleman):
(WWF Wrestling Challenge, Nov 14th 1993)
* Hahahaha HELL YES, couldn’t find Harts vs. Steiners on YouTube, but I have THIS! Well Dunn were two indie tag guys just slapped in singlets with goofy thongs over top and thrown out there to die as a “Fake Featured” tag team that just jobbed to all the top ones. I didn’t realize they’d been fed to the Harts. They’re in black singlets & purple thongs this week, and hey, wasn’t Well in better shape? He looks pasty and with no physique here. Of more interest is the Hart Brothers’ matching outfits- Bret’s in all pink (his regular look temporarily) and Owen’s in all BLUE, dropping his parachute pants and lacking the black singlet he’d later wear for the rest of his life. For “Gear Nerds” like me, that’s a very unique look, especially as a duo.

Vince McMahon and Bobby Heenan are in the booth.  This show took place in Worchester, Massachusetts, the same site as the recent Superstars tapings.

Rope-assisted or not, JESUS CHRIST.

Welcome back to more Dream Matches! This one I have a varied set of tag matches, interspersed with a terrible singles match! We start off with a random TV tag match between the newly-heel Men on a Mission and the Allied Powers (Lex Luger & British Bulldog), largely inessential save for one of the absolute motherfuckingest strength spots I’ve ever seen in wrestling on the part of Davey-Boy.

I also take an interesting look at the mentor figures of two guys we’re a lot more familiar with outside of Mexico, as it’s Rey Mysterio & Rey Mysterio Jr. vs. Fuerza & Juventud Guerrera! Yes, our beloved Rey with his uncle, teaming up against a very young Juice and his own dad (who was a POWER wrestler, believe it or not!). Then it’s a request, as the “Million Dollar Corporation” gets a prelude as Ted DiBiase takes on Nikolai Volkoff in 1990 for one of Volkoff’s last matches before he left for a while. And finally, we have the last few minutes of a semi-infamous Hart Foundation vs. Legion of Doom match- an all-time Dream Match that Bret says was ruined by Hawk downing some somas immediately beforehand. It’s mostly interesting as an historical curiosity (and for a pretty great finish, actually).

MEN ON A MISSION (Mabel & Mo) vs. THE ALLIED POWERS (Lex Luger & British Bulldog):
(WWF TV, May 14th 1995)
* A wild match setting up the newly-heel Men on a Mission (pre-King Mabel) against the Allied Powers- a “Superteam” of sorts that just never got that big push. The M.O.M. have shifted their gear to add black to the purple & gold scheme, while Lex & Bulldog are in matching red white & blue gear with their own flags.

Gorilla Monsoon, Bobby Heenan, and Jim Neidhart are on commentary, beginning a new taping cycle in Portland, Maine.  According to thehistoryofwwe.com, the taping took place on July 30 and drew a crowd of 7,756 fans.

A replay of Jake Roberts’ heel turn on Superstars is shown.

Bobby Heenan is shown speeding into the parking lot because he is late.  He knocks over some traffic cones and puts a “Doctor on Call” notice on his dashboard before rushing into the building.

Issues Between CM Punk And AEW Could Thwart Potential Dream Match
A potential dream match could already be off the table as issues between CM Punk and All Elite Wrestling continue to rumble on.

Shawn Michaels Discusses Whether He Was A Better Wrestler Than Bret Hart
The debate over Shawn Michaels vs. Bret Hart has waged for decades, and Michaels himself weighed in on the issue.

“The Criticism Is Valid, But The Source Is Not” – Jim Cornette On Braun Strowman Controversy
Jim Cornette thinks there’s some merit to recent tweets made by Braun Strowman, but he also believes Strowman isn’t the right person to deliver the message.

Now-AEW star Chris Jericho has claimed that Chyna may have sabotaged a match between himself and Triple H.

Following a relationship that was only ever described as ‘rocky’ at best, Bret Hart has revealed when he and Shawn Michaels became friends.