Gene Okerlund and Bobby Heenan host this evening’s show.  Heenan says that Vince McMahon is having some cosmetic work done.

After showing footage of Tugboat’s turn on Superstars, Jimmy Hart walks into the studio laughing.  Hart says that Tugboat has sunk and he has big news.

Gorilla Monsoon, Bobby Heenan, and Jim Neidhart provide commentary as fans get a new cycle of episodes from Tempe, Arizona.  According to thehistoryofwwe.com, the taping took place on May 29.  Heenan shows off the fifty cent gift he got his dad for Father’s Day.

Vince McMahon, Randy Savage, and Roddy Piper are in the booth, starting a new taping cycle in Tucson, Arizona.  According to thehistoryofwwe.com, the taping took place on May 28.  Piper opens up a Father’s Day gift from his “Jamaican children.”  The gift is a tie that Piper wraps around his neck.

The Legion of Doom’s squash from Prime Time Wrestling is the opening bout.

Vince McMahon and Bobby Heenan provide commentary.  This show was part of the Superstars taping in Pensacola, Florida which, according to thehistoryofwwe.com, took place on March 11.  It aired on USA Network on Sunday, March 17.

A replay of the Virgil-Haku match from Superstars airs.

Gorilla Monsoon and Bobby Heenan are in the booth, concluding the tapings in Cape Girardeau, Missouri.

Welcome back to more Dream Matches! This time I hit a request from a couple weeks back, as the Hardy Boyz (then indie darlings and not WWF superstars yet) take on Sabu & Rob Van Dam in a one-time-only match! Then we get an amazing HOSS MATCH as the Steiner Brothers and Fire & Ice just got buckwild and murder each other with suplexes for six minutes on Nitro. Then it’s Andre the Giant & Giant Baba taking on Terry & Dory Funk in All Japan from 1990! And then I torture you all by featuring the No-Limit Soldiers (B.A. & Swoll) vs. Lenny & Lodi doing an offensive gay gimmick from the dying days of WCW! Finally we end with a “Dream Matches” MVP, Roadblock, taking on one of the Texas Hangmen (maybe the Disorderly Conduct guy!). Read on!

TORNADO TAG TEAM MATCH:
SABU & ROB VAN DAM (w/ Bill Alfonso) vs. THE HARDY BOYZ (Matt & Jeff Hardy):
(All Star Wrestling NWA Legends Show, Feb. 11th 1998)
* Okay, huh? I’ve never heard of this, but it’s before the Hardys meant anything, as they were merely respected job guys at this point in the WWF, with their own spotfest indie promotion (OMEGA). It would be Sept. 1998 when they properly debuted as “featured” guys in the WWF, after being trained by Dory Funk Jr. for a bit. This is some All Star Wrestling show in Greenville, North Carolina. RVD was still with ECW at this point, and Sabu was suspended around this time (might be later). The camera work here is… not great. Very grainy, pixelated and stuck in one corner. Sabu’s in orange, RVD’s in light tights (I can’t tell the color), and the Hardys are in matching checkerboard baggy pants.

Andre & Baba versus two 6’7″ guys so bad even Vince didn’t want them. I’m in love. So how bad do you have to be to have neither Vince nor Eric want you when you’re that big? Read on!

Time for more Dream Matches! This time, I’ve found one of those things that opens up the floodgates- wrestlers I’ve never heard of before who send me on a YouTube-fest that bring sup all sorts of weirdo matches! Come see two  6’7″+ guys even VINCE didn’t want as the “Land of Giants” take on Andre the Giant & Giant Baba in 1990!

Also, we have two bouts from the same episode of Prime Time Wrestling, as Jake Roberts takes on Typhoon and Paul Roma goes up against The Dragon! And then a match recommended to me a week ago- Dean Malenko vs. SURFER-era Sting from Nitro! And we’ll cap things off with the WCW Saturday Night debut of one Bill Goldberg, as the “Best of Roadblock” series continues! Can Bill defeat the 6’7″ guy who almost never wins? Who knows?!?

REAL WORLD TAG LEAGUE 1990:
ANDRE THE GIANT & GIANT BABA vs. THE LAND OF GIANTS (Butch Masters & Skywalker Nitron):
(All Japan, 25.11.1990)
* Oh my god you GUYS. This is Andre & Giant Baba in their retirement tour as crippled old men, and they’re taking on two gigantic dudes I’ve never heard of! I have to know everything about these guys now. Looks like they’re two never-was acts (Nitron sniffed WCW for a second as “Big Sky” and that’s all the Big Two has for them), both about 6’7″ or so but with physiques like the Young Bucks and knock-off Ultimate Warrior facepaint. Oh wait… Big Sky/Skywalker Nitron was Sabretooth in the first “X-Men” movie! It’s Tyler Mane! And he has a goddamn bleached RAT TAIL haircut! Butch has more fashion with a regular brown mullet. I love this match already. 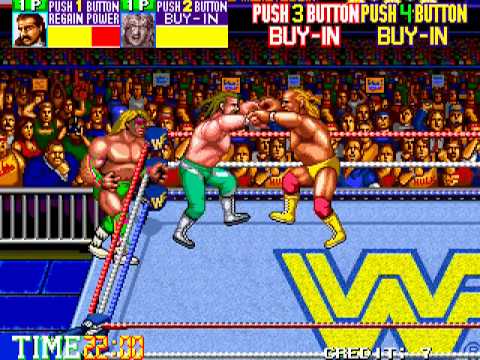