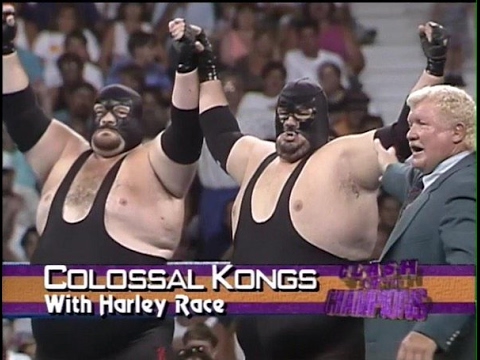 The only Big Fat Heels I’ve never heard of- the Colossal Kongs! And HARLEY RACE was their manager! While he was managing Vader!

Welcome back to the final Dream Matches column of 2021! And true to form, I fill it with Big Fat Guy matches! This week, we’ll be taking a look at a request that netted me TWO bizarre matches- bouts featuring the Colossal Kongs! First, we see the pair of rotund near-clones as they take on two of the Four Horsemen- Arn Anderson & Paul Roma! Then we see one in a strange JTTS match against Ric Flair of all people, as Flair tries to use his “Broomstick TV Match” template on a hopeless obesitron!

Then take another look at mid-90s Nitro mishmash bouts as Lord Steven Regal takes on a young, masked Juventud Guerrera! And we see Freddie Joe Floyd for one final time, as I’ve run out of matches of his- here he teams up with Barry Horowitz as the “Elite Jobber” team up against… the Headbangers! Yes, Freddie Joe Floyd and the Headbangers interacted! How’s THAT for a wacky “Dream Match you never knew you needed”?! Then watch the strange circumstances of WCW boldly hiring away ECW’s 911 only to use him as a piece of shit jobber, taking on Ice Train on the D-show! And then it’s a glorious Fat Guy Dream Team as the One Man Gang teams up with John Tenta against the Armstrong Brothers… sadly, it’s Tenta as The Shark, but still! This would have been a mega-team in 1990!

THE COLOSSAL KONGS (Awesome Kong & King Kong, w/ Col. Rob Parker) vs. ARN ANDERSON & PAUL ROMA:
(WCW, Oct. 24th 1993)
* Shockingly, the Kongs are a pair of Big Fat Heels I’ve NEVER HEARD OF, but were apparently in WCW for a little bit. They debuted separately, but looked similar enough that they were eventually paired up, but neither ever became anything. Rob Parker is subbing for Harley Race, said to be busy with Vader at the moment. Awesome Kong is the hairier one of the two. And they’re taking on two of the Four Horsemen, which at this point features infamous failed star Paul Roma. Roma’s in long white tights and Arn’s in manly powder-blue trunks.

This card was the largest of ECW’s Holiday Hell Tour in December 1995, taking place at the Lost Battalion Hall in Queens, New York on December 29.  According to thehistoryofwwe.com, the show attracted a sold-out crowd of 1,283, the largest to see an ECW event to that point.

Joey Styles provides commentary for the evening’s events, working solo as per usual.  He starts the show in the ring, putting over ECW’s debut in the New York City area.  Stevie Richards and the Blue Meanie interrupt so Richards can put himself over for a few minutes and question the sexual preferences of fans at ringside.  Missy Hyatt is spotted in the crowd and Richards tries to put the moves on her, but Hyatt is reluctant until Richards tells her that she can get Hyatt a date with Raven.  Hyatt kisses Richards, telling him to give that to Raven and Richards marks out to a chorus of boos.

A video package recaps the feud between Rey Misterio, Jr. and Psicosis.

Joey Styles talks about how Woman controls all the titles in ECW.  He acknowledges rumors on the WCW Hotline that WCW Champion Randy Savage wants Woman to manage him.  However, Styles says that Woman has given her word that she is staying with ECW.  Call the ECW Hotline to find out more!

Joey Styles handles the commentary for the show, which took place at the ECW Arena in Philadelphia, Pennsylvania on November 18.  According to thehistoryofwwe.com, the show drew a sellout crowd of 1,150 fans.

Buh Buh Ray Dudley walks to the ring to do guest ring announcing duties for the Broad Street Bully-Don E. Allen opener.  He is accompanied by the other members of the Dudley clan except for Dudley Dudley, who is no longer part of the company.  Buh Buh is wearing a top hat and suit coat like he is running a circus.  Buh Buh gets through the welcome until he tries to mimic Michael Buffer and stutters over the word “rumble.”  Frustrated, Buh Buh takes out the jobbers with Buh-Buh Bombs.

Joey Styles commentates the matches, which come from the ECW Arena in Philadelphia, Pennsylvania on September 16.

Joey Styles calls the action, coming from the ECW Arena in Philadelphia, Pennsylvania from August 26.

A recap of Cactus Jack’s heel turn at Wrestlepalooza ’95 airs.

ECW Champion the Sandman and Woman talk about how they love thinking about Mikey Whipwreck and the Public Enemy lying in a poor of their own blood.  The Sandman adds that Whipwreck is a boy trying to do a man’s job.

Highlights of Tommy Dreamer, the Pitbulls, and Luna Vachon fighting Steve Richards, the Vampire Warrior, Raven, and the Dudley Brothers in Florida is shown.

Joey Styles calls the matches on the card, which come from ECW’s July 21 show from Tampa, Florida.

A video package showcases some of the action in Fort Lauderdale.  A lot of attention is paid to a brawl between Raven and Steve Richards against Tommy Dreamer and Luna Vachon, with Raven and Richards laying Vachon out with a double DDT before Dreamer cleared the ring with a foreign object and smashed Raven’s hand.

Highlights from Heatwave ’95 are shown.

Joey Styles hypes this week’s tour of Florida, as well as the Steiner Brothers debut at the Orange County Fairgrounds in Middletown, New York on July 28.

Joey Styles does commentary for the show, which took place at the ECW Arena in Philadelphia, Pennsylvania on July 15.  According to thehistoryofwwe.com, the show drew 1,000 fans.

This is like what happens when you hit “Random” in Fire Pro.

RANDOM DREAM MATCHES:
* So randomly searching YouTube for stuff, I found some true gems and some weird stuff, and decided to make a thing of it. This first one is just BONKERS and it got a great reaction when I posted it in the live thread a week back, so I had to share it here. Some are ironic “LOLWTF THOSE guys wrestled!?!” while others are legitimately good. A few of these are WWF & WCW matches posted on YouTube, so I won’t post them here (it demonetizes the blog or somesuch thing), but they’re easy to find.

ANDRE THE GIANT, EL CANEK & VILLANO III vs. KOKINA MAXIMUS, BUFFALO ALLEN & BLACK SCORPIO:
(Universal Wrestling Association, Mexico, 03.05.1992)
* Yes, it’s YOKOZUNA, BAD NEWS BROWN & 2 COLD SCORPIO! Fighting ANDRE, plus Mexican legend El Canek (one of the few guys to slam Andre) and Villaino III (elder brother of IV & V). This is like what happens if you hit “Random” in Fire Pro to make your teams- Andre dressed in a red singlet teaming up with fighting Yokozuna, Bad News Brown and 2 Cold Scorpio! Andre is BEYOND washed up at this point, while Yoko is almost ready for his WWF run, being not quite as fat as he’d be in his 450-lb. debut. Andre’s in a red singlet, Canek’s in white, and Villano’s in blue. Kokina’s in black trunks, Allen’s in his usual black, and Scorpio is wearing a yellow mask and long tights- he’s got a great physique here, too.

Joey Styles does the commentary from the ECW Arena in Philadelphia, Pennsylvania.  The show took place on July 1, 1995 and, according to Dave Meltzer’s Wrestling Observer for June 10, it drew a crowd of 1,075.

Joey Styles does commentary for the show, which took place at the ECW Arena in Philadelphia, Pennsylvania on June 17.  According to thehistoryofwwe.com, the card drew a crowd of 1,150 fans.

Joey Styles is handling commentary for this show, which took place at the ECW Arena in Philadelphia, Pennsylvania on May 13.  According to thehistoryofwwe.com, the show drew 875 fans.

Joey Styles does commentary for this show, which originates from the ECW Arena in Philadelphia, Pennsylvania.  According to Dave Meltzer’s Wrestling Observer for April 17, the show drew a crowd of 1,150 fans.  Styles says that Sabu is a no show due to Japan commitments.

Raven, Steve Richards, and the Broad Street Bullies come out.  Richards tells the Bullies that they need to win their match tonight to prove themselves.  If they lose, they will be fired.  Richards tells Raven that he has recruited the Pitbulls, who will be better than the Bullies.

A lengthy video package hypes the three-way dance that is booked for the ECW Arena on April 8.

Joey Styles provides commentary for this broadcast, which features matches from the March 18 ECW Arena show.

Joey Styles is coming from the ECW Arena in Philadelphia, Pennsylvania.  He welcomes out Ron Simmons, who is in a sour mood.  The feeling is reciprocated by the ECW fans.  Simmons is upset that Styles did not call him a former world champion and All-American.  He vows to beat down anyone who gets in his way.