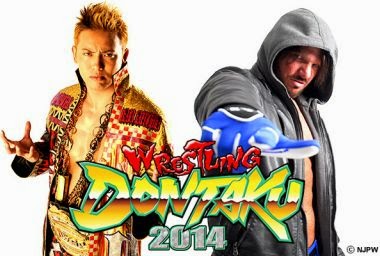 IWGP Jr. Heavyweight Tag Team Title: Matt Jackson
& Nick Jackson (c) vs. Rocky Romero & Alex Koslov:
I feel like the Young Bucks would be money in WWE. They
are incredibly athletic and can do some flat out crazy acrobatic things in the
ring. They just need to learn the psychology behind when, where, and why to do
something. It would make their matches feel more structured rather than at times disjointed. They have all the tools; they
just need to read the manual, kind of like Tyler Black before he came to WWE. Nick hops off the corner, attempting to kick
Romero. Romero ducks out of the way, making Nick accidentally kick partner in the
face. Koslov fights off both Nick and Matt after he receives a hot-tag. He does his trademark dance /kicking spot.  Koslov
lifts picks up Romero and he catches both the Young Buck’s with a
knee. Nick comes back with a shining wizard that gets a two-count. The Bucks
hits their Spiked Tombstone on Romero, but Koslov breaks up the pin. The Spike
Tombstone looks extremely lethal but loses so much significance as just a near-fall
move. A move like that should not only finish a match, but also put someone out
of action. They send Koslov to the corner, setting up the More Bang for Your
Buck. They hit it and it ends this @ 15:09. A little over the top and goofy, but it had solid action and got the crowd into the
show. It would have been better if it had some letup, but it’s worth noting that Romero and Koslov felt at home as rah-rah babyfaces.** 3/4
Special Tag Match: Toru Yano and Takashi Iizuka vs. Minoru Suzuki and Shelton Benjamin:
I’ve heard terrible things about this. Some have actually called it the worst match of the year. This starts off with them all fighting on the floor. Suzuki hits Yank with a chair and then Suzuki and Iizuka exchange in a horribly contrived chair
dueling spot. Shelton hits Iizuka with a superkick as Yano exposes the steel
turnbuckle. Suzuki enters the ring and tries to put Yano into a rare-naked
choke. Iizuka sneaks behind him to choke him with a chain. After more lethargic
brawling, this borefest finally ends when Iizuka and Shelton brawl into the
crowd  and Suzuki pushes down the referee to draw a DQ @ 9:04. They handcuff Suzuki to the ropes, but he breaks out and hits Komatsu repeatedly with a chair until it breaks. It wasn’t the worst match of the year so far, but it was pretty close. Poorly booked and called in the ring. There were too many moments where the wrestlers didn’t know what to do and way too much unenthusiastic brawling. Everything was very discombobulated, and the finish was straight out of WCW or TNA.  DUD
NWA World Heavyweight Title: Satoshi Kojima (c ) Wes Briscoe:

Briscoe is living proof that you can get by on your family’s merits. Wes works over the knee of Kojima. He does not break a five
count after having in a leg lock, which gets some jeers from the crowd. I don’t know why he wasn’t DQ’ed. Anyways, Kojima fights back with chops and that Brisco to close his eyes due to the pain. Kojima hits the Koji cutter but only gets a two count out of it and then hits a lariat to pick up the win @ 9:52. After the match, Stan Hansen presents
the title to Kojima. Please, no more Briscoe. He’s green in every facet of wrestling and shouldn’t be wrestling in front of camera until he dramatically improves. Kojima tried, but he would have been better off working with a broomstick.
Hirooki Goto & Katsuyori Shibata vs. Yuji Nagata &
Manabu Nakanishi:
Both Shiata and Nagata brawl on the floor. Shibata hits a running boot, forcing Nagata to hit
the mat hard. Back in the ring, they go back and forth with slaps and boots to
the face, ending with Shibata hitting a running knee into Nagata’s gut.
Nakanishi goes to the top-rope and hits a drop kick right into Goto’s chest. That would have received a “Holy Shit” chant in America. Nakanishi locks in the
torture rack on Gota as Nagata locks in a Fujiwara arm bar on Shibata.
Goto tosses Nakanishi up for the Shouten Kai, but he botches by not catching
him on the way down. Thus, he locks in a sharpshooter, forcing Nakanishi
to tap @ 11:00. Besides the botched ending, this was better than it had any right to be. It was a
rock-solid tag match with action and memorable moments. ***

IWGP Jr. Heavyweight Title: Kota Ibushi (c) vs. Ryusuke
Taguchi:
Taguchi retired Prince Devitt at Invasion Attack and that earned him a title
shot for the championship. Ibushi hits a moonsault onto Taguchi. He then hits a
Death Valley Driver and follows it up with a moonsault. Ibushi counters a
german suplex by landing on his feet. Ibushi executes a snapping german suxplex
and follows it up with a standing corkscrew. Ibushi misses a 450 splash,
allowing Taguchi to mount a comeback. Ibuishi delivers a powerbomb but only
gets two. He hits Taguchi with a Phoenix, and that ends it @ 14:04, allowing
him to retain the JHT. They came up with some clever spots and did not sacrifice logic or psychology for them. The intensity and urgency to win was what made me emotionally invest into this, though.  *** ¼
Tomohiro Ishii © vs. Tomoaki Honma for the Never Title: