Tonight it’s UWF’s biggest match so far, with Steve Williams and Paul Orndorff finally concluding their feud inside the confides of a Steel Cage. They went to a non-finish in a singles match followed by a non-finish in a Lumberjack match but those will be justified if Herb can deliver this match without snorting it.

Steve Ray vs. The Beast

John Tolos shows up on commentary to give his best “filling a word count” promo about how great Cactus Jack & Bob Orton are as a team. DeGeorge hopes Tolos doesn’t end up becoming a regular thing, echoing the thoughts of dozens. Bruno mocks The Beast’s “fast food and beer” diet as Steve takes him apart with very basic offence. He’s finally getting through to the crowd who are cheering his WWF-touring-Germany levels of effort. Steve leapfrogs Beast then gets a DDT for the win so anti-climatic the commentators were too busy talking about the rest of the show to even call it.

The future Big Guido makes his debut, wearing a traditional black wrestling singlet. Cactus just slaps the shit out of him and follows with a rolling senton off the apron.

It’s so weird seeing this version of Cactus being dominant but he is doing a wonderful job of fucking up the big lad. Brandi and Orton come in to justify a pay cheque before tagging Cactus back in to a big pop for the supposed bad guy heel team. Brandi gets a sidewalk slam but misses a charge and somehow bounces himself off the top rope. This doesn’t end the match but probably should have as it goes on and on with the crowd only cheering Cactus’ cheating. Guido gets a supposedly hot tag but crowd don’t care about him or his horrific Lurch offence so Orton ends it with a Vader Splash to a large pop. Eh, Cactus was good.

Oh wonderful the two ends of the unlistenable spectrum finally collide. They’re live in the ring to unveil the brand new UWF Sportscenter TV Title with the tournament for the belt ending on June 9th at Beach Blast! 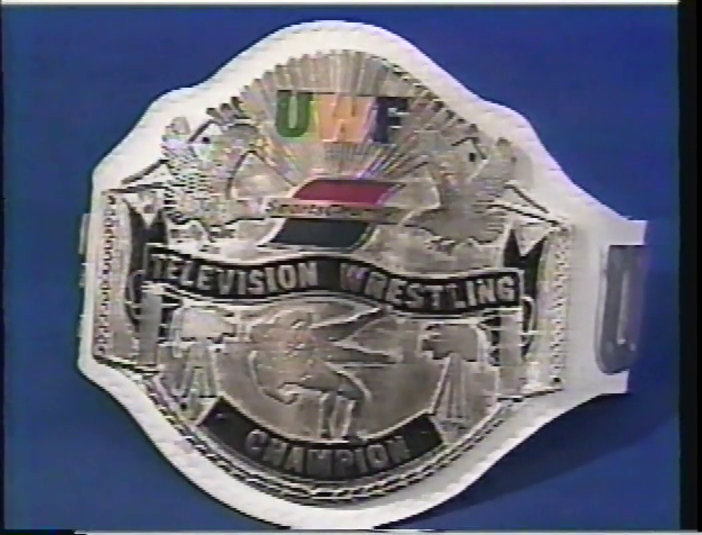 Crowd were respectfully quiet apart from one drunk yelling “LARRRRY” at Bruno.

Dr. Death says he’ll fight Orndorff in a Cage or a phone booth, it doesn’t matter as he’s taking him outta the business tonight. What’s he going to do, get caught with drugs in Japan?

SPECIAL FUCKING DELIVERY JONES makes his UWF debut because if you made your debut in the 70s and have some sort of connection of WWF, Herb will take your call. Can’t wait for Salvatore Bellomo’s debut next week. Almost immediately the crowd get distracted and start cheering for something off-camera and miss Jones’ stunning one minute two second victory after a headbutt, but cheer loudly when they realise he won. OK.

S.D. Jones says he’s down to town in this new office as he’s here to stay! He’s have one more match then leave.

For some ungodly reason, someone asks Lou what diets do they associate with wrestlers and he rants and raves about drinking hot borsch and eating ham so he can show off his gut. If I wanted to see a fat naked guy who never shuts up I’ll listen to Bert Kreischer. 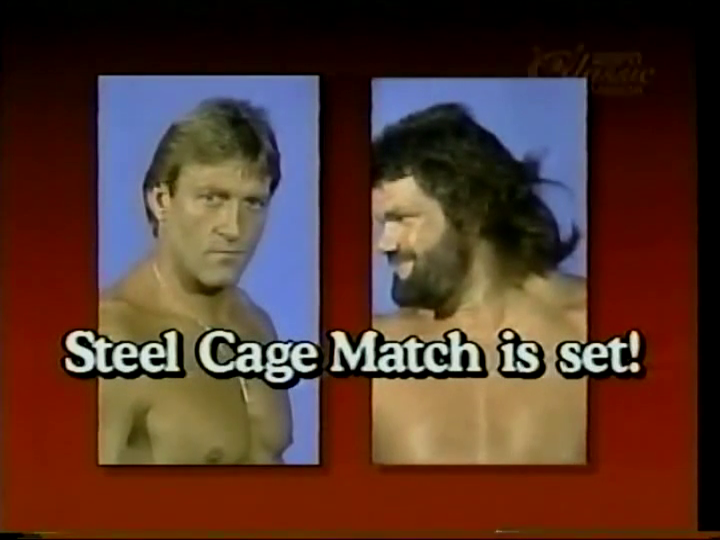 ALRIGHT FUCKERS HERE WE GO. A reminder Orndorff is using U Can’t Touch This as his theme to really give this a big-match feel. Bruno does an admittedly good job of emphasising how dangerous the cage match is and how easy injuries can occur. They grapple on the mat to begin with but Paul takes down Steve and tries an exit quickly with Steve able to grab him down with ease. Steve then tries to escape but Paul turns it into a backdrop. Orndorff tries to lock in a sleeper hold but Death swings him into the cage to get him off. Paul’s bleeding from the forehead causing Bruno to rant about how it’s a good thing the cage walls are so close to the ropes so they can’t bounce off UNLIKE SOME OTHER COMPANIES. Yeah but it’s still WWF style escape rules so jokes on you. Steve nearly escapes but he’s such a dick he willingly re-enters the cage to deliver more punishment. He instantly misses a charge into the wall and blades himself on camera. Both men very nearly exit via the cage door as the crowd get more and more into it. The female screams are impressive whenever Williams starts climbing. Paul crotches Williams and there’s nothing stopping him from escaping the cage door now as…Terry Gordy shows up and smashes the cage door onto Orndorff as he attempts to exit because that’s what he does. Cactus Jack stands outside the cage and blasts all the wrestlers attempting to make a save until Don Muraco disposes of him and saves Paul from a shit-kicking. Once it’s cleared, Bruno wonders who won with Craig speculating it was a double DQ because the referee got knocked down. Bruno gets a quick “WHAT?” before we fade out. And yes, according to Google it was indeed a Double DQ. Crowd are not impressed as we leave the Penta Hotel for another week.

The match was well-worked and the crowd who had to be at least medium-rare after four hours of sweaty wrestling taping were still making noise for it…but it didn’t matter because after all the build up emphasising that this was the final chapter and the cage match is the most dangerous stipulation of them all, it was yet another non-finish to set up Muraco & Orndorff vs. Miracle Violence Connection (which never happened). Again, everyone talks about the drugs and drama because Herb’s booking took away from the likes or Dr. Death and Mr. Wonderful.