Tonight, Cactus Jack teams up with “Wildman” Jack Armstrong as both men rant about how happy they are to have soul mates as crazy as one another. 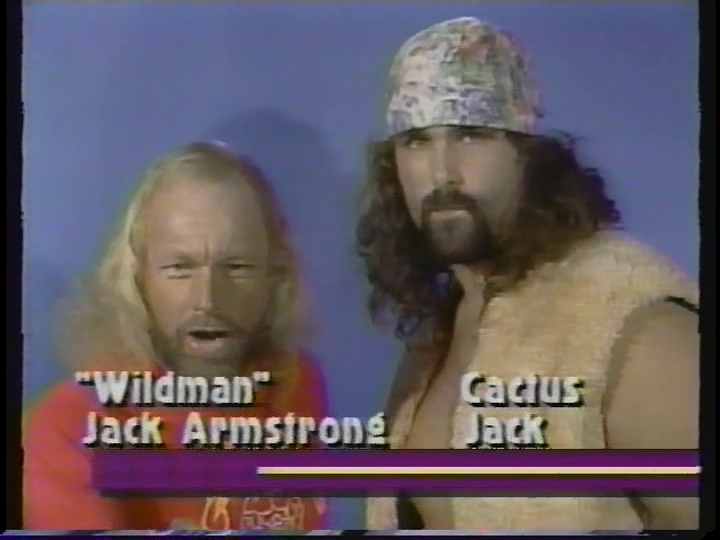 No explanation is given as to who Armstrong is but a quick cagematch search reveals he’s a lifelong jobber who’s been losing since NINETEEN SIXTY THREE and this is in fact his penultimate match before retiring so yeah sure fuck it, put him in the main event.

I’m not saying this match was slow but it took two episodes to finish. Joined in progress and the way they’re moving you’d think they’d been wrestling the entire week. Koloff gives Patera the six punches in the corner, making Herb wonder if they have numbers higher than that in Russia. Koloff charges, Patera ducks to send Nikita head-over-tit to the outside and the bell rings. Turns out Patera has been disqualified for sending Nikita over the top rope but neither Herb or Bruno seem to know why as it’s not a UWF rule. Then everyone moves on quickly and it’s never brought up again as both men were done with the company. I like to think Herb deliberately removed the end of the match from last week’s episode to stick it to the critics. “You think every main event has a non-finish? Joke’s on you, last week’s match didn’t even finish!”

Winner via DQ: Nikita Koloff (Two episodes for a match where Nikita couldn’t even be bothered to do a ten punch in the corner.)

Bob takes his time with Rob, delivering an over-the-shoulder backbreaker before deciding to hold on deliver a follow-up scoop slam. Bob must not have been expecting Robbie to be so light as he dunks him into the ringpost at ringside and then carries him into the ring like a bag of laundry. After looking like a boss, Bob then delivers an absolutely terrible Superplex to end the match, slipping off the ropes and landing on his feet before hitting the move. “I’ve seen him deliver better Superplexes” says Bruno.

Crowd of course assaults Larry with “BRUNO” chants. It’s amazing that one feud followed a wrestler for his entire career. Bulldozer looks like a shaved Roadblock. David Sammartino heads down to the ring to stare at Larry who is stalling (no, really). This allows Bulldozer to get in some offence and the crowd goes BANANA but he sadly misses a charge in the corner and Larry pins him after a scoop slam. Oh. Dozer was more over than David but don’t worry about it, so are ulcers.

B. Brian Blair (w/Honey) vs The Grappler

Crowd sound tired which isn’t a good sign this early into a show. Maybe they’re going “b(zzzzz)” in support of Blair. Oh wait no they’re not as the “SPIVEY” chants kick in. Sadly he’s long gone and won’t be seen until 1994 but he’s still more over as a heel then Blair is a fazzzzze. Tolos shows up to help Blair out with being unlikable and his distraction allows The Grappler to get a small package for two. Blair lands the BUZZ BUZZ elbow off the second rope and finishes with the Scorpion to no reaction. Tolos tries to interfere but Honey threatens him with her shock stick but while that’s happening, Bob Orton decks Blair and has enough of his wifey so he headbutts her.

Crowd goes “ooooh” then moves on to booing Blair as he’s announced as the winner. Blair may be one of the worst faces I’ve ever seen, the crowd refused to cheer for him when he’s getting double teamed and his wife is getting knocked out in front of him.

Bob Orton defends himself against an irate Lou, insisting he didn’t realise “that was a broad” and with “Women’s Lib being what it is these days, who’s complaining anyway?” Tolos says it’s OK because she’s a tarantula and she was in the ring so it was fair game. The best Lou’s Corner yet, helped by them blocking Lou by standing in front of his shot hahaha.

Oh and then we get a rebuttal from Blair and he even starts this ultra-serious grudge match promo with “buzzz buzzz” oh my god. He’s the worst bee since My Girl.

The Viking vs. Stephen DeLeon

Ludvig Borga mouths off as the crowd briefly chants “MELTZER SUCKS” for some reason. Fucking Twitter. Viking tries to choke his opponent then throw him into the turnbuckle but nearly misses the corner of the bastard ring. Some slams and elbows end a dreary squash. I swear he’s getting greener every week.

Andre The Giant appears in another chroma key interview saying he will challenge anyone at any time (providing it’s in the WWF).

A few weeks ago, Cactus cheated to beat Strongbow which annoyed David who attacked Cactus to boos. So Jack Armstrong ran in to make the save and no-one knows who he is but he looks like a grizzly fighting man so eh, sure go for it. This starts off as a brawl with no-one listening to the referee before Jack & Jack regroup in an attempt to get the crowd to boo them but that ain’t happening tonight. Strongbow & Dave work over Armstrong to the noise of CACTUS JACK chants and silence as the commentators have no idea what to say. Wildman isn’t particularly wild but he looks like the guy the Sheriff warns to not cause any trouble in his little town before he immediately causes trouble in his little town. Strongbow slams Armstrong on the concrete and follows that up with a suplex on the floor for good measure. For God’s sake man, he’s older than the man you’re impersonating. Cactus tries to save his best friend he’s never met before and it breaks down again inside the ring. No-one’s really sure what to do as all the crowd wants is Cactus and the other wrestlers aren’t good enough to adapt. Armstrong is bleeding from something and it’s a good ol’ bleeder too. Cactus finally makes the tag into the match officially and instantly lands the Cactus Clothesline to a mighty pop. Cactus tags in Armstrong so they can hit a double team and the crowd BOOS when he tags out. Tremendous. Strongbow tries to get the crowd to cheer for David and they boo him in the second loudest thing on the show. Larry heads down to stare at David because he was so instrumental in his uhhh win earlier on in the show. Strongbow tags in so he can do his REVIN UP THE INJUN no-selling routine to laughter from the crowd. Larry and David yell on the outside of the ring because David is stupid, so Cactus takes the opportunity to use a foreign object to bonk Strongbow for the win.

Winners: Cactus Jack & Jack Armstrong (A complete mess that didn’t do anything it set out do but worth a watch to hear how over Cactus was in 1991.)

David calls out Larry and tells him to put his mouth on the paper. Larry then delivers a beautiful promo about wonderful it’s going to be to retire Bruno’s son. Sadly for David, Larry stalled for too long and signed with WCW before we could get that match that TWA already did earlier this year.

Overall: The direction of the show continues to spin around like a compass in a magnet factory but it’s so fascinating and dumb at the same time that I’m beginning to love it.