I know some people were upset at NXT Season Three being tossed to one side but you really need variety when it comes to your wrestling viewing. Going from old NXT to modern day Raw is like going from Pepsi to Coke, whereas Herb’s UWF is uhhhh some other drink.

It’s the second set of tapings from last week. Show starts with the commentators talking in front of a chroma key of a static shot of the crowd and then…zooming out.

Davey starts by getting punched and bitten. ”Maybe Cactus waits until later to eat lunch” quips Bruno. Aye good one Ledge. Davey shows us the shape he’s in by spitting on the lens and it’s so thick, it obscures his face like Christian in Vince McMahon’s dreams.

Cactus gets two from a back suplex but lifts him up before a possible three, angering Bruno who wants more referees to DQ wrestlers for unnecessary roughness. Cactus slams Davey on the concrete and follows it with THE CACTUS ELBOW to the outside to end it.

Winner: “The Unpredictable” Cactus Jack (It’s a shame more bookers didn’t take their frustrations on writers this way. Shane McMahon dropping elbows on Kott Skeith after Summerslam 2004 would have been nice.)

Spivey rips a B. Brian Blair shirt and throws the remains into the crowd, which doesn’t help stop the cheers for him. Spivey annihilates the immune-from-google jobber until he delivers a gourdbuster (called a ”different version of a suplex” by Bruno) and this happens:

Herb yells ”wow, what humiliation!” while Bruno tears his remaining hair out yelling “yes but you can’t win like that!!” so Spivey gives Cole a Sandpaper Powerbomb to end with a real pin before Bruno charges the ring to start delivering shoot bear-hugs.

Paul Orndorff vs. The Black Knight

The Black Knight gets a graphic in a half-hearted attempt to present him as Not A Jobber. Paul is an armdrag throwing machine early on and TBK takes a breather outside. Inside, he completely fudges a Sunset Flip and instead of doing it again, Orndorff converts it into a hammerlock.

TBK squeezes out of the ring to take another breather and adjust his mask. Mr. Wonderful gives him a backdrop and works over his arm for a while. The crowd’s getting tired so Orndorff takes him out with a dropkick and finishes with a delayed piledriver.

Lou Albano talks (and talks and talks) about how great UWF is while looking at his notes off-screen.

Ludden tries to sneak attack Williams, suggesting he might be more interested in dealing with Dr. Kevorkian. Death gives him an enziguri and avalanches him with gusto. Football tackle and Oklahoma Stampede (on both buckles) ends it.

Col. DeBeers is pissed that terrorist Nelson Mandela is getting more respect than F. W. de Klerk. Fucking hell. He’s going to take his anger out on Billy Jerk Haynes because the Americans wouldn’t let de Klerk do his thing for the good South African people. I knew DeBeers gimmick was “evil South African” but I didn’t realise that meant “evil South African version of The Iron Sheik once he discovered YouTube.”

Like last week, Bruno brags about how lean David is compared to how he used to be (meaning WHEN HE WAS IN WWF and ON STEROIDS and FUCK VINCE). Houdini almost looks like a real wrestler, with his name on his tights and everything. Crowd chants BORING almost immediately so David works over his legs and finishes with the Figure Four Leg Lock after Houdini misses a charge.

Winner: David Sammartino (I was hoping they only filmed two set of tapings at this venue as the crowd is turning on this succession of squashes. But alas, there’s a third taping next week so we’ll see more acceptable-but-unremarkable David matches.)

Lou asks Spivey a weird question about whether or not his height helped him play football. Spivey asks him who cares about football? Spivey explains he attacked Blair because he was running his mouth, so he ran his head into the wall! And he admits Blair is a nice guy and a great athlete but Spivey just enjoys hurting people. Spivey tried but it’s hard to be interviewed by someone who won’t shut up.

Chief Jay Strongbow Jr. is here to spread WAR DANCE FEVER. Another reason to keep your masks on. 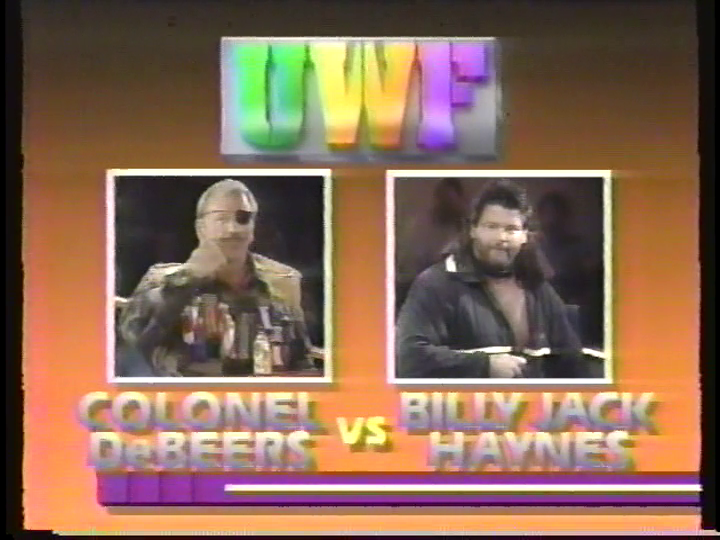 B. Brian Blair vs. Spitball Patterson

Herb tries a bit of banter with Bruno, asking him if he knows how Spitball got his name before yelling ”because he spits a lot!” to no reaction. Herb should have gone into detail about the art of the Angry Dragon just to see Bruno’s face. Match barely starts before Spivey shows up at ringside to glare. Spivey trips Blair up and Bruno gets pissed. ”The ref knows Paul isn’t a clumsy clutz!” Crowd reacts to these heel tactics by loudly chanting for Spivey. And why wouldn’t they? Blair was so vanilla they could have made ice cream out of him. Blair gets tripped again but carries on wrestling Spitball like a bum rather than taking Spivey out and he eventually ends with a Sharpshooter (Or a “Boston Crab” if you’re Herb).

Winner: B. Brian Blair (Match was all angle. And that angle was “Blair sucks.”)

Spivey attacks after the bell and delivers another Sandpaper Powerbomb to Blair as the crowd goes nuts. He’s the most beloved cheater since Michael Schumacher.

The Colonel comes out to Welcome To The Jungle, probably because Herb thought they have those in South Africa. DeBeers grabs the mic and informs everyone he’s not wrestling because “the referee is A BLACK MAN”. Woooof. Crowd are suddenly awake again, asking the person next to him “did he say that?” The ring announcer declares a change of officials to appease DeBeers as Bruno goes crazy. “What power does the ring announcer have to do that??” The Whiter, Fatter referee takes over as both commentators exclaim how wrong this is but also wonder who is in charge here. Good question Herb. Billy Jack demands the original referee officiate this match so DeBeers treats him like the Italian Forces in 1940 and attacks him from behind. This type of angle shows where my head is at with wrestling, as it’s insane seeing this type of angle in 1990…but on the other hand it’s getting the most heat of anything on the show. BJ recovers so DeBeers offers his hand but Haynes isn’t taking it. BJ then sucks all the can-you-believe-that-motherfucker-said-that heat from the room with an extended chinlock. DeBeers brings it back with some magnificent knee lift sells.

They brawl on the outside as both men are acting like they’ve been going at it for thirty minutes mark but it’s barely been five. DeBeers is all eye-rakes and axe handles like Hogan in 1998. DeBeers busts out a knee drop attempt off the top rope but BJ gets his knees up on a knee-drop attempt and chops DeBeers so hard his eye-patch flies off. Zack Gowen dropkick from Billy sets up the dreaded Full Nelson but DeBeers runs outside to avoid taking such a vicious move. Billy Jack follows and they slowly brawl to a double count out, like last week’s main event.

Winner: No-One (Match had crazy heat for two minutes but sadly it lasted nine. No wonder DeBeers was all about shock value, he was drowning on dry land after those knee lift bumps.)

Overall: Some great squashes, some bad squashes, some horrid production and some un-PC moments make up for the fact there’s only one angle and no-one’s reacting to it the way they should. What a breath of fresh air this crap is compared to the crap of 2021.