Striker introduces The (Not Ready To Be) Not Ready For Prime Time Players who are sat at ringside, looking for things to shove into their pockets on the way out.

Action starts off far faster than you’d think considering it’s the only match we’ve got tonight (unless Rhodes & MVP are sitting on standby again). Cole talks about McGillicutty having the best record on the show but they kind of gave up on the wins and losses during this show. Cole rants about Kaval being an internet darling, using the same script he used for Bryan last season. Kaval takes a suplex off the apron to send us to break. Riley gets more offence with Miz high-fiving Cole at his success. The crowd doesn’t know who to get behind until Ki lands the Dan Maff Killer kick. (It’s not been called that in a millennium but figured it’s a good time to bring it back.) Kaval sends Riley off the top rope with a Handspring High Kick to get a “That Was Awesome” chant going. Dragon Sleeper gets synched in but McGillicutty collapses into the ropes to technically break it. Perfectplex looks to end it but Riley breaks up the pin, gets pushed into the announce table so Kaval lands the Lyger Kick on McGillicutty to set up Warrior’s Way, but Riley recovers to push him to the outside and steal the pin on Michael.

This Season’s Losers are asked about who should win with the highlight being Lucky Cannon getting laughed at by Cole & Matthews because one day NXT woke up and realised he was crap and no-one disagreed. 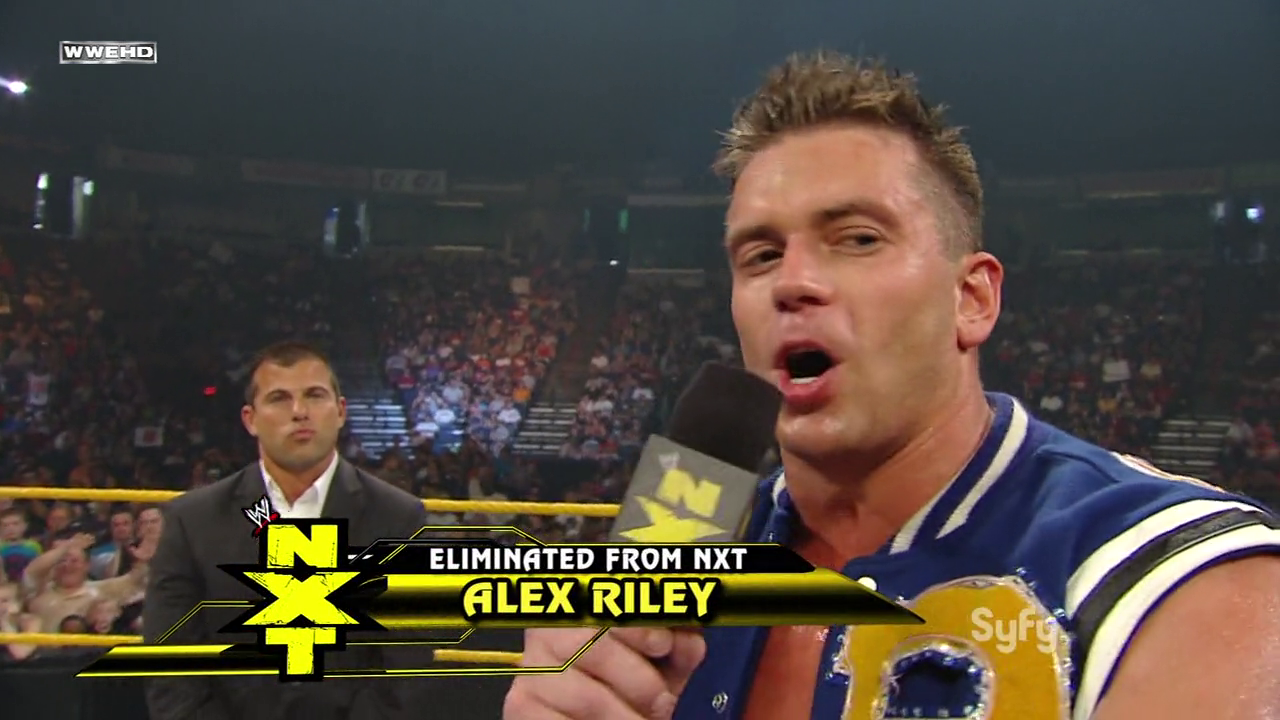 Alex Riley is the first one eliminated, which was a surprise at the time but with hindsight it’s like they realised “woah woah this guy doesn’t need this terrible show to get over, give the win to someone who needs it.”

Riley immediately grabs the mic from Striker and thanks him for talking over him for most of the show which gets a HUGE pop from Matthews & Cole. His speech afterwards mocks Kaval for wrestling in bars and apologises for not having a famous Dad. He’s so good, half the crowd are cheering Riley afterwards and absolutely nothing could stop this man. Not even the biggest wrestler of this era.

We’ve got time to kill before the final elimination so let’s have the two remaining lads talk about why they should be OH GOD IT’S TIME oh no no sorry not yet. This is merely The Prelude Of McGillicutty:

“Hey Lay Cool…did you seriously submit your ninja baby into the competition? I don’t know whether to spank you or breast-feed you.”

And that’s just the start of a truly horrible promo from Maggle Knacker-Fringe with the commentators barely able to hold themselves together. Cole: “And Riley got eliminated???” Kaval gets cheered by virtue of not being McGillicutty and even Cole compliments him.

Cole & Matthews hype up Season Three and you know how they’ve gone with midcarders for the Pros these past few seasons? Yeah well, for context the women’s roster is so weak right now they’re merging the Divas & Women’s title at the next PPV so the Pros are quite amazing for their lack of experience/success/not woman: 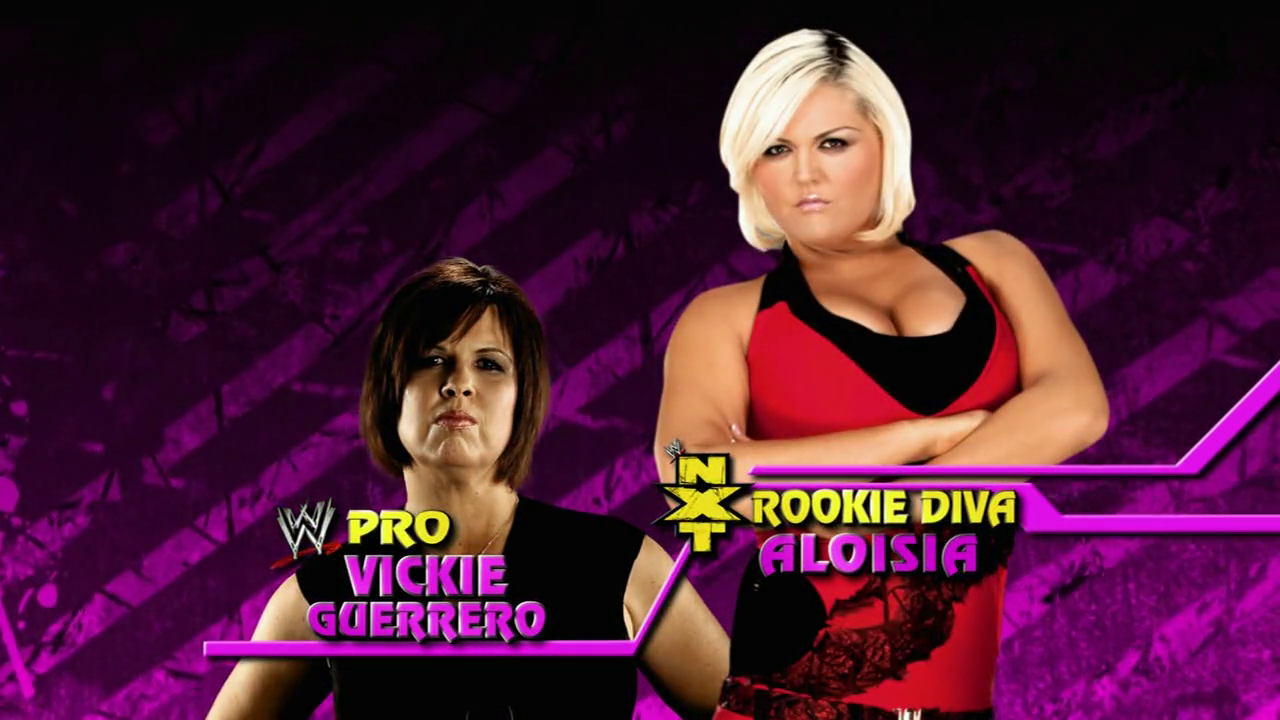 Aloisia, the giant Amazonian woman from NXT this week, has already been dropped from the show. She showed up in Tampa about three weeks ago and was immediately signed, and I think what happened was they rushed her to TV and quickly realized she’s not even close to ready. She worked the Gathering of the Juggalos show several weeks back, the show where Tila Tequila got waffled by an errant bottle, and we were told that she was absolutely horrible but did show potential. I have no idea what you do with a giant woman in WWE. It was one thing with Andre the Giant where he could go to a territory, do some matches as an attraction, and then get the hell out and go elsewhere. WWE can’t even figure out how to book the Big Show, and the male roster is significantly larger than the female roster, not to mention most of the guys are decent-sized dudes and the women in WWE are all around 5’2,” and this woman is a legit 6’9.” I have no idea how you book her except to just kill everyone quickly, and then what? You can’t do believable matches — at all — and it’s not even like she’s some great worker a la Awesome Kong where you can do a Kong/Gail feud. It’s all pretty baffling. Vickie will be “replacing her” with another girl.

And the winner of NXT Season Two is Kaval. 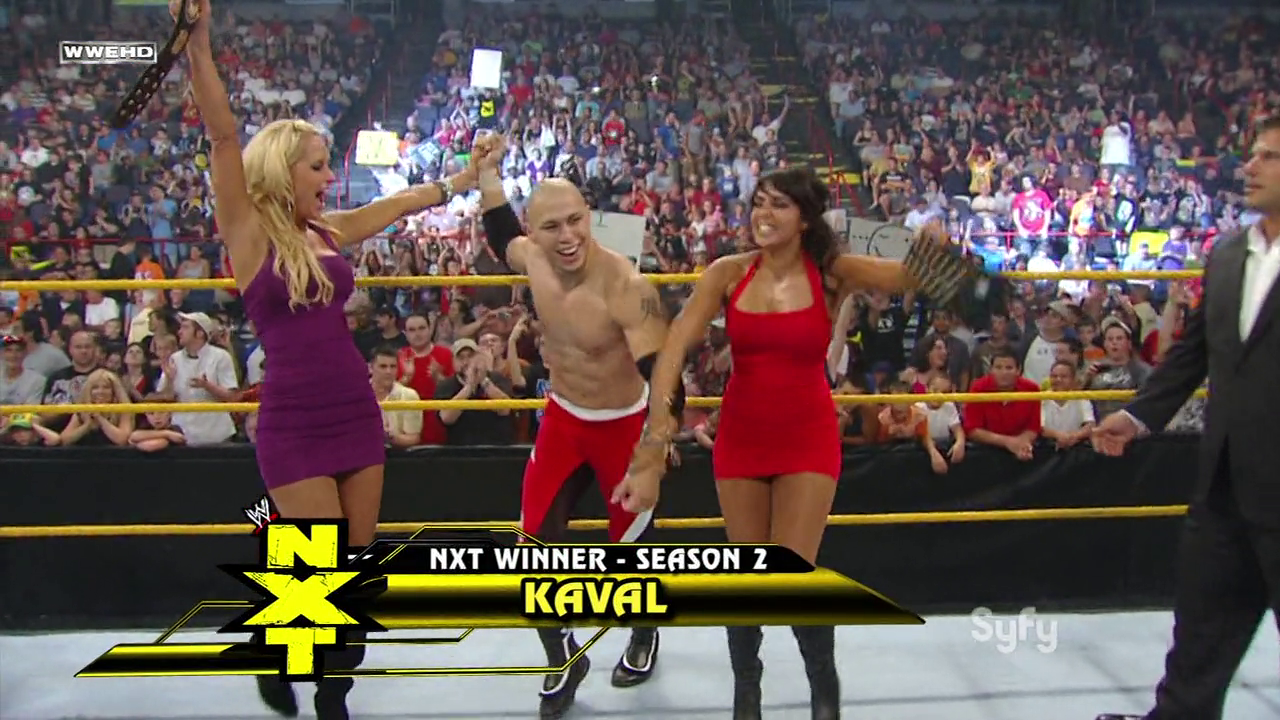 Once they stopped the losing streak gimmick and listened to the crowd, he was the easy non-Riley winner.

I don’t know what to say.

You’re gonna go to a pay per view? And have a title shot? You have got to be kidding me. That’s gonna suck, I’ll tell you that much

Doesn’t matter what you think, you are nowhere near the level of Michael McGillicutty. You understand me?

Ever since I started NXT, I had one goal: and that is to become a WWE World Heavyweight Champion. (Cole: Well that’s been put on hold.)

And, unfortunately, I got eliminated today. And I lost my guaranteed shot at a title.

But that is not gonna stop me from becoming a future World Heavyweight Champion.

See, I am the future of this company.

I am gonna be a big time player in this machine called WWE.

I am the next big thing.

I am the next generation.

And starting this moment.

From this moment on.

This will be the moment.

(Cole: Can we hear from the winner now please?) 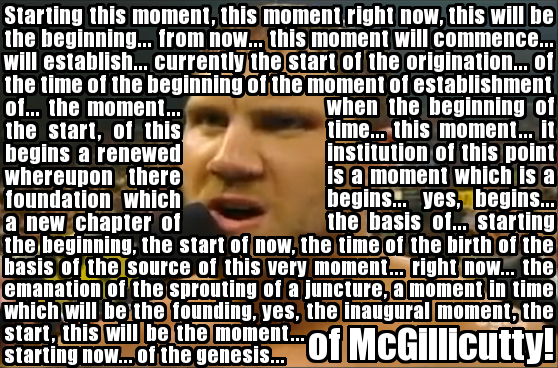 As Striker congratulates Kaval, This Season’s Losers jump the guard-rail and bum-rush Kaval with the Pros running out to even the odds. I guess this was supposed to be a big, exciting climax but the Losers look they have no idea what they’re supposed to be doing. Titus isn’t sure if he’s supposed to sell MVP’s Yakuza Kick in the corner until MVP launches him out of the ring, Alex Riley decides to turn on Percy Watson for some reason and the referees start yelling “HIT KAVAL WITH YOUR FINISHERS YOU FUCKING IDIOTS” to regain some control.

The show ends with Kaval taking a ton of finishers from The New Nexus (No, Not That One) and we get a final video package summarising the last few weeks just so they can show Titus falling over again.

Overall: The last five minutes were some of the worst TV of the year but if it wasn’t for that then there’d be nothing to talk about so thanks for being memorably awful lads.

So ends Season Two. Season One at least has the benefit of being a fascinating look at how counter-productive WWE used to be with talent ten years ago, but Season Two managed to somehow be both a car wreck and dull at the same time. The easy highlight of the season was when the commentators gave up at being professionals and using any chance they could to laugh at Striker and/or Lucky Cannon.

What happened to NXT Season Two?

Kaval: Despite his in-ring ability and better-than-expected promos, Kaval would have enough after losing to Dolph Ziggler at Survivor Series and then getting beaten by TYLER REKS to lose a shot at being involved in Bragging Rights and would request his release in December. Considering how deeply invested Kaval is into his character and wins/losses, I’m amazed he lasted that long in a company that clearly decided to push TYLER REKS with the sole intent of annoying him.

Alex Riley: Had a great run with Miz and then a SWEET theme song without him and then…ehhh fuck knows.

Titus O’Neil: Spent the rest of his career falling over and doing charity work and will never stop being in my Boy Stable.

Michael McGillicutty: Joined The Nexus, The New Nexus, Paul Heyman’s Guys, Miztourage, Rybaxel, The Social Outcasts, The B-Team and The Royal Rumble 2015 before being let go in 2020.

Percy Watson: Would accomplish nothing despite his crazy energy. Would return years later to be the unnecessary third guy in the booth before leaving again.

Eli Cottonwood: Would be in the original version of The Wyatt Family and then out of wrestling soon afterwards.

Husky Harris: Would be in the original version of The Wyatt Family and do slightly better afterwards.

Lucky Cannon: Got released in 2011 and was last heard being arrested for impersonating a police officer. 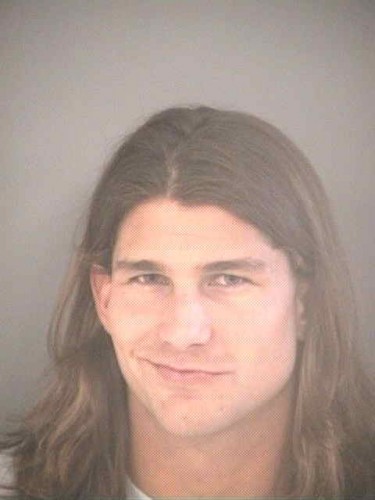 Yeah that’s how I feel too.

I’m sorry for the complete lack of a schedule I kept for this show. As soon as I saw “NXT Season Two” I suddenly remembered something more important to do. I wasn’t going to bother with Season Three but seeing as someone said “oh go on” I’ve changed my mind because I’ve never seen it and figured we might as well suffer together.

So see you next week! I’d post the latest Botchamania but it’d probably get the Blog taken down.