We’re in Atlanta, GA (baddest place in the whole US of A) recovering from Titus O’Neil’s elimination last week.
Ryder (Titus’ Pro) isn’t impressed with his Rookie getting voted off. Morrison agrees, he thinks Miz should have been voted off, mwah mwah mwah oh god was smiling babyface Morrison terrible.

Striker asks Husky Harris is he’s worried after being one position away from being voted off. Husky replies with “I’ll carry on doing what I want and there’s nothing the WWE Universe can do about it”, Cole buries him by replying “they can do something about it…they can vote you off!”

Striker says tonight we test everyone’s charisma. Might as well skip to the end and disqualify everyone. It’s the Promo Challenge but unlike last Season’s schadenfreude, the Rookies get ten seconds to think of something to say and then thirty seconds to talk about it.

Percy Watson gets “glasses”. He talks about needing vision to see what he wants in life.

Kaval gets “chicken” as Cole guffaws. He says he isn’t one.

Eli Cottonwood gets “moustache.” He says he doesn’t have one and then says he has the best one on NXT. His Pro is shown laughing.

Michael McGillicutty gets “breath.” He says that’s the thing he’ll take from you by the end of NXT and that gets a decent response.

Husky Harris gets “doorknob.” He gives up and says he’s not going to do it.

Lucky Cannon gets “deodorant.” He’s like a smelly guy who needs deodorant and WWE is the deodorant and the two can’t exist without the other so who wants to smell with *time expires*

Alex Riley gets “pigeon.” He’s the rooster in this hen-house. Something something pigeon, evil laugh.

Percy Watson wins and gets to host his own talk show next week. Like last Season, this was more rib than segment.

Oh and in important news, WWE launches it’s YouTube Channel. It took until July 2010 for them to get one? I know WWE are behind on cultural trends but wow. 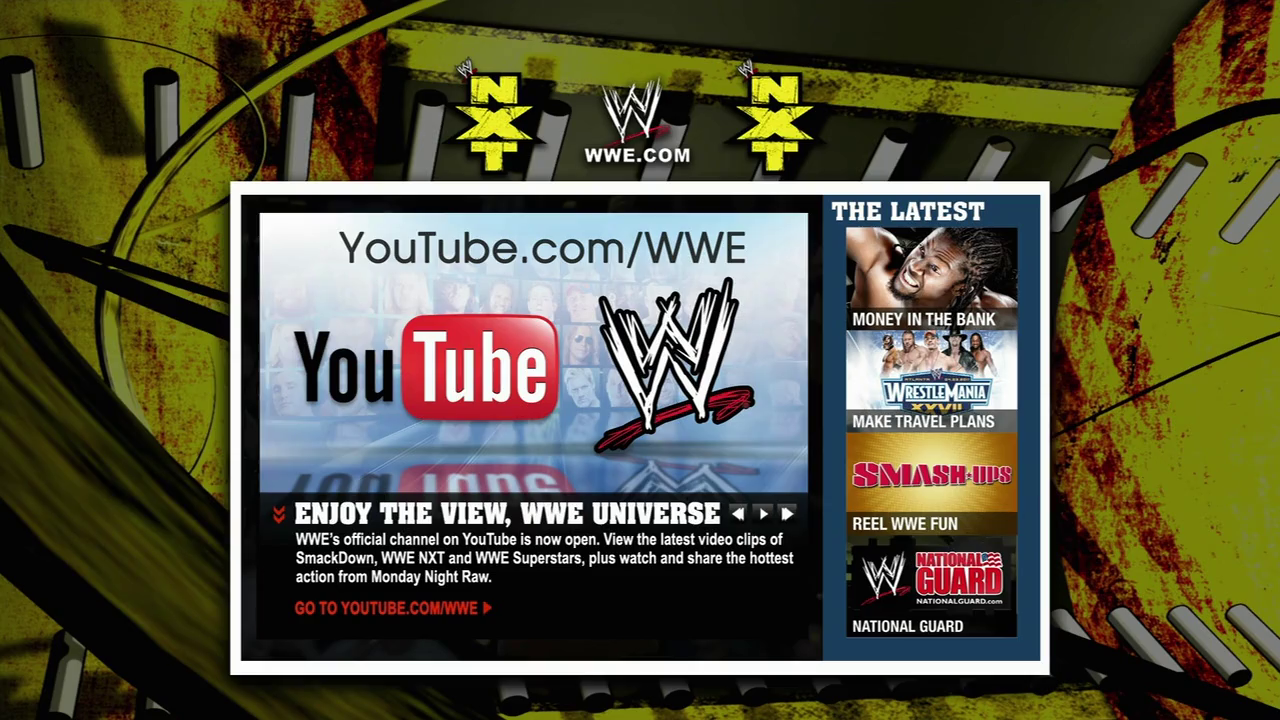 Speaking of behind the times, this week’s WON says the Rookies aren’t allowed to sign autographs and they have to wear the NXT badges anytime they’re in public.

MVP & Kofi Kingston are on the apron to coach and to generate more heat than last week’s library-silent episode. Michael mauls his opponent and prevents him from getting anything in, which is for the best. Percy comes back with a big dropkick but McGillicutty lands a Sunset Flip to…win? Oh. I know they’re giving him a “outta nowhere” gimmick but those tend to work after a cool move, not an AEW set-up special.

We get clips from last week’s Keg Challenge so we can show this one more time:

Then they air a build-up package like they’ve aired for the other NXT Rookies but this time it’s the Pros insulting him as they continue to salt the earth for a wrestler who *checks* is still with WWE to this day.

The Miz vs. Kaval

Crowd chants for “Low Ki” as Miz works him over with his default CAW offence. Kaval counters a backdrop into a crossbody to pop the crowd but sadly for them there’s a commercial break so when we come back, Miz has him stuck in rest-hold land. Miz rolls out and double stomps Miz right in the chest.

Kaval lands the Tidal Crush but Miz cuts off Warrior’s Way so he lands chest-first on the top rope to set up a Skull Crushing Finale and pin.

Winner: The Miz (Another impressive display for Kaval, another unrealistic loss for Kaval. He’d already lost to a promo about chicken so he’s 0-2 tonight.)

Alex Riley suffered a head injury at the FCW tapings during a match with Kaval when he went hard into the guardrail and the back of his head was busted open. They stopped the match and had the trainers come out to tend to him and then take him backstage. Steve Keirn then came out and apologized to all the fans and said he’d book a rematch soon. Kaval stood there for a while not knowing what to do and then just walked to the back. It’s not a serious injury but as a precaution they were planning over the weekend to keep him out of the ring for this Tuesday’s NXT.

RAW REBOUND: Cena got attacked by Nexus and Barrett insists it’s not personal and the Anon Raw GM has ordered them to sort things out tonight. So Wade the leader of these rebels who doesn’t care about the rules is listening to the Anon Raw GM? I can’t believe WWE were gift-wrapped this amazing moment and proceeded to throw dirt on it every week. Cena refuses a handshake from Barrett so Nexus attack him. Half the locker room come out to support him so the Nexus run off and Cena applies the STF to Darren Young…and the Anon Raw GM says because of Cena’s actions he’ll face all of Nexus in a 7-on-1 match next week. I’ve seen better writing on public toilet walls.

Husky and Lucky go at it until Mark tags in, Husky doesn’t want any of that so he tags in Cody. Smiling Mark takes too long grinning like a mad man and he misses a leg drop on Cody. Husky and Cody take advantage of the mistake and double team him for all of thirty seconds because the Raw Rebound ignored it’s time cue and went over. A mini-brawl between the four men starts and ends instantly with a Cross Rhodes onto Lucky.

Winners: Cody Rhodes & Husky Harris (They call it NXT because whenever people see matches like this they yell “NEXT”).

Overall: Unless you really, really love the bizarre way WWE treats people on TV then give this a miss.

Also while it’s relevant in this NXT journey, here’s Bryan’s official statement about being released from WWE:

“Since this statement was released I’ve been bombarded with messages asking me if it’s real, and by now I’m sure that most people know that it is. WWE is very serious about adhering to their PG guidelines, and apparently my actions during the NXT attack on John Cena, namely choking announcer Justin Roberts with his tie and spitting in Cena’s face, crossed the boundaries of what is considered ‘PG.’ Perhaps the choking was too violent or perhaps the spit was too demeaning. I apologized for both immediately following the incident; but I would be a hypocrite if I apologized for putting everything I have into the attack. I would much rather have gone too far than to come up too short. As with anyone who gets fired from their job, especially when they feel it’s unjust, I am angry. Very angry. But I can’t fault WWE for how they handled my release. My contract contained a 90-day no-compete clause in the event I was let go, yet the WWE has graciously allowed me start wrestling again on any show that’s not taped for television or pay per view. So with the negatives there also come positives. Before I got signed by WWE last October, I worked hard to bring new fans to independent wrestling. But with most of us having little national exposure the only thing we could do was wrestle our hearts out and hope for word of mouth. Now that I’ve appeared on WWE television in front of millions of new fans, things are different. My goal is to garner as much interest in independent wrestling over the next 90 days as I possibly can. I hope that some of the people who enjoyed watching me wrestle on TV will give independent companies such as Evolve, Dragon Gate USA and Ring of Honor a chance. I think most of you would enjoy the intimacy between the fans and the wrestlers and the intensity of the action; if you ask the fans who went to the Chikara or AIW shows I was on this weekend, I’m sure 99 percent of them had a great time. So if you’ve never been to an independent show, go ahead and dip your toes in — you might find that the water is pretty nice. As far as what happens after 90 days, nobody knows. I’ve ‘heard’ that TNA is interested. There are petitions going around to get me back into WWE and the last several weeks there have been fans chanting my names at their shows. People have even brought signs showing their support. And though most of the signs get taken away and though WWE may not be listening to your chants or petitions, I truly appreciate all the support over the last several weeks. It is both overwhelming and heartwarming. But regardless of what offers come in, I am in no rush to make any rash decisions. I enjoy my freedom as much as I enjoyed the benefits offered by being in WWE. My future, as usual, is uncertain. But I am enjoying my return to the independents. I’m hoping to see some of you there.”

His first post-WWE indie match was for Chikara vs. Eddie Kingston, so enjoy and appreciate the wonderful post-match talking.

I’ve been Maffew, go away.