We’re in Wilkes-Barre, Pennsylvania and it’s time for the first Poll and elimination.

Ashley Valence introduces the cast. She’s new and made her debut the previous episode and still sounds awkward so Josh Mathews asks “can we eliminate Ashley?” as she’s explaining what a vote is to the audience. I mean if Josh Mathews is mocking you it’s not too late to switch careers.

McGillicutty drops the keg and gets DQ’d, claiming it was lighter during practice. Yeah because Michael Hayes was there. Cannon gets 12.7, Watson gets 13.0, Cottonwood gets 13.3, Kaval declines because the keg weighs as much as him so forget it.

But who cares about any of that, we all know this episode because of one guy falling over and it’s Titus.

No no, the other time.

Titus tries looking for a hole to fall into (and hopefully not miss) while the others try not to crack up. In the interest of fairness, here’s Riley falling over too.

Lucky Cannon wins and gets immunity (from being remembered by anybody).

MVP can’t knock Harris down for a few minutes while the completely silent crowd can barely be bothered to chant for Daniel Bryan. After a commercial break, Harris is dominating MVP but the silence is killing me. Husky lands a running splash for two and carries on slamming and rest-holding while MVP holds his hand the whole time. Crowd ignores Percy Watson clapping the mat for support and doesn’t even pop for his big Back Senton. MVP lands the Ballin’ Elbow and a Flatliner puts this match away forever.

Winner: MVP (The early seasons of NXT were full of Baby’s First Wrestling Match in front of crowd’s that were waiting for Smackdown to start. This was one of them.)

Lucky gets dominated by the baddies and the crowd couldn’t have been quieter if they were European wrestlers on twitter during Speaking Out. Kaval tags in to kick Riley right in the fucking head to get the crowd warmed up. Everyone comes in for a brawl allowing Kaval to double stomp Riley for the win.

Raw Rebound: Ricky Steamboat is honoured by some legends, which brings out Nexus (using that name for the first time) who explain they’re going to be in deep trouble if they attack any WWE Superstar…but Steamboat is a Legend so that’s OK according to the WWE website. Huh.

Sadly this angle was swept under the carpet and never referred to again a week later because Steamboat would be hospitalised legitimately:

Ricky Steamboat, 57, was still hospitalized at press time after suffering what was believed to be a burst capillary in his brain last week. Steamboat was banged up really bad in the NXT beatdown Monday and was complaining of headaches and neck pain. On Wednesday it was really bad and he told his family he needed to go the emergency room. The initial belief was that he’d suffered a brain aneurism, but later the doctors ruled that out. A capillary burst itself isn’t terribly dangerous but this one left him with bleeding on the brain, and that’s really bad news. WWE and the doctors are both saying that the issue had nothing to do with Monday’s beating. Perhaps it didn’t, and the doctors would know better than me, but I’m not sure how you could rule it out so quickly in the sense that he took a beating on Monday, it resulted in him having a terrible headache, and then two days later he was in the hospital with an issue that is often caused by blunt force trauma. I guess their belief is that if the capillary burst had been the result of what happened on Raw he’d have been in the hospital Tuesday night. Maybe he would have. But Steamboat also has that wrestler mentality where 99 times out of 100 they will try to gut through things and presume their fine, and it takes a lot for them to go to the hospital. My uncle died of a brain aneurism and they found a huge bottle of aspirin in his truck, so apparently something had happened and instead of going to the doctor for it he was just taking tons of aspirin for the headaches, which actually probably thinned his blood and made things worse. Again, maybe they’re right, but there certainly is evidence pointing to Raw and I don’t know how you rule it out so quickly. I will say that whether the NXT deal was responsible or not, the idea of big strong green guys beating the shit out of guys in their late 50s (Steamboat) and mid-60s (Vince) is a terrible, terrible idea. WWE was concerned enough that they edited the footage off the replays over the course of last week. The latest we heard is that he’d be in the hospital a few more days and then likely be released, so he really dodged a bullet here. We’re told Steamboat will have a drink here and there but he lives overall a very clean life, so it wasn’t any sort of issue related to that. They were hopeful at press time that he would make a full recovery and be able to return to his agent duties at some point. 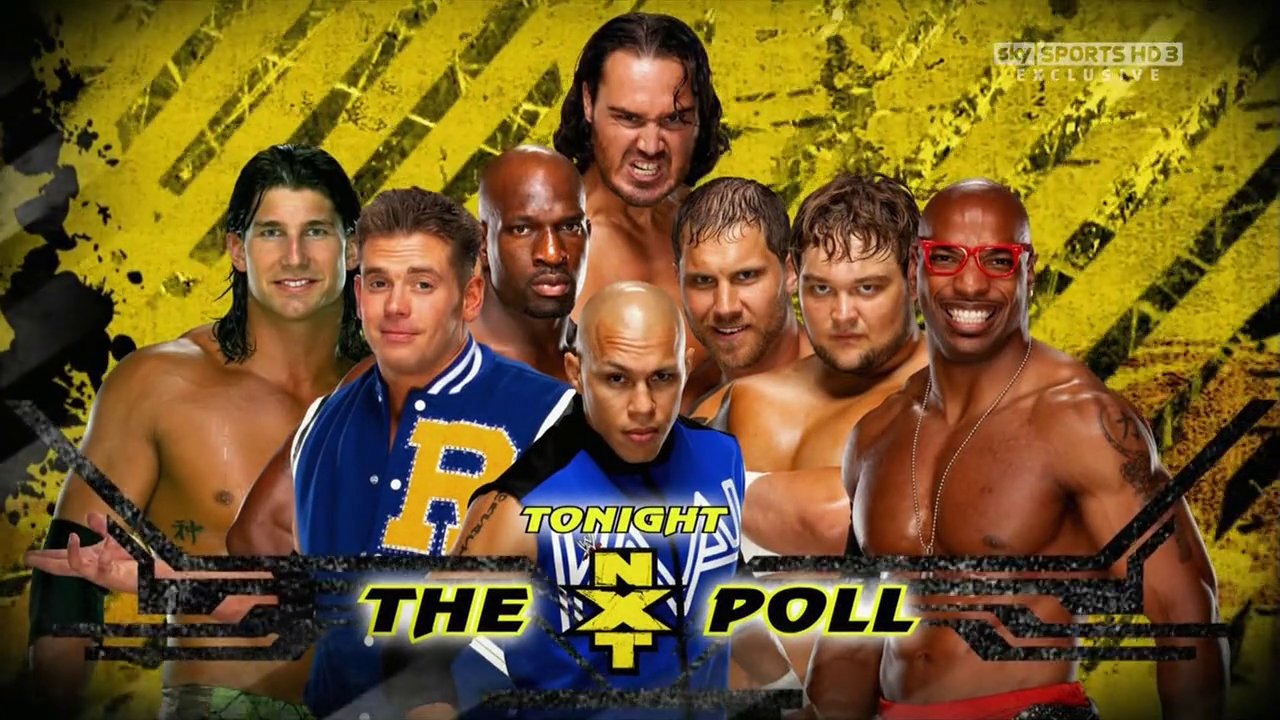 Titus is eliminated. Why would you eliminate the best part of the show? 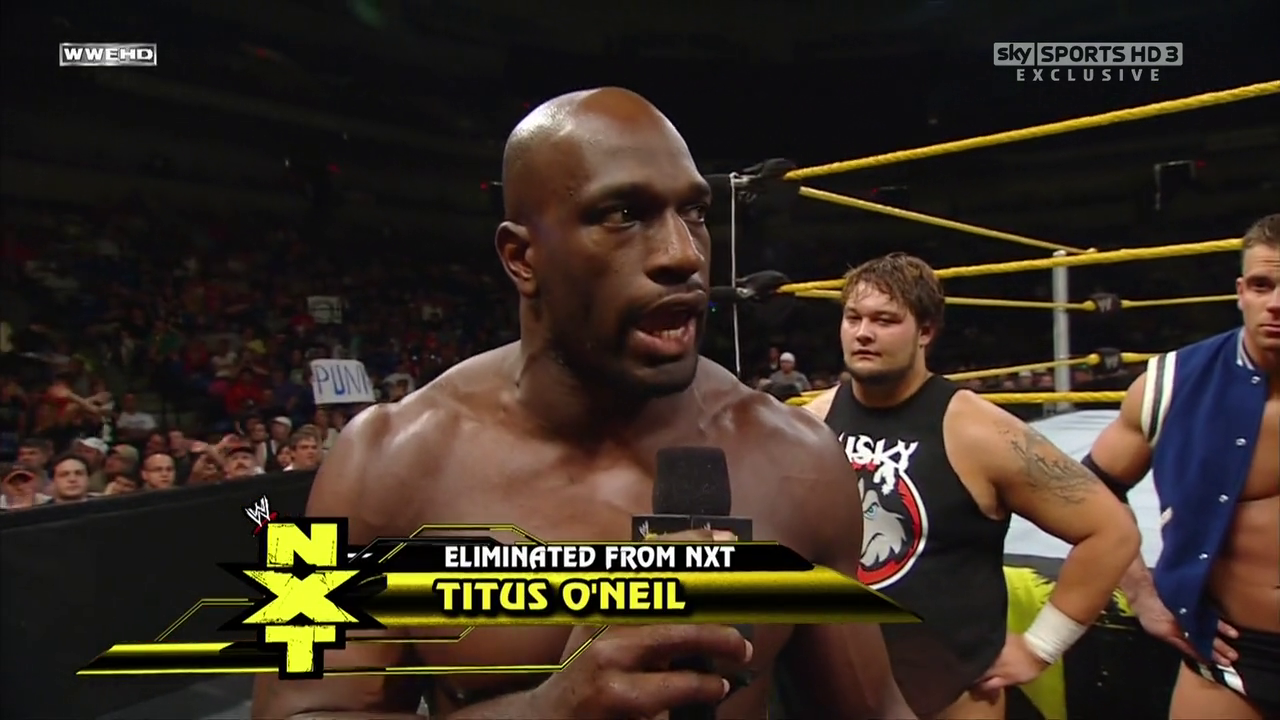 He gives a lovely speech about life being a game and whatever game you’re playing you need to make sure YOU MAKE IT A WIN and crowd applauds and sound like they immediately regret their decision. Hey you fuckers wanted Eli Cottonwood, you’re going to get Eli Cottonwood.

Overall: No wonder they used to show the clip of Titus over and over, it made you think there was anything good on this show. Skip this one unless you absolutely have to see what The Fiend looked like before he could wrestle.