The Rookies show up on the ramp in order of rank like the Von Trapps:

And as Gennel revealed in last week’s comment section, The Pro Poll was a shoot which is why Bryan’s #1 despite having zero wins. I have no clue why they’d do that but 2010 was full of “why is this happening?” moments. 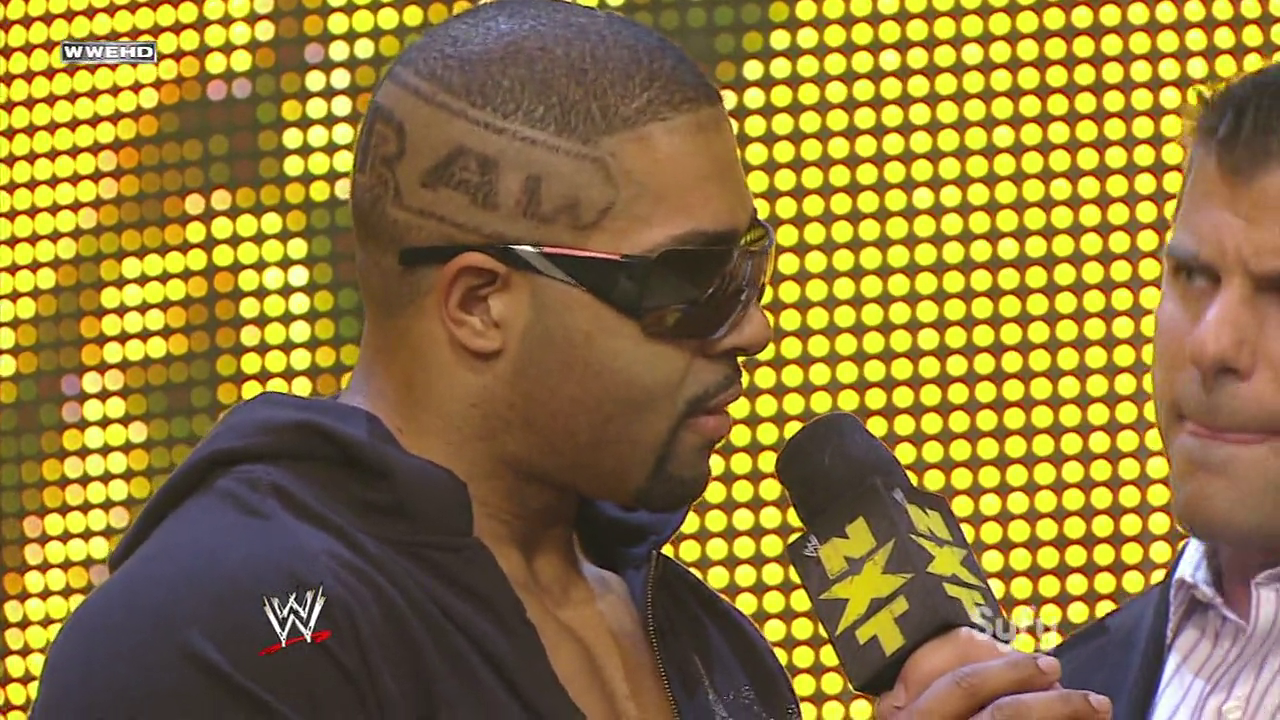 Speaking of which, Otunga hosted Monday Night Raw this week and had the chance to win the Unified Tag Titles with John Cena…but walked away. Otunga explains he didn’t need to share his spotlight with Cena, plus why would he anger one of the The Pros (The Miz) when he’s got the power to vote him off? Holy shit, logic.

Daniel Bryan is asked if he deserves to be #1 and he replies “Does Miz deserve to be a Pro? Does Otunga deserve to be hosting Raw? Does Michael Cole deserve to replace Jim Ross?” to deafening support from the crowd as Cole mocks him whenever there’s a bit of silence. Michael Tarver says something but no-one notices. 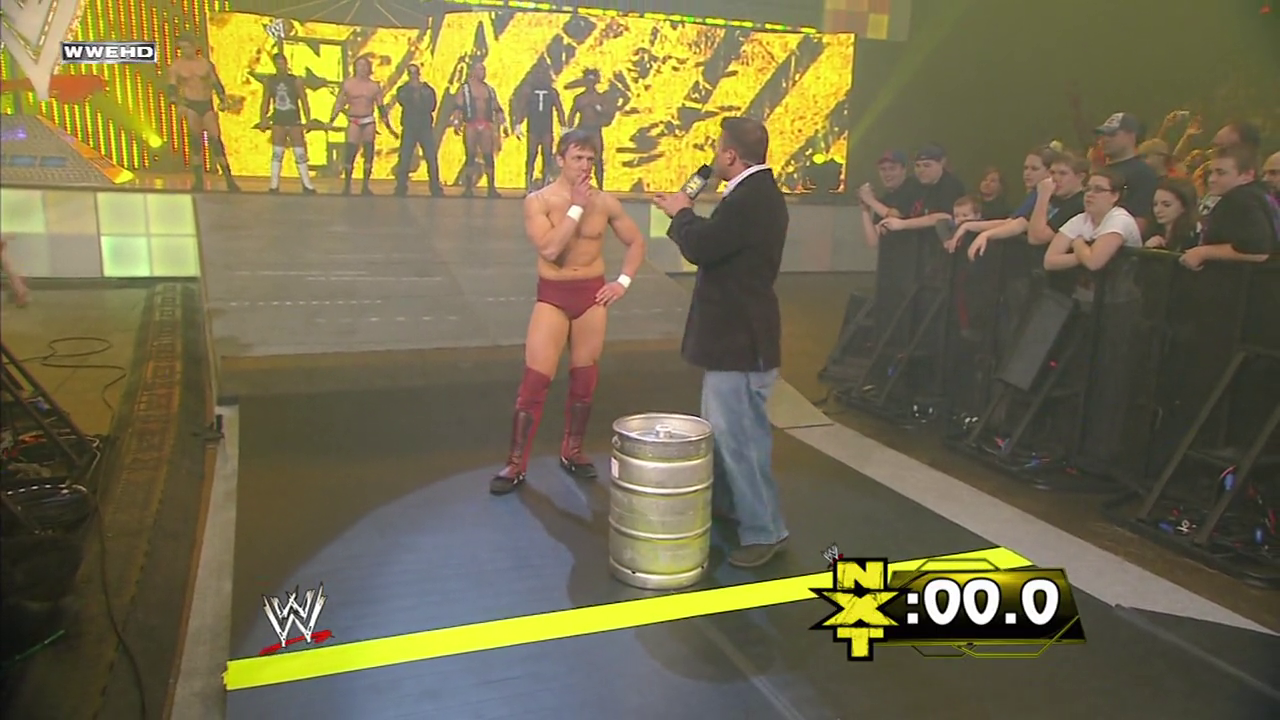 Now we move onto the Keg Challenge (Striker says something about Mathews knowing all about that, which sounds like a rib I’m unfamiliar with) where you have to lift the keg and carry it around the ring and back as quickly as possible. I’m hyped.

Bryan goes first and gets 24.9, taking the time to stick his tongue out at Cole while also holding the keg vertically. Bryan sells like it’s genuinely heavy and knowing this show I’m sure it was legit.

Otunga gets 14.1 with his shades on but Skip decides to lug it over his shoulder like that log from Commando and narrowly achieves 12.4. Then we get the highlight of Tarver’s career:

Darren Young manages 13.6 but manages to pop it after dropping so there’s that. This means Slater wins the coveted Keg Challenge with 12.0 and gets to main event tonight against…Kane because FUCK THE ROOKIES.

RAW REBOUND: David Otunga hosts Raw! And all the things he just talked about happened! Then Batista attacks Cena post-match and asks for the spotlight to request his Last Man Standing rematch at Extreme Rules.

Striker talks to Skip Sheffield who thinks the Keg Challenge was rigged and also he’s lost his Texas accent after seven weeks and sounds just like Ryback.

It’s #1 vs. #8 and Bryan starts off strong by sending Young outside and following with the flying knee off the apron. Cole isn’t surprised the internet fans love the internet darling as Bryan briefly locks in the Cattle Mutilation before turning it into a pin-fall attempt.

I don’t remember Bryan using that much in WWE so that was nice. The match is going so fast you can barely pay attention to Cole’s constant berating of Bryan reading the Vegan Cookbook at 6 a.m. every day. Young can’t keep up with Bryan during the Malenko/Guerrero pin-fall sequence but after a big slap, double legs Bryan and pins him out of nowhere.

Winner: Darren Young (4-2) (Bryan wrestling as fast as he could with Young doing his best to keep up. Crowd only cared about Bryan though.)

Tarver talks about being an “unleashed pitbull” but his offence and physique are so awkward he’s more like an unfed chow chow. Gabriel takes some mandatory offence from him before nailing a springboard clothesline. After an awkward spot no-one reacts to with Gabriel coming off the top to bonk Tarver’s head on the top rope, Gabriel saves the match by ending it with the 450 Splash.

Winner: Justin Gabriel (4-2) (Tarver looks like he’d struggle with the question “so why should we hire you?”)

Otunga says he’s voted #5 because the other Pros are threatened of him. Ha! By the way, the Rookies are using their Pros’ themes but none of them are here this episode, so the crowd cheers for R-Truth’s music then stops when it’s just Otunga. Anyway these two slug away at one another until Wade has enough and dunks Dave outside to work on his back. Cole & Mathews argue over who should be calling the action which is a good sign. Otunga sticks to slams and shoulderblocks and looks decent but it can’t save him from Wasteland.

Winner: Wade Barrett (4-3) (Otunga looked better than previous weeks because he was able to bend parts of his body this time.) 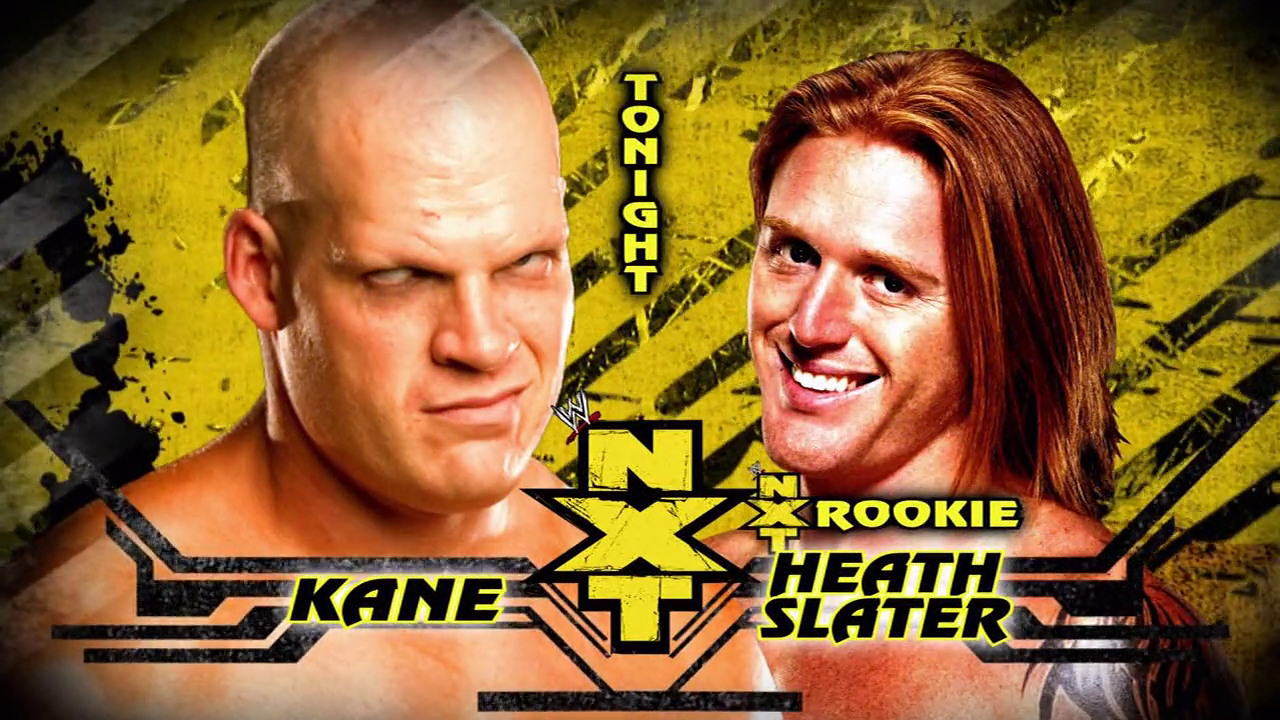 On Smackdown, Kane challenged all of the NXT Rookies and dominated all of them until they decided to team-up and attack him for the DQ. Eight NXT Rookies attacking everyone? Pfft, that’ll never work. Slater uses his speed to keep Kane away from him before connecting with a Missile Dropkick and Top-Rope Crossbody for a close two which sadly only the commentators bite on. Kane goes back to being Kane for a bit as the crowd abandons all hope of cheering for Slater because everyone loves Kane. Cole calls Slater “The Rock Star With No Instruments” in a beautifully monotone way to crack up Josh. Slater gets his foot up on a charge but this only annoys Kane who ends him with a Chokeslam.

Winner: Kane (Well they weren’t going to have fucking Kane lose to a NXT guy but they needed some star power on the show to keep that prestigious 1.0 rating on Syfy. So it was only a mostly-complete waste of time.)

Overall: I liked the Keg Challenge and the quick series of matches but the main appeal of the show is reading about what a huge uncoordinated mess it was with many of the Rookies not knowing what they should be doing.

For an example, here’s Michael Tarver talking about the Keg Challenge (from Wrestling Inc.)

We started doing it, and the first time was going to be the keg carry challenge. I knew I wasn’t going to win that, I wasn’t going to carry around a 200 pound keg. We thought it was going to be light, but it wasn’t a work at all. The way Ryback threw it on his shoulder, he’s a beast. I knew I had to make an impact somehow, so I figured I’d drop the keg. Everybody is going to try to win, but what if I make myself the biggest loser? I cut this big promo, made sure I was theatrical on the stage, picked up the keg, took two steps and dropped it. Picked it up again and dropped it. They blew the whistle and people are like ‘what?’ It was a shock, which is what I was going for. I threw a temper tantrum and got thousands of people chanting ‘loser.’ I was hoping they saw that in the back. I get back in line, and the guys didn’t know I was doing that. They thought I really dropped the keg, and at best thought I was good enough as a heel to throw a tantrum and get a reaction. It was planned. I walked up to people in the back and people were looking at me weird, and Arn Anderson said ‘good job kid, you really heeled out and got a reaction. Good job dropping the keg.’ I looked at him and said ‘I dropped the keg on purpose,’ and he said ‘What?! Why would you do that?’ I said ‘Everybody is going to try to win. Why not be the biggest loser? They’re going to talk about me more next week than the people who won.’ He didn’t believe me, I told Kidman and he said to my face ‘Yeah right. You’re not smart enough to do that.’ Some of the people believed me, some of the people didn’t. Sure enough, the next week, the first thing they show next week is Michael Tarver dropping the keg. I told you guys. I threw the next challenge, and every week they’d talk about ‘what is Michael Tarver going to do next?’ It worked.

It’s Promo Week next time so until then I’ve been Maffew and here’s a dude shooting himself in the dick with a confetti gun during Joey Janela’s Spring Break 4.

Shoutout to the dude who hit himself in the hog with the confetti gun. #JJSB4https://t.co/iXcFPi1ZZ4pic.twitter.com/FRDTVLvNXa