Matt Striker does his best to explain the concept of Pros voting Rookies off every week while noting Pros can’t vote for their own Rookies. No-one says when that’s going to happen but at least there’s some direction now.

This is a rematch from last week’s quick squash with Josh speculating Darren got distracted by the bright lights of NXT because he’s so used to the party lights of South Beach. That was a missed opportunity for an Adam Rose type gimmick, bollock-deep in a rest-hold and about to fade out when all of a sudden the lights start flashing and the pulsing beats of Bomfunk MC’s Freestyler kickstarts his comeback.

Mathews sells us on Otunga’s strengths, which are “knowing Jennifer Hudson.” Young comes back from a clothesline in the corner to sink in the chinlock as the crowd claps along with Otunga’s Pro, R-Truth. Apparently MTV and AOL were talking about Otunga’s appearance on the show but Cole admits it’s more to do with his star wife Jennifer Hudson. I mean, he’s right but that isn’t helping. Young knocks Otunga off the apron to take us to break and when we return we get Chinlock II followed by a cravat and then Chinlock III: Because Coppola Needed The Money. Otunga escapes but gets taken down immediately and put in (JESUS) another chinlock. Otunga makes a firey comeback with some giant clotheslines and the crowd is cheering because there’s movement. He counters a neckbreaker to smash Darren out the ring, causing Gallows & Truth to start arguing outside and while the referee is yelling at them, Punk grabs Otunga’s foot allowing Darren to land the Heatwave (Full Nelson into a Flapjack) to win.

Winner: Darren Young (Both men were greener than the 17th March and the best thing you can say is they stuck to what they knew. Which was nothing.)

We have a look at Daniel Bryan’s video package. He reiterates that even though he’s classified as a rookie he’s been wrestling around the world for ten years and we get some photos of him in Japan & Mexico which was a cool thing to see on WWE TV in 2010. He points out he was trained by Shawn Michaels which is more impressive than saying Rudy Boy Gonzalez & the rest of the TWA Crew. Soon as that’s over, Cole emphasises that the indie cred and the “twitter people” don’t matter, Bryan needs to learn how to wrestle in front of millions of people, WWE style.

Backstage, Bryan is being checked over after giving the announce table a suicide dive last week. Wait they just said he refused medical treatment last week because he’s a bad ass and now a guy’s looking at his back seven days later? Anyway Miz runs down Bryan telling him he’s nothing but he needs to respect his mentor anyway. Also Bryan needs to respect DA BIZ by wrestling hurt so he’s taking on Jericho’s rookie Wade Barrett tonight. Luckily Bryan would tone down his style after this NXT run.

We get a recap of David Otunga being interviewed by Matt Striker but R-Truth is furious at his Rookie’s loss and they brawl pretty convincingly while referees try to break it up, with Otunga getting the highlight of his career by yelling “hey watch out these are Versace shorts!”

World Heavyweight Champion Chris Jericho introduces Wade Barrett’s video package. He fought on the streets of Europe when younger and that paid the bills but he needs more. He’s very direct and doesn’t mind stabbing people in the back.

Wade’s video package doesn’t help him half as much as making Bryan look like a kid when they’re facing off in the ring. Bryan’s got his mid-section taped up like DDP so Wade goes to town on it (doesn’t matter which town, WWE will refer to it as “Manchester”). Jericho’s doing commentary and makes a habit of standing up to applaud Wade’s efforts. “He’s like an eagle circling his prey.” Barrett gets dumped outside and Bryan follows with a Captain Falcon-esque knee off the apron.

Bryan then slips on an attempted springboard because of the pain of his twatted ribs, allowing Wade to plant him with The Wasteland for the clean win.

Winner: Wade Barrett (Quick match that got over Bryan’s willingness to destroy his body and also how much better Barrett is than 90% of the Rookies.)

After the match, Mathews talks over the replays explaining “We don’t know the full extent of the injuries to Daniel Bryan’s ribs” and Jericho interrupts with “Yes we do, he just lost because of them you stupid idiot.” He then gives Bryan the Walls Of Jericho for good measure with The Miz…not saving him.

Raw Rebound: Shawn Michaels wants whoever thinks he can’t beat The Undertaker at Wrestlemania to come out and face him face-to-face. Triple H comes out to HBK’s shock but he tells him he doesn’t think he can beat Undi…he KNOWS he can beat Undi. His faith restored, HBK teams with Tripper to take on Miz Show for the Unified Tag Titles. But just as he’s about to Superkick The Miz, Undi appears on the titantron to distract and Miz rolls him up to retain. I thought Undi was above the distraction finish. Anyway, HBK leaves in a huff so Sheamus comes out to smack his work-out buddy to set up a feud that helped no-one.

Backstage, Heath Slater is thrilled with his victory last week but Christian tells him there’s a fine line between confidence and stupidity because all the Pros on the show are all saltier than cured fish because they’re having to appear on their day off.

Justin Gabriel shouts a bit but nothing’s louder than his attire. 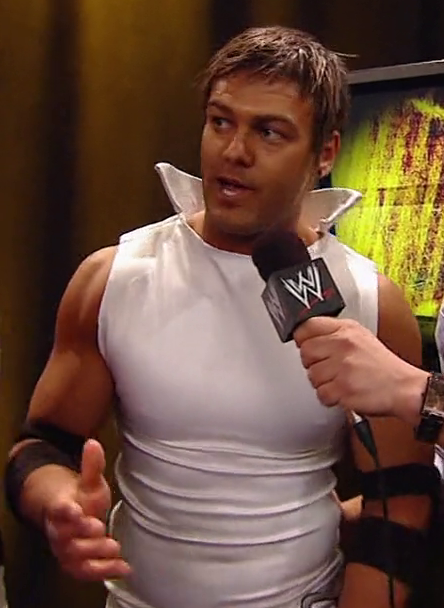 We get a look at THE CORN-FED MEAT-HEAD Skip Sheffield and I completely forgot about Ryback’s attempt at a Southern accent. “Am I properly trained? Hell no! YEP YEP YEP WHAT IT DO.”

And after the video package, we cut to a disgusted William Regal as Cole yells “what the hell was that???”

Cole tells us Regal compared Skip’s personality to an open grave earlier today as both commentators are threatening to lose it. Crowd is very behind Matt Hardy. Justin’s able to use his size to take down Skip and because he’s with Matt, the crowd approve. Justin uses Matt to splash Skip in the corner like Jeff Hardy and we go to break as Regal yells at Skip to “keep breathing.”

When we return, Regal is sending Justin across the ring with suplexes so smooth you’d think they were peanut butter. Regal informs Skip this is what he should be doing, which allows Matt to make the tag. Regal sends Matt to the outside so he can give Skip some advice, he tags in and immediately lands the SKIP SHUFFLE.

It gets two. Regal yells at Skip because that’s not what he meant. Skip works over Matt to get the kiddies into it and they’re cheering so loud, Matt’s able to yell spots to Skip and no-one notices. Regal gets distracted yelling at Skip so Matt Twist Of Fates him head-first into the canvas who tags into Justin to land the 450 Splash to pin and impress.

Backstage, Striker is talking to the Rookies but Carlito walks in and spits an apple into Heath Slater’s face before walking away. Heath has to stand there going “that’s cool? that’s cool??” before Striker looks at the camera and says “that’s NXT.” No-one cheered.

Overall: What a fever dream this show is ten years later. Cole is currently in ”heel but you can see where he’s coming from” mode rather than the “Can’t Shut The Fuck Up” mode he’d get stuck in later on in the year so NXT Season 1 continues to be fascinating in hindsight, especially when Cole says “Wow imagine if one of these guys headlined Wrestlemania one day?” every episode.