The penultimate episode, time to put on the blindfold and light the cigarette.

We start off with Alleged GM Tiffany assuring the roster that ECW dying is a good thing as they will all be free agents with the ability to go any brand (or leisure centre) that’ll have them.

Speaking of free agents, Gregory Helms was released from his contract after the skirmish last week involving himself, booze and Jericho. 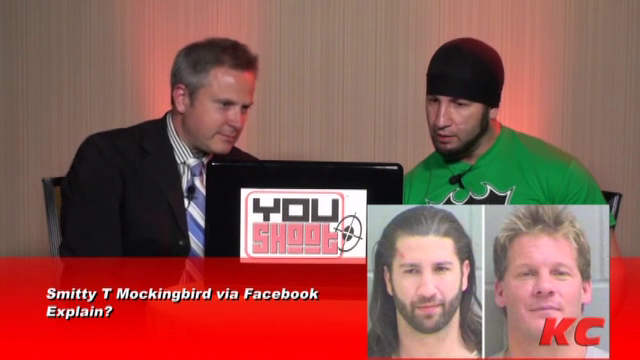 In Helms’ Kayfabe Commentary YouShoot he claimed it was simply a drunken slap fight between friends but the cab driver started panicking and called the police…who took them to the station for fan photos. Apparently they only received citations and were never read their rights but it was all blown up by the time they got back and that was it for him. Couldn’t have come at a worst time for him but he asked WWE if he could use The Hurricane name and mask and they gave him the go ahead because apparently it’s rare any ex-WWE guys actually ask for permission.

Tiffany tells the crew to go out and enjoy themselves because she will be, as it’s Mardi Gras and the Saints just won the Superbowl (which gets the biggest pop of her career from the crowd).

These guys are still feuding wit but luckily for us, the impending doom has motivated Goldust to start bending his limbs again. YoshiDust work over Trent until Baretta gets the fancy counters to even things up. Trent takes a big flapjack into the corner for Goldust to get the mild tag. Trent then runs around the ring and then back in, getting a tag on Caylon in the process then hanging in the ropes daring Goldy to come get him while Caylon nails him from behind. Trent’s running on unleaded goofiness. After a break, Caylon tries sending Goldust into the corner but his leg’s too damaged to continue running so the Dudebusters go to town on it. This continued assault finally gets the crowd into it after the editing team had to censor “this is boring” chants a few minutes ago. Goldust tries to escape the corner but Caylon defends like he’s Warren Barton and Goldy is forced to take more foot fuckery. Trent delivers his finishing move, the Daft Bugger.

It’s not enough to put Goldust away who inches nearer and nearer to Yoshi who gets dumped off the apron by Trent but immediately gets knocked down on Goldust who makes the corner…only to take a schoolboy roll-up. However he recovers quickly enough to land a quick powerslam and mashes the pad quick enough to tag in Yoshi who explodes with big kicks and the chinlock rollover thingamajig. Yoshi gets the Spinning Wheel Kick off the top onto Caylon to explode his nose open but Trent stops the pin, only to take a bulldog from Goldust and allow Yoshi to kick poor Caylon again to win the match and the tag title shot next week.

Winners: Yoshi Tatsu & Goldust (This looked like it was going to have as much heat as crystallization but they were able to work out all the kinks of the previous encounters and get the kids excited. Outside of Caylon’s nose, all four guys looked ready for prime time.)

Hall Of Fame 2010 announcement: Ted DiBiase. Belongs there for the vignettes alone.

Hey it’s Altar Boy Luke! He’s been known as Luke Hawx for years but XPW Never Die. Perry tries locking up but Zeke sends him into the corner, turns him into Perrycakes and ends with The Book Of Ezekiel. 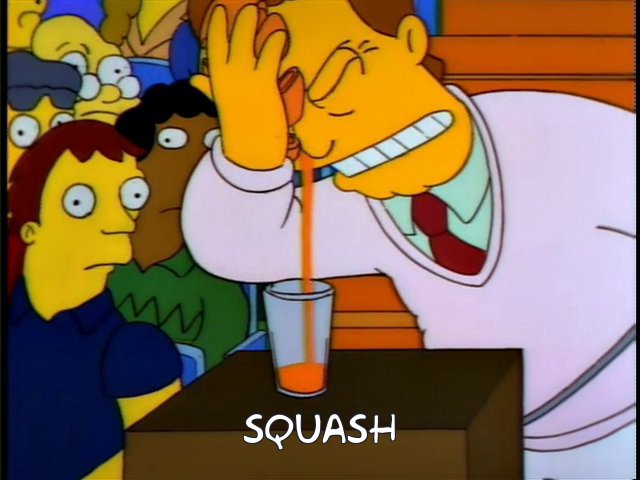 Zeke launches Perry out the ring for good measure. Regal expresses his concern for Tiffany’s bias towards him for removing him from the Rumble title match and asks for her last ever decision as GM to be a positive one and give him a rematch next week. Sadly Zeke tries talking again and he’s already shaky without having to get THE BOOK OF EZEKIEL and the other buzz-words in.

RAW REBOUND: Batista attacked Cena after Raw went off the air and Cena blames Vince. Vince admits he was behind it so Cena lets him know Bret wants him at Wrestlemania. Vince accepts so Bret sneak attacks him, causing Vince to call off the match because HE DESERVED TO BE SCREWED. Bret then re-enacts the post-Survivor Series 1997 destruction of equipment and manages to drag a heavy box onto himself.

The editing to make Bret look not like a 52 year old guy wearing jean shorts who couldn’t legally take a bump was Steven Seagal-esque at this point. I’m sure they thought this was the best way to go about Bret’s triumphant return to the ring but it’s just sad watching it back.

Elimination Chamber is in two weeks time and I remember nothing except the finishes (Batista showing up to beat Cena for the title and HBK appearing in Undi’s chamber to set up The Retirement Match).

Christian accepts Zeke’s challenge but only if it’s Extreme Rules. Speaking of which: 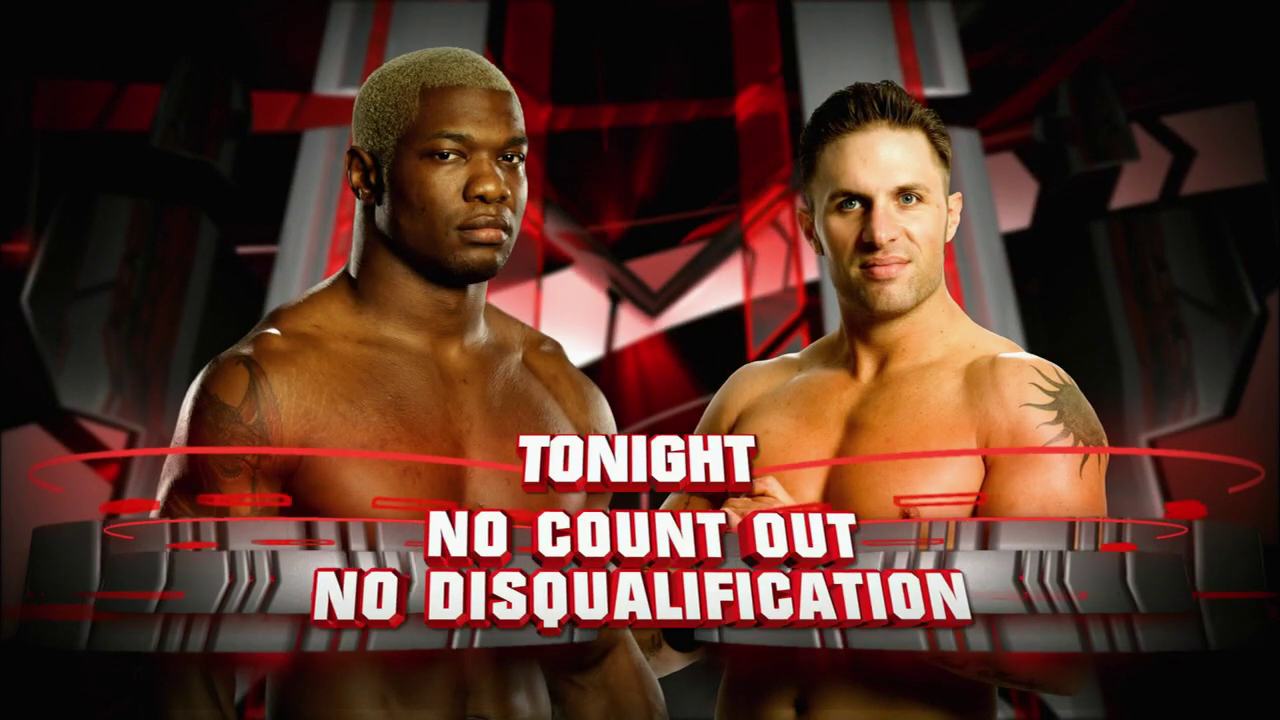 Shelton Benjamin vs. Vance Archer (No Count Out, No DQ, No Reason Why Shelton Is Taller Than Vance In This Match Graphic)

Shelton gets on the mic but the crowd is too busy cheering, pausing him in a state of shock. He’s not the only one. He says “who dat?” and the crowd pops. After some Googling, it turns out The New Orleans Saints fans loved yelling that but during this time there was controversy because the club was sending cease-and-desist letters to anyone making shirts of it. So I guess the fans were really motivated which is why they scream it whenever Shelton pauses for breath like WHAT chants during an Austin promo. Shelton tries explaining that he was better than ECW On Syfy but that didn’t stop him from losing to Yoshi Tatsu really quickly in his first match here. Anyway no-one’s paying attention so Shelton yells WHO DAT and the crowd goes BANANA because he said the thing. 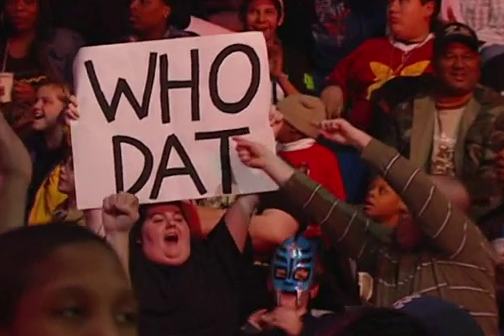 Shelton is more cautious than last week, trying to figure out how to get something good out of him after last week’s dog-arse encounter. Shelton pounds away and manages a Single Crab with Lance getting to the ropes but the ref informing him it’s no DQ so… 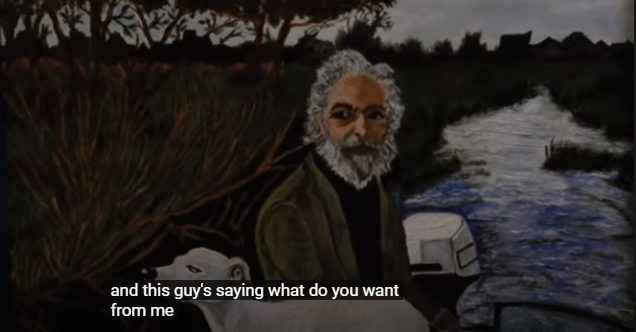 Vance tries climbing the ropes so Shelton scales them to kick him off into the advert break. When we return, Shelton is blocking a Singapore Cane shot with a chair like a PG remake of Onita blocking Pogo’s knife with a table piece. Vance gets two from a kick on the outside which causes Shelton to bleed for real so the match screeches to a halt as the gloved medic wipes vaseline into the wound. Tis but a scratch so Shelton and Vance go punch-for-punch with Shelton hoisting Vance up to the top rope, only to take a giant spinebuster off the top…for two. Vance removes the turnbuckle pad and blasts Shelton’s shoulder off it because he can’t figure out if he’s an evil smart dude or a giant fuck. Shelton is encouraged to not tap out to an armbar with chants of WHO DAT and he plants Vance with a picture perfect release German Suplex. In a weird ending, Shelton scales the corner without the turnbuckle pad and seems to wait for Vance to do something but nothing happens so he gives him a Blockbuster instead before finishing with The Paydirt.

Winner: Shelton Benjamin (As good as it was going to be with a crowd more vested in a chant and Vance unsure what he’s doing or who he is.)

Overall: Some guys looked hopeful and others looked like they were hoping for a quick death. Of course it’s wrestling so the best guys aren’t in the business and the worst guys are doing better than ever so go figure.

Well next week will be the last one ever and I’ll wrap things up with a Where Are They Now? and some thoughts on a show that doesn’t get the positives appreciated enough.