We’re in Houston, Texas and Josh Mathews is starting the show so you’d better bring some rope to tie yourself to your chair in case you fall off with excitement.

Josh explains the “Revolutionary New Concept” known as the TLC PPV but before he gets to explain how a ladder works, Kozlov interrupts to call out Zeke after he ditched him last week. Zeke’s eager to get it on but Regal’s right behind him and separates them by begging. Shelton Wearing A TLC 2009 PPV Shirt Benjamin says he wants action and encourages them to go at it but Regal points out there’s only one of him. as Christian & Yoshi Tatsu show up for back-up as we have our main event tonight. Wait it’s not official until Alleged GM Tiffany shows up (to zero reaction) and makes The Roundtable vote on if they want a Six-Man or Zeke vs. Koz, with the Six-Man winning. Long segment that covered everything important going on in ECW right now and establishing Kozlov dislikes Zeke but is still loyal to Regal. And The Greeks. 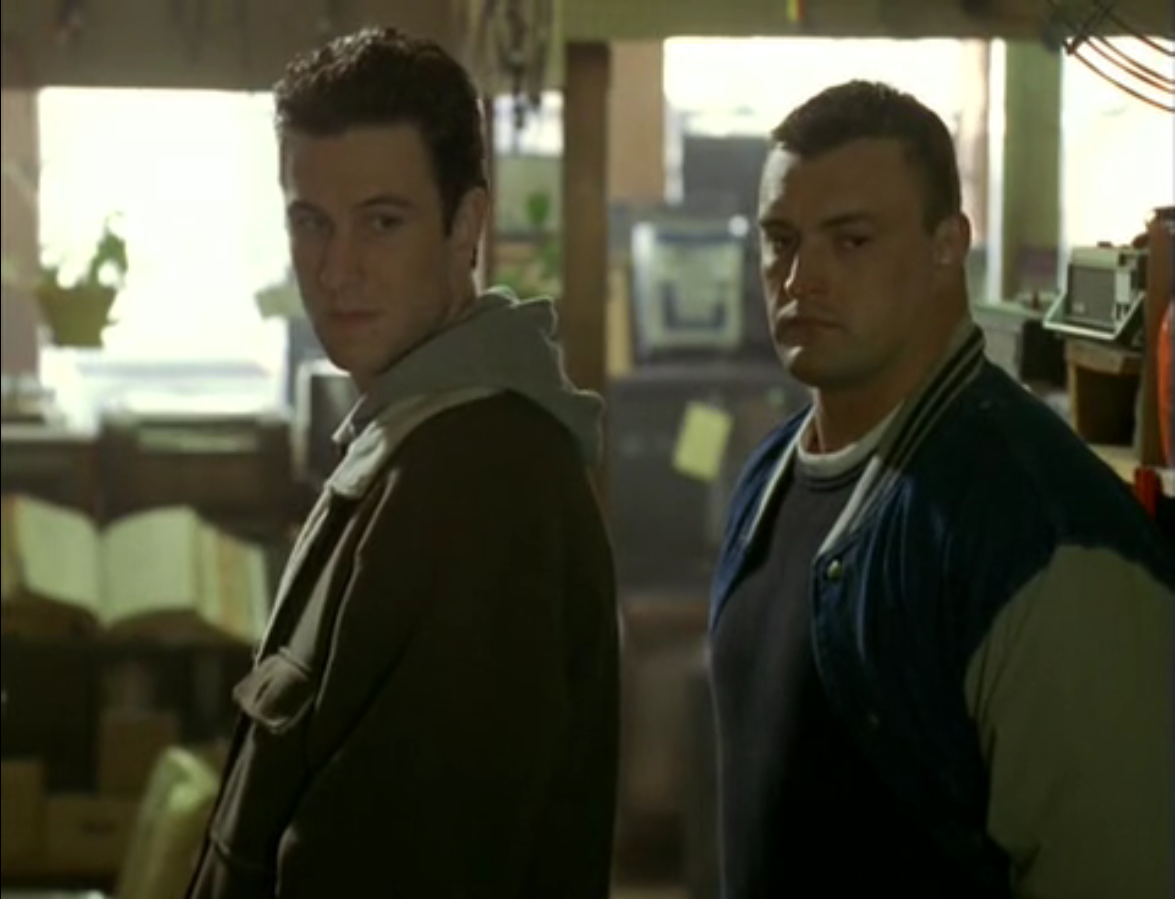 Big pop for Dreamer who hasn’t been seen for weeks as he’s been busy appearing in Tommy Hall’s Impact reviews. Archer dominates The Heart, Soul & High Blood Pressure of ECW until he escapes a chinlock with the power of nostalgia. Tommy gets his firey comeback and even manages a Frog Splash off the top while the adults in the crowd tell their kids about the time he was choke-slammed by Brian Lee. DDT is countered into a big boot and Vance finished with the fearsome Reverse DDT.

Winner: Vance Archer (Vance’s first non-squash and he followed the Big WWE Baddie blue-print to a tee, meaning his opponent did all the work but Archer did one move and we’re supposed to be impressed. I’m not buying Attractive Snitsky.)

We look back at Superstars and you know things are going well when the D-Show is making a cameo. During The Hurricane vs. Zack Ryder match, a masked man dropped Helms with a Jackhammer and no-one knows who it is.

Immediately afterwards we go to Tiffany yelling “PAUL I KNOW IT’S YOU” so I’m glad WWE was able to keep the continuity going between two shows. The Ripper clarifies that even though Burchill lost to The Hurricane, The Ripper is undefeated! Tiffany clarifies that The Ripper isn’t a member of the ECW roster so he should leave. “But what about the New Talent Initiative?” Ha! Tiffany gives in and tells Ripper if he beats The Hurricane next week he’ll get a contract. Burchill was great hamming it up.

Backstage Zack Ryder & Rosa Mendes are being all lovely-lovely until Dreamer shows up to be fat. Ryder rants about how others call him washed up to get under his skin but Zack means it when he says it because he grew up watching him and now he sees how bad he is he wants to end him. Decent promo from Ryder, proving women are a great motivator.

I forgot to mention it last week but if you haven’t heard Don’t Call Them The Dude Busters’ theme yet then you owe yourself a click:

Bryon mentions the twinks’ fondness for Guitar Hero & Mario Kart and anything else Chris Sabin & Alex Shelley have already expressed an interest in. Mark gets played with until Trent prevents a tag and they finish with the Atomic Drop/Claymore combo. Highlight was this display of shit-housery:

It must have been effective as Mark retired two months after this so well done Trent.

Raw Rebound: Guest GM Mark Cuban books Randy Orton vs. Kofi Kingston with Mark Cuban as ref. He fast counts Orton and reveals he wanted revenge after taking an RKO from him six years ago. It took Kofi ten years to get his revenge so maybe in 2021 Rochelle Loewen will get hers. Also John Cena and Sheamus get into a dramatic confrontation that sees Cena decked and Cuban put through a table, which is a lot of effort for a guy with no chance of winning the title this Sunday. 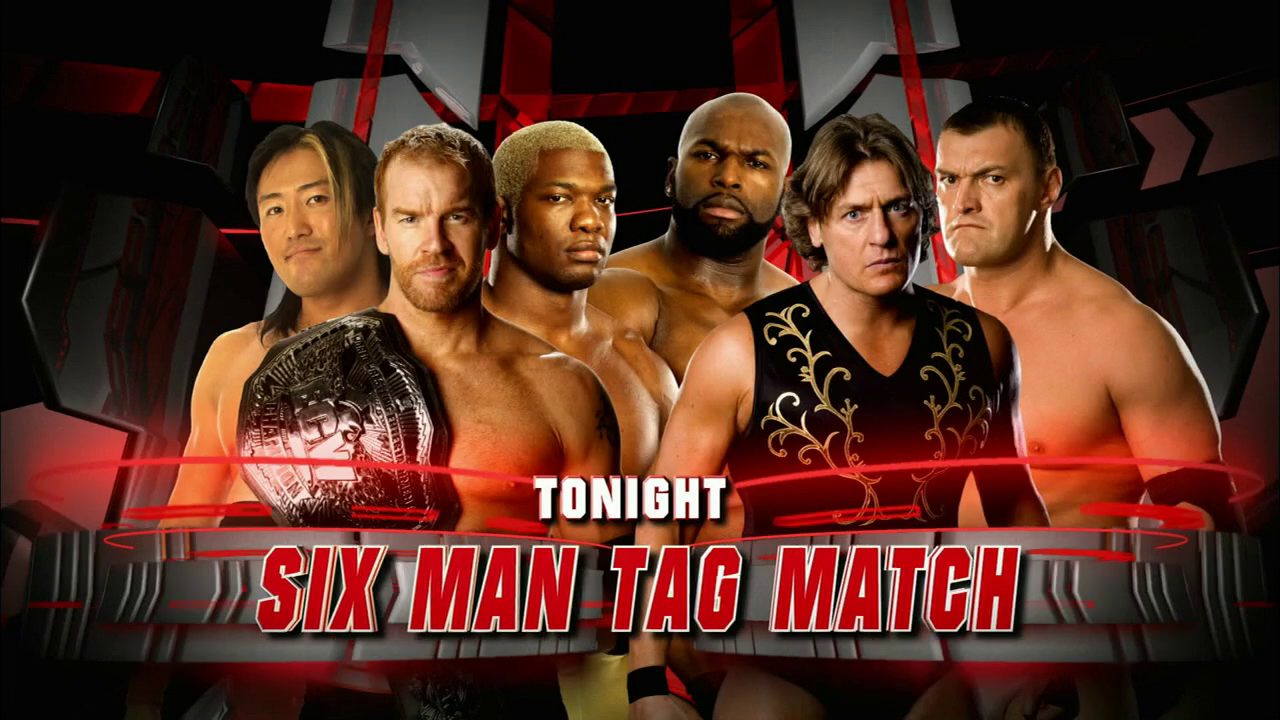 Zeke starts off with Christian and slams him repeatedly, which is the only thing I remember him doing on the main roster. Regal gets tagged in but Christian lets his mates have a go. Kozlov saves Regal but ends up getting sorted out by Shelton until he remembers to bring him to the other corner where he’s ganged up on to send us to break. When we return, he’s still getting turned into glue by the Roundtable and this goes on for a while. When Regal’s building heat, we get some nifty holds to make it interesting but Kozlov’s doing it this week so it’s all chinlocks and looking like the eagle from The Muppets. They get a false tag to further drag this on until finally Yoshi gets the hot tag and…immediately gets downed by Zeke. However Zeke goes for the tag to Kozlov but he hops off the apron and leaves him (like Zeke did last week) so Zeke chases him up the ramp. Regal holds him off but in the process gets his team counted out, but no one cares about that as Shelton takes both men out with a Tope Con Hello. While that’s going on, Christian decides now’s a good time to set up a ladder and grab the ECW Title that’s suspended above the ring but Shelton recovers and springboards to destroy the ladder which somehow stays erect long enough for him to tug with Christian as the show goes off the air. 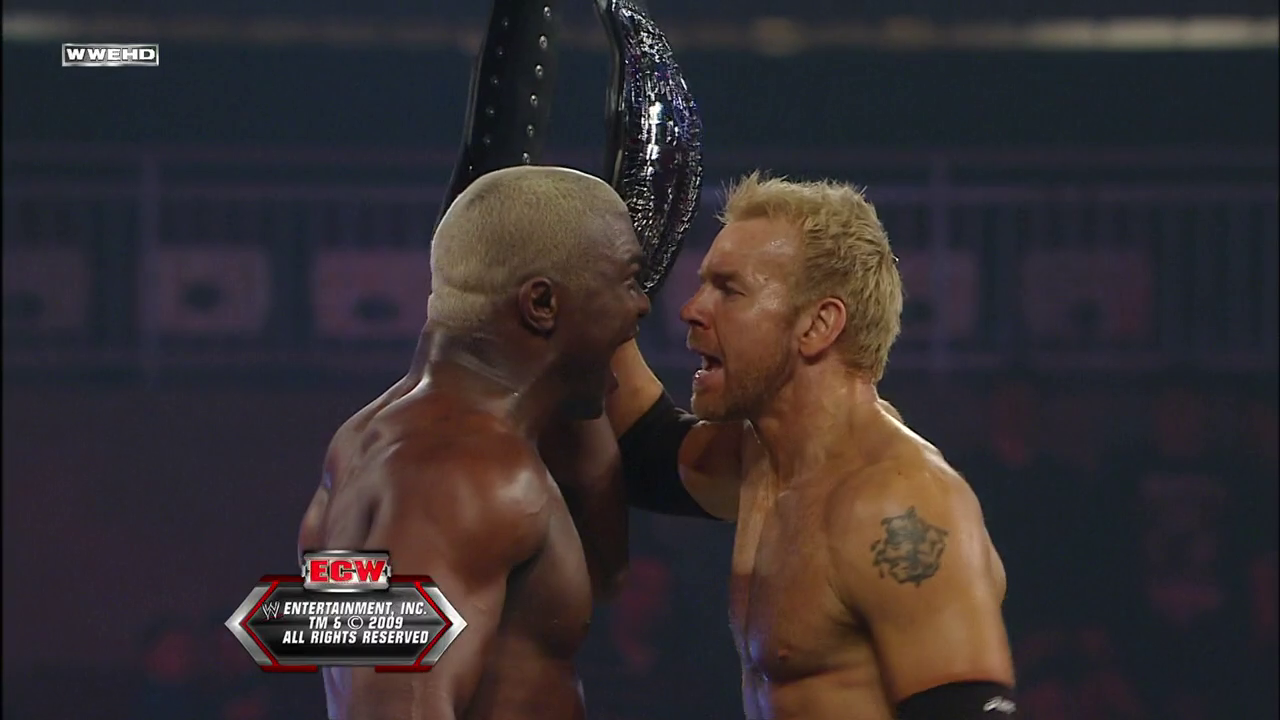 Winners: Christian, Shelton Benjamin & Yoshi Tatsu (Did what it was supposed to do (make Shelton look good, continue the Roundtable implosion, kill twenty minutes) but it was done in the dullest way possible so make like The Futureheads and skip to the end. 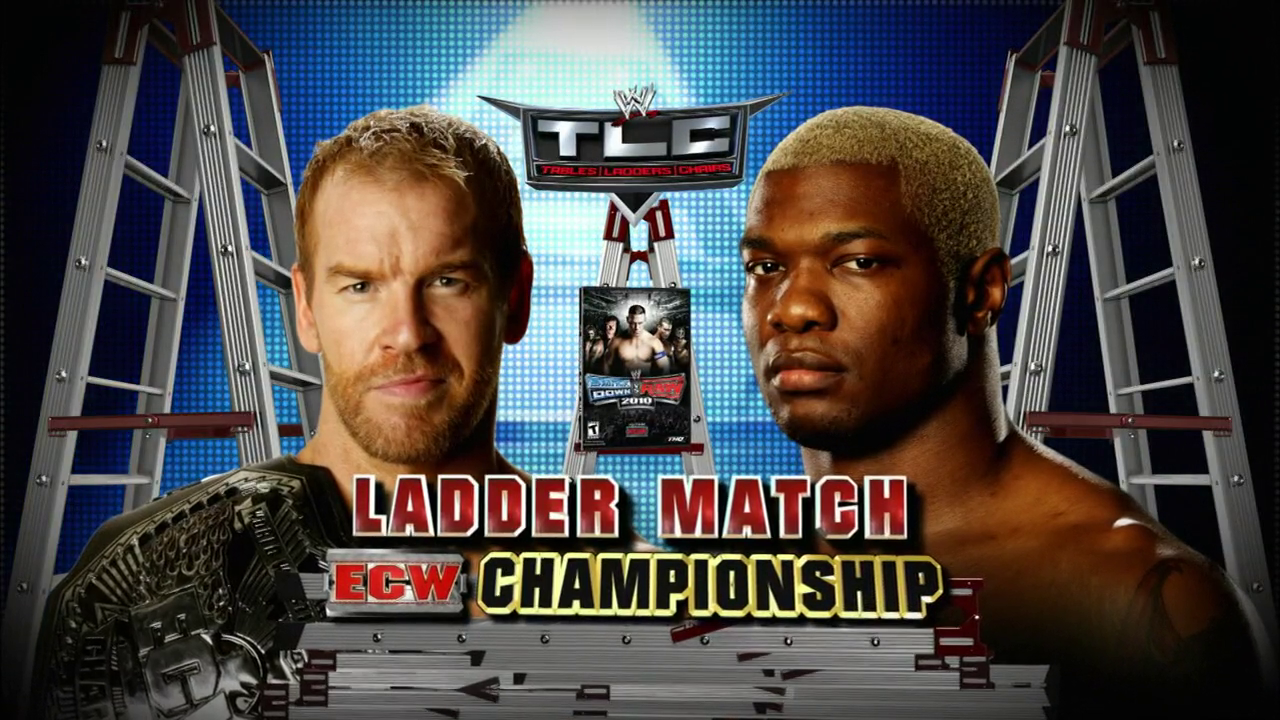 We’ve got the Cole, Lawler, Striker commentating team and they’re already being awkward with one another and it’s only the first match. Crowd is BANANA for the feeling out process and nearly drowns out Striker’s weird fascination with odd statistics. “The ECW Title has never changed hands in Texas!” Fucking AND? Shelton knocks down Christian with a crossbody off the second rope then blocks an Unprettier attempt with a sweet backbreaker as this crowd is loving everything. Striker: “As ECW went off the air, Josh Mathews called the image of both men climbing the ladder “symbolic”…what it symbolises remains to be seen.” What happened to him once he got to Raw? Was Vince’s yelling so loud he couldn’t think? They start brawling over ladders at ringside, with Christian taking out Shelton with a crossbody to the outside which allows him to set up a ladder in ring. Shelton puts a stop to that with Christian attempting a monkey flip…but Shelton lands on his feet and immediately starts climbing fast so Christian has to yank him off and send him to the outside. After a quick think, Christian takes down the ladder to launch at Shelton but his plan gets foiled when Shelton grabs his feet causing the ladder to drop on his face, busting him open. Sadly it’s during that period when any blood needed to be scrubbed clean immediately so the crowd boos as a medic fulfils Vince’s dream and covers Christian’s face. 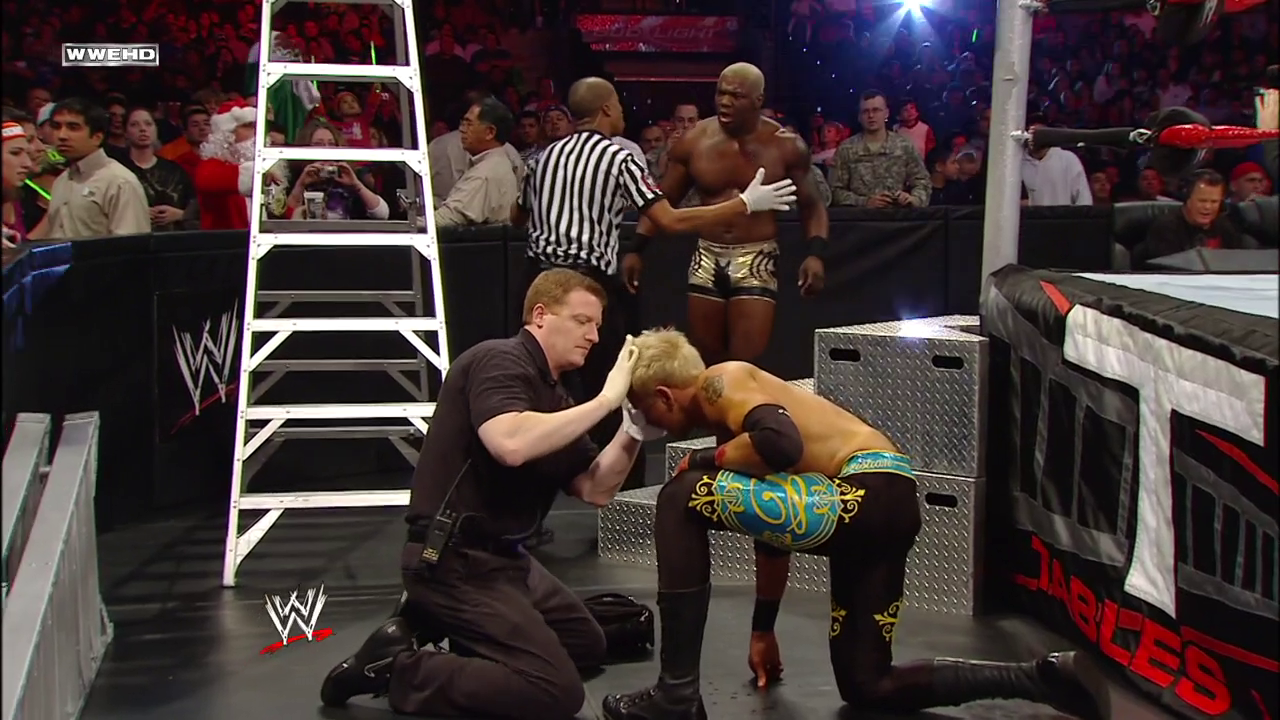 Poor Shelton has to stand there before getting fed up and deciding to climb the ladder, causing Christian to attack him and dump him over the guard-rail. Christian then tries to set up another ladder but he spots Shelton climbing and realises he’s intent on diving so he lets him and does everything he can to not catch him.

Shelton is angry (Striker wonders why) and sets up a ladder between the announce table and the ring. After diving underneath it, Shelton attempts to slingshot Christian but gets kicked into yet another ladder at ringside. Shelton gets in the ring quicker than Christian was expecting so he gets set up for a ladder-assisted Stinger Splash but Christian yeets it brutally into his face mid-jump. Christian climbs the ladder again with Shelton pushing him but can’t decide if he wants Christian or the ladder so they both fall and Shelton’s like “errr” until deciding on an enziguri. Shelton then completely messes up a ladder rebound spot and the chemistry these two were demonstrating at the start has gone, probably due to the blood stoppage. Shelton tries climbing but Christian follows and sends him to the canvas with a smooth-looking Fuck You Vance Archer (reverse DDT). Both men take a second to get their breath back and we get a sweet segment with Christian attempting to ram top-rope Shelton with a set-up ladder, only for him to use it to vault the ladder into an upright position and within grabbing distance. Christian then tries pushing it back from whence it came, Shelton lands on the ropes, adjusts his feet and bounces the other way and uses the momentum to clothesline Christian on the way down. 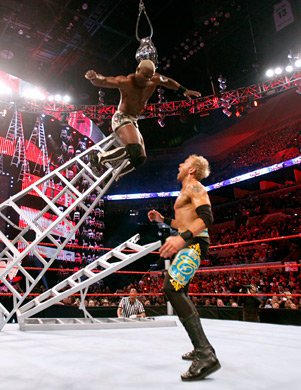 God that looked good. Shelton’s convinced Christian’s dead but no such luck as he interrupts his ladder climbing with Benjamin retaliating with an over-the-shoulder slam off the middle of the ladder with a ton of force. Christian can’t stand but he knocks the ladder down to make sure Shelton can’t grab the title in a nice bit of psychology. Shelton responds by landing that Stinger Splash he was wanting before. Shelton goes climbing once more but Christian has enough and removes the ladder from under his feet, leaving him dangling off the title. Christian has a change of heart and sets up the ladder so HE can climb it, leaving Shelton to yank the ladder and put Christian in the same position…followed by waiting for him to drop into his waiting shoulders and delivering a Sting Killer Running Powerbomb right into the ladder in the corner. 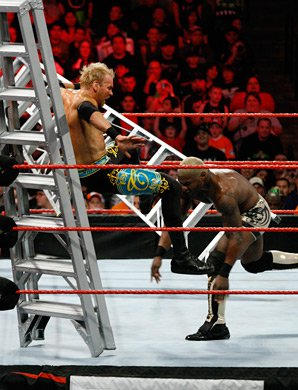 Christian looks dead but somehow has the strength to follow Shelton up the ladder as Shelton is not following the rules of “climb slower the longer the match goes on.” No wonder he’s always in multi-men ladder matches, it takes six guys to keep up with him. Christian gets dunked mid-way so Shelton can go for a crazy over-the-ladder Sunset Flip, but Christian turns it into a Frankensteiner in the corner. No-Selling Shelton doesn’t care and tries to German Suplex him off the apron in a tribute to Team Angle, but Christian uses the ropes to land the back-leg thing he does, leaving Shelton spread across Chekhov’s ladder and in prime position to get smashed via a crossbody. 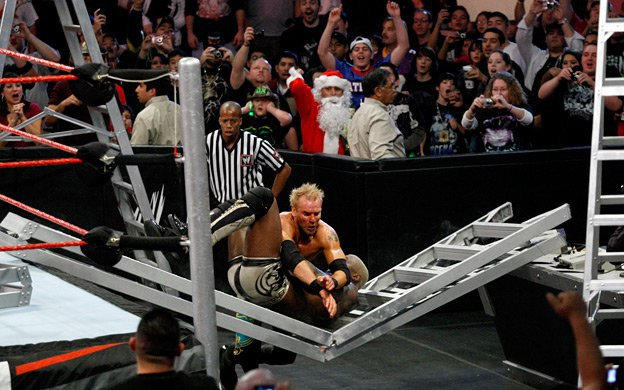 Christian uses the last of his energy to scale the ladder to finally grab the title and it’s just as well as he looks ready to quit for TNA after all that.

Winner and still ECW Champion: Christian (These two went above and beyond what was expected from the C-Brand and the storyline reason of Christian picking Shelton because he “wanted to steal the show” may have been closer to reality than we realised if the locker room already knew ECW’s days were numbered. Or maybe I’m fan-wanking. Either way, a hell of an effort from both men and this is from someone who’s become numb to ladder matches. Recommended.)

It’s a shame nothing else happened on the PPV. 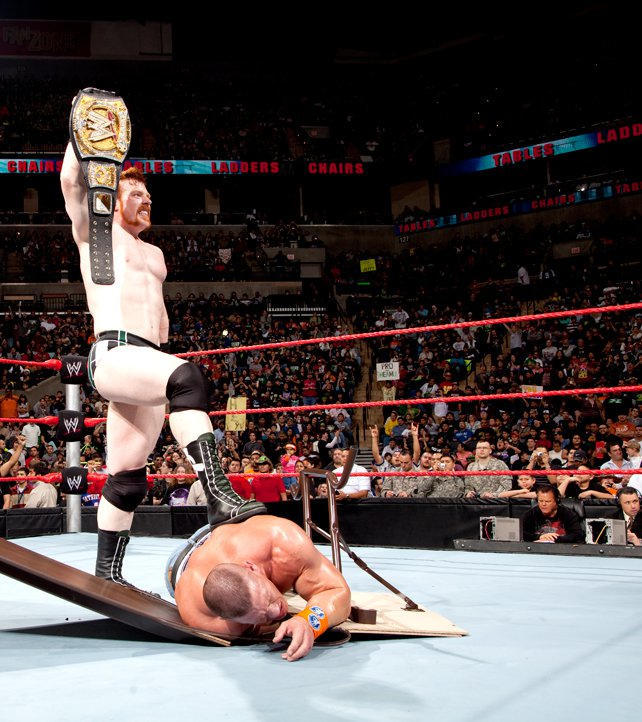 I’ve been Maffew and I still don’t understand.