We’re getting near TLC and nearer to death so why not have new talent debut?

We start off with The Abraham Washington Show to warn children of the effects of opioid addiction. Abraham discusses Thanksgiving with Tony, saying if the Pilgrims had landed here in Virginia they would have gone somewhere else for their cranberry sauce.

Abraham hears that Virginia stuff their turkeys with roadkill.

Abraham knows the people here are stupid because Tony’s from Virginia.

Anyway Zack Ryder & Rosa Mendes show up to exchange poems and if you want them transcribing you can fuck off to WWE Network and watch it yourself. Ryder is so thrilled with Rosa’s (even though it ends in Spanish and he doesn’t speak it) that he starts jumping on the couch à la Tom Cruise in a reference that’s only five years old at that point. Abraham also has a poem for Zack:

get off my couch foo’

before I call the police on you.”

Tony tells us the segment is over, Tom Segura did nothing wrong.

We get reminded that Zeke turned on Kozlov & Regal last week however Zeke’s the understanding type and accepts Regal’s apology. He still dislikes Kozlov because he caused it all but Regal keeps them together because the rest of ECW *wants* them to split up. Actually the rest of the ECW wants to know if they’ll be working Superstars or construction come February.

Hopefully Regal’s got enough tricks in him to hide the fact Goldust has been moving like the Tin Man before the oiling. Regal gets knocked around until Goldy sets up Shattered Dreams in the corner and The Roundable distract the ref so Willie can free himself and do twat him in. Goldust tries a Sunset Flip but Regal blocks it with a knee drop. The crowd’s love for Goldust powers him out of a chinlock but as he bounces off the ropes, both Zeke & Kozlov go to grab his foot and the angry, muscled noises at ringside distract Regal who loses to a schoolboy.

Winner: Goldust (The most flexible Dustin has looked in weeks, Regal The Clown’s Pocket strikes again.)

Kozlov immediately gets in Regal’s ear to let him know it was all Zeke’s fault but they leave as a unit…with Regal giving Zeke the evil eye as they leave.

Backstage, Paul & Katie Burchill try to argue that Hurricane sucks so it doesn’t mean they should have to leave ECW because they lost. Tiffany disagrees (well she doesn’t argue the first point) so they leave, allowing Trent Berretta and Caylen Croft to make their main roster TV debut as they inform the world that ECW has signed The Dude Busters. 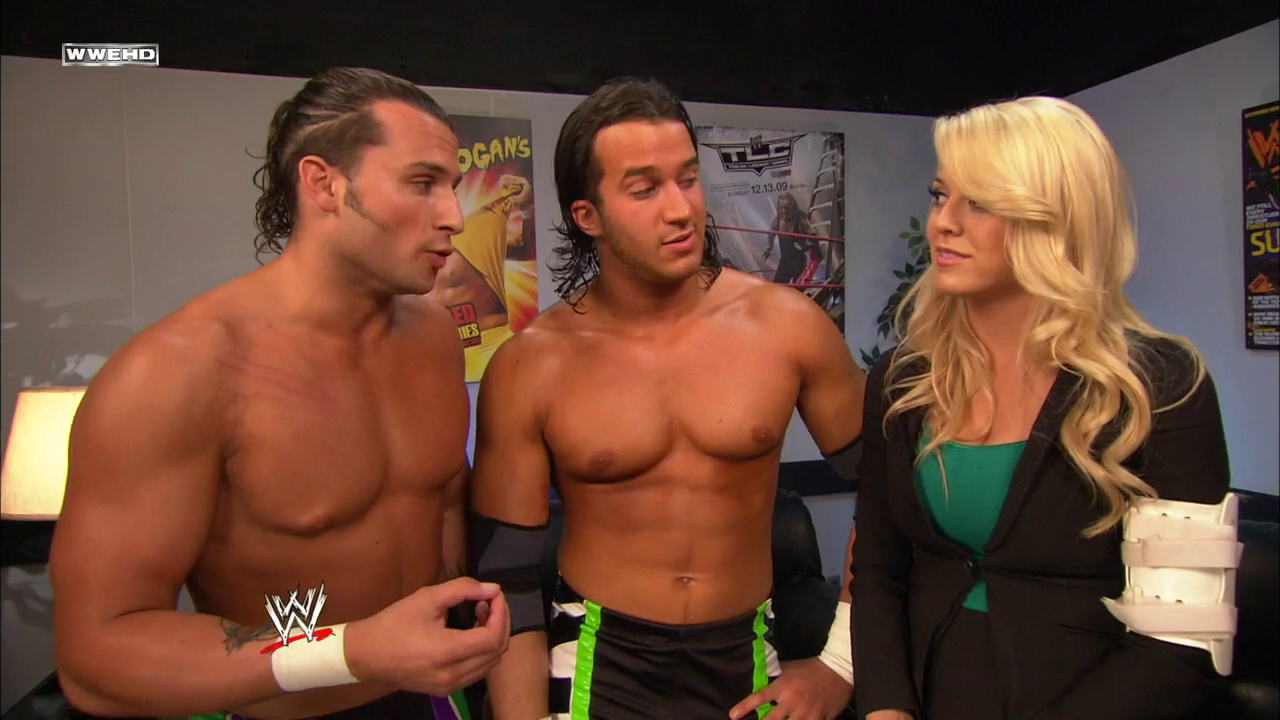 They’d been teaming up in FCW for years during Caylen’s second run in the developmental system (he’d been in OVW 2003-2004 but had been released due to behavioural issues which was news to me until I checked his wiki two minutes ago) and they endure themselves immediately by telling Tiffany she needs to start riding a wheelchair and talking via a computer because they’re about to make her look like a genius.

Don’t know why they’d introduce themselves as The Dude Busters then immediately stop using the name but never mind that: Here’s Bobby Shields wrestling John Kermon while some nob in a suit is hosting a No Mercy tournament.

Trent & Caylen show off their double-teams while Byron talks about how much they love playing Guitar Hero and an Atomic Drop/Claymore combo ends a quick squash.

Winners: Trent Berretta & Caylen Croft (Finisher was nice but they’re not being subtle about these guys being The Midnight Rockers to The Motor City Machine Guns’ Rock & Roll Express.)

Vance Archer gets an interview/promo package but the only thing he’s done is kick people and stare at the camera so it’s not quite Karrion Kross’s NXT debut.

Smackdown Rebound: Champ Jericho defends his title against The Undertaker but not much happens until Batista attacks Undi with a chair and someone somewhere goes BYE JOVE, IT’S A GOOD THING TLC IS COMING UP SO YOU LADS CAN HAVE A CHAIR MATCH. And they’d do this every year.

Backstage, Christian walks in on Shelton Benjamin playing as himself against Christian in that brand new WWE Smackdown vs. Raw 2010 game everyone’s talking about. They agree to put their differences aside until TLC but Christian switches off the 360 with the game still running, probably bricking it and giving us a preview of 2K20. 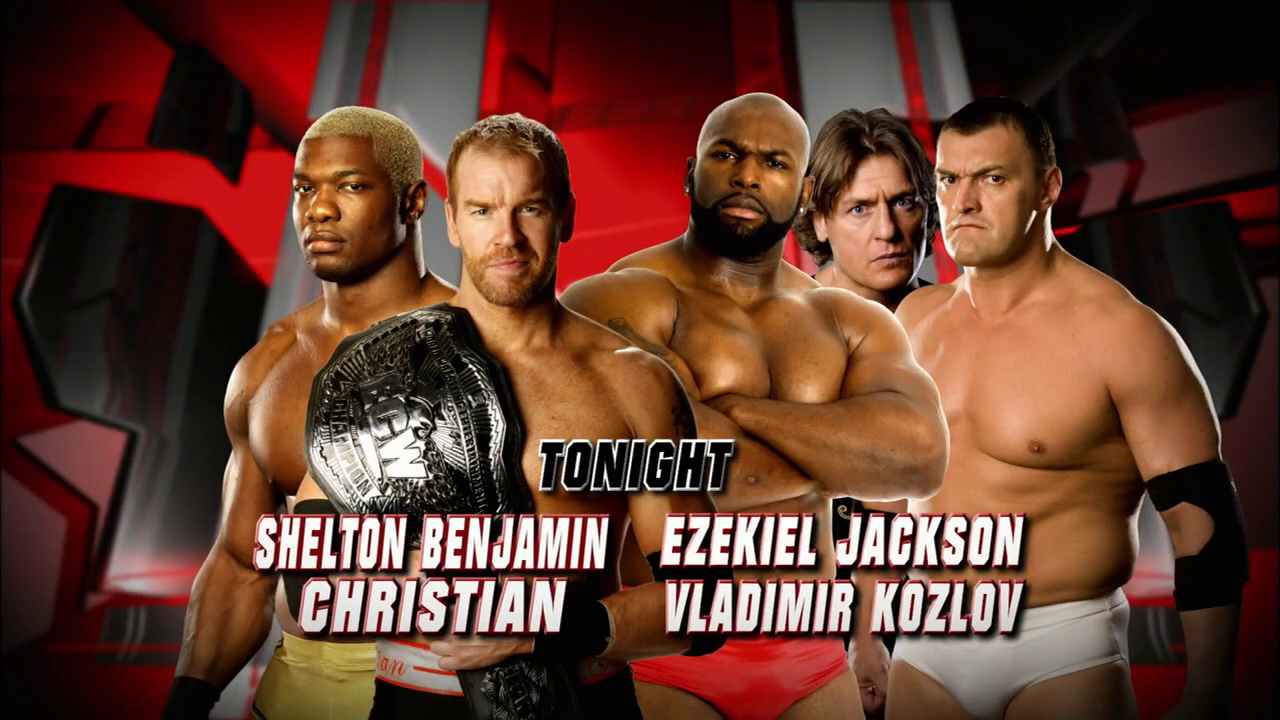 Anyway Zeke uses his strength against Christian because what else is he going to do? Demand he move seats on a plane? Shelton tags in to save the day before getting bodied off the apron. When we return from break Shelton is still getting squished until he breaks free of a bear-hug and Christian connects with a Missile Dropkick. He takes too long mouthing off at Kozlov so Zeke starts landing those arm-behind-the-back-slams Arn Anderson used to love so much. Kozlov is finally allowed to tag in before getting bored and tagging in Zeke to resume the slams, yells and rest holds. Eventually Kozlov gets a blind tag with such a hard slap that it makes Zeke go “ahh”.

And would you believe it, Christian is able to make a comeback on Kozlov with a Tornado DDT. Christian is finally able to get the tag so Kozlov tries to tag in Zeke again…but he’s too fucked off at Kozlov ruining his hard work so he leaves the match.

Kozlov is too traumatised to notice Shelton who nails a Stinger Splash for the 1-2-3.

Winners: Christian & Shelton (One of those matches where the story was more important than the match so only watch if you really want to see Christian getting squished like grape-wine for eight minutes.)

Overall: I’m sure there’s big Trent? fans that want to see the curiosity factor of the last New Talent Initiative to show up on ECW but the rest is an easy skip. No idea why they’re doing the Zeke turn in reverse where he slams both his mates then next week he leaves the tag match. Maybe next episode we’ll get backstage footage of him forgetting to hold a door open for Regal.

I’ve been Maffew and I’ll continue to be for the remaining eleven episodes.