It’s Veteran’s Day and somehow WWE is able to put on a wrestling show while patting itself on the back.

We’re in Sheffield, England for this week which can only mean a hot show and we start with…The Abraham Washington Show? 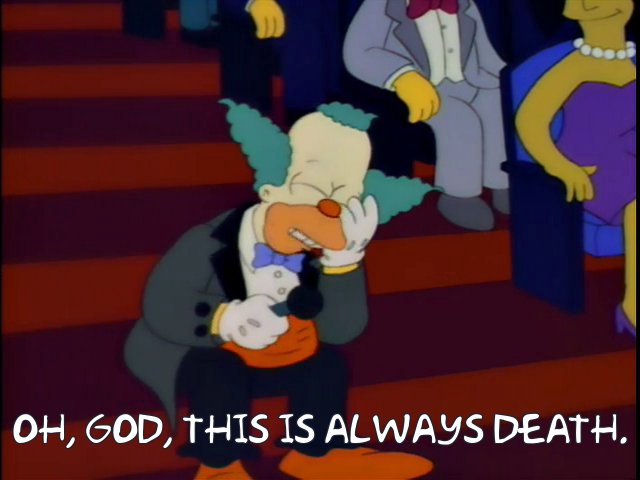 Tony Atlas laughs because the people over here talk funny and have bad teeth. Yoshi is the guest tonight and when he’s not wrestling he likes to say “thank you” and bow constantly like it’s 1944. They call each other Jackie Chan and Chris Tucker until Tony laughs us out of here. I’ve never sniffed glue before but I assume it’s like this.

Wait I thought we were getting Burchill vs. Hurricane? They did a promo last week about it and everything. Oh a pre-match video reveals it’s now next week, so fuck me for paying attention to a ten year old C-Show.

The crowd noise is weird, it sounds like they’re censoring pro-Burchill noises while he’s wrestling in front of his home country. Anyway Paul pounds away on Goldy for about a minute then locks in a body scissors after working so hard. Goldust recovers to make his comeback consisting of nothing but punches and kicks until Paul turns a bulldog into a launch, causing the crowd to erupt for the first actual move of the night. Hurricane runs out to distract Burchill by running around the ring and Goldust lands The Final Cut to steal a win.

Winner: Goldust (Not much Paul could do with an opponent as agile as The Angel Of The North.)

If you want to see the Zack Ryder vs. Shelton Benjamin rematch then you can…watch Superstars.

Backstage, Zack Ryder tells Rosa Mendes how much he likes her. As soon as she leaves we go inside his head where he visualises both of them holding hands and skipping (until she sees his match has been relegated to the D-Show and leaves him for someone higher up like Kung Fu Naki.)

William Regal talks to Alleged GM Tiffany about how great it’ll be when he wins the title tonight and Tiffany says he’ll like him if he’s champ…or not. This gets her THE WILLIE STARE. 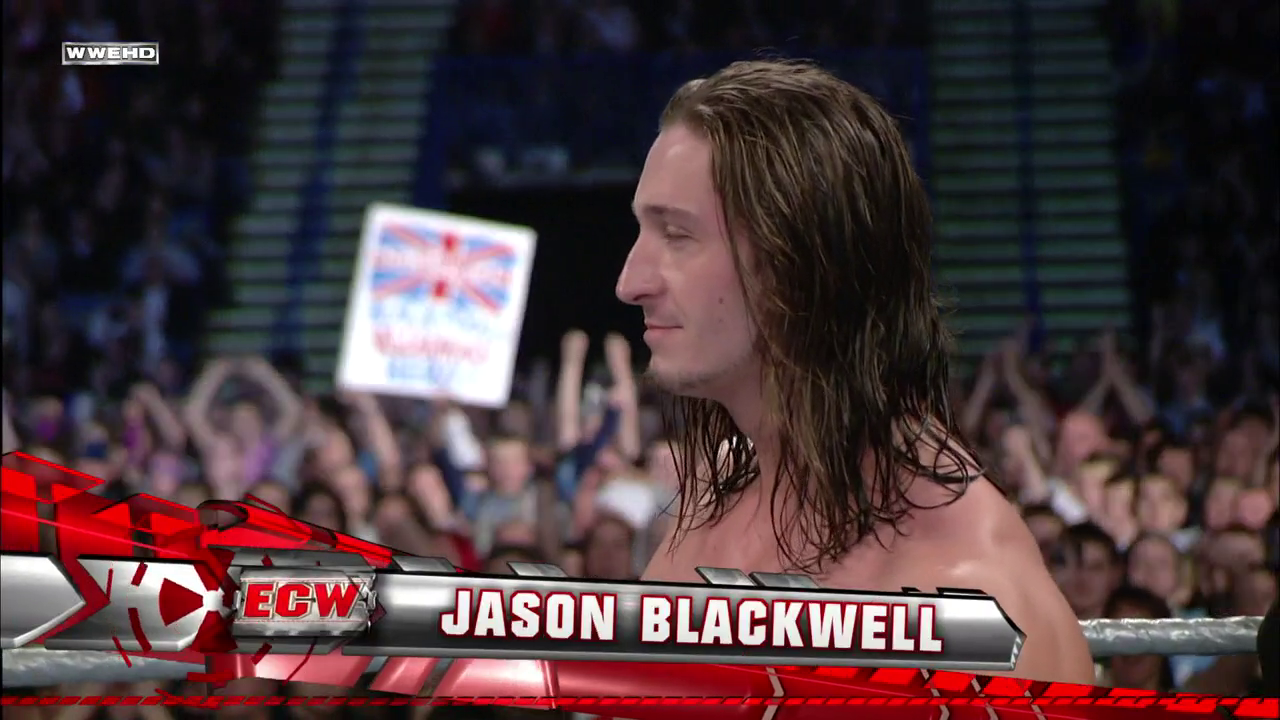 Blackwell is announced as hailing from Sheffield, England to a big pop so I had to google who the hell he was and it turns out he’s Jason Rotanda from Aberdeen. Oof. That’s worse than Iron Sheik pretending to be from Iraq.

Bryon talks about how Blackwell appreciates the film Braveheart and he must have a Brave Heart for taking this match.

Vance reads the “slam, slam, stare at hard camera hit finish” script that every big slug around this period has to stick to. Not sure how far he’s going to get with a Reverse DDT as a finish but Blackwell retired in 2011, presumably out of shame. 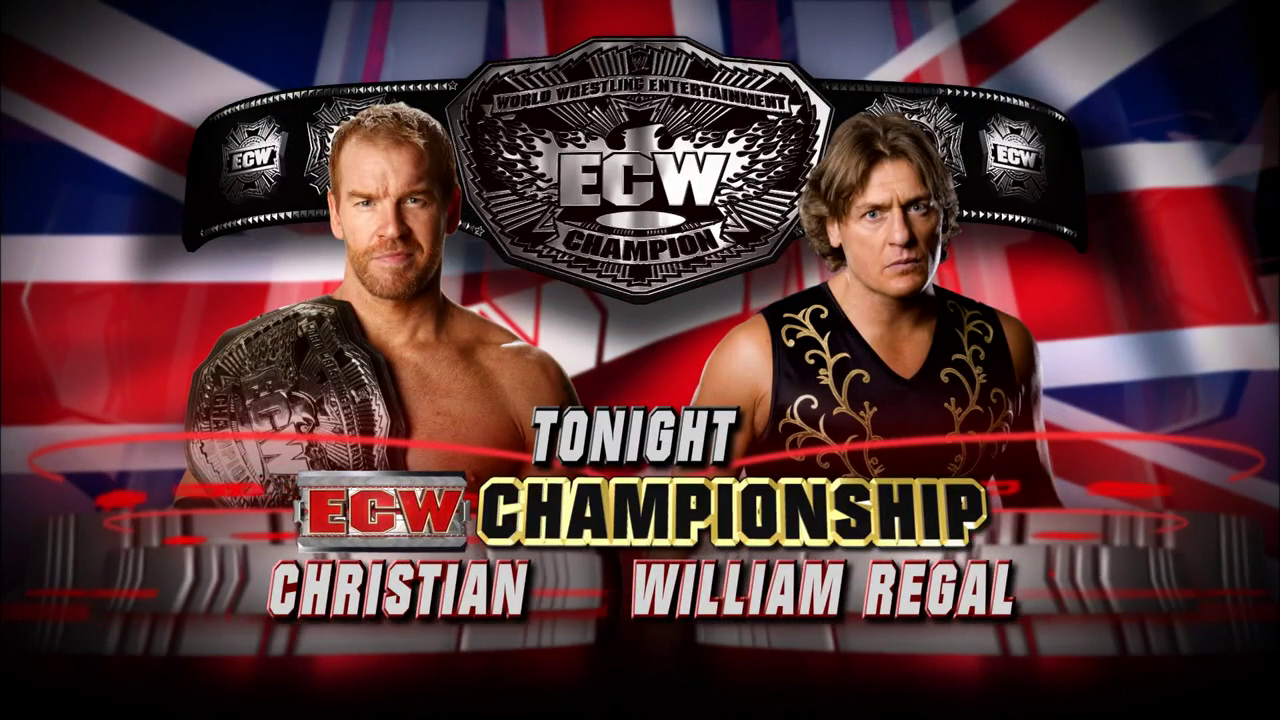 Rest of the show has been nothing but we’ve got fifteen fat minutes left with no Roundtable allowed at ringside so here goes. 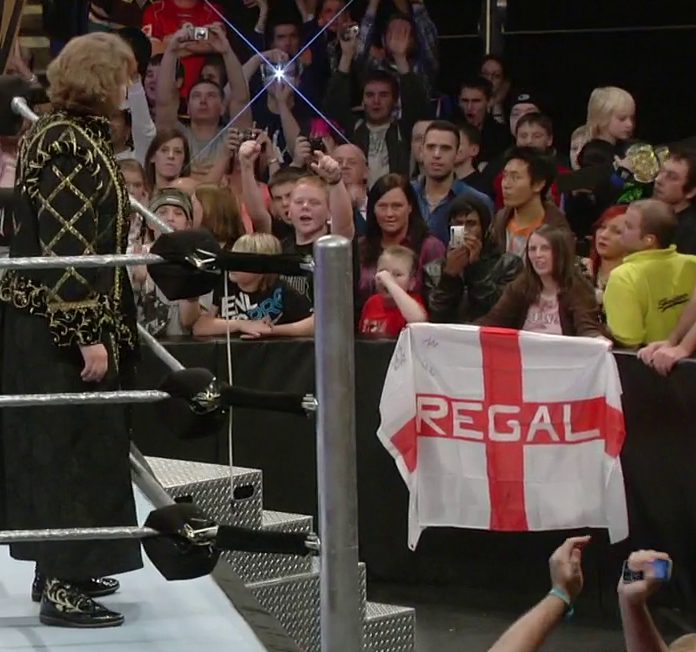 A hero’s welcome for Willie but sadly the pop for Christian is even bigger and a quick scan reveals plenty of crowd signs for him. Then again there’s signs for Jedward too. Regal and Christian stare off as the crowd is divided as we get a cruelly-timed advert break.

When we return, Christian is delivering a baseball slide to Regal as he’s attempting to enter the ring. He brings him in for a two-count and Christian remains on offence after some Lifters. Christian gets a two-count off a Reverse DDT (we’ll rename that the Fuck You Vance Archer) and Regal shrugs off a chinlock to Irish Whip Christian into the turnbuckles. So far neither man has kept the advantage for long and they keep striking each other when they get the chance. Top rope crossbody gets two for the champ and he follows with the rope-assisted foot stretch to a mixed bag of boos and yays. They exchange strikes on the top rope and the crowd are getting louder and louder with each twat. Double Underhook off the top only gets two as Regal landed badly too and struggles to get the pin BECAUSE HE’S THE KING and we get another break.

We return with Regal dodging the baseball slide and destroying Christian with an Exploder.

Christian kicks out so Willie peppers him with more European Uppercuts. Christian tries to dive off the top again but Regal yanks him off and alternates between arm-stretches and pin-attempts to tire him out because he’s the best. Every time I watch a Regal match I wonder why no-one’s stolen his entire moveset. Christian tries the Sunset Flip so Regal sits down like Davey Boy and grabs the ropes for one…two…thr-HEY GET OFF THE ROPES REGAL. The timing on that was perfect and you can hear the crowd cursing at the ref as it was that close. As Willie howls, Christian takes this opportunity to roll him up for another close two. William The Bastard suplexes Christian so hard he bounces THEN sells.

It only gets two but Regal’s panting and sweating now. It’s a good look for him. A Full Nelson stretches the champ as the crowd start clapping which enables Christian to soak up some shots so he can land The Killswitch out of nowhere. He’s knackered from all the shots so by the time he tries for a pin, Regal kicks out. That’s a rarity for that move and the commentators are shocked. Regal kicks Christian while both men are half-down then tries a schoolboy with all his weight on Christian for two. Christian goes up but he sinks like the Belgrano after Willie shoves him off. Christian gets fired up from this and strikes Willie away so he can connect with two Missile Dropkicks. It still only gets two and Regal ignores them both to twat Christian hard for two. Willie charges up his knee for the Trembler but Christian dodges it, so Regal simply strikes him again for two. Oooo it’s getting tense now lads.

Christian recovers and nearly gets The Killswitch but Regal takes him down and into the Regal Stretch as he turns him around. Willie syncs it in and even waits for Christian to extend his arm to the ropes before grabbing it and pulling it away. However this leaves Willie open for elbows causing him to release the hold and run into a quick dropkick. Christian goes up top yet again but manages to nail a flying elbow setting up The Killswitch but Regal pushes him off and plants him with another Exploder. Crowd’s throbbing. Christian side-steps the Trembler and uses Willie’s momentum to finally land The Killswitch again to finally end it.

Winner and still ECW Champion: Christian (One of the best matches in the three year history of the brand. Both men had a tight-arse match with very minimal resting and Regal got to show off every little trick he’d learned while Christian didn’t mind getting suplexed. Coupled with a crowd hot for both men and you’ve got the best thing to happen to this brand since Yoshi Tatu’s theme song.

Overall: Watch the main event and fuck the rest of the show.

I’ve been Maffew, go watch Botchamania 408 and leave me alone.