It’s been a while since I did one of these, due to the festive period and my complete lack of interest in the brand now there’s less than twenty shows left. It’s like getting attached to the villagers in Majora’s Mask.

We start with The Abraham Washington Show and the guest is supposed-GM Tiffany. I can’t believe I’ve avoided this show. Abraham brings up the lack of ECW representation at last Sunday’s Bragging Rights. She answers like a politician and points out SD & Raw wrestlers Morrison & Kingston got their starts in ECW and promises the brand will be properly represented at next year’s Bragging Rights. (voiceover: they wouldn’t.)

Abe then brings up Sheamus leaving for Raw, which came out of nowhere. Tiffany states Sheamus has one last ECW match with Shelton Benjamin tonight so they can resolve their feud. It’s not like Sheamus would achieve anything noteworthy in the next month anyway. William Regal shows up to demand another ECW Title shot but Tiffany denies him and she walks off triumphantly, her power strut somewhat marred by her theme song yelling about how badly she needs a fuck.

Not the usual car crash we get from the show and I like Tiffany’s new gimmick of Iraqi Minister Of Information, coming out every week and claiming everything is fine and actually Smackdown is the post-show for ECW.

We get a surprising debut that I’d forgotten about: Byron Saxton replacing Matt Striker (who was moved to Smackdown while Jim Ross took time off after another Bell’s Palsy attack) and God is he full of youthful enthusiasm. 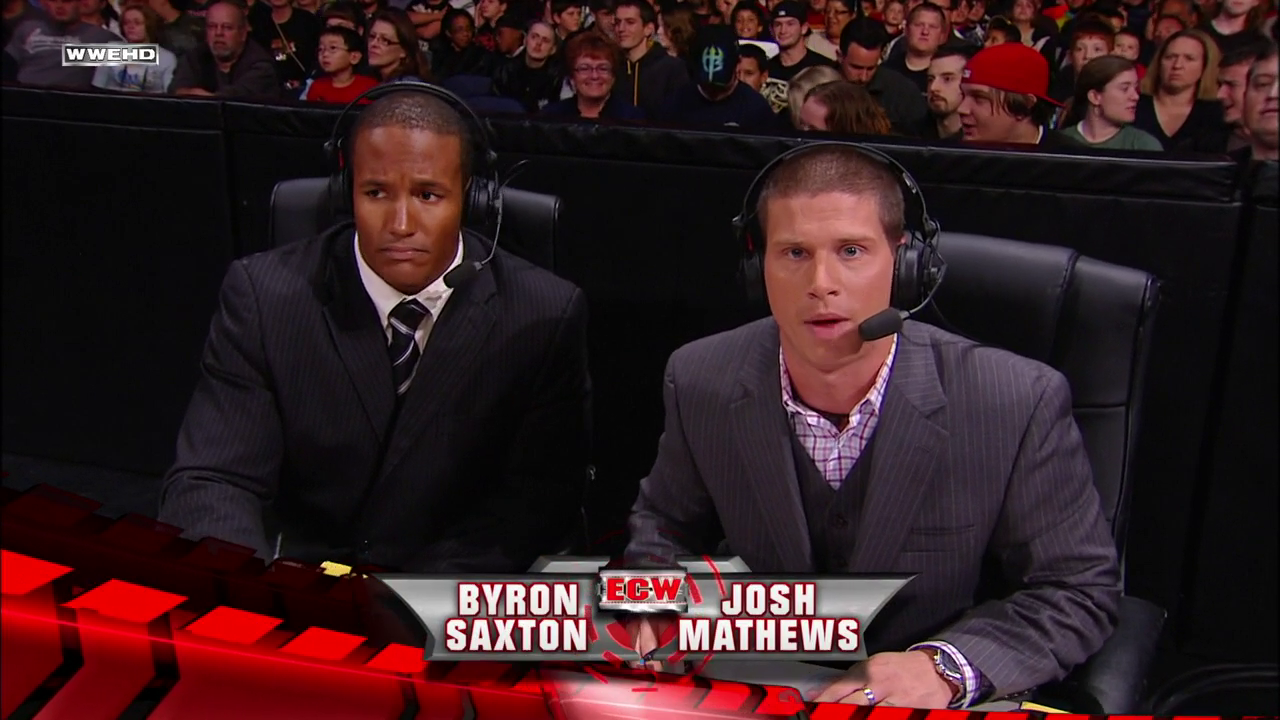 Let’s see if it lasts.

Absolutely no pop for Sheamus. No love, no hate, nothing. People joke about Sheamus’ gym friendship with HHH but I’d like to hear any other explanation as to how he went from painfully green to Wait Wait He Beat Who For What in no time at all. Anyway, these two are feuding because Sheamus mocked Shelton for being in WWE for years and not winning a World Title. Oh that line will sting way worse in a few weeks. Shelton rides the pale hoss to start off and lands a snug springboard moonsault right onto Sheamus’ face.

After the break and some fresh corpse paint, Sheamus is chinlocking the hope out of Shelton and acting surprised when a knee drop doesn’t end the match. Byron gets the “Shelton is one of the best pure athletes” line so he’s already learning the tricks of the trade. After three mighty chinlocks, Shelton escapes and lands the second rope crossbody and Stinger Splash but falls victim to a snake eyes and a Pump Kick out of nowhere to end it as undramatically as possible.

Winner: Sheamus (I’d say Sheamus was half-arsing it like House Show Bret but this is simply as good as he was right now.)

Rosa Mendes talks about shopping and dresses with Gregory Helms until The Burchills demand to see Hurricane next week. Good for Rosa for putting on a happy face despite getting drafted to a brand with no women’s division.

Christian says nice things about Yoshi Tatsu and says he’s happy to have taught him so much…but tonight he’s going to teach him a new lesson: defeat. Ooooo. 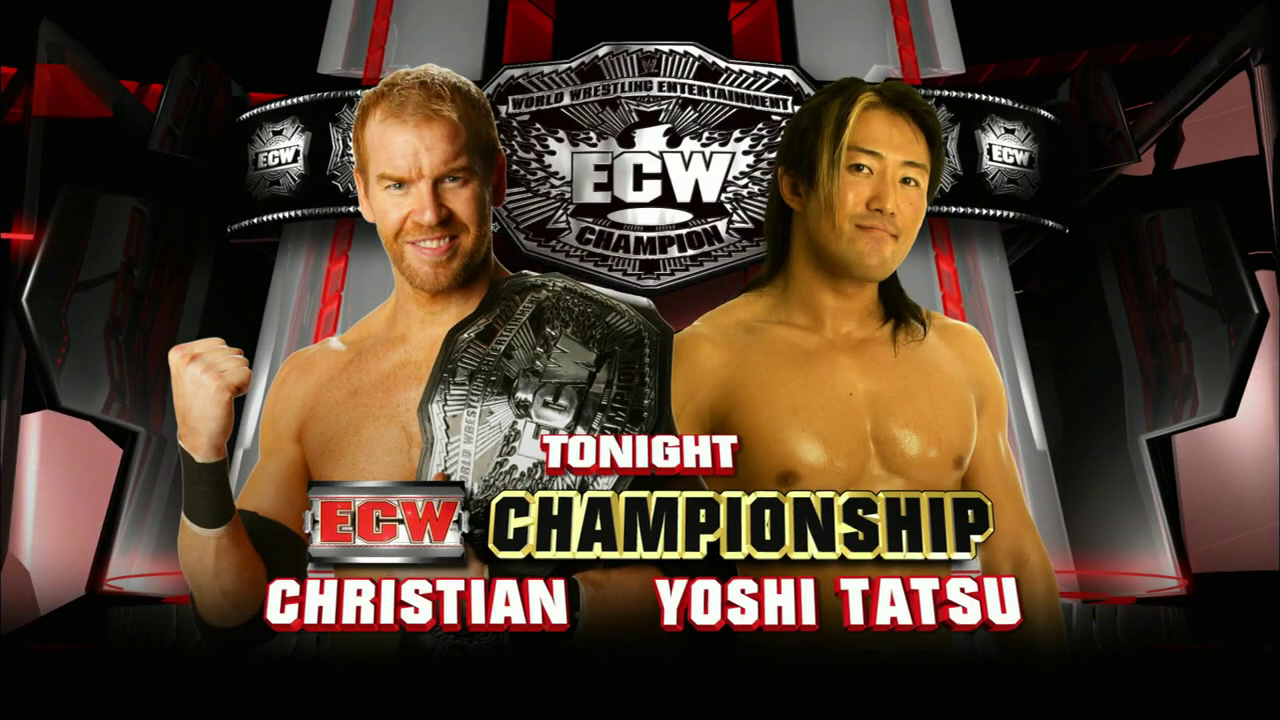 Yoshi earned this by defeating Zack Ryder last week and by being over as fuck and having a nice theme song and SPEAKING OF WHICH: 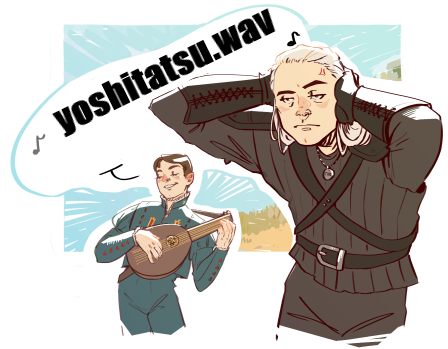 The crowd support is evenly split but it sounds like only the kids are making any noise so all those adults in the crowd must be bored parents wondering when Hulk Hogan is going to show up. Long feeling out process as the rest of the show has been Bragging Rights recap and we’ve got to fill it out somehow. Christian gets the Sunset Flip off the second ropes early but Yoshi kicks out and delivers a running senton for two. Christian tries to send Yoshi outside but he holds onto the ropes and rolls up Christian for a two-count and this match got serious quickly. Oh wait there’s the advert break so let’s calm down everyone.

Yoshi sends Christian off the turnbuckle to the outside with a well-placed dropkick but he misses the dive so Christian runs in and splats with the second rope crossbody. Nice sequence. Yoshi shrugs it off and gets another quick two-count from a running crossbody. Yoshi is doing a great job of teasing a title change every few seconds. Christian tries the tornado DDT but he gets shoved off allowing Yoshi to nail the top-rope spinning heel kick and the kids are going nuts but Christian kicks out. Yoshi lands the kicks that hit so hard Sheamus returned his blender before landing the Rolling Elbow…for two. Even the adults have woken up now as Christian connects with a top-rope dropkick but thinks “sod it, I’ll do another one” allowing Yoshi to roll him up with a Jack-knife pin for 2.9999 and the suddenly gruff “ooohhh” from the crowd makes me smile. Yoshi misses another kick which Christian converts into a Reverse DDT for two. Dodgy sunset flip gets spun into a basement kick onto Christian for ANOTHER two-count and where has this Yoshi Tatsu been for the past ten years? Christian gets a flying elbow which finally lets him get The Killswitch to end it.

Winner and still ECW Champion: Christian (Crowd went from not caring to being on the edge of their seats to giving both men a standing ovation. Well done to both guys, in particular Yoshi who had future star written all over him (not like Hakushi) and if there was ever a time for a title change it was here.)

Post-match, Regal’s Roundtable beat up both men to end the show on a high. 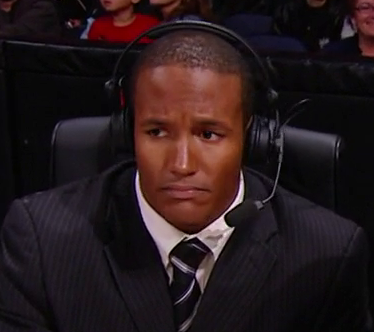 Overall: I lied at the start, it turns out there’s still life in this show. Of course, a lot of that comes from seeing which wrestlers manage to get to the lifeboats first but Tatsu vs. Christian was great and Byron is a major improvement over Striker’s random nick-name generator and I think he should continue this line of work.