Right now this show is colder than Labour’s approval levels so let’s recap the relevant news from Powerslam Magazine #184:
– Eugene was released from his contract (he’d re-signed with the company a month ago) due to a perceived “lack of effort” which was believed to translate to “being fat.”

– Gail Kim is recovering from a ruptured breast implant, Undertaker is having troubles with his hip and DiBiase Jr. has a serious eye infection.

– Umaga re-opened negotiations with WWE with “needing to pass a drug test” being a strong condition for re-signing. Speaking of which, the just-released Jeff Hardy is due in court on November 4th in connection to his arrest for drug trafficking and possession (Jeff had so much drugs with him that they got him for possession, despite many wrestlers defending him by saying “he just like drugs.”)

– Kurt Angle was cleared of harassment and other charges of Rhaka Khan due to insufficient evidence. God I’d forgotten about that crazy story, stemming from Angle (allegedly) following Rhaka from a Starbucks in his car. The police found steroids and syringes in his vehicle but that was cleared once he provided a doctor’s note for them.

– Jim Cornette and B.G. James were fired from TNA for not endorsing Vince Russo. Cornette would show up at ROH’s NYC show to kick-start an interesting run with the company. Also at said show, Danielson & McGuinness had their last match against each other and for the company as they signed with WWE & TNA respectively.

– Highspots announced they’re auctioning off Ric Flair’s NWA World Title he gave them as security for a loan they gave him (which he was unable to repay, obviously).

There, some juicy context for an otherwise uninteresting show to read about. And to prove my point, we start with Abraham Washington who announces he is hosting the show tonight. But while I’m reaching for the bonjela CHRIS JERICHO of all people interrupts to look for the GM.

We go to the ring where ring announcer Lauren Mayhew gets chryon for some reason. 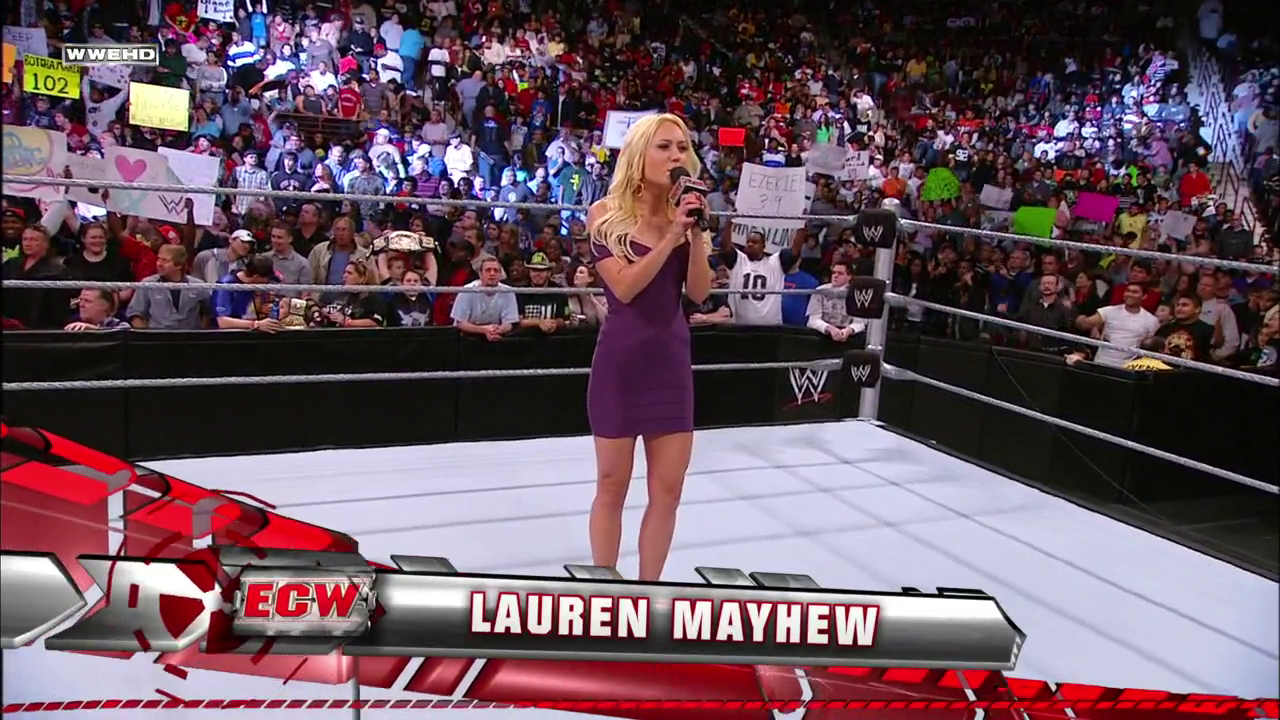 A quick google search reveals she makes it all the way to November before being released and because she walked the King’s Road she has a wikipedia page. 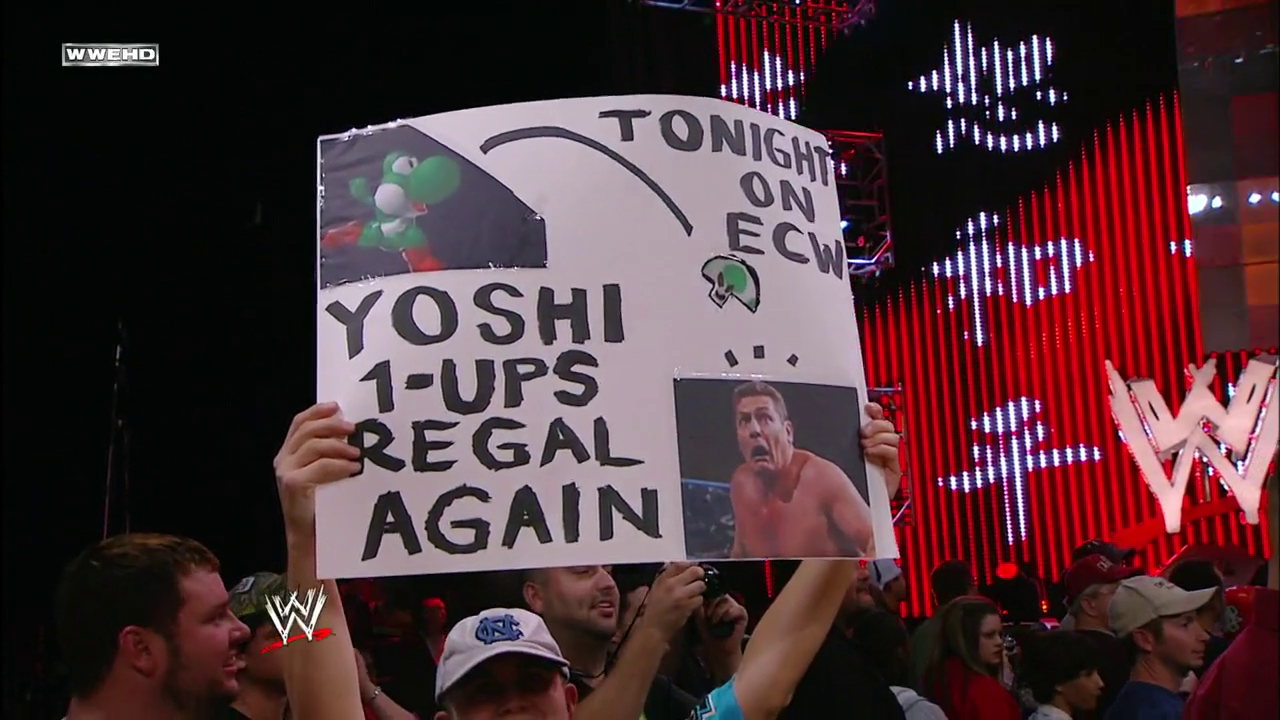 Crowd loves Yoshi who feeds off their energy to deliver Japanese Armdrags and dropkicks. Meanwhile Zack gets fuck-all and has to launch Yoshi to the outside to get the advantage. Crowd disapproves of Ryder’s hard-hitting stomps and scoop slams but he’s able to turn a body scissors into a jacknife pin with Ryder doing all the work for two. Yoshi follows with half-speed kicks and you wonder if Regal took him to one side and told him to bloody well calm down as they look tame compared to previous weeks. Yoshi & Ryder are both up on a Superplex position but somehow they fall off in very unconvincing fashion and splat on the outside to take us to break.

Yoshi escapes the Returning From Break Submission with “Antonio Inoki esque kicks.” Inoki in 2009, maybe. Yoshi continues his “Neon Genesis” (kill me now) with a series of pin attempts with Ryder kicking out of them all. Yoshi ends up outside but kicks Ryder in the face and follows with a vaulting splash to win it.

Winner & #1 Contender: Yoshi Tatsu (If only the wrestlers enjoyed wrestling Yoshi as much as the fans enjoyed chanting his name. Clunky match with Yoshi looking full of doubt now he can’t go hard (all day and night) with his kicks.)

Backstage ECW GM Whatsherface talks to Whatshername until Jericho interrupts. He’s the Team Captain of Smackdown and is looking to see if anyone is “worthy” of being part of his team. Whatsherface rejects this generous offer but lets Jericho stay to watch the show if he wants. Why was TIFFANY (I remembered) overshadowing Jericho of all people?

Regal is furious that “oxygen thief” Yoshi would get a title shot before him but Jericho shows up to try to tempt The Ruthless Roundtable into joining him. Tiffany shows up and belittles Jericho for the second segment in a row and books Jericho vs. Christian tonight. 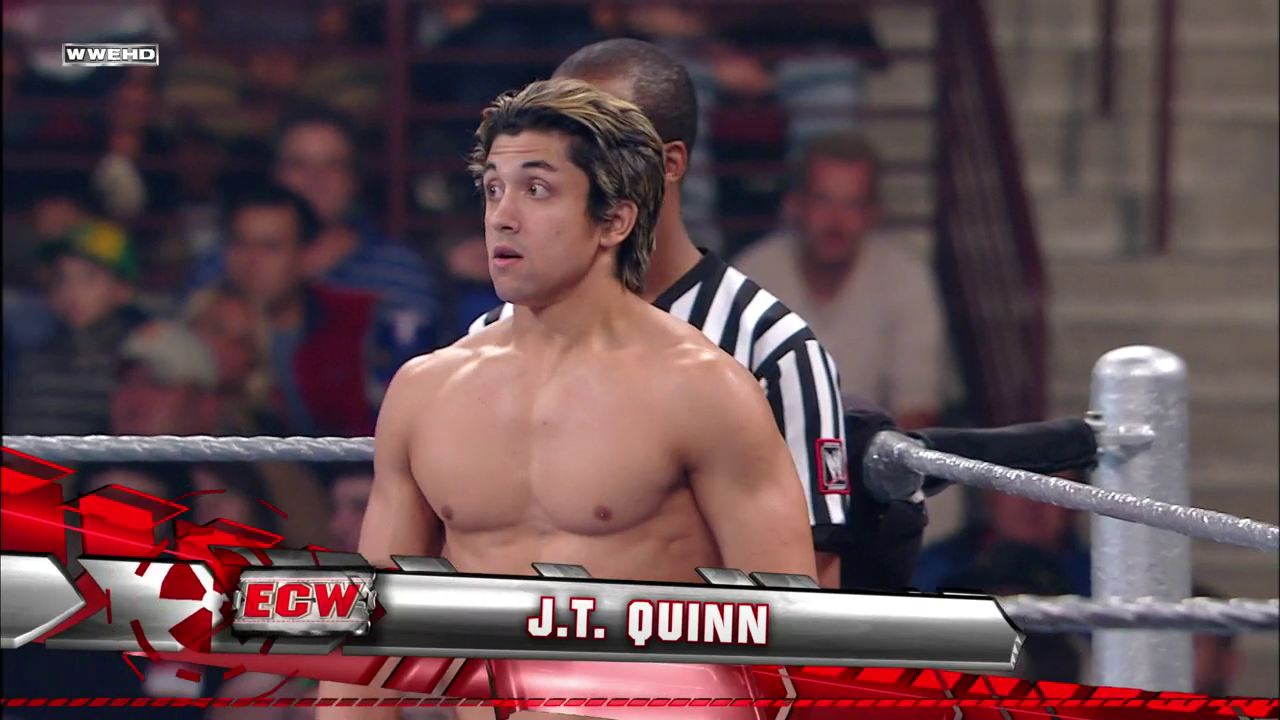 Hey it’s TJP! Sheamus keeps on spamming big moves on the future Cruiserweight Champ but continues stopping the pin himself until Shelton Benjamin charges in to beat the piss out of Sheamus. Shelton annihilates him with a German Suplex to make Sheamus run off and the crowd loved this heated pasting.

Bragging Rights is this Sunday! Cena vs. Orton in an Iron Man match! Undertaker vs. CM Punk vs. Rey Mysterio vs. Batista! Team Raw vs. Team Smackdown! And absolutely no ECW!

Paul Burchill and his just-a-friend Sister walk to the ring to continue the Hurricane feud. He demands Hurricane march out, remove his mask and reveal he is in fact GREGORY HELMS IN DISGUISE. So Hurricane’s music plays, the man walks out and takes off his mask to reveal….some guy. 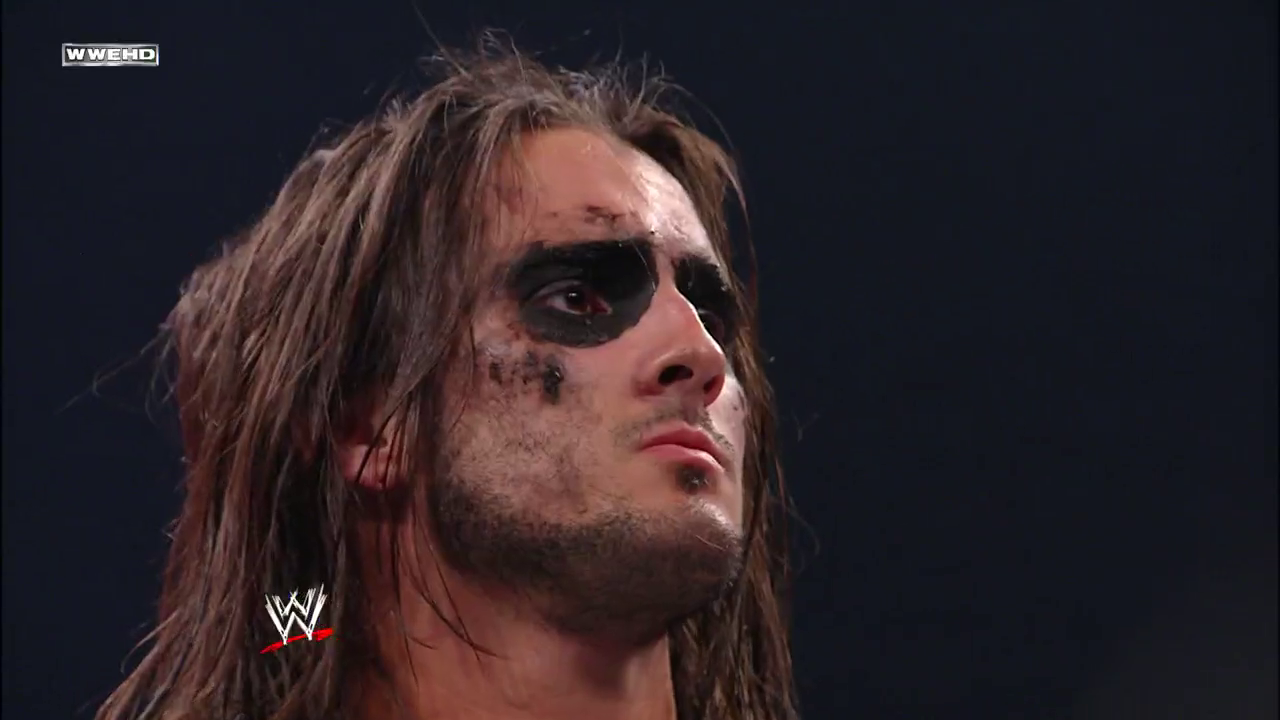 Burchill realises there’s hurri-chicanery going on and dumps nWo Gregory but not before the real one attacks with his hurri-cane and sends Burchill running. I enjoyed Burchill realising something was wrong straight away, if this had happened to Shorty G he’d be backstage wondering how Hurricane cloned himself so quickly. 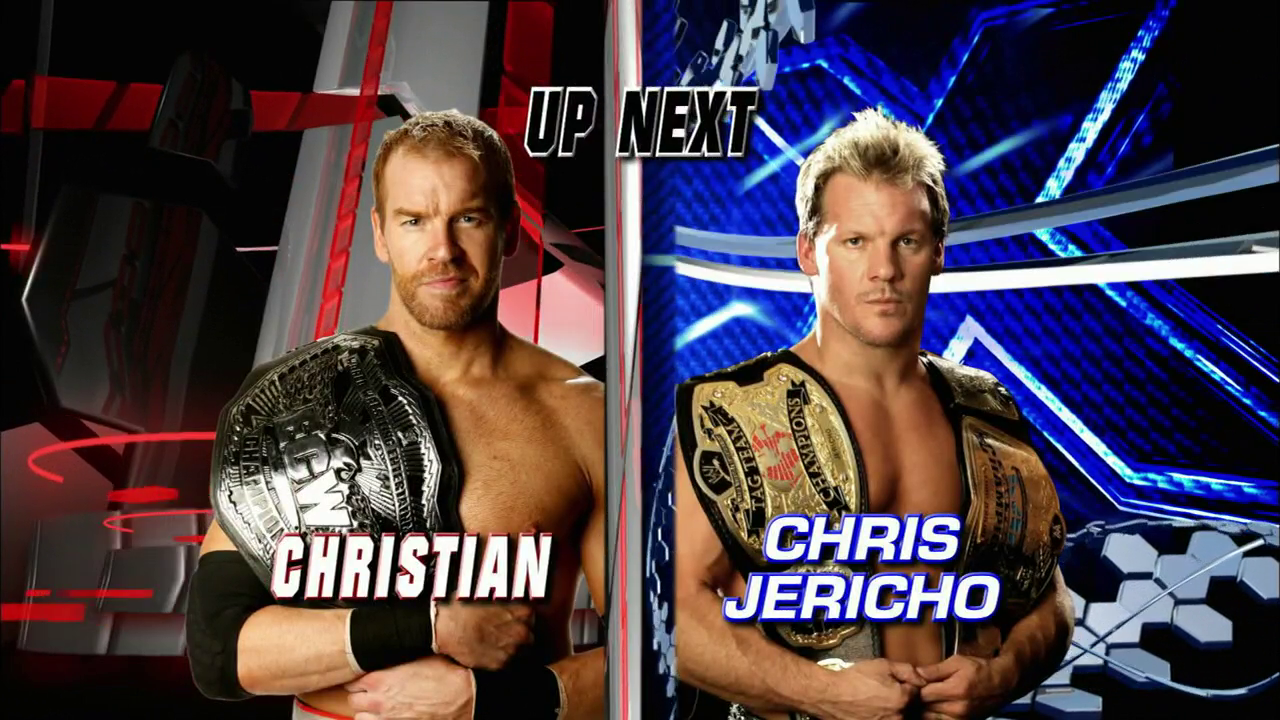 The ring announcing sounds pre-recorded so no wonder wiki woman only lasted a month. Jericho is still Double Tag Team Champion with Big Show as well as carrying this stupid PPV concept that lasted all of two years. The opening exchanges get little reaction but Jericho yelling at the ref gets a giant BOOOOO from the kids. Jericho would have made a killing doing the Butlins circuit. Jericho gets tossed into the outside while trying for a Lionsault and we get a dropkick through the ropes to send us to break-land.

Christian continues his assault of his former tag partner until Jericho backdrops him outside as Christian is contractually obligated to take that bump once a week. Jericho smothers Captain Charisma with his lobster tan with the crowd more interested in booing Jericho than cheering Christian. Jericho misses the Lionsault and gets rode in the ropes like Seabiscuit to make up for it. Jericho attempts the Walls but Christian counters to a Small Package for a near-fall as the crowd heats up. Facebuster gets converted into a Reverse DDT but it only gets two (two and a half in Canada). Jericho slingshots Christian onto the ropes but he turns it into his Sunset Flip which gets turned into the Walls Of Jericho. Christian struggles for the ropes as the crowd goes BANANA and there’s audible boos when he reaches them and Jericho has to release. Jericho gets crotched while attempting to splat Christian and walks right into the Killswitch to end it.

Winner: Christian (Right now a house show level match between these two veterans is more than enough to tickle the ECW crowd’s fancy, so they didn’t do much because they didn’t have to.)

Overall: Loud crowd, guest appearance from Jericho and YOSHIMANIA are enough for a solid episode of ECW on Sci-Fi. If you were wondering, Christian defeated Paul Burchill in the dark match for this Sunday’s Bragging Rights which shows how important the brand is to WWE right now.

I’ve been Maffew and I recommend Top Boy on Netflix.