We’re in Long Island, NY and we’re starting off soft with The Abraham Washington Show. Thankfully they’ve figured out what was missing from the joke and added some 1993 WCW. 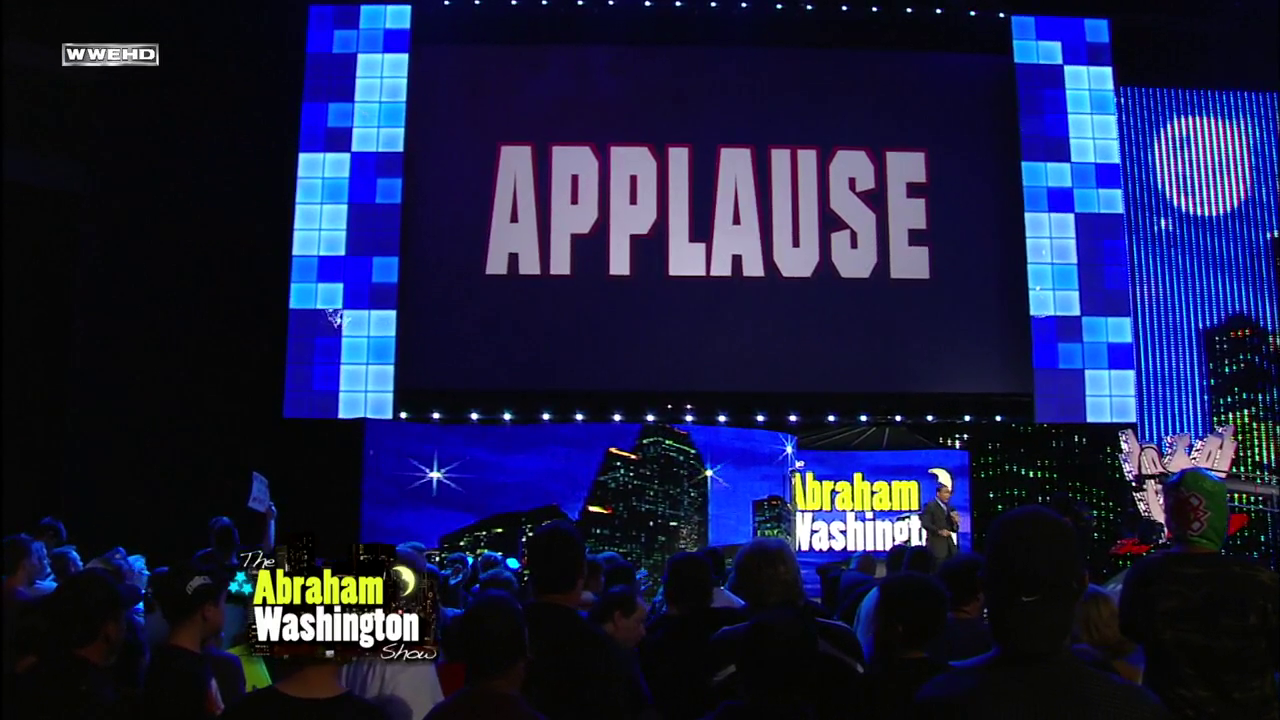 Washington sends an invitation to Sarah Palin to remind everyone it’s 2009. Long Island native Zack Ryder interrupts to a hero’s welcome with the crowd even joining in on the “Wooo Wooo Wooo.” Abraham & Zack bond over mocking Shelton (“Ain’t nothing stopping me…falling asleep watching his matches!”) until he shows up. He doesn’t want to swear so he’ll “speak Smurf” and tells them to go “Smurf themselves.” I guess it makes sense, if Vince did hire Smurfs he’d still call all of them Shelton. The Smurf bit dies like Smurfs 2 did at the Box Office so Abraham actually gets a pop calling him a “Dennis Rodman knockoff” and this goes on and on and on until a brawl breaks out and we’ll get a match next week. 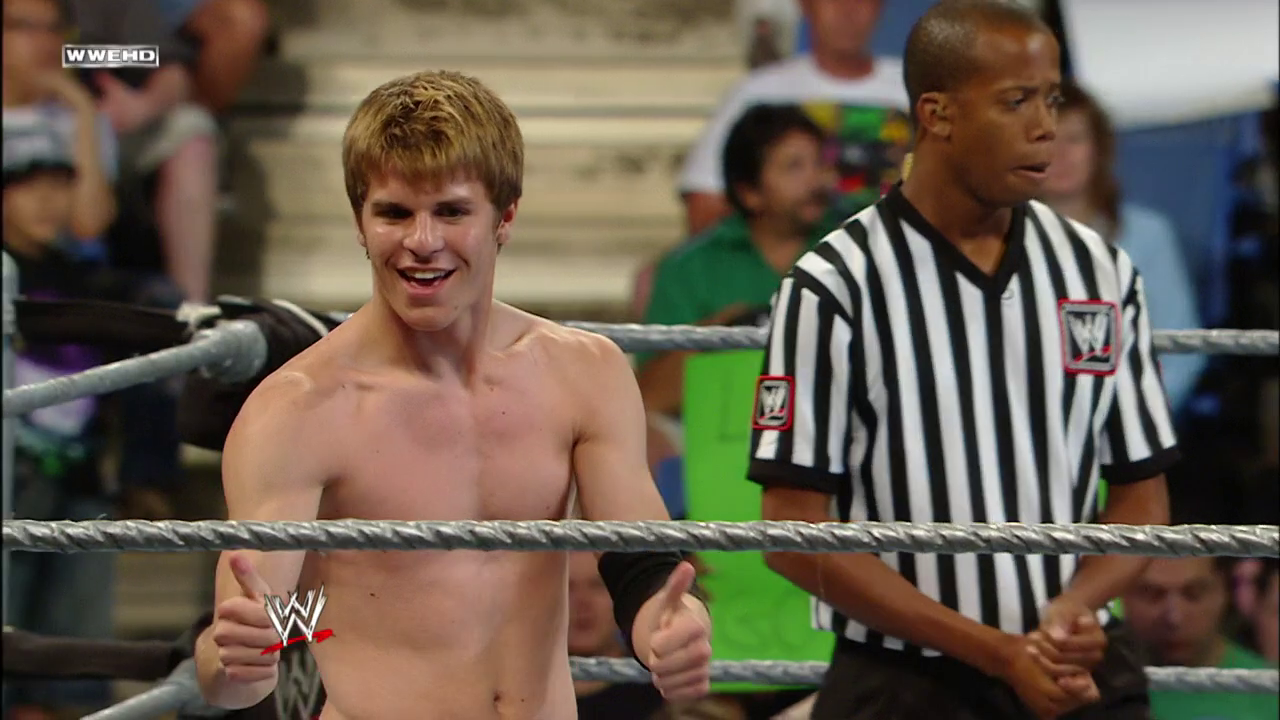 Danger is a local guy who would end wrestling in Beyond as part of (and I quote) The Incomparable Dickhead Brigade. Quick squash.

BUT THEN Kozlov shows up to plant Danger with the Iron Curtain. Zeke stares at him before delivering another Uranage to the deceased jobber then leaves. I’m enjoying this masculine battle of treating jobbers like they’re weights at the gym.

Backstage, Tiffany is talking to a tech monkey when a large box of equipment very slowly heads her way BUT LUCKILY The Hurricane is there to stop it and save the day! Burchill looks right at the camera and tells us “this is ridiculous.” Oh man if the twist is Hurricane is setting these up himself then I’ll not call Burchill a Sister Fucker for a week.

Last week’s match was such a carry job by Goldust he probably requested a rematch so he could save time at the gym and do Pull Day in the ring. Sheamus dominates with basic stuff he can’t flub and works over the left arm the whole match with Goldust using the power of crowd support and fading paint to mount a comeback. Then Sheamus yeets him off the top rope and pins him just like that.

Sheamus starts bragging on the mic so Goldust attacks him which means THE FEUD MUST CONTINUE ahhh.

SMACKDOWN REBOUND: Champion Jeff Hardy defended his title against John Morrison and I forgot how good the 2009 main event scene was on the Blue Brand. After eventually putting away JoMo, Punk interrupts as insincerely as possible to beat down Jeff in the feud that made him a main eventer. 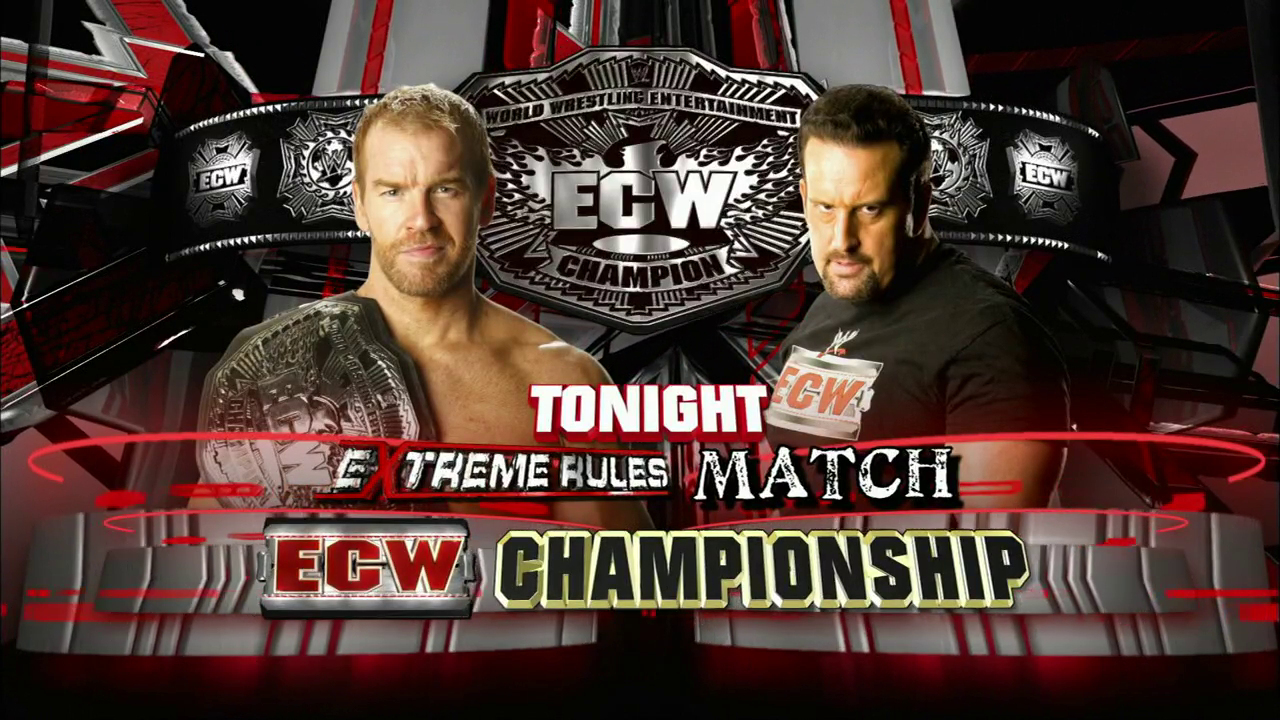 Dreamer shows up with a Hot Dog cart because he’s fat, Christian shows up with a car door because he’s er…Canadian. The dangers of having an Extreme Rules with all the props already around the ring means the crowd doesn’t care about the opening few minutes of wrestling so they go straight to the plunder. Dreamer gets a Singapore cane but Christian defends himself with a trash-can lid until Dreamer delivers the White Russian Leg Sweep on the outside with former Raw legend The Sandman getting no love from the commentators. Christian dropkicks Dreamer as he tries to squeeze into the ring and follows with a crossbody over the ropes. Christian gets a Black Russian Leg Sweep (it’s a White Russian with a Cane and a Black Russian with a crutch) but runs into the Hot Dog cart.

Dreamer forces Hot Dogs into Christian like he’s Takeru Kobayashi until we go to break and despite this show being pre-taped, they decide this is the best thing to show as we come back from commercials:

Christian recovers to twat Tommy with the trash-lid for two and the match slows down enough for me to realise The Hart Dynasty got drafted to Smackdown a few months ago so I should probably remove them from the tags. Christian takes a backdrop on the outside because he loved taking that bump. He recovers to deliver a springboard dropkick off the guard-rail to a bin-wielding Dreamer. Christian gets launched into the trash-can in the corner and the momentum keeps him going out the ring like a slinky in a great-looking spot. Dreamer gets a close two from a cane-assisted Pump Handle slam but Christian comes back with a big bin to the head as this has turned into “you do a move then I do a move.” Dreamer counters a tornado DDT into a slam on the bins (which is an old Mike Awesome vs. Masato Tanaka spot) but after loads more bin offence that sounds boring when typed up, Christian nails the Killswitch on the car door to retain the title.

Winner and still ECW Champion: Christian (Like most Extreme Rules matches it was one spot followed by another but still: they busted their arses off here even if the crowd was more excited for the bins then the wrestlers. But it’s hard to not recommend a match featuring a fucking car door.)

Overall: The show is all over the place but with Abraham bombing at the start of the show and Dreamer wrestling with a Hot Dog cart at the end, at least it’s not dull.

I’ve been Maffew and you can also enjoy the newest Botchamania right here and listen to me and the other Cultaholic lads on the Podcast Acast site.

If that doesn’t tickle your fancy then I’ll leave you with this sign someone brought to this show. 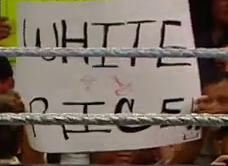