The Harts try to distract Bourne right in front of the ref so they get thrown out and Bourne follows Kidd with a dive to the outside. Kidd figures out that Bourne’s old DDP ribs may be his weak-spot and he begins to stretch him like new DDP. Crowd gets behind Bourne without prompting which is a good sign, maybe Henry should kill him every week. Bourne lands Delirious’ Shadows Over Hell but his ribs hurt too much to capitalise so we get a fast & fun sequence of kicks and counters making the crowd go BANANA before Bourne ends with his beautiful Shooting Star Press.

Winner: Evan Bourne (Kidd shouldn’t be losing this easily while also wrestling Christian in main events but we got a fast-paced match out of this so who cares.)

Last week Finlay turned heel on everybody and he’s…still using the fucking Hornswoggle theme instead of the mean MY NAME IS FINLAY one. Wait, he’s high-fiving kids on the way to the ring what’s going on. Finlay explains he was caught in the middle of a Dreamer & Christian brawl and got his eye injured and wasn’t impressed when neither of them contacted him afterwards and Zack Ryder interrupts before he can finish expositioning.

Fit pounds away on Ryder before they do the Arn Anderson “get whipped into the corner, turn around and collide heads” spot which did worse for wrestling than Harley Race’s diving headbutt because only Arn could make it not look like The Three Stooges. Finlay sells his injured eye allowing Ryder to utilise his offence of chinlock and chinlock. Finlay remembers he has two eyes and makes a comeback and while Ryder attempts to remove the turnbuckle pad and distract the ref, Finlay rolls him up in a finish that made such little sense Striker had to make up a whole backstory behind it to cover for them.

Winner: Finlay (So the story is Finlay went twat-mad last week but he’s not a bad guy. It’s OK, it’s not like there’s a slot open for a new bad guy at the top of the card or anything.)

RAW REBOUND: Last night’s no-advert special apparently had the highest viewership of any Raw episode in the last seven years so HHH vs. Orton ended in a draw to make sure it didn’t happen again. Raw GM Donald Trump announces everyone in attendance gets their ticket refunded (yayyy) then announces there’ll be a Guest Raw GM every week (OH FUCK OH FUCK NOOoo). Vince then demands to buy Raw back from Trump before he kills his company and Trump reveals that was the plan all along and makes like Mr. Burns and sells it for twice what he bought it. He slaps Vince and then gets elected President. Anyway, Vince announces Orton vs. HHH, Three Stages Of Hell at The Bash which happened but I don’t remember a thing about.

Oh and we’re also getting The Miz vs. John Cena for the first time, when everyone was hoping they’d get elevated Miz because he was a blast calling out Cena every week and announcing he’d just beaten Cena via count-out as he didn’t show up. Then Cena annihilated him and we had to wait two years for Miz to happen for real.

Matt Striker is in the ring to explain this Sunday’s Championship Scramble match rules that everyone but the WWE commentators understood. 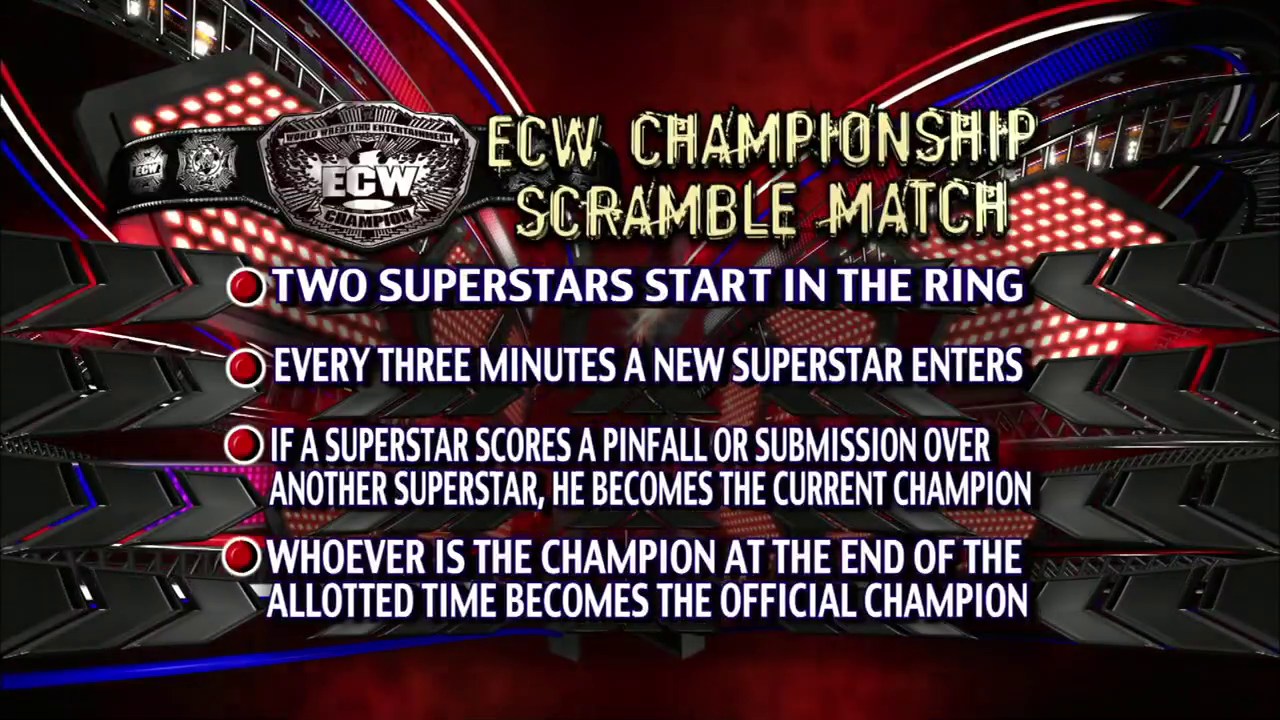 Then we go backstage to Gregory Helms interviewing Mark Henry when a large box falls on some random guy in the background, so The Hurricane appears to save the day then goes off-camera and Gregory resumes interviewing. Alright that was funny. 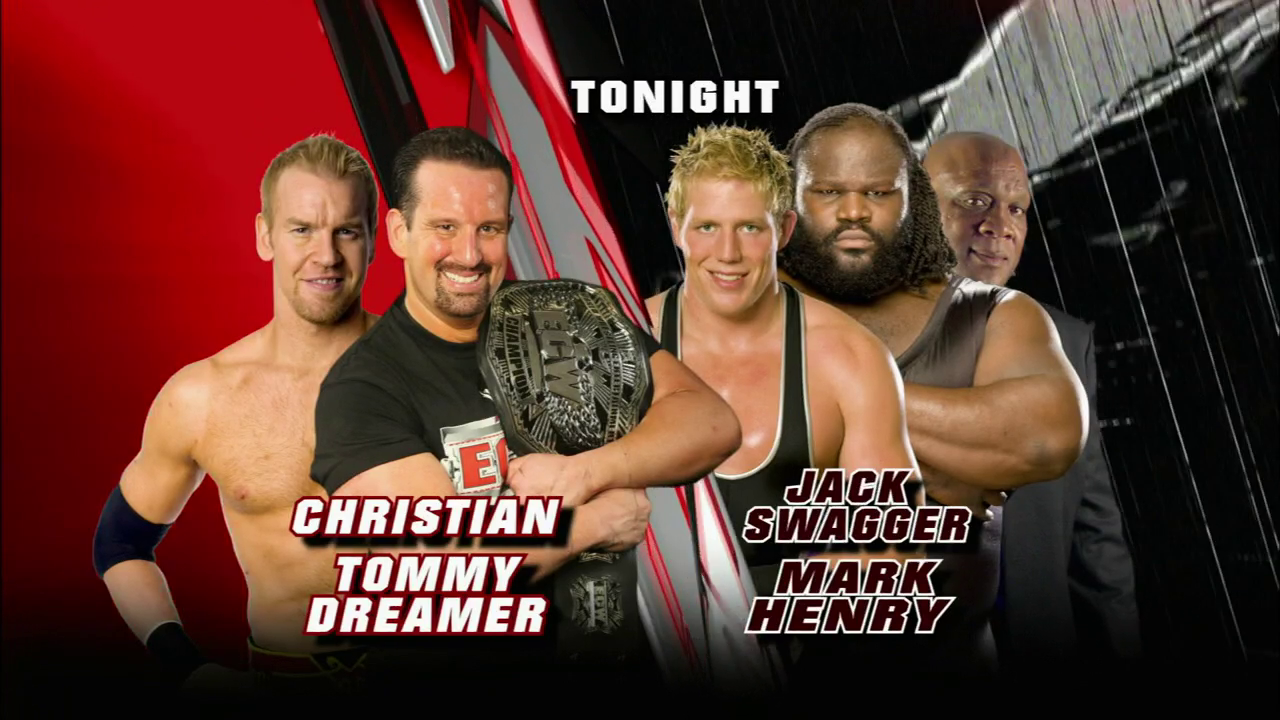 All four of these men will be in the Championship Scramble which only just got mentioned for the first time two minutes ago. Christian and Swagger go at it yet again but I’m bored of that so I’ll start typing when Dreamer and Henry tag in. OK here we go, Dreamer gets the immediate advantage and manages to dunk Henry out the ring and follows with the Rolling Slice Of Deep Pan Pizza off the apron to take us to break.

When we return, Christian is doing stuff with Swagger but it doesn’t matter as Dreamer tags in and is a House Of Pancakes on fire despite it not being the hot tag and annihilates Swagger and Henry. Man that ECW Title was everything his mid-life crisis needed. He lands the E-gasp-C-wheeze-W-dead Tree Of Woe but this allows Henry to knock him down while the ref’s distracted. Dreamer gets worked over like sour dough until he makes the very quiet tag to Christian who attempts a sunset flip on Henry. However, while Henry’s grabbing the ropes Swagger gets the blind tag and tries to sneak attack Christian…and I thought that’d be the end because it was cool but instead Christian counters to the Killswitch but Tony Atlas puts Swagger’s leg under the ropes so Dreamer dives onto Tony to shut him up. While that’s happening, Henry squishes Christian against the ring post leaving Swagger open to Doctor Bomb him for the win.

Winners: The Baddies (Like a lot of ECW On Sci-Fi main events, this started off dull but had a hot Rube Goldberg finish. Also credit to Dreamer for wrestling like he had the back of a 50 year old.)

Post-match, Henry splashes Dreamer and crushes Swagger so don’t forget there’s a Scramble this Sunday! Impossible to forget when they didn’t announce it in the first place. 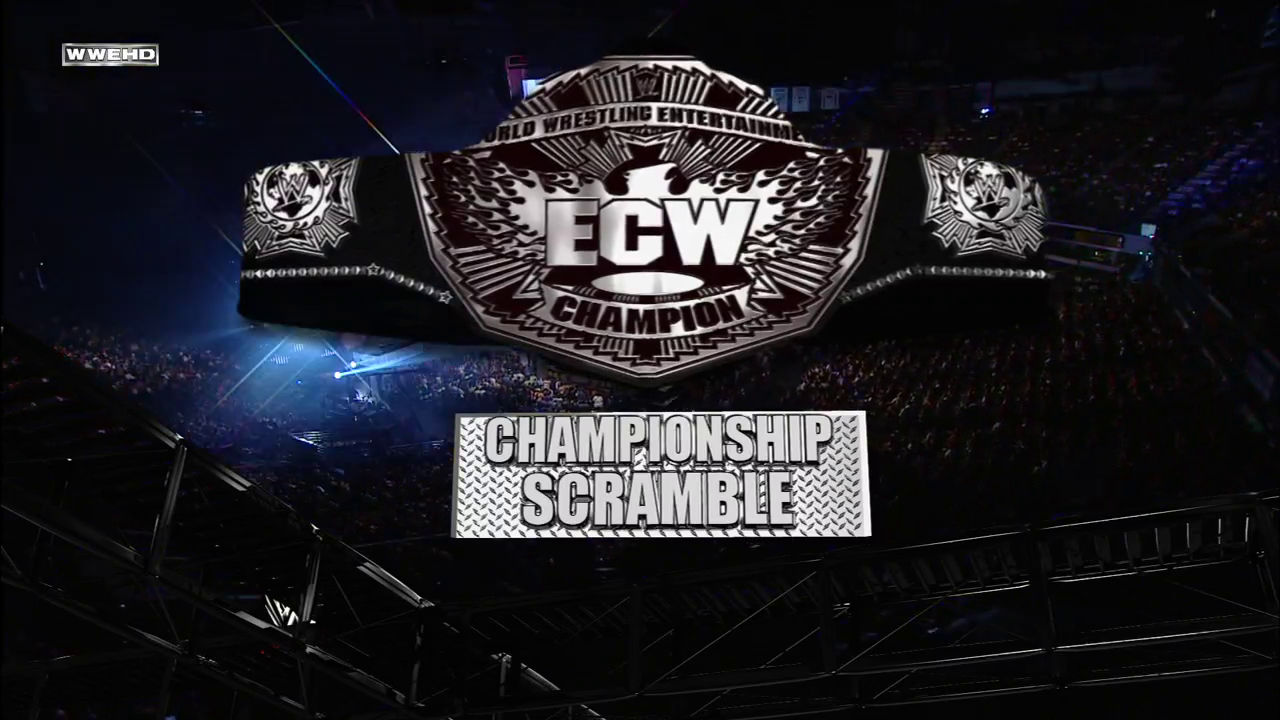 Christian and Swagger start off because it’s the only match this brand knows right now. We’re starting off the PPV with this which is a good sign but it would have been nice if they’d OH I DON’T KNOW announced all the wrestlers. Swagger dominates with his amateur wrestling takedowns and the OOOOooos from the crowd are refreshingly loud. Christian counters a takedown into a Jarrett sleeper hold but Swagger just dismantles Chris with a beautiful gator hold. Jack saves his good stuff for the loud crowds I guess. That wouldn’t last. Christian hits Swagger with the achy-breaky-back-leg at the same time the buzzer announces the next arrival in a cute moment.

Here comes good bad guy Finlay, full of eye damage and salt. Stiff shots and Earthquake stomp gets two on Christian until Swagger times his comeback correctly and gets Finlay in the eye then rolls him up to become CURRENT ECW CHAMPION JACK SWAGGER. Fuck’s sake, why are they still sticking with that wording, no wonder it confused an entire generation into insisting The Brian Kendrick is a former WWE Champion. Christian and Swagger counter finishers until Chris gets a reverse DDT for a big near-fall.

Tommy Dreamer is next with his tin-foil trousers and a big-arse pop. Everyone makes like ninjas in a Steven Seagal film and flies around for Tommy while the crowd eat it up. Tree Of Woe connects on Christian and then we get some awkwardness as Christian clearly doesn’t want to take whatever Swagger’s got planned.

Finlay dumps Swagger with the Celtic Cross to become CURRENT SCRAMBLED EGG so everyone goes after him. Swagger and Christian have some miscommunication on the top rope and take forever to hit a superplex oh wait never mind they’re waiting for Mark Henry to show up so he can kick-start the Tower Of Doom. Christian gets press slammed out the ring, Finlay gets headbutted and Dreamer takes the World’s Strongest Slam for Henry to become CURRENT BUN.

We’re in the last five minutes so everyone gangs up on Henry (to boos, hahaha) and Finlay hits a fucking suicide dive onto Swagger. Everyone dives to the outside and Henry teases one too, but Swagger takes out his knee and nails the Vader Bomb to become CURRENT NEVADA.

Two minutes left so Henry guillotines Swagger while he’s resting on the ropes and the crowd loses their minds over that.

Christian gets the Killswitch on Swagger but Dreamer interrupts the pin to DDT Christian to become CURRENTLY FAT.

Minute ten left and everyone ends up in the ring at the same time trying to pin one another while someone interrupts and the time just expires anticlimactically with nothing approaching a near-fall.

Winner and still ECW Champion: Tommy Dreamer (The emphasis was on the bumps & nuts and it mostly delivered that. Swagger and Christian having some awkwardness was interesting for “ooo I wonder what the story is behind that” reasons and aside from the flat finish it was OK but I’m sure I’ll forget about this in an hour’s time.)

But in bigger news, this would turn out to be Henry’s last ECW on Sci-Fi (televised) match as he’d show on Raw not long after this (which probably explains why he was losing to Bourne until they realised they needed him for this thrown-together PPV match) so that rope guillotine must have turned some heads.

Henry was drafted to ECW on Sci-Fi in much the same way The Hulk was dumped in Planet Hulk and like that story arc, Henry made the brand his own thanks to his own improvements on the mic & in the ring and being paired with Matt Hardy for his career-best matches. His stint here set up the Hall Of Pain & Orton title victory that made everyone who didn’t watch this version of Henry jerk their heads and exclaim “when did Henry get good???”

Overall: ECW’s still OK because it’s not BAD but it’s not GREAT either so hurry up and assemble your crew Regal. Oh and hit Finlay in the eye until he turns proper-bad, OK?