Rematch from last week’s upset. Henry clubs away as Striker compares Evan to Finding Nemo because there’s not much else to say when Henry’s plodding away. Evan avoids a walking splash, gets a few shots in, tries a pin and then gets launched into the corner from the kickout. Bourne attempts a crossbody but Henry delivers a Fallaway Slam sending him out the ring but when he tries re-entering, Tony Atlas grabs him right in front of the ref.

Winner via DQ: Evan Bourne (Bourne’s getting re-built brick-by-brick but because he got injured the last time they gave him this push they’re using Duplo instead of Lego. Match was nothing by itself but if it means Bourne getting a real win over Henry then it’s all good.) 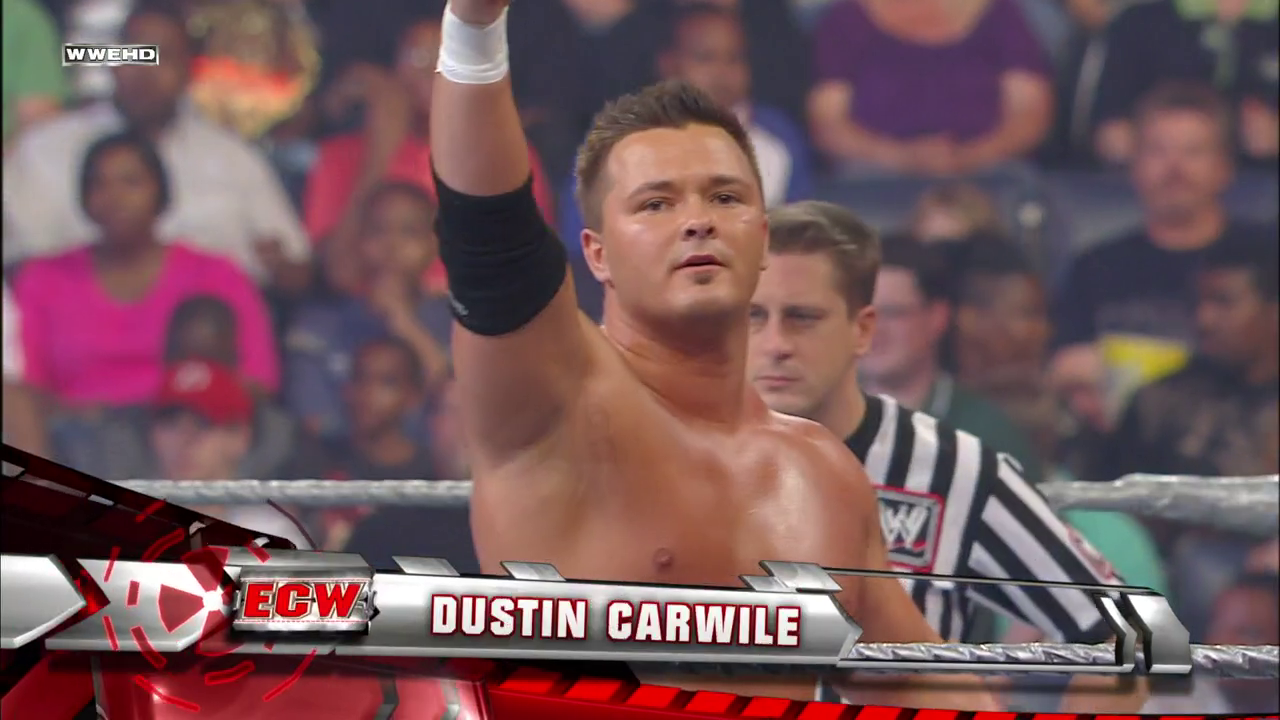 Dustin’s a Memphis career jobber. Ryder gets an inserted-promo where he explains he’s so much more than the Woo Woo Woo Guy. Yeah he collects action figures too. Dustin gets a quick Sunset Flip as Ryder continues to let his jobbers get offence in because he knows he may have to team with them for the Raw Tag Titles years from now. Missile dropkick, Zack Attack, 1-2-3.

Roving reporter Gregory Helms interviews Finlay and his shiner. Fit isn’t ready to return to the ring yet but when he does it’ll be eye-for-an-eye.

Nikita is happy Paul is getting Dreamer’s last ever match on Sci-Fi as he has no chance this Sunday. Don’t worry, wrestling Paul will make you glad to be retired. Burchill uses his default CAW offence and squeezes Dreamer’s head for a bit but the crowd isn’t responding. Burchill yells “C’mon Tommy, E-C-Dub!” and they still don’t bite even when he calls their spots. By the fourth chinlock they take the hint and start revving the Dreamer engine, who responds with a Russian Leg Sweep. Burchill delivers a big ol’ brainbuster but Dreamer shrugs it off to avoid a clumsy knee and end Sister-Fucker with a DDT.

Winner: Tommy Dreamer (The further WWE gets from Yonkers, the less the crowd cares about The Weeping Statue of Dreamer being rolled out.)

Post-match Dreamer thanks the crowd who are suddenly huge Tommy fans now he’s complimented them. But before they give him a big “Boston Sucks” chant, Swagger interrupts and laughs at Tommy’s last chance of glory. Dreamer clarifies it’s not about glory, it’s about knowing when to leave when you can’t go anymore. Update from ten years later: he’s still going, not even Dr. Kevorkian can stop Dreamer. 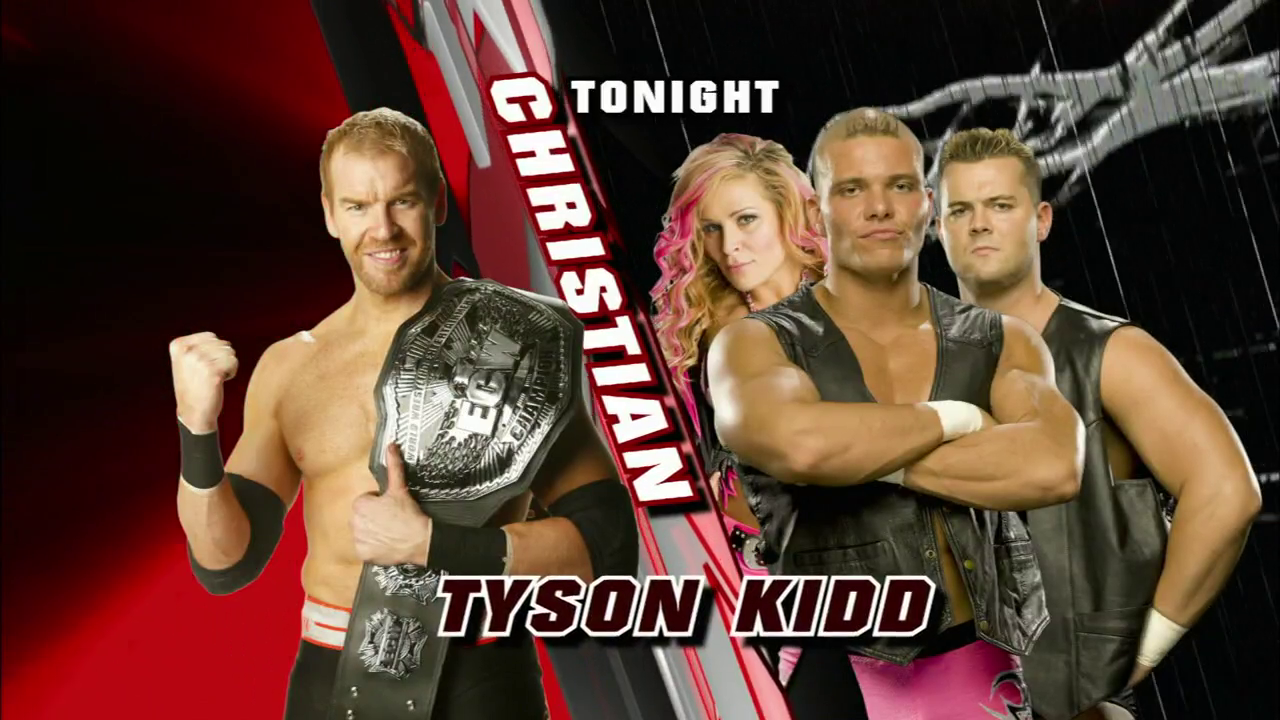 Kidd starts off with mat-wrestling (which he does really well) but Christian’s flying X-Pac kicks stops that. Kidd shows off his standing-grappling and that’s pretty too but the crowd doesn’t give a fuck so Christian gets distracted by David and gets dunked into the ring steps to take us to break.

When we return, Kidd busts out the Lance Storm rolling single crab (apparently called the Canadian Shrimp according to Striker so who knows.)

Kidd has the sense to block Christian’s counter attempts which you don’t see enough of. Christian still manages to turn it into a small package so Kidd gets the double-arm submission and the Memphis crowd clearly loves Lucha Libre as they finally start making noise for their lad Christian. He unleashes his lanky comeback but a missile dropkick only gets two. Kidd blocks every move Christian throws at him and manages the Summerslam ’92 counter to a Sunset Flip but he’s the wrong Hart member so it doesn’t finish the match. Christian turns a sit-out dropkick into a powerbomb and crowd are really feeling it. Kidd tries a springboard crossbody but Christian turns that into a powerslam but before he can finish, Swagger distracts at ringside and allows Kidd to nail a top rope leg-drop for two fuck. Dreamer waddles in to take out Swagger & the Harts with a Cannonball Run and the crowd are going BANANA as Christian finishes with the Killswitch.

Winner: Christian (Started off as a Tyson Kidd highlight reel but the crowd really enjoyed the dog & pony show that followed. And Kidd wasn’t even great yet.)

Post-match, Dreamer poses with Christian and then gives him a DDT and tells the crowd “he had to.”

I wasn’t planning on reviewing this one the same week but it syncs up with Extreme Rules 2019 so what the hell.

Gregory Helms interviews Christian backstage and he heels it up, telling us he doesn’t mind retiring Dreamer and he’ll miss him taking his shirt off and looking like a melting candle. Dreamer responds and calls Christian “the wick” (of the candle) and Swagger shows up but before he says anything the other two leave. OK that was funny.

This is middle of the card but unlike previous times where the ECW match has been treated as an afterthought, this gets the special in-ring introductions and special silver tights for Dreamer. It’s also Extreme Rules but it’s a Triple Threat so y’know. Swagger disposes of Christian & Dreamer so they both return with plunder and go twat-heavy with the bin lids and Singapore Cane (which Striker insists on calling a stick so Mathews gets a rare chance to rag on him). Swagger looks a little lost out there with the three-way weapons shit has to wander into position for Dreamer’s Cannonbin Run.

Dreamer tries the E-heart-C-just-W-stopped Running Dropkick but Christian decks him and does it himself (without the hardened arteries). Swagger gets rid of Dreamer and goes to town on Christian with actual wrestling. We can’t be having that so as he removes the turnbuckle pad (which is who he won the title), Dreamer twats him with another Singapore Cane. Tommy misses an elbow on Christian who tries a vault to the outside but meets Swagger’s bin. Swagger & Dreamer bring in a load of bins and Christian assists with the Tower Of Doom.

No-one can get a pin so Christian attempts the Killswitch but gets dunked onto the exposed turnbuckle. Swagger tries to follow up with a Swagger Bomb but Tommy interrupts with a crutch (a real one, not his reliance on wearing ECW shirts so he can sell them later), leaving Swagger wide open for the DDT and Christian too dazed to stop it. 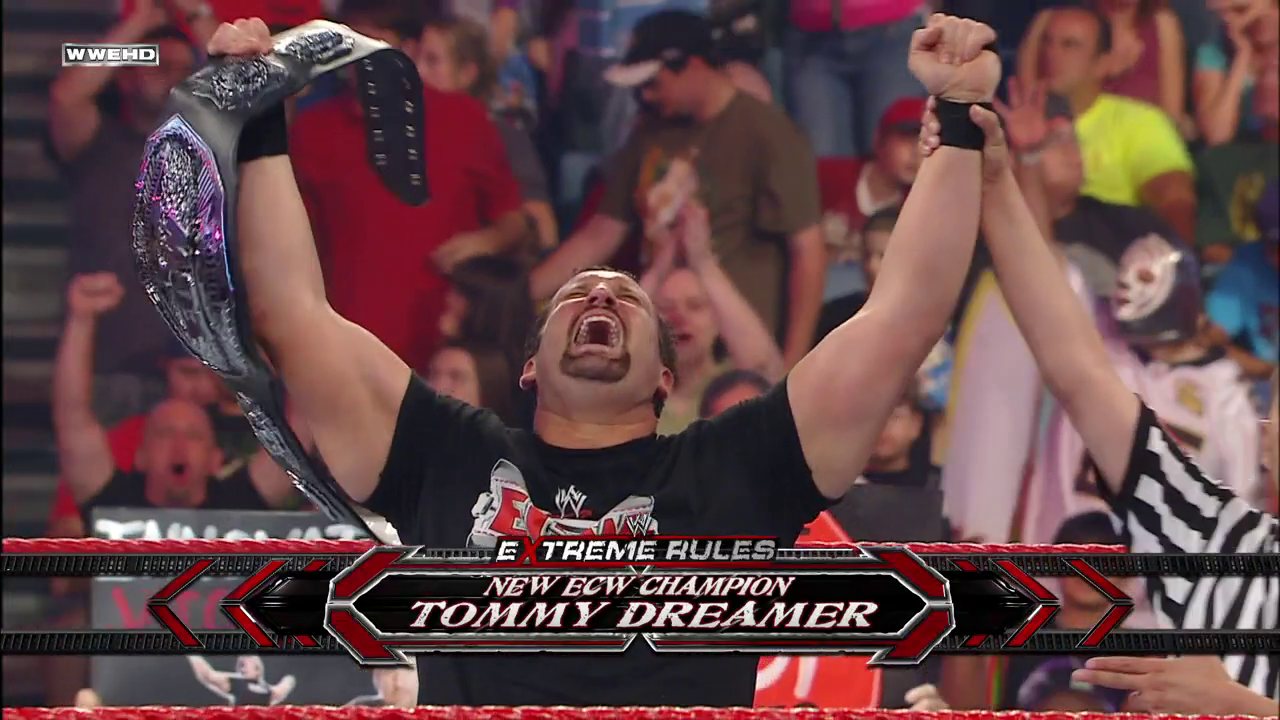 Winner & New ECW Champion & Still Employed: Tommy Dreamer (The Extreme Rules stuff distracted from the supposedly serious match with the crowd more interested in bins and tables, but it was a more interesting three-way than a singles match would have been. Even though reaction to Dreamer has been mixed on the road, it was the perfect time to give Tommy a run (hopefully briefly) as the brand needs something other than Christian vs. Swagger on top. Plus there were plenty of ECW fans at ringside with signs to give it that “boyhood dream comes true if you ignore that 12 minute run he had in 2000” feel they were aiming for.) 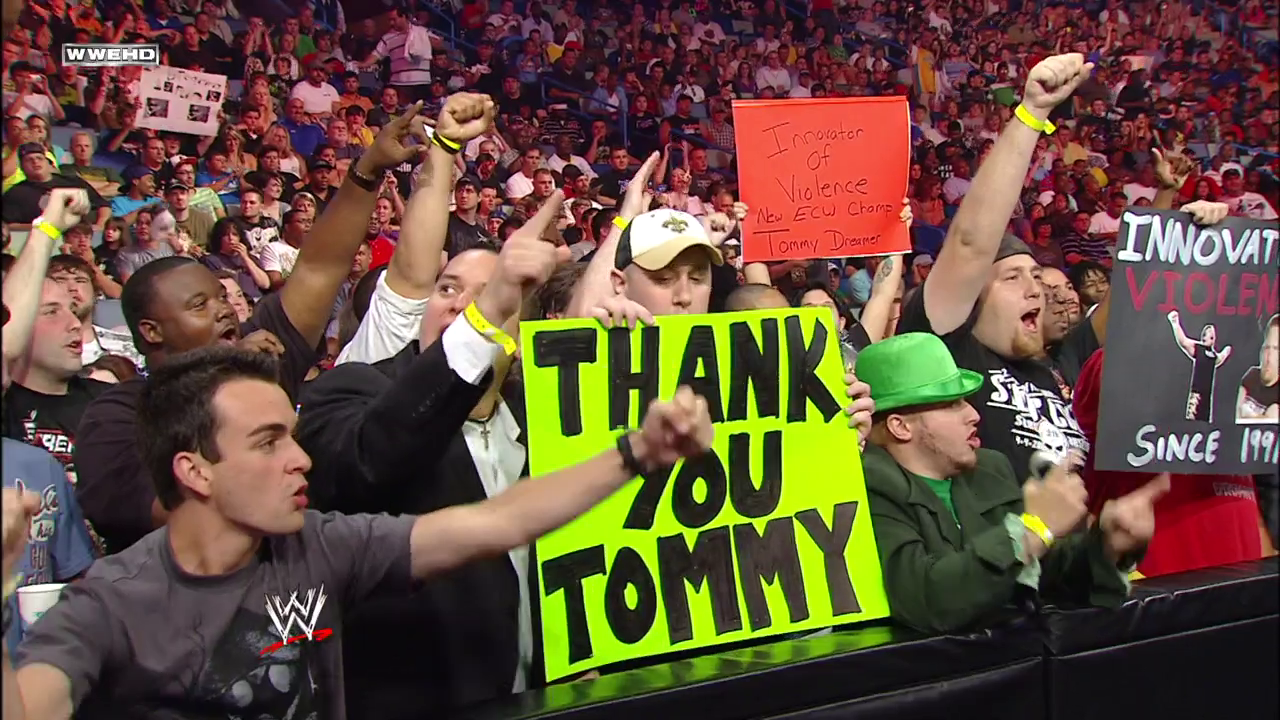 Overall: It’s either a bad or a good sign that Dreamer is the highlight of the show, depending on how cynical you are. The other potential highlights (Bourne and Kidd) are still being warmed up so he might as well. Extreme Rules has a sweet Jericho vs. Rey match so go watch that instead of ECW on Sci-Fi if you’re not a Tommymaniac.