After a feeling out process, Bourne explodes with a dropkick all over the face of Kidd. Bourne goes after Natalya like a goof but is able to nail a headscissors in the ring as we go to adverts. Back from black, Bourne is still beating up Kidd until he gets cut off going for a springboard. Kidd takes him down with a double-arm and yells I’LL BREAK HIS NECK. Er sure you will. 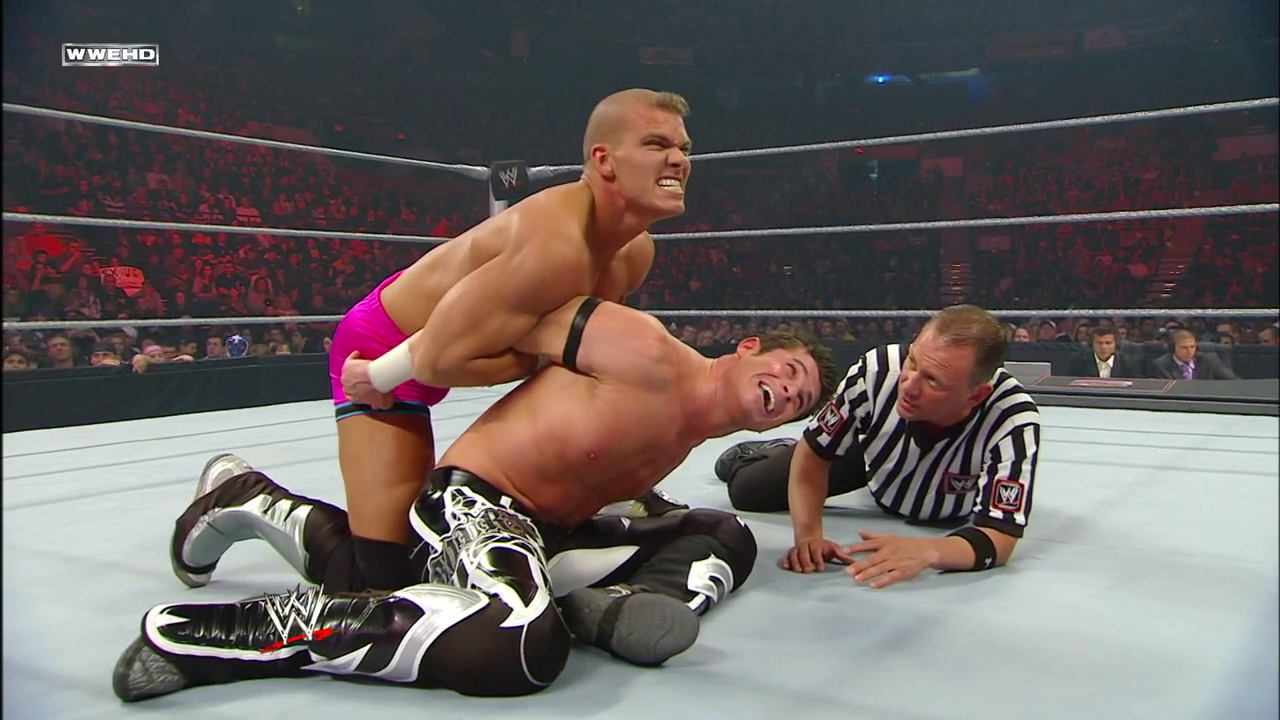 Kidd pops off a tilt-a-whirl and continues to big dog Bourne until he lands a springboard kick right to the back of the head. Everything Bourne does is so pretty you’d think it was shot by Peter Greenaway. Bourne ends up dunked by Natalya again because WWE good guys are dumb. However, Finlay shows up in street clothes to twat Kidd off the top rope allowing Bourne to pin Kidd with the Shooting Star Press.

Winner: Evan Bourne (Kidd was still learning so this wasn’t the balls-out match you’d think, however by having Kidd focus on being a diddler, the crowd made noise for Bourne rather than Bourne’s moves so well done.)

Jack Swagger (w/ suit) complains that Christian dared to cheat to win his title and then dared to defend it against Dreamer. “He’s not the heart and soul of ECW he’s the fat and cholesterol of ECW.” Dreamer takes exception and runs to the ring but Jack escapes him by slowly walking away.

Zack Ryder shows up backstage to WOO WOO WOO to NO NO NO reaction. Tiffany books a match with him vs. Finlay and Ryder agrees but worries about Fit messing up his hair. Tiffany says she thinks that’s impossible and even if she used a clown-horn to signify that was the punch-line, it still wouldn’t be as funny as the complete silence that followed her.

Kozlov training package with lots of foreignese yelling so the Yanks know he’s a baddie. 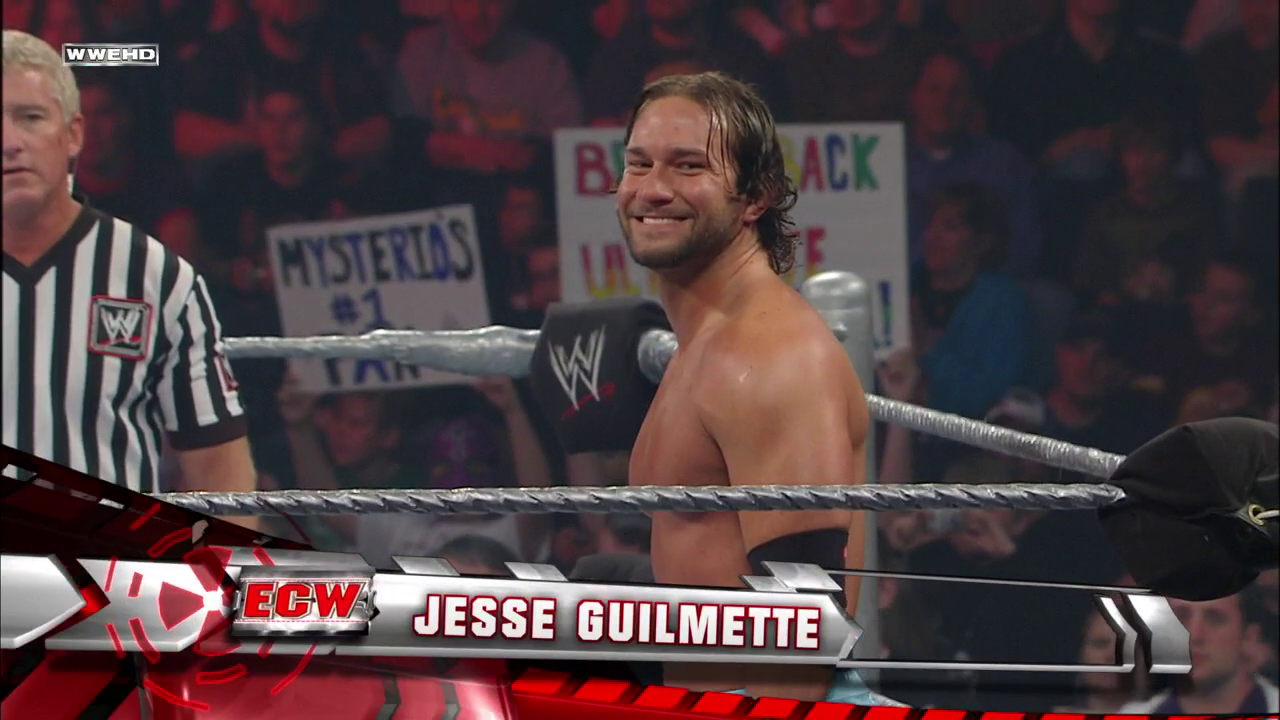 RAW REBOUND: Shane McMahon vs. Legacy in a handicap match with Shane almost winning because he’s SHANE MCMAHON DAMMIT. Luckily for Legacy, he misses the announce table elbow and they take apart his body like the opening scene of Robocop until Batista makes the save.

Roving reporter Gregory Helms interviews Mark Henry. Why don’t we have a click-bait gimmick nowadays? A slimy heel who makes up articles to get wrestlers mad at each other and then when they fight he runs around the ring shouting out adverts. “Hit him harder than your Bluechew powered cock, Henry!” 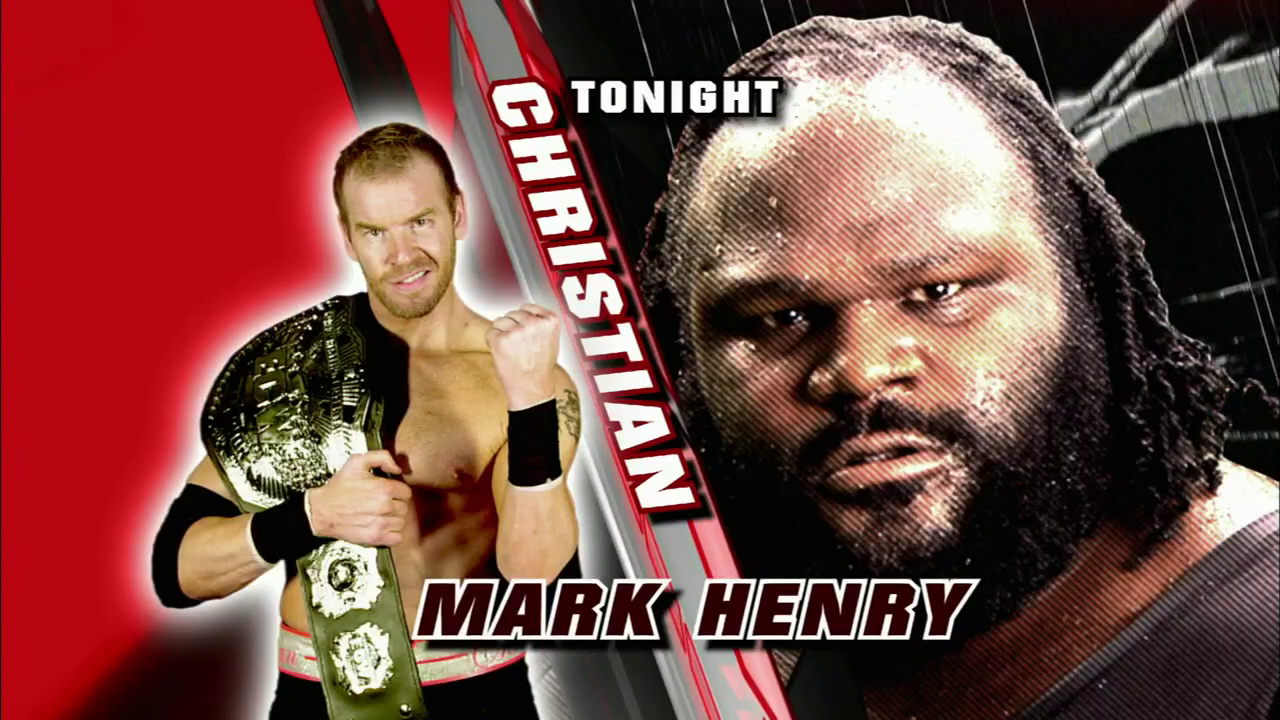 YIKES at those new graphics. Non-title match and unsurprisingly Henry dominates until Christian gets the Pendulum Kick and starts choking Henry until Swagger runs in to stomp out Christian. Dreamer also appears so Tiffany makes it a tag match.

Back from break, Christian & Dreamer are double-teaming Swagger while Striker calls Tiffany the “benevolent beauty” but resists the urge to say she’s a better leader than Obama. Swagger tags in Henry and that’s the end of Dreamer on offence. Swagger throttles Dreamer with a chinlock and he stays there, waiting for the crowd to start drinking the ECW juice but it ain’t coming so he makes the luke-warm tag to Christian. Captain Charisma is able to take down Henry by working over his knee but Swagger stops that and I thought we were going to the end of the match but I guess Swagger’s going to beat up Christian to no reaction as well. Sure enough we get the exact same scenario we just got which wouldn’t be a problem but the crowd doesn’t give a damn. Finally they realise this match isn’t ending until they cheer so they make noise for Dreamer’s hot tag and Henry accidentally avalanching Swagger in the corner. Christian tries a dive to the outside by Henry catches him so Dreamer follows with a rolling swanton off the apron.

However Swagger removes the middle turnbuckle and bonks Dreamer off it, leading him to finally end this with the Doctor Bomb.

Winners: Jack Swagger & Mark Henry (Hot closing minute bit aside, this match felt ∞ long. Sometimes this show realises it doesn’t have enough to fill an hour and decides to stretch out a match way longer than needed, which would be OK if the crowd cared but tonight the fuck machine wasn’t working.)

Overall: So they’re finally pushing Dreamer to get a PPV title match when he’s at his most sympathetic and NOW the crowd decides to not care about him. Beautiful. Watch this show for Bourne then stick on Netflix.