Last week Hornswoggle stole Swagger’s title so Finlay’s wrestling Jack tonight and possibly getting a title shot out of it if he wins, which doesn’t set a great example to the kids.

Grisham remarks that Burchill “can hit as hard as Mark McGuire” which explains his burger king tits. Usual Dreamer offence until Burchill counters a bulldog by launching him into the ropes allowing Paul to get his favourite move the chinlock. The crowd gives Tommy the energy to collide with the Tree Of Woe but Paul shoves Dreamer into the ropes again before finishing Dreamer with A Neckbreaker.

Winner: Paul Burchill (No wonder the only thing Paul wins is Hook-a-Duck if that’s his finish.)

John Morrison & The Miz make their way to the ring with Dreamer still there. They mock him for being so old and fat he can’t get out of the ring for the next segment, but if they told him there was a fresh cheesecake in catering he’d have moved. Miz tells Morrison to stop because he doesn’t want Dreamer to cry again. Miz calls him the anti-Ric Flair because the fans can’t wait for him to lose. He should go home and wait for the Hall Of Fame call that will never happen because the only people that want to see him less than the fans are his wife and kids and THAT DOES IT with Dreamer attacking both men. For two seconds before getting destroyed. God these two were brutal, Bill Burr was kinder to Philadelphia.

Jamie Noble vs. The Boogeyman

Noble offered to save the show so Teddy Long gave him this mach. Same match Boogey has every week to ever diminishing crowd reactions. Un-trained slam, 1-2-3, worms.

Winner: Boogey was over in 2005 but then again so was Daniel Powter and no-one gave a fuck about him in 2009 either.

Swagger is interviewed backstage and he sounds way more comfortable and natural, even managing to insert the WWE-script-o-matic shit about ”that ogre Hornswoggle” without embarrassing himself. Every week I wonder what happened to him. 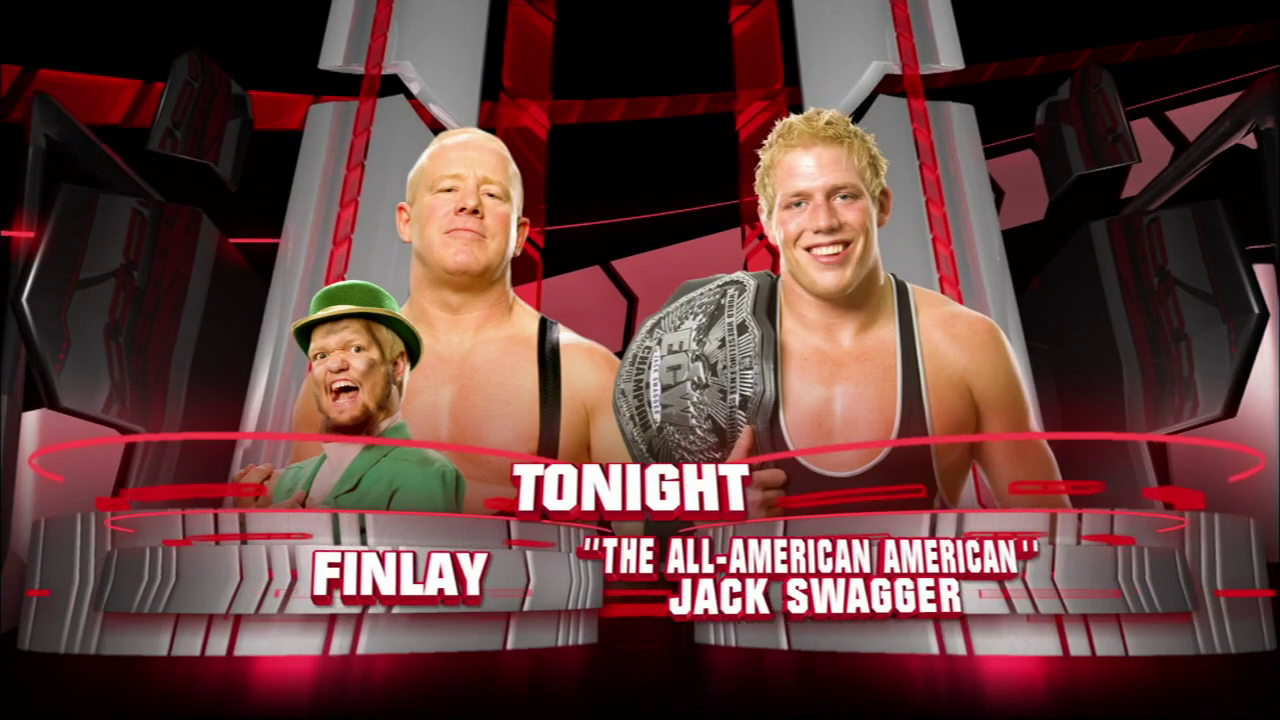 This match was set up last week when Hornswoggle stole the ECW Title because he promised Giant Baba he’d bring it to AJPW then sent it back to Swagger after running over it with his Tonka Truck. Swagger takes over with his amateur wrestling skills with Finlay keeping him away with hard twats. Swagger attempts a single-leg but Finlay gets a headlock so Swagger needs to grab the ropes. It’s exciting to watch but the crowd isn’t receptive so far. Finlay locks in a single-crab and switches position so he can turn it into a modified Indian Deathlock. Swagger isn’t happy with being out-stretched so he slaps Finlay before they collide heads in the corner in The Stupid Spot That Will Never Die. When we return from break Finlay is stretching Swagger. Striker is at his best here, correctly calling the moves and why they hurt so much. Striker has his faults but when there’s a mat-based contest that enables him to show off the size of his brain then he makes it mean so much more. Meanwhile Grisham sticks to his strengths and tells us “No Way Out is in two weeks!” Swagger counters an Irish Whip into the corner and Finlay has to take a breather on the outside while Striker lists the muscles that could possibly have been affected by such a move because he’s on the good stuff tonight. Swagger locks in a Body Scissors and this is where the crowd should be going nuts for Finlay but he’s a rotten face and crowd isn’t impressed by this Family Shopper UWF-I. Finlay halts a belly-to-belly with a headbutt but Jack carries on hitting him because he’s the All-American American. Hornswoggle distracts Swagger, allowing Finlay to clothesline him out the ring. Swagger gets the better of him though and hurls his shillelagh up the entrance ramp so he has no Plan B. Hornswoggle re-appears with a second shillelagh (Plan C) and knacks Jack in the leg, allowing Finlay to hit the Celtic Cross and give Swagger his first loss.

Winner: Finlay (Your enjoyment of this will depend on how much you enjoyed World Of Sport but I’m all for a mat-based wrestling with Striker helping to put the match (rather than himself) over. If only the crowd treated Finlay as something other than Hornswoggle’s ladder.)

Overall: Swagger, Finlay, Morrison and Miz make for a good episode if you treat the rest of the show as coffee breaks. Or in the case of Boogeyman, arsenic.

I’ve been Maffew and you can follow me on Twitter and watch me on Cultaholic and may Chest-Pounding Swagger bring you good fortune.