And of course despite losing his title, the first question Todd Grisham has is about his brother Jeff and his latest mishap.

Jeff went into shock after ”the explosions” so clearly Brian Pillman is behind everything. Matt compliments Swagger which brings the New Champ out, showing more character in his entrance than the entire undercard combined.

Hardy will be getting a rematch at this Sunday’s Rumble but Swagger warns him to watch out or it won’t just be his brother going down in flames. Them’s fighting words and both men brawl until the referees get involved, with Swagger smacking Hardy when the refs have him held back.

Evans is a local lad who retired three matches after this. Ortiz throws some headbutts and a Saito Suplex and even the commentators are pointing out Ortiz is still finding his way. Big O running splash ends it.

Recap of Dreamer’s pledge to retire if he doesn’t win the ECW Title before a certain point. Dreamer and Teddy Long are talking backstage until Paul Burchill shows up, apologising for interrupting but ”some of us have careers worth saving.” Of course this is wrestling so ten years later Dreamer’s still booked every week and Burchill is selling foreign cigarettes at car boot sales. Anyway, Paul demands a rematch with DJ Gabriel but Teddy tells him no but he can wrestle someone of Teddy’s choosing instead.

Paul Burchill vs. The Boogeyman 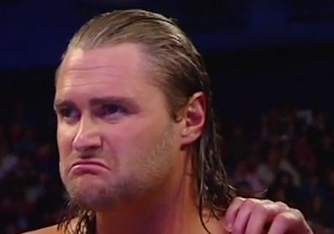 Boogey pops up the pirate for a bit until Katie Lea kicks him for the DQ.

RAW REBOUND: Vince McMahon is back after six months away because it’s the Road to Wrestlemania and all that. Last week Steph fired Jericho so he asks Vince for his job back. Vince refuses so Steph makes him apologise to her and then the WWE Universe before giving him his job back. I think everyone was a heel in this segment.

Never mind that shit (in the divas bags) HERE COMES RANDY. ”Ever since she’s pumped out a few grandkids for ya, she’s useless.” Vince is appalled and demands Randy apologise or he’s fired. Randy refuses and as Vince revs up his throat, Randy PUNTS VINCE IN THE SKULL/HEAD.

What a segment. Orton vs. McMahons would get better in the following weeks. Then worse. Then collapse in a heap at Wrestlemania. But you’ve got to appreciate Vince taking a full-on Johnny Wilko.

John Morrison vs. The Miz vs. Finlay vs. Mark Henry 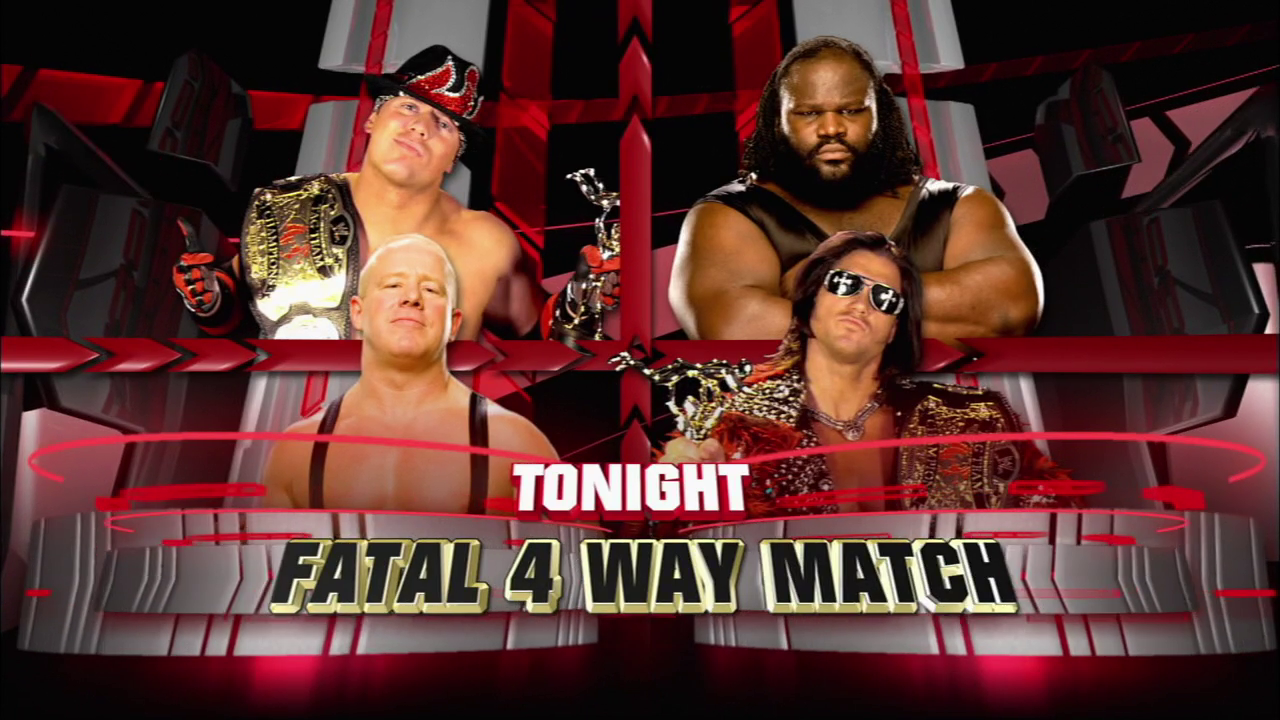 Fatal Four Way for no reason. The commentators try to make it sound like this has Rumble implications but for these guys it’d be ”guy who wins gets eliminated by HHH first.” Finlay gets dumped over the top rope to give the crowd an idea of how Rumbles work. Morrison gets dunked on while attempting a springboard. This is just moves so I’m not typing up everything. Finlay twats Henry with his stick (as is tradition) so everyone dumps Henry outside leaving Morrison & Miz to double-team Finlay. Fit bulldogs both of them, Hornswoggle splashes Morrison, Finlay delivers Celtic Cross to Miz. However, Morrison kicks Finlay and shockingly not-shockingly pins Miz.

Winner: John Morrison (Like Slaine, this was all about killing time.) 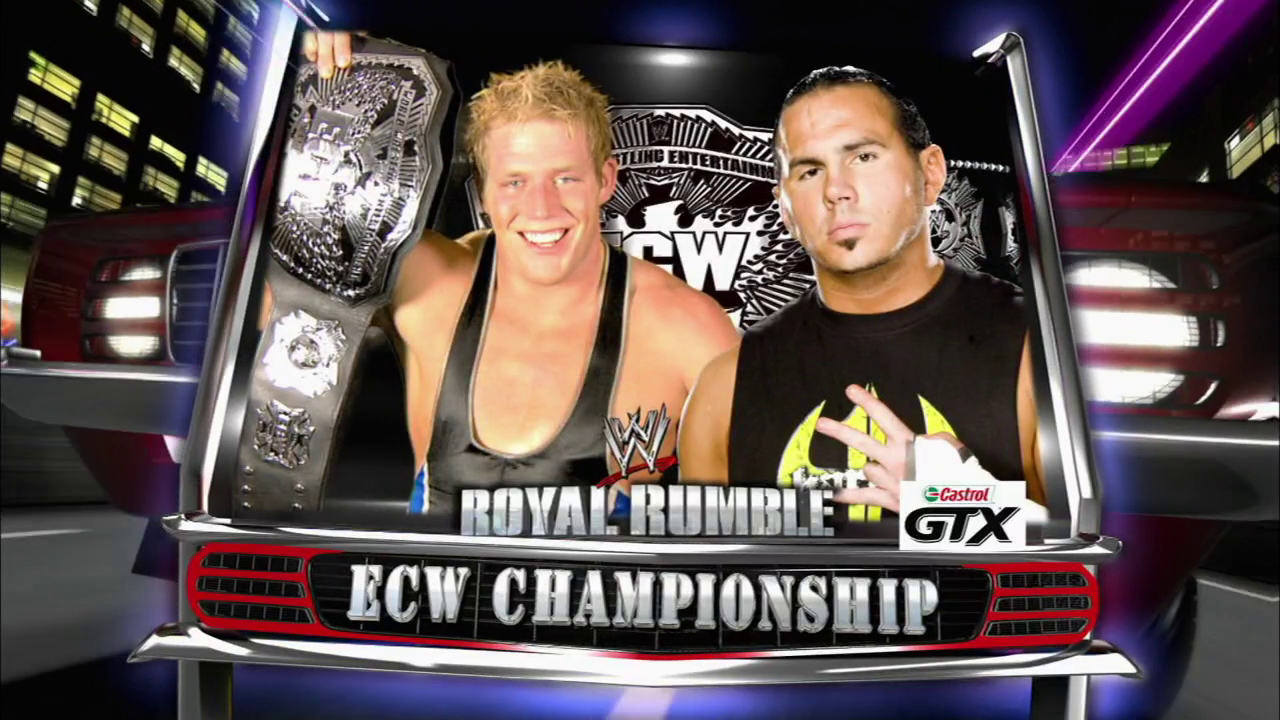 Swagger’s so full of energy during his entrance, it’s crazy seeing him this motivated after years of watching current-day Swagger. Hardy is over as hell, nothing can make the crowd boo him. Well maybe one thing. Anyway, Swagger begs off at every opportunity then attempts to trick Hardy by arguing with the ref but Matt isn’t fooled and continues to slap him daft. Swagger takes a breather before deciding to mat-wrestle. Hardy tries to stand up but Jack keeps on taking him down because he’s NCAA and stuff. Hardy sends him into the ropes so he can escape Jumping Jack Grap but Swagger pounds away to keep the advantage. Hardy escapes an armbar with a running bulldog and a second-rope elbow. Hardy charges up his taunt so Swagger gives him a belly-to-belly and a Divorce Court to continue working on Hardy’s arm. Matt manages to actually hit his moonsault but only gets two (with big OOOOOH from the crowd.) Jack hurls him into the ringpost to apparently KO Matt and finishes with the Swagger Bomb.

Winner and still ECW Champion: Jack Swagger (A fitting end to Matt’s ECW run, a match that told a story and involved body-parts being worked over and had the crowd hot for all of it. I’d forgotten how fun the big ECW match style was (when it involved Matt, Swagger, Morrison or Henry) and it makes a fun diversion from the emphasis on moves moves moves we now have today on WWE TV.)

And because only Terry Funk lasts forever, WWE decided to pull a Wrestlemania XV and change the obvious outcome of Christian returning to save Edge instead to Matt turning on his brother, thus ending Jeff’s title reign and also one of the best things to happen to ECW on Sci-Fi.

Maybe it was time for Matt to move on now they had Christian to take his place (just as Matt had replaced CM Punk) but you’ve got to wonder what would have happened if Christian had ran out with Todd mouthing ”it’s christian’ instead.