This has been building for a while but we’re a long way off having ECW on Sci-Fi Takeover: Providence so here we go.

Swagger dominates with his amateur wrestling take-downs but Dreamer twats him with a cane in response. Tommy slams Swagger on a chair as the commentators hype up his Innovator Of Violence moniker which always confused me: what did he innovate in ECW? People thought of a lot of ways to do violent shit to him (Brian Lee, Sandman, Raven) but usually the scientist gets credit, not the guinea pig. Swagger sends Tommy into the ring-post but takes too long shouting at fans so Dreamer takes him out with the least agile rolling senton off the apron in history.

Dreamer goes for a running bulldog but Swagger launches him into the corner as we go to break. Also: Charles Robinson is reffing for some reason.

Back from break, Tommy takes a shinbreaker onto a chair followed by Swagger locking in a single crab and wrapping a chair around it. Dreamer’s able to swat him in the arse with another cane. Dreamer twats Swagger in the face with a trash-can lid which gave Swagger CTE but no-one noticed until he asked to win the title in 2010. Knee-lift from Jack sets up the Vader Bomb in the corner onto a bin but agile Dreamer is able to move, setting up the WHEEZE-C-W Tree Of Woe (a move he innovated from RVD) and a Jesus pose (a move he innovated from Raven) before setting up a table (a move he innovated from Sabu). Swagger blocks a singapore cane shot and gives him a belly-to-belly. Dreamer doesn’t care and gives a DDT for a surprising two-count considering it’s his finisher. Dreamer charges but takes a drop toe hold into a set-up chair the hard way before falling victim to the Doctor Bomb through the table.

Winner: Jack Swagger (”Jack Swagger has arrived” yelled Striker after the result and he’s not wrong. A definitive win here was exactly what he was needing and this was the Raw equivalent to beating Kane in an Inferno match. This wasn’t a classic or anything but Dreamer had his working sweat-gear on and that drop toe hold alone gets it a point.)

Survivor Series happened on Sunday with nothing affecting the brand. Here’s Morrison and Miz to sell the replay anyway until The Boogeyman returns to a ”oh it’s that guy” reaction.

Matt Hardy is asked about Jeff being found attacked at his home (ohhh no I just remembered where this is going) until Swagger bumps into him (matt not jeff) to let him know he’s coming for his title.

Backstage, Hornswoggle tries to grab some sweet, sweet candy but Henry stops him and tells him it’s not good for him, the same way Henry’s not good for his daddy. Henry was the king of taking stupid WWE lines and making them sound like a bad-ass movie one-liner.

Gabriel looks like one of those dudes in the Doctors Hate Him adverts. Ganem does not. Crowd doesn’t care about the match until DJ decides to Giant Swing Ganem right out of the fucking ring.

Gabriel finishes with the anti-climatic European Elbow off the second rope.

Todd interviews Alicia Fox to clarify why she was Edge’s assistant a few weeks ago and now she’s DJ’s valet. She says she met Gabriel overseas, called a few of her friends and got him booked. I appreciate them filling in the storyline gaps but the crowd couldn’t have given less of a damn. 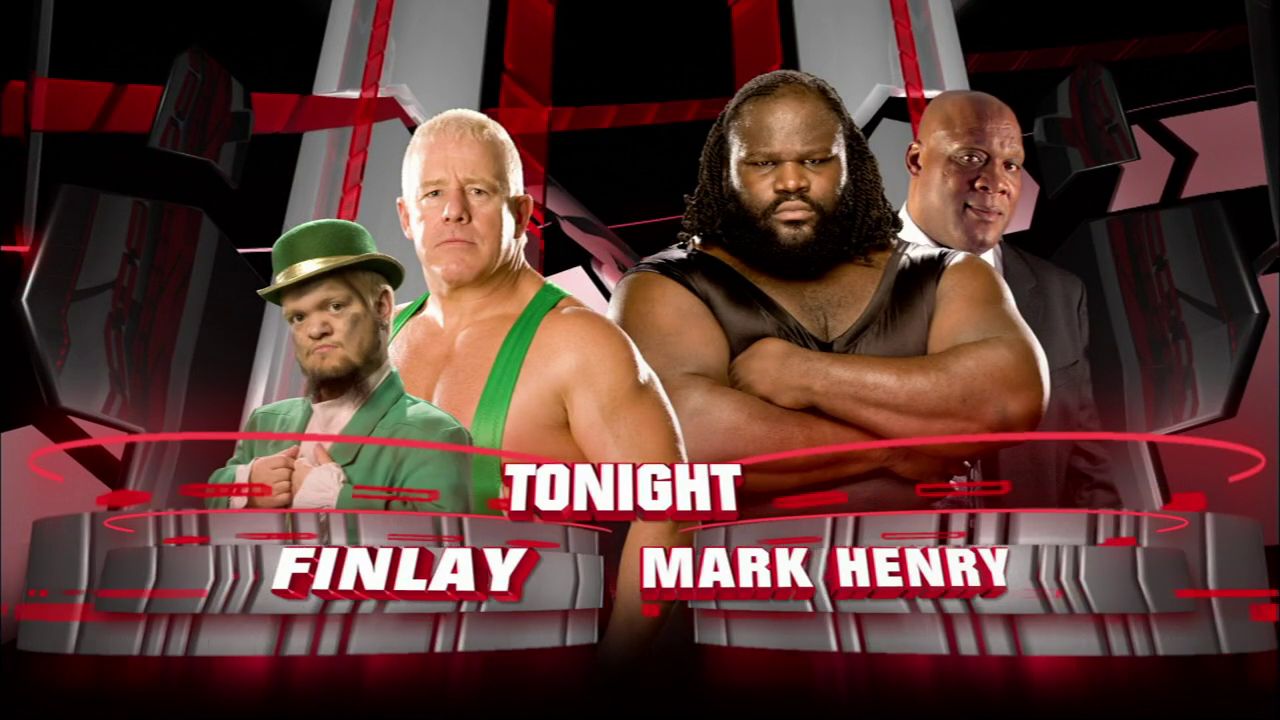 Finlay has beaten Henry a load of times due to Hornswoggle which is great for his win-loss record but not so good for making people cheer him, especially when Henry’s been pointing this out in promos. Oh apparently Henry eliminated Hardy during their Survivor Series mach so there was something relevant, my mistake. Finlay tries hitting Henry but as usual he absorbs the shots then turns into a wall like Kirby’s down-B when runs into him. Henry gives him a neck crank as the commentators discuss the cars he can lift and agree on a Ford Focus. Henry takes Finlay’s stick and hurls it down the aisle and proceeds to bodyslam Finlay for two. He misses a splash but immediately gets the advantage as he dunks Finlay into the side of the ring and it’s going to be one of those matches. 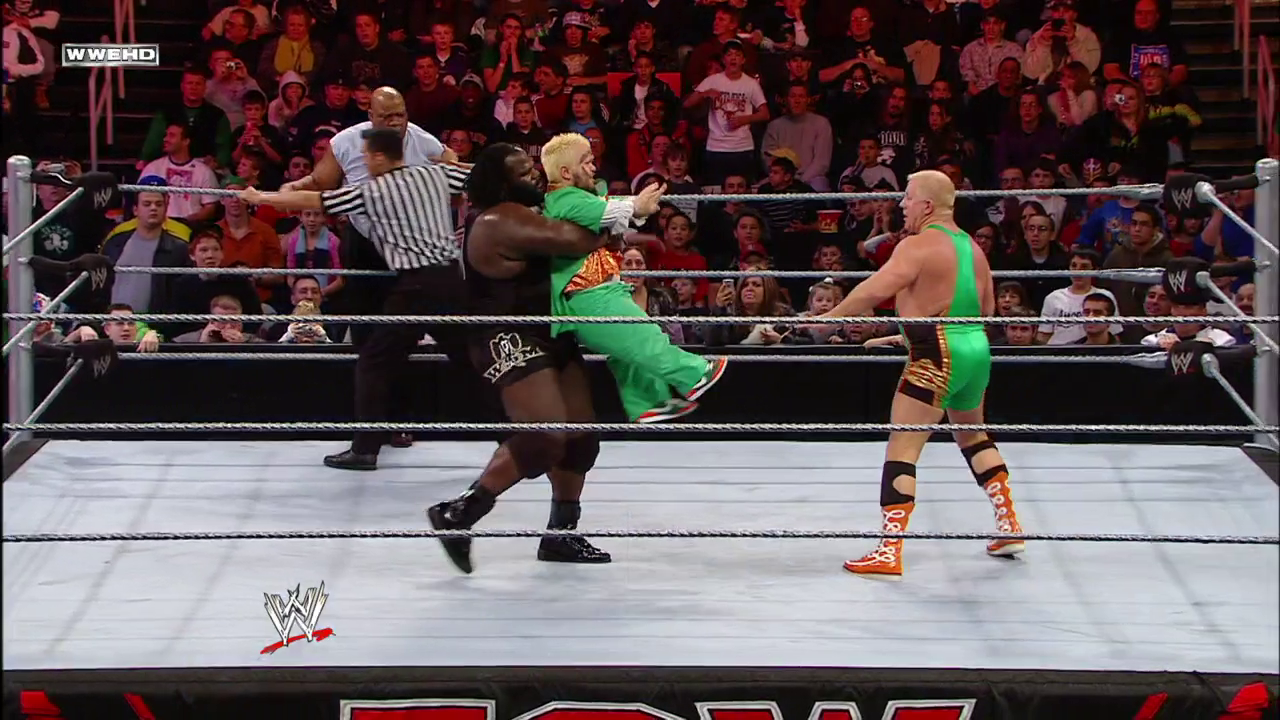 Winners: Boston for not being Providence (This match is what they break out when they have nothing else to headline and everytime they do it, the pops for Finlay are reduced because he’s always going for his stick and/or man-child, meaning Henry’s the good guy because he tries to make it a fair contest. Going to a non-finish only makes it worse as it means THIS FEUD MUST CONTINUE and it’s a long way until the Rumble when we’re presumably getting Henry vs. Hardy again.)

Overall: If you ignore the main event this was a brisk show that went down well, unsure why the shows were so short around this time but all of WWE goes to hell between Series and Rumble so at least this brand was pushing new stars like Swagger and Gabriel.

I’ve been Maffew, watch me talk crap on Cultaholic and follow me on Twitter and send me a message about how Gallows & Anderson are bad people for stealing the botch gimmick even though You’ve Been Framed has got us both beat by about a hundred years.