We’re in Atlanta, GA (baddest Atlanta in the whole USA) and John Morrison and The Miz are here to brag as we see footage of The Miz pinning HBK last night on Raw. I do not remember that happening but I’m sure message boards looked like Kristallnacht the day after.

They put over their team-mates at Survivor Series, telling us JBL is the only one doing good in this economy and like MVP, Morrison has been ballin since 5th grade. Kane has the power over fire so they’re not going to insult him and they move onto their opponents: The near 8 feet tall Khali makes out with fat chicks, Cryme Tyme will get DQ’d so they can go to the locker room and go through everyone’s wallets. They get serious when it comes to Shawn Michaels, saying they want to look in his eyes and tell him he’s a stepping stone to the greatest WWE Tag Team of the 20th Century. Miz & Morrison were fine being insulting people on the mic but they were making you feel it when they turned serious, only Jericho was anywhere near them during this time. 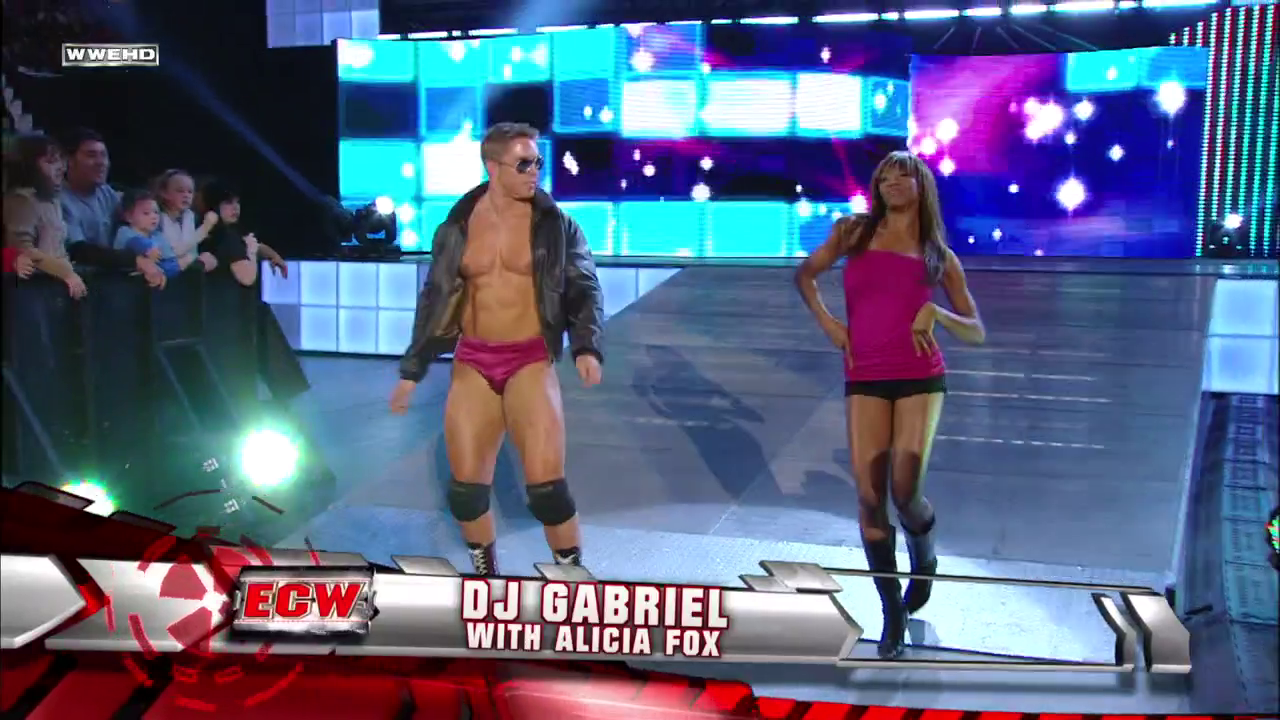 New guy debut out of nowhere as the New Superstar Initiative continues with no warning. Gabriel’s a Preston lad who had lost squash matches to Angle and Umaga prior to this. He’s accompanied by Alicia Fox who like the butler in The Shining has always fucking been here. Sal’s a pale ROH guy who won the tag titles with Tony Mamaluke which may be the only time in history Mamaluke’s been the heavier guy in a team. DJ shows off dancing skills, his smooth fireman’s carry and European Uppercut off the second rope to get the easy win.

Winner: DJ Gabriel (DJ looked comfortable adding little dances to his offence and was built like a 1985 supercomputer so I expect a long and lengthy career from him.)

This is an Amateur Wrestling Challenge so no striking, takedowns score points and there’s a five minute time limit. Swagger has head-gear and a gum-shield but Dreamer is wearing his usual ECW shirt swiped from the concession stand and baggy pants. Swagger scores 4 points straight away from separate takedowns. Jack continues scoring points and being cocky so he offers Dreamer his leg but Dreamer slams him down for two points. Jack gets pissed and gets on all fours and dares Tommy to get him like Beecher in Oz. Dreamer kicks him in the ribs instead and gives him a DDT for the DQ. Tommy gets the mic and says ”Oops, my bad. You win!”

Winner via DQ: Jack Swagger (This didn’t overshadow it’s welcome and proved Swagger is a fine amateur wrestler but Dreamer is a fine mediocre one.)

Backstage, Swagger demands to see Teddy but gets whatshername instead so Jack starts giving her shit until Ricky Ortiz defends her. Swagger mocks his rally-towel and says his fans should use it as a blind-fold during his matches (ooooohh) so Ortiz says Jack should use it so people think he has a personality (OOOOHH). Teddy interrupts and gives Swagger his rematch next week but in an EXTREEEEME RULES MATCH. 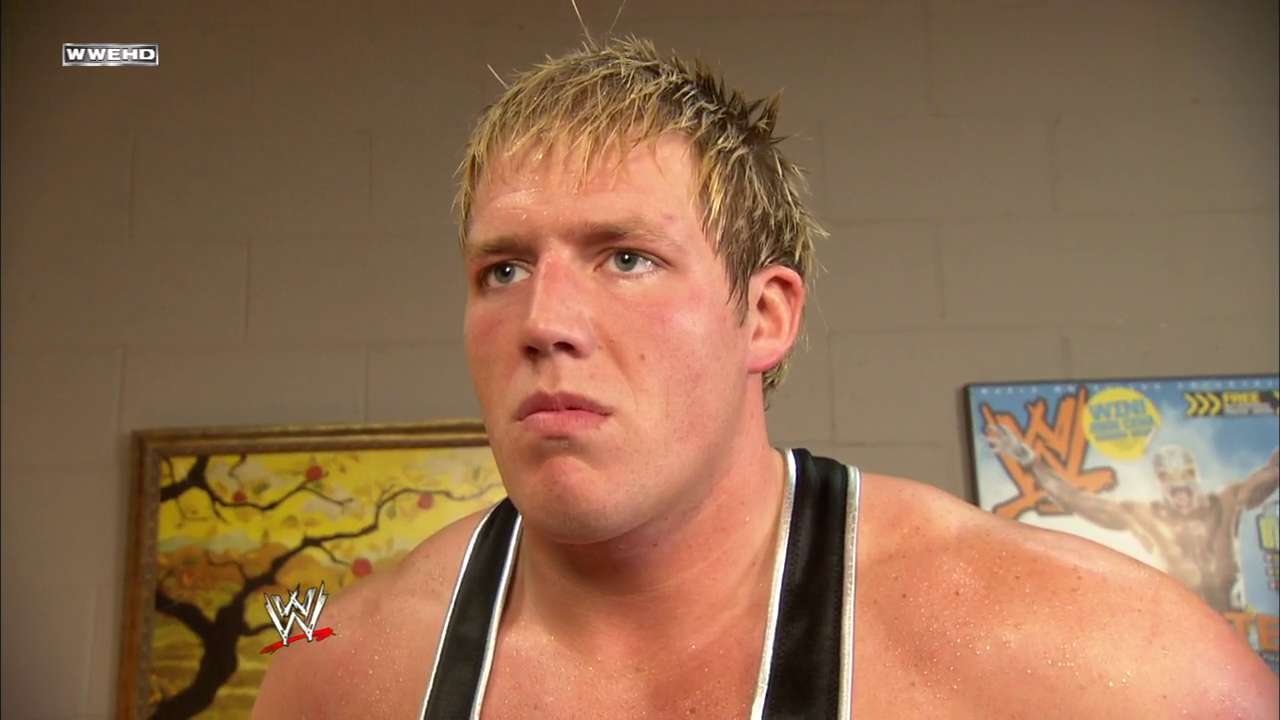 Striker runs down the Survivor Series card with a blackboard to really explain this whole Team Elimination thing to the crowd and how little was booked on this show. 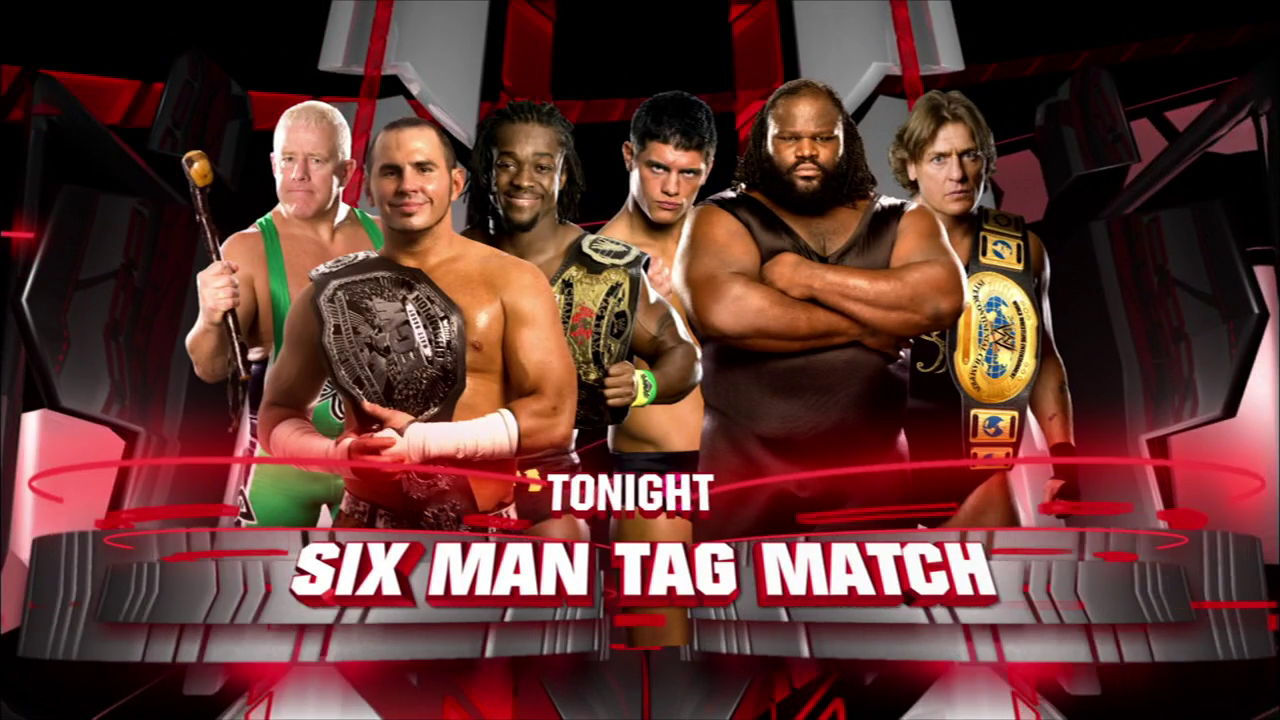 Kington is the World Tag Team Champion, this is Regal’s debut on the ECW on Sci-Fi brand and there’s no ECW match on the PPV. Regal and Finlay start like old times, except with Regal wearing a smashing blouse. Quick tags occur with nothing happening until Matt slaps Henry on the apron and they pretend they’re going to brawl before the advert break kicks in.

When we return, Regal is working over Kofi until Fit tags in and we get duelling European Uppercuts.

Finlay goes up top so Regal launches him outside and then uses the Power Of The Punch to keep Finlay occupied. Knee-brace-less Cody tags in, does nothing, tags in Henry. Henry puts Fit in a nerve hold and crowd chants for Hardy. Regal locks in a Full Nelson and they still cheer for Hardy. Sympathetic Face Finlay isn’t working, we know he doesn’t feel pain. Finlay tries a sunset flip to escape so Regal headbutts him.

Striker’s been writing Regal one long love letter this match and that moment probably made him get a Regal face tattoo’d on his chest. Matt breaks up a pin-fall so Regal sends Matt outside the ring. Kofi makes the kinda-hot-tag instead and dismantles Cody with his peanut-butter smooth offence. Mark makes the tag, shrugs off Kofi’s offence and murders him with The World’s Strongest Slam.

Winners: Mark Henry, William Regal & Cody Rhodes (Nothing to this except for a lovely reminder of the Regal vs. Finlay wars of yesteryear and I’ve GIF’d the two best bits so you’re welcome.)

Overall: Show had some interesting bits if you’ve been following this week to week but if you’re looking for something to watch, give last week’s a browse instead for the sweet-arse Finlay vs. Matt match. ECW on Sci-Fi gets like this when there’s no title match to build to and they’re left being the sprouts on the Christmas dinner plate.