We’re in Columbus, OH with Matt Striker and Jim Ross (replacing Grisham) and we start with Morrison & Miz on the mic. Miz is furious at Evan Bourne’s win last week as even though it was a win for him, Miz was technically the more superior athlete. They should be headlining PPVs not babysitting newbies. Miz headlining a PPV? Haaaaa good one.

They start blaming Teddy Long for the New Superstar Initiative causing Teddy to walk out with that big dick swagger of his, pointing out if Bourne won then the NSI is successful. ”I’m sure Braden Walker is enjoying success in his future endeavours after just two matches.” How the hell did he turn into a meme THAT quickly. Morrison & Miz want a tag match tonight but Bourne isn’t here which causes further mocking until Ortiz comes out (to a dubiously large pop) and challenges them both. Morrison: ”Get in the ring, I’ll beat you without taking my glasses off.” Teddy makes a singles main event between Morrison and Miz with the winner taking on Ortiz. ”You can’t do that Teddy!” Fun opening segment with Morrison and Miz sounding serious as well as being able to joke around.

RAW REBOUND: Dramatic Recap of Bourne vs. Kane as Evan tried really hard but he’s 5 ft 8 and he’s Kane. Rey makes the save but gets beat up because he’s 5 ft 6 and he’s Kane.

Ortiz thanks Teddy for the opportunity and whips out his Rally Towel. Tiffany puts it around her neck and tries to act happy and there was less than zero reaction to any of this from the crowd so they were definitely pumping in fake audio during that opening segment. I’ve no idea what the point of Tiffany is.

Jesus, a Neely singles match? No Chavo tonight because he was getting choked by cameraman Undertaker on Smackdown and hasn’t been seen since in one of those moments people are probably tweeting at Cornette right now. 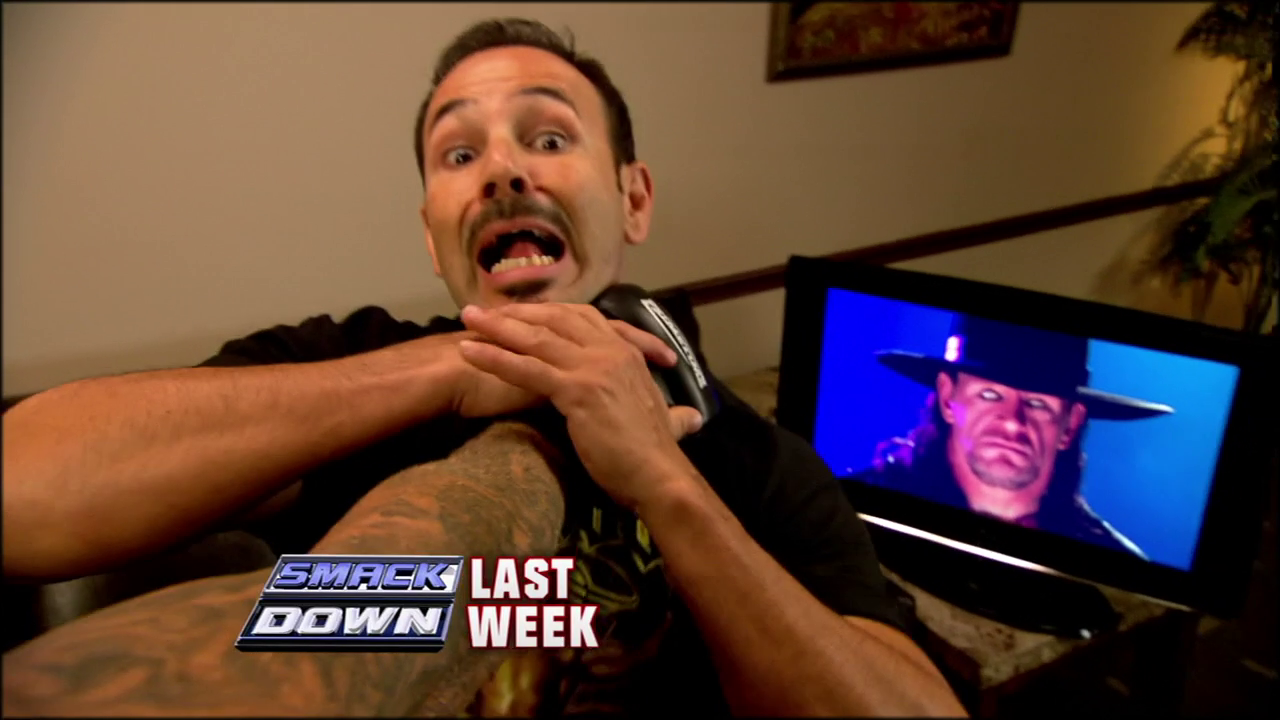 Winner: Finlay (Fit could have wrestled one of those anime fuck pillows and had the exact same match.)

Both Divas are from Smackdown and McCool is their champion and I have no idea why this is on the show. Striker talks about McCool being an inspiration to women everywhere but I’ve seen bottles of Irn Bru that were thicker than her waist so I hope not. Pretend grappling to begin until Maryse runs into a boot. McCool misses a baseball slide so Maryse launches her to the outside. Maryse poses for a bit and locks in an kinda-Camel Clutch as Ross disagrees with her strategy of mocking her opponent rather than finishing them off. Hey whatever works. McCool comes back with a Zack Gowen dropkick and flipping neckbreaker but gets thrown off the top rope and finished with the French Kiss, complete with a spectacularly cocky pin.

Winner: Michelle McCool (Nothing must-see but nothing embarrassing either. Maryse showed a lot of character and McCool showed her ribs.)

Mark Henry comes out and tells everyone he’s going to beat Matt Hardy so there. Thanks Mark.

Chase gets a few shots but Knox gives him a big boot, follows it with panting and sweating and finishes with Hard Knox.

As Knox makes his way to the back, Jack Swagger wanders out and casually gives the still-dead Chase a Doctor Bomb and smirks. This pisses off Tommy Dreamer who makes the save but Knox distracts him so Swagger gives Dreamer a Doctor Bomb too. Big booing from the crowd and Swagger has a feud three weeks into his debut. 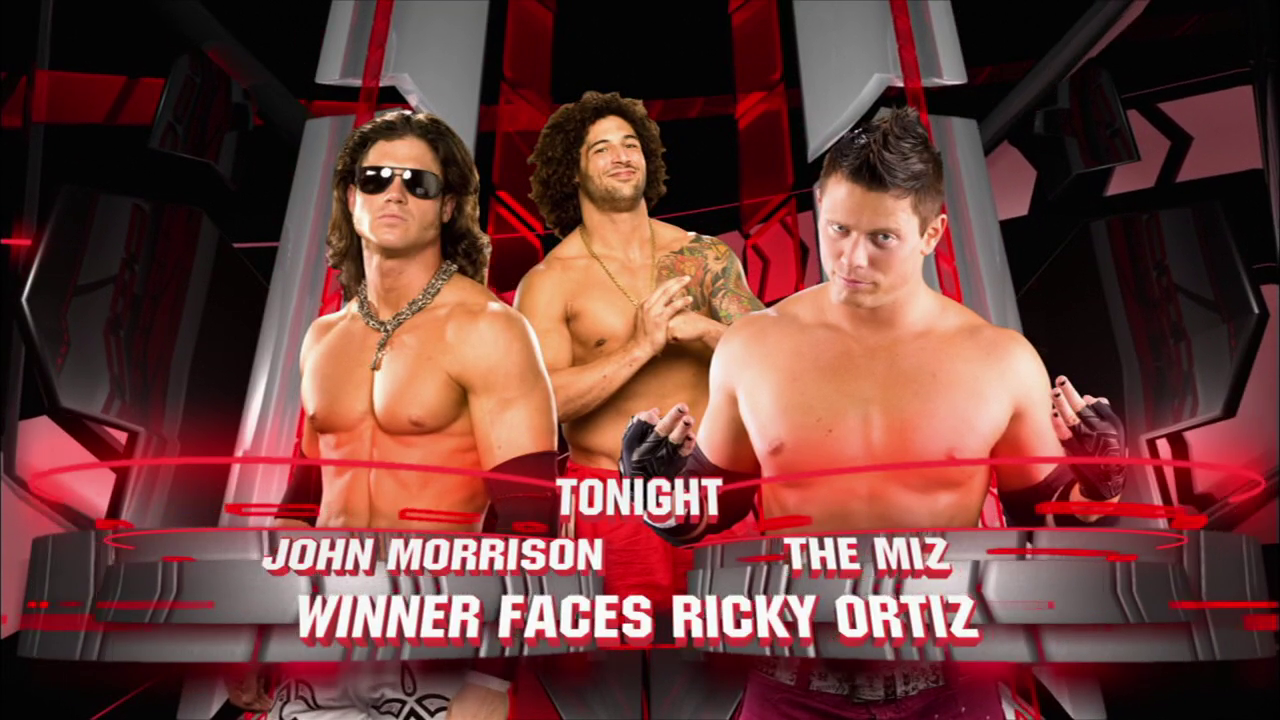 The Miz vs. John Morrison

They both grapple over ”who will be the Simon and who will be the Garfunkel” and keep it low-tech until Miz gets an inside cradle for two. They exchange pin-fall attempts until Morrison sends them both outside as we go to break.

When we’re back, Morrison escapes a chinlock by grabbing the ropes and getting an elevated kick from the apron. This picks up the pace as Morrison immediately locks in another chinlock. Miz connects with the corner clothesline and the crowd approves so we go to another chinlock. They’re not doing it as part of the match like HHH vs. HBK for the European Title either, they just love that move. Morrison misses Moonlight Drive but holds on and causes Miz to miss a clothesline and bonk into the ropes. OK that was something. Morrison attempts a Dirty Pin but the ref sees it. Morrison lands the Russian-Leg Sweep combo for two but then walks right into The Stroke. Miz then misses a big knee and lands the terrible springboard legdrop I hoped was a one-shot last week. Miz and Morrison go up top but both fall off an attempted neckbreaker and they’re both down…for ten and the match is a draw.

Ricky Ortiz buggers out and gives both men The Big O and then leaves. And that’s it.

Winner: no-one (So Teddy makes both men wrestle each other, they have a chinlock-infected first half which made me think ”oh they’re fucking with teddy” but then it turns out this was supposed to be a serious match, one that ended with a draw from a move that neither man has tried before. It would have been OK if Ricky had pinned both of them but shoving the luke-warm Ortiz as a fan favourite is too much, too soon without his tag partners Evan Bourne and Fake Crowd Noise.)

Overall: I have no idea what was up with this week’s episode but I’m assuming half the roster was elsewhere and they took the writers with them when they left. Knox squash, Neely singles match, first Divas match in months…when the highlight is a Braden Walker mention you know this is the worst episode of the year, skip this one.

And you know what, fuck it here’s a cheeky plug for me on Cultaholic too.