Knox still has welts on his face from last week’s tag match, courtesy of Matt Hardy (I’m pretty sure it was Finlay but it makes for a better story so illallowitmillslane.jpg)

Knox throws shoulderblocks and boots to keep Hardy down and follows with smothers and covers. Hardy connects with a Punk-esque bulldog out of the corner but runs right into a scoop powerslam. Hardy gets a small package for two but Knox knocks him down with a lariat. Hardy revs up the comeback with the second rope axe handle and attempts the Twist of Fate but Knox blocks so Matt goes ”fuck it” and DDTs him instead. Both men clothesline each other on the outside as we go to break.

When we return Knox is (surprise, surprise) chinlocking Hardy but when Matt escapes, he follows through with a dropkick. After Matt escapes from chinlock prison again, he goes up top for a moonsault and connects…but Knox acts like he missed and tries for a pin.

After that they return to Chinlock Sun and the crowd starts chanting for it wash away the rain. Hardy escapes the chinlock, gets his foot up on a charge and gets a Side Effect for two. Both men start swinging and it gets messy with Matt having to tell Knox what to do next but he manages to get a Tornado DDT without messing it up and ends with a Twist Of Fate.

Winner: Matt Hardy (Solid and sloppy like a post-Saturday night-out shite. Hardy was very over but without a blood-feud to hide the cracks Knox was back to being a generic big man, throwing chinlocks around like they were leftover steroids in his attic.)

Mark Henry was watching the match backstage, reminding Atlas that the only reason Hardy is the champion is because he won a Scramble Match and the only reason Henry didn’t win last week was because of Finlay and his stick. Simple and effective,like the majority of Henry’s stuff.

Evan Bourne vs. The Miz

Follow-up to last week’s Morrison vs. Bourne match that didn’t go Evan’s way. Striker describes that match as a ”Match Of The Year Candidate” which is a weird term to hear on WWE TV, especially to describe a match that absolutely wasn’t. Bourne evens the odds by having Ricky Ortiz in his corner and slaps Miz a bunch of times to set up a springboard Mexican Armdrag for two. Miz is able to avoid some slaps and punts Bourne outside like he’s John Eales. Morrison goes to do something but Ortiz stares him down so he can only throw insults. ”Give Carlito his hair back!” Miz launches Bourne into the barricade and applies a leg-and-arm submission that not even Striker knows the name of. Nice to see guys not relying on the chinlock. Bourne’s able to turn it into a roll-up but Miz counters and tries for a Dirty Pin so he clotheslines the synthetic weed out of him instead. Striker asks Grisham if he plays any instrument ”apart from the obvious” which confuses Grisham. And me. Is the answer supposed to be ”the meat flute?” or am I missing the right banter? Anyhoo Bourne gets sick of Miz’s offence so a high kick to the head sets up a running frankensteiner followed by a standing moonsault because he’s slicker than buttered piss. Miz hurls him off the top rope and shows off his own 205 Live offence.

Morrison yanks Bourne’s legs out from under him but Ortiz nails him at ringside distracting Miz and causing him to get rolled-up by Bourne.

Winner: Evan Bourne (Much better than last week with Bourne showing (gasp) intelligence by having someone back him up after losing due to interference. Bourne can flip but if he’s a dumb-dumb then no-one’s going to give a damn about him so good times here.)

RAW REBOUND: New Champ Chris Jericho vs. CM Punk in a steel cage. I have no memory of this, I thought Punk lost at Unforgiven then buggered off for a bit. Anyway, Punk slams Jericho with the cage door and sends him outside for Jericho to retain and somehow Punk was a failure as champ in 2008. 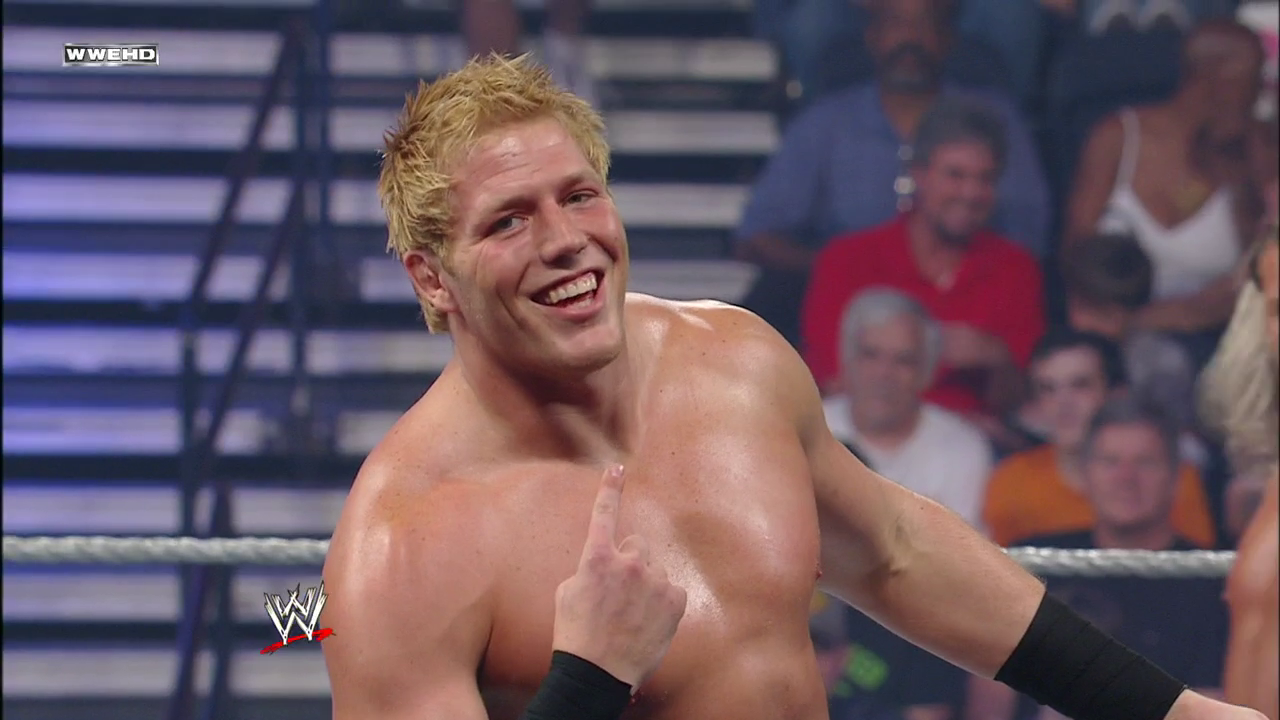 Swagger still has generic gear and music but the dopey grin he’d wear for the next decade makes it’s debut tonight. Chase Stevens was one of The Naturals in TNA and had a good run that fizzled out after the Team 3D feud. Surprised they didn’t have a run elsewhere but I guess in 2008 their options were jobbers in WWE or semi-finalists in Zandig’s Tournament Of Death. Swagger bounces him around with amateur slams and finishes with the Red White And Blue Thunder Bomb. 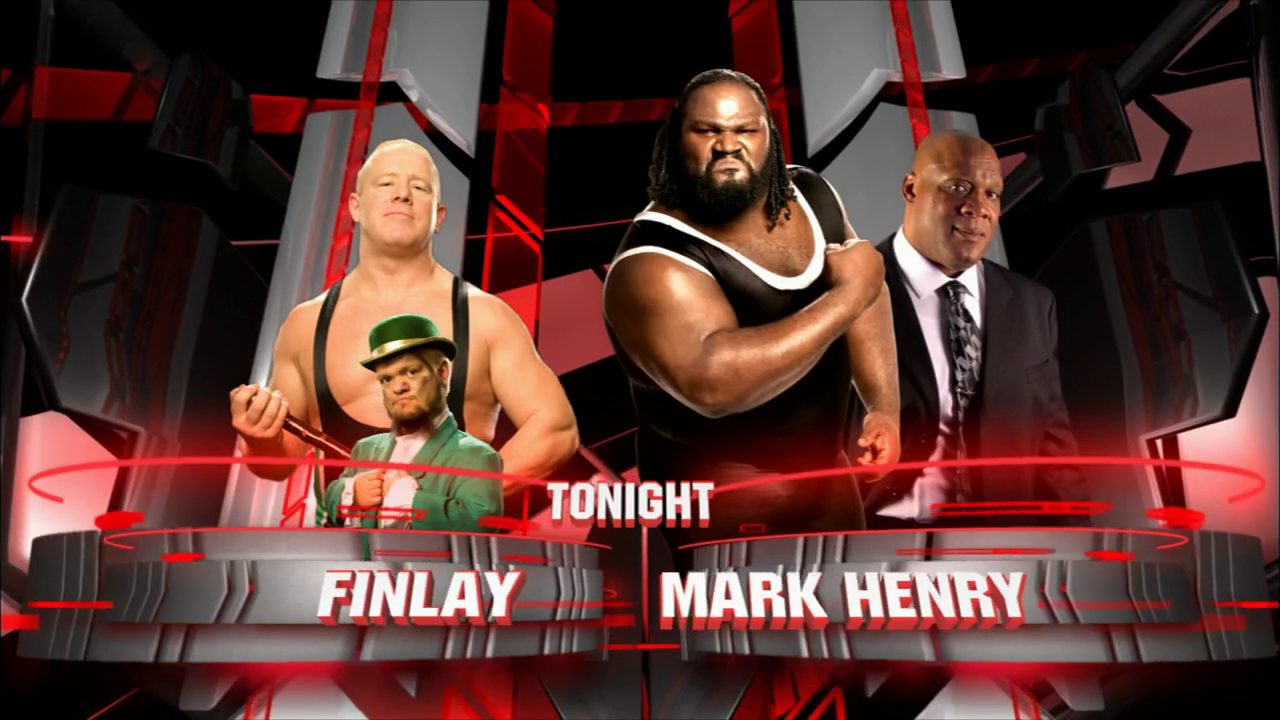 We get clips of Henry getting dunked on over the last few weeks, so if you encounter a Henry in the wild you should only hit him in the head if you have the Irish Stick equipped. Both men measure each other out as they’re both mack trucks and reluctant to dive in. Striker kills the big mood by explaining Finlay’s name comes from Grisham’s ”favourite language, gay-lick.” Striker isn’t anywhere near the level to be mocking Grisham, he’s like Cartman picking on Pip. Finlay attempts a standing armbar but Henry shoves him off and into the corner. Henry causally slams Fit but doesn’t follow up so Finlay gets some jumping fists onto Henry’s hard head but Mark halts a charge with his width. Henry distracts the ref so Atlas can get a shot on the outside and Henry sends Finlay off the apron and bouncing off the table like in No Mercy 64.

When we return from break, Henry is alternating between nerve pinches and pin-fall attempts to keep Finlay down. It’s a good strategy but Fit is too scary for the crowd to start chanting for so it’s mostly silence. Henry starts spamming the scoop slams but misses an elbow drop so Finlay wraps the apron cover over his face. Atlas shoves Hornswoggle at ringside and Finlay gets pissed and whacks the Shillelagh around Henry’s left arm. Finlay goes to work on the arm, including a crazy old man dropkick. Finlay counters a bearhug to a sunset flip and nearly ends up a Finlay sandwich.

Unsure if that was close timing or luck. Finlay gets a quick DDT and there’s a blatant edit on the pin-fall attempt as judging by the crowd reaction, Henry forgot to kick out. Commentators talk about the controversy as Finlay bounces off Henry with the Earthquake Splash. Finlay attempts a Fujiwara but Henry shoves him into the corner again and finishes with the World’s Strongest Slam.

Winner: Mark Henry (The parts where the manly men were manhandling each other was fun but it turned into a right dog’s dinner during the second half and felt like they were making it up as they were going along with the finish coming out of nowhere. Hopefully a dress rehearsal for something better later.)

Overall: Passable episode compared to previous weeks with nothing bad but nothing great either. Perfectly cromulant with Miz vs. Bourne as the highlight and Swagger’s grin as the runner up. 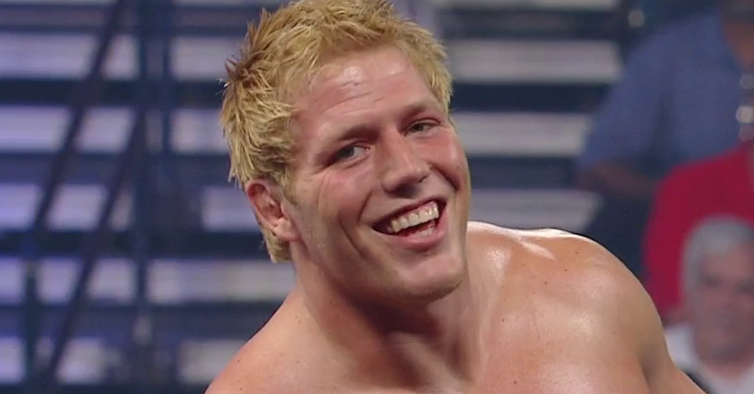