Last week’s edition got a lot of views (probably because of the click-bait title of The One That Got A Ref Fired) so let’s continue with The One After Summerslam 2008 (oh boy I can smell the hits already.) 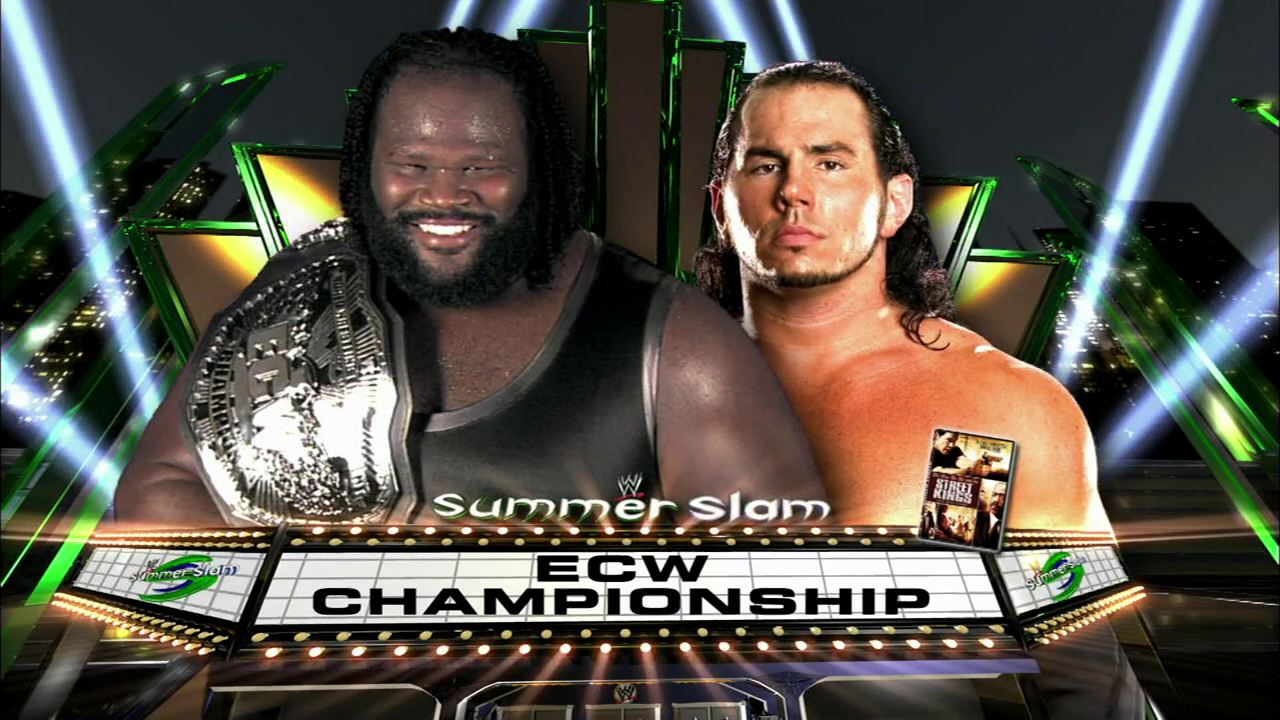 Striker points out Matt has never won a major singles title but WWE would change their minds about referring to the (new) ECW Title as a world one or not to make new WWE/World champs (like Swagger) sound more important. Or maybe they forgot he held it. ”We call him the World’s Strongest Man because he is.” Thanks for clarifying Grisham. Matt starts off clubbering but it has no effect on Mark so Matt gives him a Twist Of Fate in less than thirty seconds but Tony Atlas pulls him out for the DQ.

Jeff makes the save and gives Atlas a swanton off the apron and helps his brother double suplex Henry on the outside.

Crazy’s first appearance on the ECW brand since One Night Stand 2006, he was on house shows and Heat all this time (apart from that one time he pinned Kennedy). Dreamer is still playing ”that guy from ECW that can still go” here and given he was playing it at All In this past weekend he’ll probably be doing it when Wrestlemania finally takes place on the moon. Morrison and his Dragon Gate body start off with Crazy and they go through a nice series of lucha bits despite Crazy now having to wear a shirt. Lucha guys don’t lose their ability, they just get fat. Morrison and Miz attempt to double-team Bourne but Miz gets a Frankensteiner off the top instead. Luckily Bam is there to trip him up so they can re-gain the advantage. Everyone of the baddies (known as ”heels”) beat down the newcomer while Grisham puts over Miz’s poetry. Bourne gets the hot tag to Tommy who takes down everyone with basic moves as the crowd goes nuts. Scoop slam! Bulldog!! It turns into a big brawl with everyone getting sent to the outside so Crazy can connect with a beautiful dive and Bourne follows with an even more beautiful moonsault. Miz drags Dreamer into the ring and finishes with a neckbreaker (think it was supposed to be the Mizard Of Oz but it ended up being a normal-ass neckbreaker.) 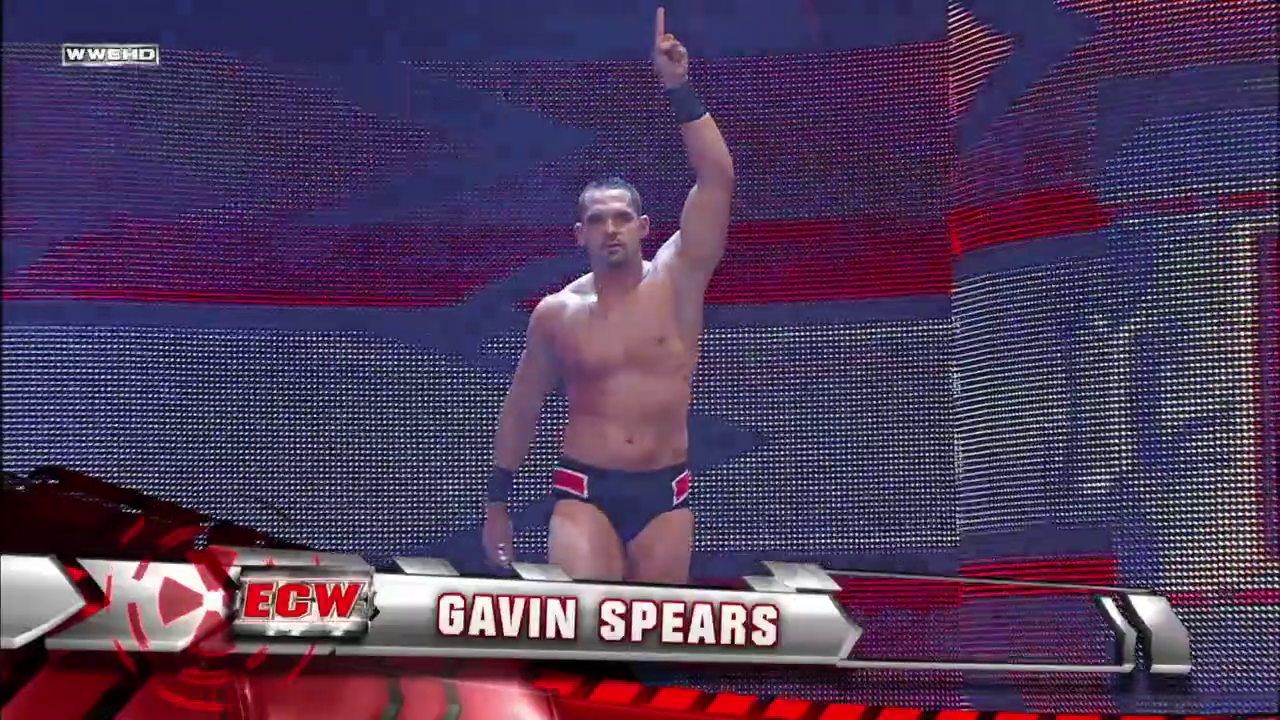 The undramatic in-ring debut of Tye Dillinger! He gets music and titantron so I assume he’s part of the New Talent Initiative but he’s been given no introduction so I assume he’s a last minute fill-in for Braden Walker. He gets an in-window promo explaining he doesn’t need catchphrases or a t-shirt to get over. Well he has both in 2018 and he’s not over so he’s right. Ortiz is still undefeated and there’s some rally towels in the crowd and a few fan signs. A bit of nothing happens until Spears gets a neckbreaker for two, making Ortiz stronger than Dreamer. Spears gets a dodgy choke and the crowd are actually getting behind Ortiz. In fairness he looks like Veleveteen Dream next to Spears, who kicks out of an over-the-shoulder slam. Shoulder block off the top sets up The Big O splash and win.

Winner: Ricky Ortiz (Ricky is slowly getting over as long as he’s in the ring with guys worse than him. Tye was sadly unremarkable but has the distinction of being in both NXT and ECW on Sci-Fi along with Tyson Kidd & Natalya.)

Finlay talks smack about ”that big bearded, cross-eyed guy” Mike Knox until he walks out. Finlay dares him to step in the ring but Knox says he’ll do it when HE feels like it. Finlay isn’t impressed so he runs out and double-legs the big goof on the concrete floor and beats the fuck out of him until the road agents (including IRS and Malenko) separate the pair of them. That was a cool brawl for this brand but so far it’s been like the Dempsey/Corbin feud that I guess was supposed to make both look like beasts but only Corbin ended up with any credibility.

Long recap of Jericho accidentally hitting HBK’s wife in the face and raising this feud from ”good” to ”OH SHIIIIIT”. 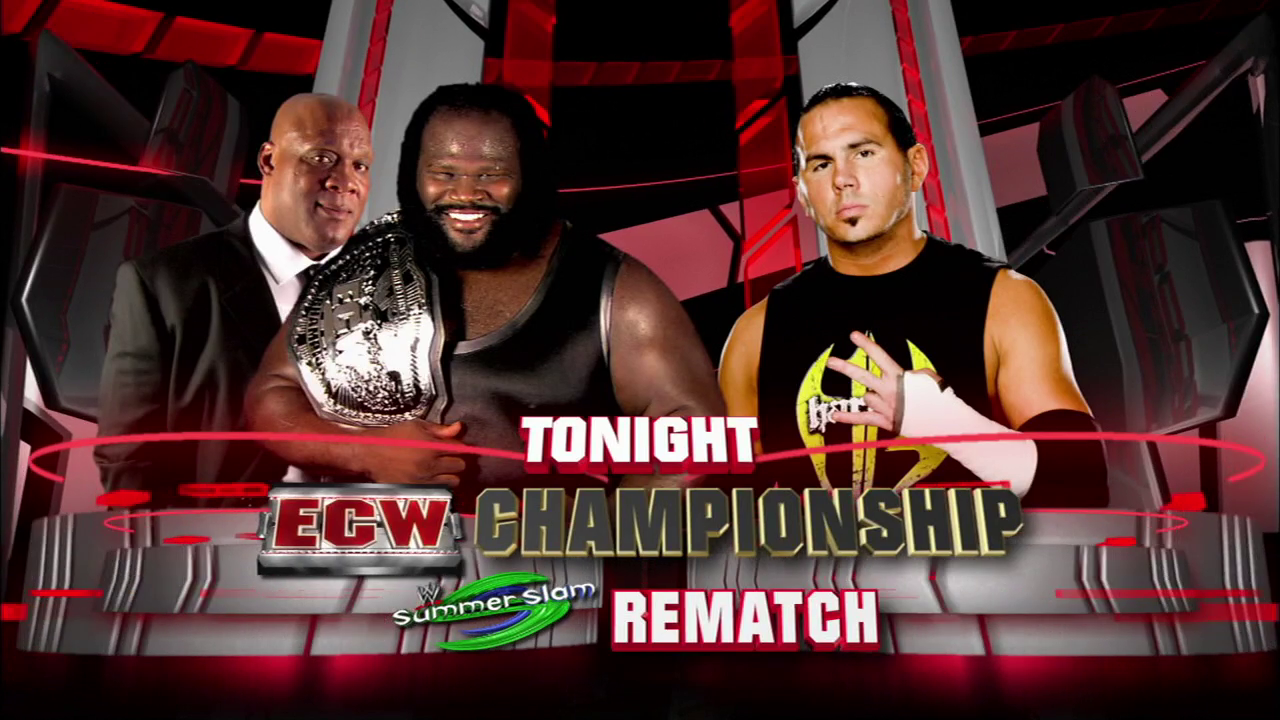 Weirdly the ECW Title matches have more importance on TV than on PPV as the crowd may be here for Smackdown but they’re a lot more invested in the matches than the PPV crowds where the matches are presented as piss breaks. Matt starts slapping away and tries for the Twist of Fate but Henry knows it’s coming so he launches Matt across the ring instead. Matt heads outside and works over Henry’s legs by yanking them. Hardy has the advantage while Henry is grounded but sadly for him he stands up. Henry slams Hardy but misses a follow-up elbow drop so Matt works on him again. Whenever Henry is vertical, he can’t be stopped. Matt attempts another Twist so Henry sends him out the ring and into the advert break. When we return, Henry has Matt in a fearsome er nerve pinch. After Atlas gets a sneak attack, Henry squishes Matt with a bearhug as the crowd goes nuts. Matt prevents a full-nelson being applied but gets knocked down and press slammed. Henry misses the splash and Hardy makes a crowd-fuelled comeback. Seriously, fans are going nuts for his second-rope elbow and bulldog. Only gets two though. Matt goes up top for a crossbody and the crowd is BANANA as it connects. Matt blocks the Strongest Slam with a Twist of Fate but Tony pulls him out the ring again. Matt runs him off and attempts a moonsault that meets nothing but knees and Henry ends it with the World’s Strongest Slam.

Winner and still ECW Champion: Mark Henry (Really well-put together match which expanded on the Dreamer/Henry chemistry but with someone with more interesting moves and fans. Crowd were ready for a title change and this series really helped Henry’s credibility as a champion.)

Overall: Fine and dandy with the right people getting a chance to look good. Even Bam can’t fuck this show up.

I’ve been co-opted Maffew, here to tell you All In and Starrcast were amazing and the only thing that can compare is Manchester Mediacon, this weekend if you’re in the Manchester area. See you there, mine’s a rum & coke.

oh wait when this goes live it’ll be finished. ah whatever.