We’re in Charlotte, North Carolina and it’s Miz & Morrison vs. The Hardy Boyz for no reason!

ECW Champion Mark Henry (accompanied by Tony Atlas) gets interviewed by Tazz. Tony explains when Henry offered to give Tony a payday to carry his bags, he decided he’d be OK with that if that guy was The World’s Strongest Champion. Tony brings a load of frying pans (”like the one your mother has”) and asks for a fan to attempt to bend one to prove it’s not been tampered with. A guy named Chad Copley enters the ring (hopefully not this Chad Copley from nearby Raleigh) and tries his best but can’t bend it. Henry smothers it like Lenny stroking Curley’s wife.

Tommy Dreamer (Henry’s opponent this Sunday at The Bash) shows up and promises he won’t hit Henry, he wants to try bending a pan as he’s been working out. Henry and Atlas laugh at he attempts to use a frying pan for something other than frying bacon so Dreamer bashes a pan over Henry’s head and runs off. Nice old-school style segment and I always enjoy when a heel-turn gets a reason other than I DON’T OWE YOU AN EXPLANATION I NEVER LIKED YOU. Of course it wasn’t that old-school if Dreamer was able to hurt a black man’s head but you know what I mean.

Oh yeah, I forgot about Moore. Apparently Wang Yang was suspended for wellness violation at this time so lucky Moore gets the opportunity to be bounced around. Moore takes a beating but manages to get a quick Frankensteiner off the top but Knox shrugs it off like it’s an accusation of left-over steroids in his attic and puts away Moore with Hard Knox.

Winner: Mike Knox (Highlight was the crowd repeatedly yelling ”Hooooo!!” at Knox loud enough to be heard on TV.)

RAW RECAP: Shane and Steph ask for the roster to work together, interspersed with clips of JBL trying to kill Cena with his car.

Evan gets another in-set promo, sounding like he was a M16 pointing at his head. Some good lucha sequence to begin as both men fight over a monkey flip. Evan tries something off the top but Chavo shoves him off and he splats on the outside. Bourne escapes a lazy armbar to kick Chavo and to springboard off the ropes and THEN adds a standing moonsault. Bourne was a machine. Chavo attempts a Vader Bomb but lands on knees so Bourne finishes with the Shooting Star Press.

Winner: Evan Bourne (Bourne continues to impress with his athleticism and is getting bigger reactions every week. Bam Neeley did nothing and continues to be the most consistent member of the roster.)

Backstage Tony & Henry reassure Colin Delaney he has nothing to worry about as they know he had nothing to do with the pan attack earlier. Colin is glad to hear that until Henry crushes him and press slams him onto a box.

RAW RECAP (1): Kane challenges Punk for the title and retains via count-out so Kane freaks out again and attempts to Pillmanise Punk’s neck but Batista makes the save. Punk offers a handshake to Dave (”we’ll both be involved in Guardians Of The Galaxy later!”) but he’s only interested in the title so he declines. Punk pushes him and Dave plants him with a spinebuster and the size difference between the two is insane. I love Punk but I can imagine Vince throwing his headset shouting ARE YOU FUCKING KIDDING ME upon seeing Punk next to Batista.

The Hardy Boyz vs. John Morrison & The Miz 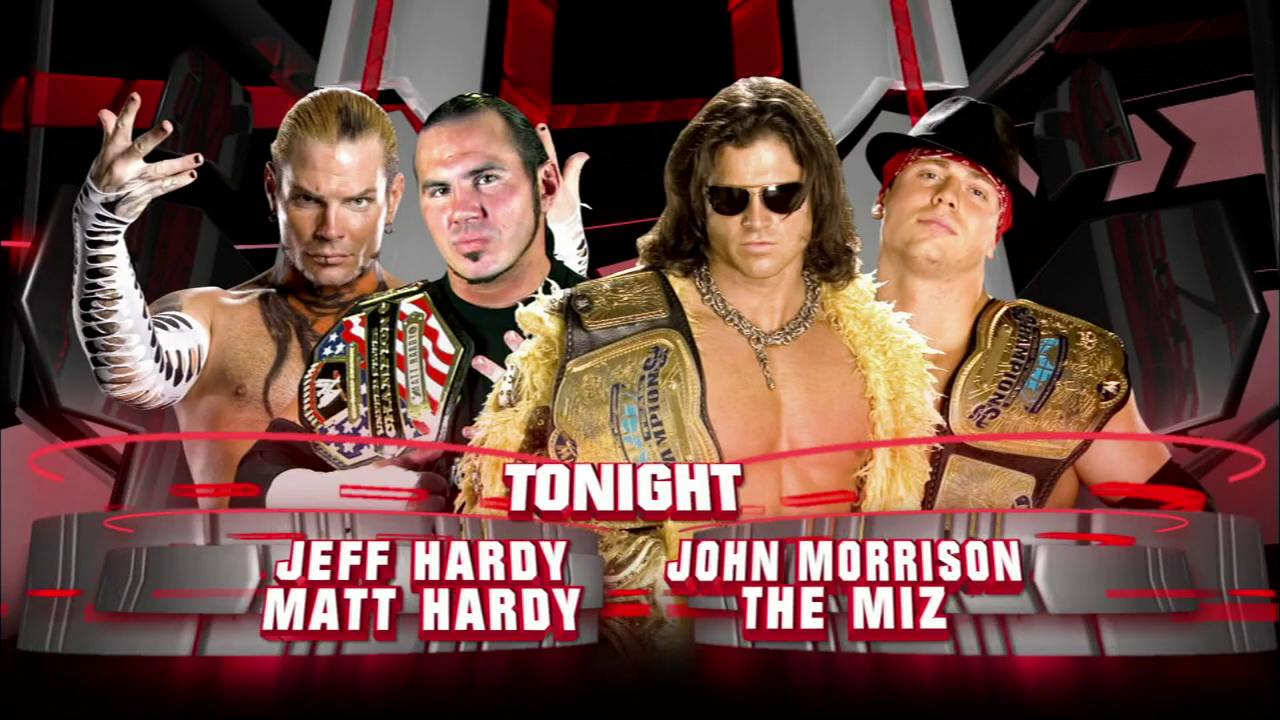 They say this is ”one night only” as we’re in NC and Flair’s retired so someone local’s got to do something. I know MNM and Hardys had a bunch of ”one night only” matches but AFAIK Miz & Morrison didn’t have many (if any) other matches with them so they may be right this time! Matt & Miz starts off and the battle of flashy pants is won by Matt and both men tag out to their partners. Jeff nails Morrison with the leg-drop-to-the-groin-that’s-not-a-low-blow and both Hardys nail the double-team wheelbarrow suplex. Miz tries to nail Matt but only distracts him so Morrison gets the advantage. Matt counters a powerbomb with a Russian Leg Sweep to tag in Jeff and the crowd is going BANANA for everything he does, only amplified by him beating up The Miz. Poetry In Motion connects but Morrison pulls his partner outside so Jeff can’t get the Swanton Bomb.

Back from break, Morrison is chinlocking the paint out of Jeff’s hair. Miz tags in but misses the corner clothesline however Morrison is right there to continue wearing down Jeff so he can’t make the tag. Morrison & Miz were machines when they got the chance to have Big Ass Matches like this. Jeff nearly makes the tag but Miz runs across the ring to knock Matt off the apron. Miz tries a backdrop off the top but Jeff elbows him off and lands Whisper In The Wind (not named by Tazz or Adamle) and Jeff finally makes the hot tag to Matt who clotheslines Morrison into the Jannetty Bump.

Matt is able to take Morrison down with a bulldog while clotheslining Miz off the apron because he’s feeling it. Morrison goes for a move off the top but Matt turns it into a Splash Mountain that is halted by Miz. Matt gives Miz the Side Effect, Morrison gets the Starship Pain on Matt and while he’s still down, Jeff gets the Swanton off the top and that’s enough to end it.

Winners: The Hardy Boyz (I’ve typed it up before but Miz & Morrison combined the best of both old-school tag wrestler with new fancy moves and mixed them together smoother than peanut butter. Obviously this meant they gelled well with The Hardys and I’m sure these guys were told ”go out there and have a fifteen minute match” and made it look easy. Great stuff here, even if it meant nothing in the long run.)

Overall: Finally a fine episode with nothing bad on it (don’t worry, Braden Walker returns soon) as ECW on Sci-Fi finds it’s tempo. The Bash is this weekend so I’ll recap it next week but that’s all I’ve got so take care and follow me on twitter.