We’re in Baton Rouge, LA and to correct my glaring error last week, Kofi Kingston got drafted the week before winning the IC Title from Jericho so he’s gone which is good for his career but sucks for ECW on Sci-Fi as the feud with Shelton Benjamin and partnership with Evan Bourne had been the highlight of the year for the brand so let’s see what’s going to fill the gap. 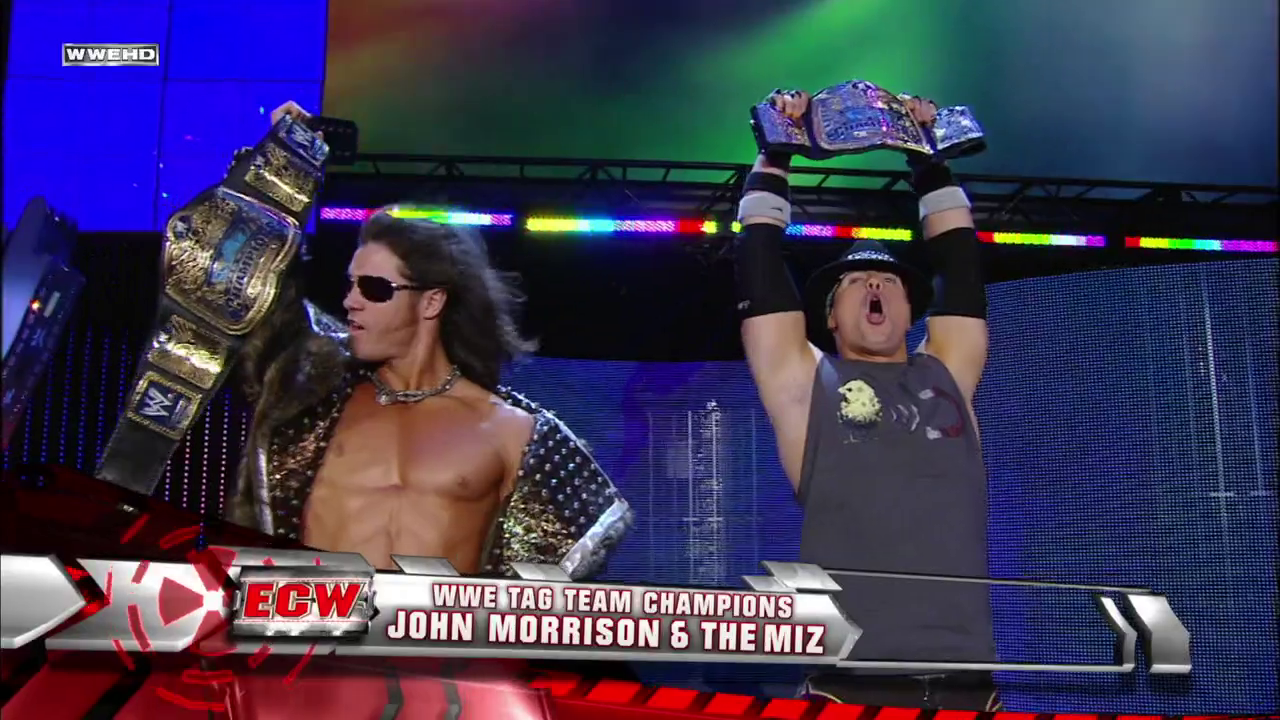 Miz & Morrison start the show. ”We know you ladies would rather have our bodies than our words but please try to keep quiet while we introduce ourselves.” They brag about running out of competition and having the highest-rated show on WWE dot com until Finlay interrupts to talk shite. Morrison has none of it (”alright Mr. Loves To Fight Because He Can’t Wrestle”) but Hornswoggle ruins everything with a super soaker and sends Mizzison running. After a few months of doing fuck-all, the tag champs are back to looking and sounding like main eventers again.

The Miz vs. Finlay

Winner: Finlay (Well-done multi-man finish aside, this felt like one step forward and two steps back for the Tag Champions who defeated the un-hyped Finlay & Hornswoggle at NOC two weeks ago and the solution to the real problem of a lack of tag teams is…Finlay & Hornswoggle again. The only thing more bizarre than Hornswoggle as a tag title contender is Finlay as a loving father and jolly old man.)

Backstage Tiffany tries to suggest something to Teddy to justify her employment but Armando interrupts to beg for his job again. AND KNOCK KNOCK WHO’S THERE BRADEN WALKER makes his debut.

Braden promises to bash his brains in (bash them RIGHT THE FUCK IN, WENDY) and according to Bruce Pritchard, this was the promo Vince McMahon walked in on and immediately demanded to know who the hell hired Braden Walker. Lots of people were asking that question.

RAW RECAP: Batista won a Fatal Four Way to decide who gets Punk at The Great American Bash, causing Kane to get salty and beat up Jerry Lawler. It’s Kane so WWE’s video editing software automatically ”selects all” on the after effects screen. 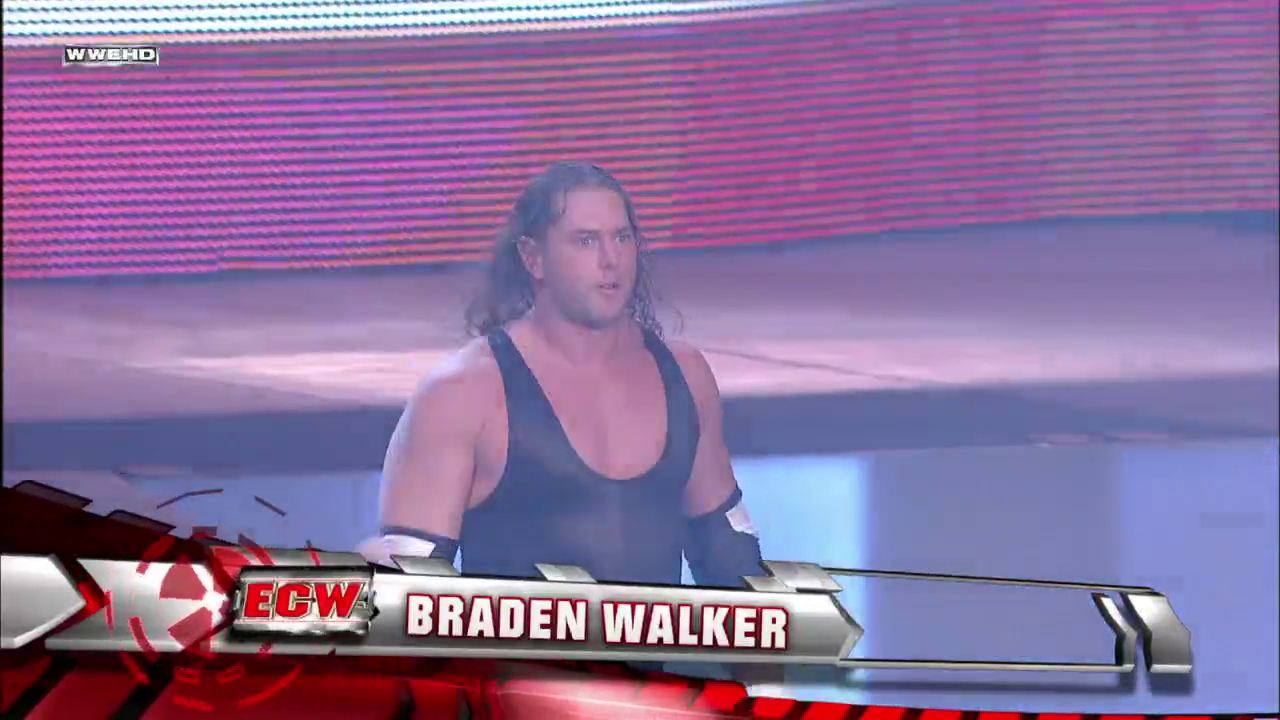 No reaction at all to Braden who I’d like to remind younger readers was once part of America’s Most Wanted in TNA and were capable of getting good matches out of literally anybody. That was when he was in shape and not wearing a generic black singlet though. He connects with a fireman’s carry and a hiptoss. Armando clotheslines Braden down and he has to yell at the crowd to get something out of them as they’re totally mute. Armando alternates between hitting Walker and shouting PLEASE REACT and DON’T GO, SMACKDOWN IS ON AFTER THIS to the crowd. Armando pulls his hair and the ref admonishes him because it highlights his bald spot. Braden counters a suplex and lands Uncle Slam for two. Some flying clotheslines and ”aaah!!”-ing and Braden finishes with a crossbody off the top as Adamle compares him to SHAWN FUCKING MICHAELS, presumably meaning the gay porn star.

Winners: Fans of bad wrestling jokes (If you told someone who watched this that Walker was one of the highlights of TNA (for years!) they’d laugh in your face. Despite his experience, Walker looked just as green as Ortiz did last week but without the look or charisma. I’m sure this is just a stutter step and he’ll improve though.)

Backstage, Teddy Long meets a returning Tony Atlas who is here to enjoy the show. Teddy wants Atlas to say hello to the crowd later on but Henry shows up to mock Atlas for only benching 650. Henry appearing backstage got a louder pop than anything on the show so far.

Atlas Ortiz is interviewed backstage and officially changes his name to Ricky Ortiz. In fairness it’s very easy to get him at Tony mixed up. Ricky brags about being un-defeated after one match and Lena Yada has nothing to say and that’s your segment.

Bourne gets a shot-in-shot promo as he makes his entrance but sadly shows none of the weirdness he’d go onto demonstrate in real life (”I went to the jungle and became an actual panther.”) Adamle calls Nunzio a two-time ECW Champion and Tazz corrects him, not wanting to show any disrespect to his ”fellow goomba from the hood.” Tazz resembles a goomba from Super Mario Bros. more than a New Yawker. Bourne shows off a quick headscissors and flying kick to pop the crowd. It’s the first time in years Nunzio is the same size as his opponent so he applies a backbreaker submission knowing it’ll be the last one he’ll get to apply on TV. Bourne starts popping off Frankensteiners and flying knees before ending it with a Shooting Star Press to restart the crowd’s heart.

Winner: Evan Bourne (Bourne’s taken Kofi’s place as the flippy cool dude on the show and the crowd ate everything he served them. I think they shot themselves in the foot somewhat by having Bourne show up THEN having the green/shite newcomers appear after him as Bourne’s so immediately impressive.)

Henry mocks Atlas doing the ring announcing for the main event for a pay-cheque and offers to give Atlas some money to carry his bags after the show. 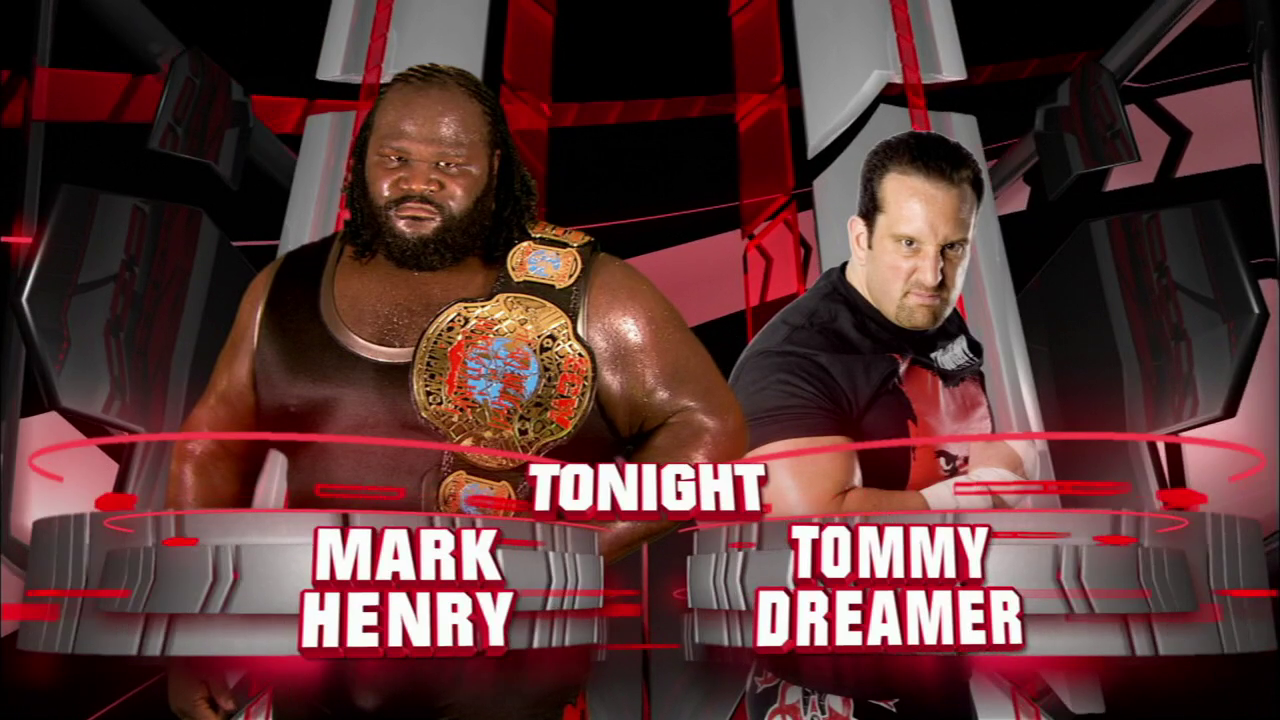 Henry pie-faces Tommy to start but Dreamer has that undying ECW spirit so he strikes back to the shock of Henry. Doesn’t last long as Henry body-blocks him (”like running into a concrete wall!”) and Henry tries to tell the ref the match is over. This allows Tommy to stand up and get some more shots in but Henry effortlessly slams him down and drops an elbow, all the while acting like it’s nothing. Colin grabs Henry’s foot so Mark goes outside to consume Colin for the protein. Atlas steps in to save Colin’s life but SWERVE Atlas sends him into the announce table. Tommy tries to save Colin but takes a World’s Strongest Slam on the outside to die a horrible, horrible death.

Winner: Double Count Out (Tommy and Henry showed glimpses of chemistry here during this brief match that resembled the George Newman vs. Paul Newman fight from Cool Hand Luke. Atlas celebrates with Henry and NEVER MIND THAT this is the episode where Tommy shit himself for real so here’s Dreamer’s post from a few days later:

This, my friends, is a real shocker. When Mark Henry slammed me on the floor two weeks ago, as I rolled over to check on Colin Delaney, I asked him if he was OK … then I smelled a horrible smell. I asked Colin if he had farted because it was bad. He, in return, said, “I thought it was you.” Then as I was still on the floor, I began to think, was I so disrespected that I just got the World’s Strongest fart dropped on me? Does Mark Henry really hate me so much that he would slam me on the floor and poop on me? What about Tony Atlas? Did he drop a bomb on Colin and me? He does look like he still eats a lot of protein. I was really angry and went to the back to calm down. This took about 10 minutes or so, and I took a shower. However, when I went to put my clothes away, my underwear in particular, I thought I had sat on a brownie. It was I who had the **** knocked out of me both literally and figuratively. “The force of the slam knocked the **** out of you” is what the attending physician had said. I have had a lot of things happen to me in wrestling, but never this. Why the hell didn’t I know it was me? Now that, my friends, is an extreme mystery. 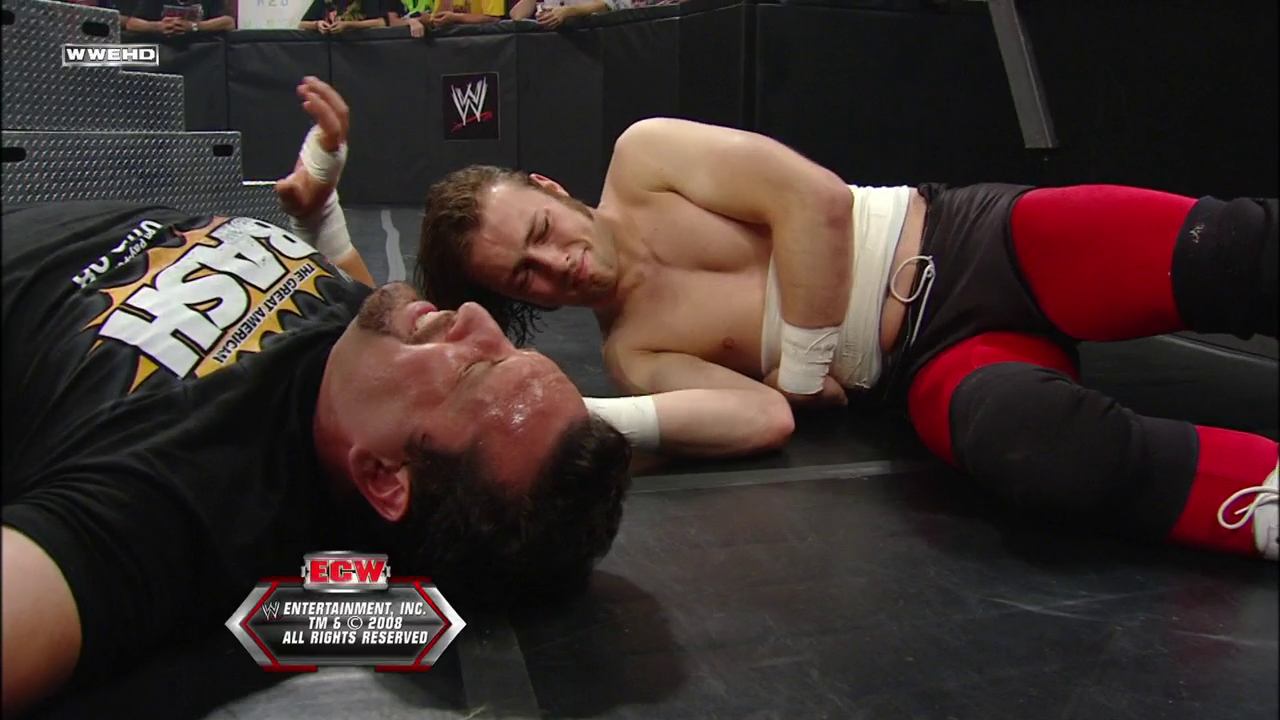 Overall: Miz, Morrison, Bourne and Henry are all looking and sounding great but it’ll be nicer once the show catches up to them. Worth a watch for the human car crash that was Braden Walker though.